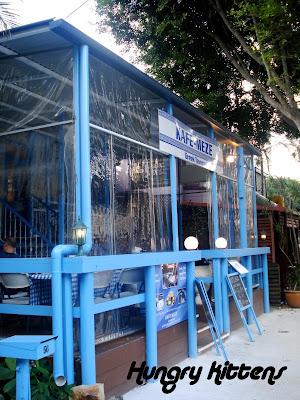 Now that I don't go to uni in the city, I only go there to transfer buses. An exception was sometime last week where I tried to organize a change of name certificate. Why? Long story short, I need to get a new passport because I'm going to Shanghai in September. I have a current, unexpired Australian passport but for reasons unbeknown to myself, this is insufficient proof of who I am. Or something. So I need more paperwork. This kind of admin BS makes my blood boil but in the words of my mum's boss 'People out there just need to make their existence justified'.

While I was in the city, I thought I'd make a vacation out of it so my friend Hien and I decided to grab lunch nearby. I suggested West End and used the time I spent waiting in the Births, Deaths and Marriages queue to Google inspirations for where I wanted to eat. I was leaning towards Greek and tossing up between Lefkas and the Little Greek Taverna. 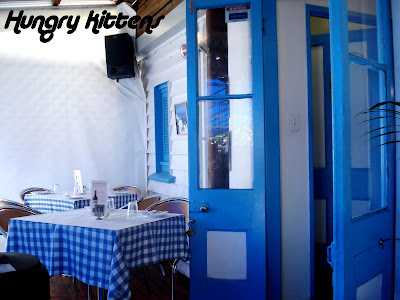 When Hien picked me up, he stated that he already had a place in mind and would refuse any other suggestion. That outcome didn't even occur to me. I have this selfish expectation that my food destination is purely a product of my own choosing. In any case, his pick was Kafe Meze, which is also Greek so we were happy all round.


I THINK I've had food at Kafe Meze before it moved twice. Don't quote me on that. It was either that experience or some review or just bad vibes that made me never want to try it. Hien has rec'd it a million and one times but I had it backlogged as a 'nah'. This turned out to be to my own detriment because I LOVED this place and would recommend it to anyone. Read on for why.

There's something about the outside that I don't like the look of. Maybe the plastic sheets? Whatever it may be, I forgot the instant I walked in. It was like walking into a house. Back in my days of dreaming about opening my own restaurant, I spawned the concept of creating one that felt like being in someone's home. I won't claim that's an original idea. Joseph Alexanders, Two Small Rooms and Brents all have the home-vibe going, but all the same, I think it's a warming idea and Kafe Meze does it well.

We walked past a long table in a room just like my dining room at home and I think it'd be a great place to host a birthday dinner. 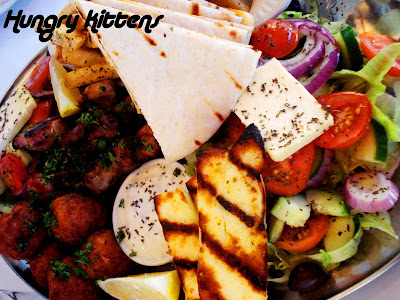 The lunch menu has a lot of Greek favorites but what we were instantly drawn towards was their meze platters. There's a seafood platter, meat platter or a hot box with warm Greek dishes like moussaka. I was very tempted to order the hot box but we ended up getting a meat meze platter to share. They are recommended for 2 people.

There wasn't a long wait on the food at all. It's a decent serving, not so huge that it threatens to burst out of your stomach post-eating but definitely enough between us. MAYBE two really hungry rugby players would want to order another side but then again I could be greatly overestimating how much humans eat these days. Don't you think appetites on a whole are getting smaller? Am I crazy? 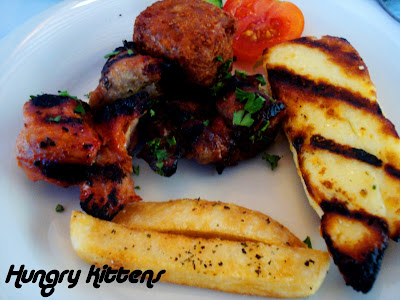 My plate of meze

Alright... so... the food. Souvlaki? Good. Dips? Good (very garlicky). Haloumi? Is it ever not good? Weird fried meatball crunchy things... (from process of elimination I guess they're the keftedes)? REALLY good. Likewise with the chips.

Look, let's be honest here. It's not 'gourmet'. It's not fancy shmancy. But it's good, comforting, fresh food with true flavors. And there's a generous helping too. And it was pretty easy on the pocket (though Hien warns me that the price near doubles at night). 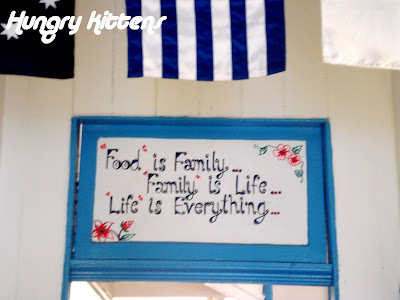 Would I go back? Hells yes! Probably soon. And I will also stop asking myself questions and answering them (I know it's very annoying, but it's one of 'those' nights. I'm tired and my writing suffers).
Labels: Casual Dining, CBD and Surroundings, Dining Out, Favorite Restaurants, Greek Restaurants