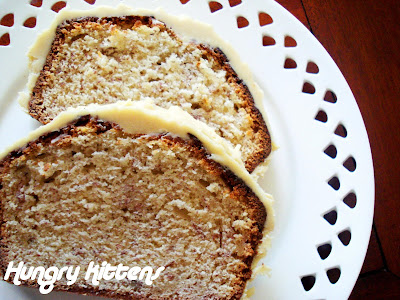 It seems like barely a few days ago when this semester of uni started but in reality, it's been over a month and I've already finished my first clinical rotation. I loved it there and the only bad part (which is really a good part) was that most days, someone would have brought along a cake or some sweets for everyone to share. Other days, my classmates might run out and bring back $5 worth of chips (don't let that small figure fool you, it would be a MOUNTAIN), which was equally as bad in its goodness. 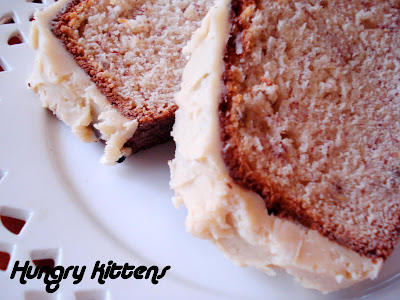 On our last day there, we took these teatime traditions to the next level. Each of us who were there on placement were to bring along a food item. I took this as a chance to bake something fun.

At this point in time, I can't put my finger on how the idea came about. Maybe I was looking up mud cake and found one that I could put banana in? I should point out that I had a hand of ripe bananas as my disposal hence keenness on banana-flavoring. I bought all the ingredients minus butter, being certain that I had butter at home. After a mad fridge search, I discovered that I only had around 50g of butter. I cursed myself, thinking "I should have just bought a packet mix!!"

The Gods were smiling upon me that evening because a miracle happened. Somehow, I clicked upon a recipe that used shortening. SHORTENING! I bought some Copha (vegetable shortening) ages ago and have since only used a measly amount in one recipe. I couldn't believe my luck that this obscure/useless ingredient was actually the key ingredient in a recipe for exactly what I wanted to bake.

The recipe for the cake is from here and I also whipped up a caramel frosting to make it that bit more decadent. I poured the batter into 2 large loaf pans.

Ingredients
For the frosting
Procedure: 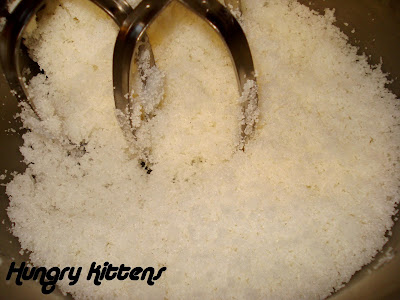 2. In a large bowl, cream shortening and sugar until light and fluffy.
3. Add eggs, one at a time, beating will after each addition. 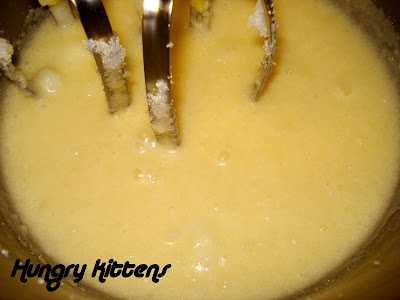 4. Beat in bananas and vanilla. 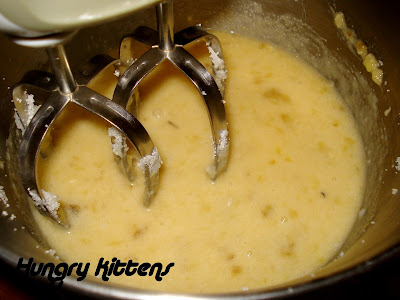 5. Combine the flour, baking powder, baking soda and salt in a separate bowl.
6. Add dry ingredients to creamed mixture alternately with buttermilk, beating well after each addition.
7. Fold in chocolate. 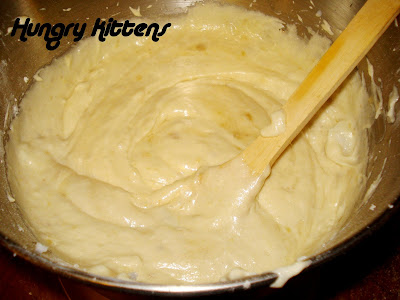 8. Pour into the prepared loaf tins. Bake for 35-40 minutes or until a toothpick inserted near the center comes out clean. Cool for 10 minutes before removing cake from pans to wire racks to cool completely. 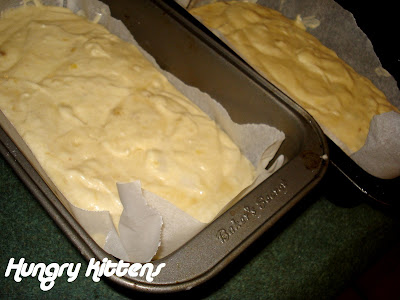 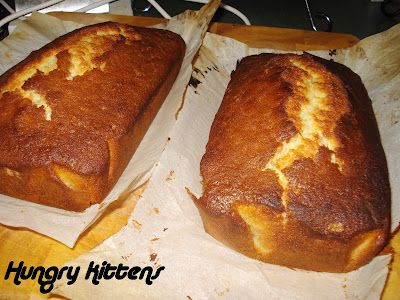 9. For the frosting, use a small non-stick saucepan and melt the butter, cream, brown sugar and vanilla together on high heat. 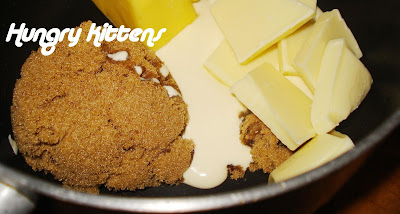 10. As soon as it comes together, take it off the heat and stir in the white chocolate until the chocolate has melted and everything is homogeneous.
11. Let the mixture cool and beat in the icing sugar until spreadable and fluffy.
12. After the cake has cooked, you may frost and serve. The cake may be stored in the fridge. 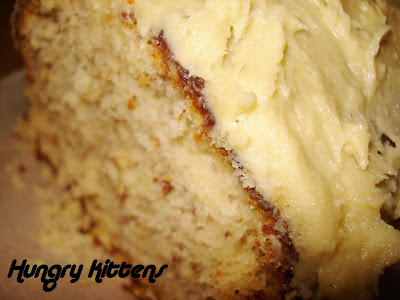 I've never thought of banana and white chocolate working together before but that's a loss on my part. They work very well together. The body of the cake is dense, moist and subtle. It's very obviously got the essence of banana and a hint of white chocolate but if you think these flavors clash and burn, you're wrong. There's nothing cloying or overly sweet happening here. 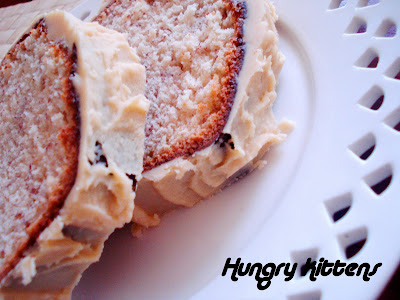 I personally loved the frosting too. I chose caramel because caramel has a positive affinity with both banana and white chocolate so it just seemed to marry well. Dad says it was too sweet for him but everyone else gave positive feedback. There's something about burnt sugar that just adds omph and depth to one-toned 'sweetness'.

The cake was also really easy to do. If you own a stand mixer, that does most of the work for you. It's not a very delicate process, so there's no excuse not to make it.
Labels: Baking, Cakes and Sweet Slices, Decadent Snacks, Dessert, Favorite Recipes, Home Cooking, Something Sweet