Dinner and Drinks at Heya Bar 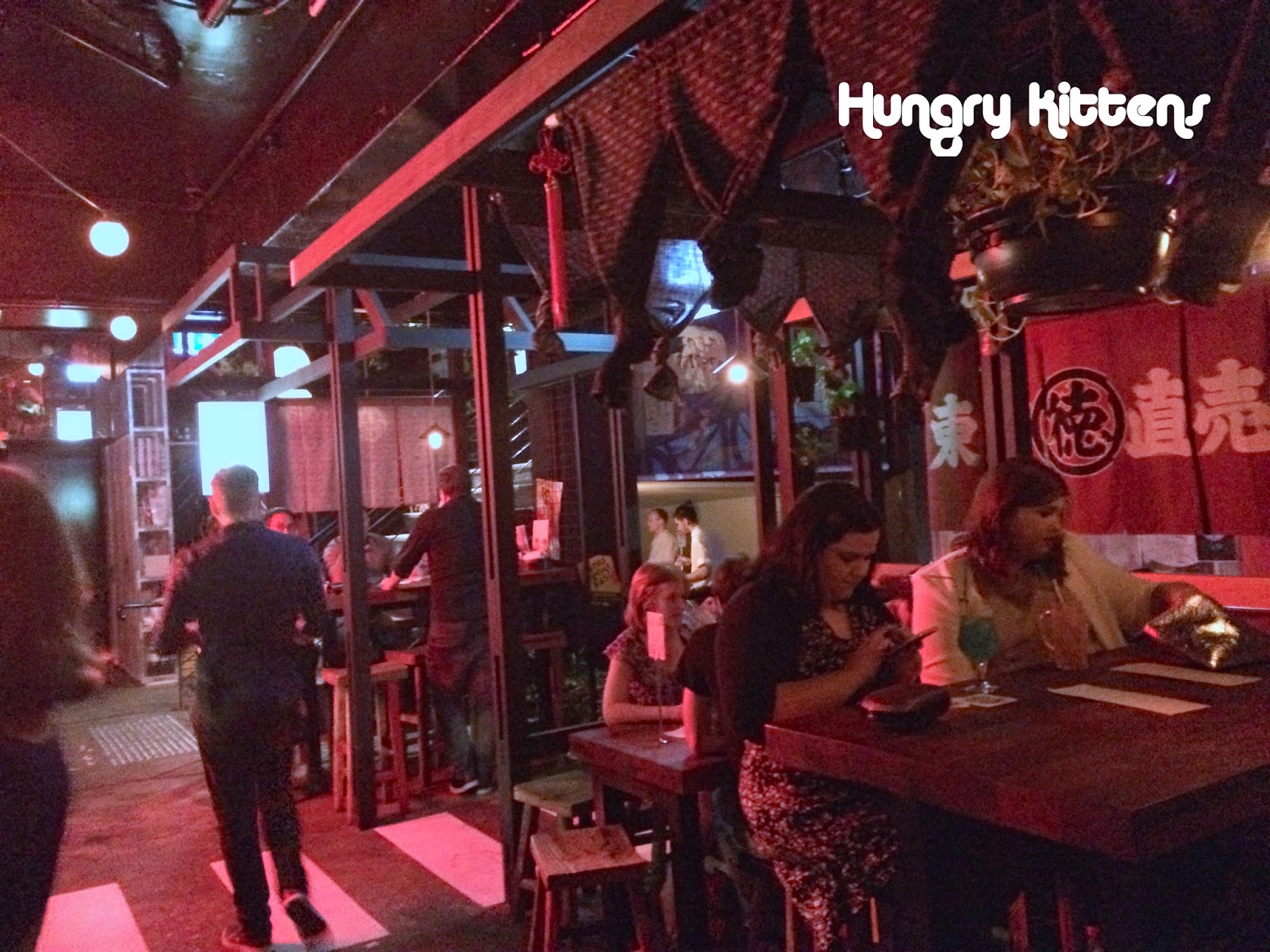 Another sign that I'm getting older (not that I need anything to remind me) is that there aren't so many 'drinking' events anymore. Maybe it's just me and the fact that I'm lazy and boring but weekends that used to be spent out on the town are now spent curled up on the sofa bed watching movies. I don't have the energy or motivation to get dolled up for a big night unless there's a good reason for it. Food, however... food is a good enough reason to get me out of the house. 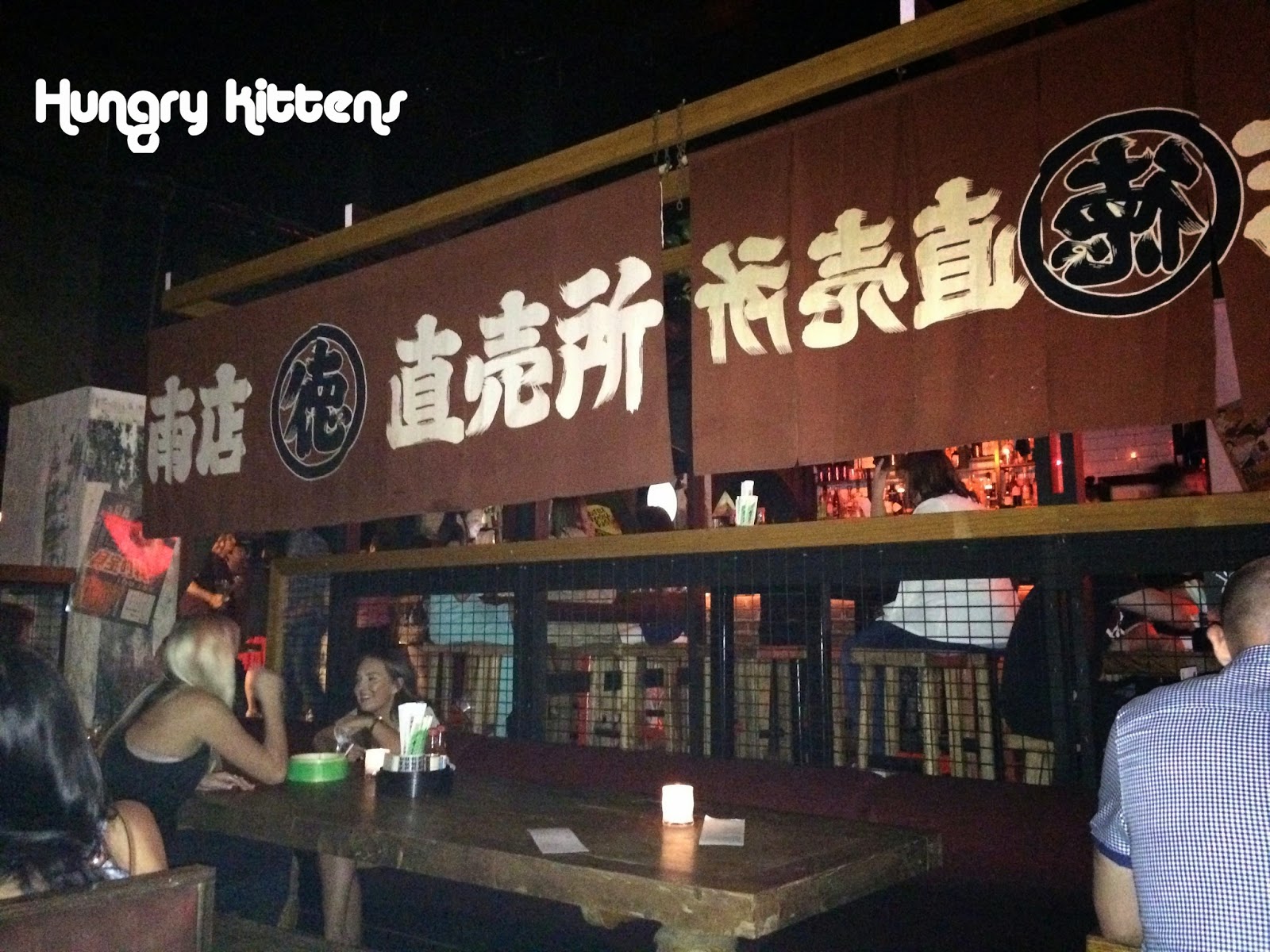 I got wind of a new bar opening in the Valley. That on its own is cool but irrelevant to me but once I read and saw photos of its food menu, it became much more interesting. The premise of Heya Bar is Asian street-stall inspired with themed cocktail menus and lots of pan-Asian bar nibblies. Heya Bar is located downstairs below Zuri, where The Brunswick Social used to be. 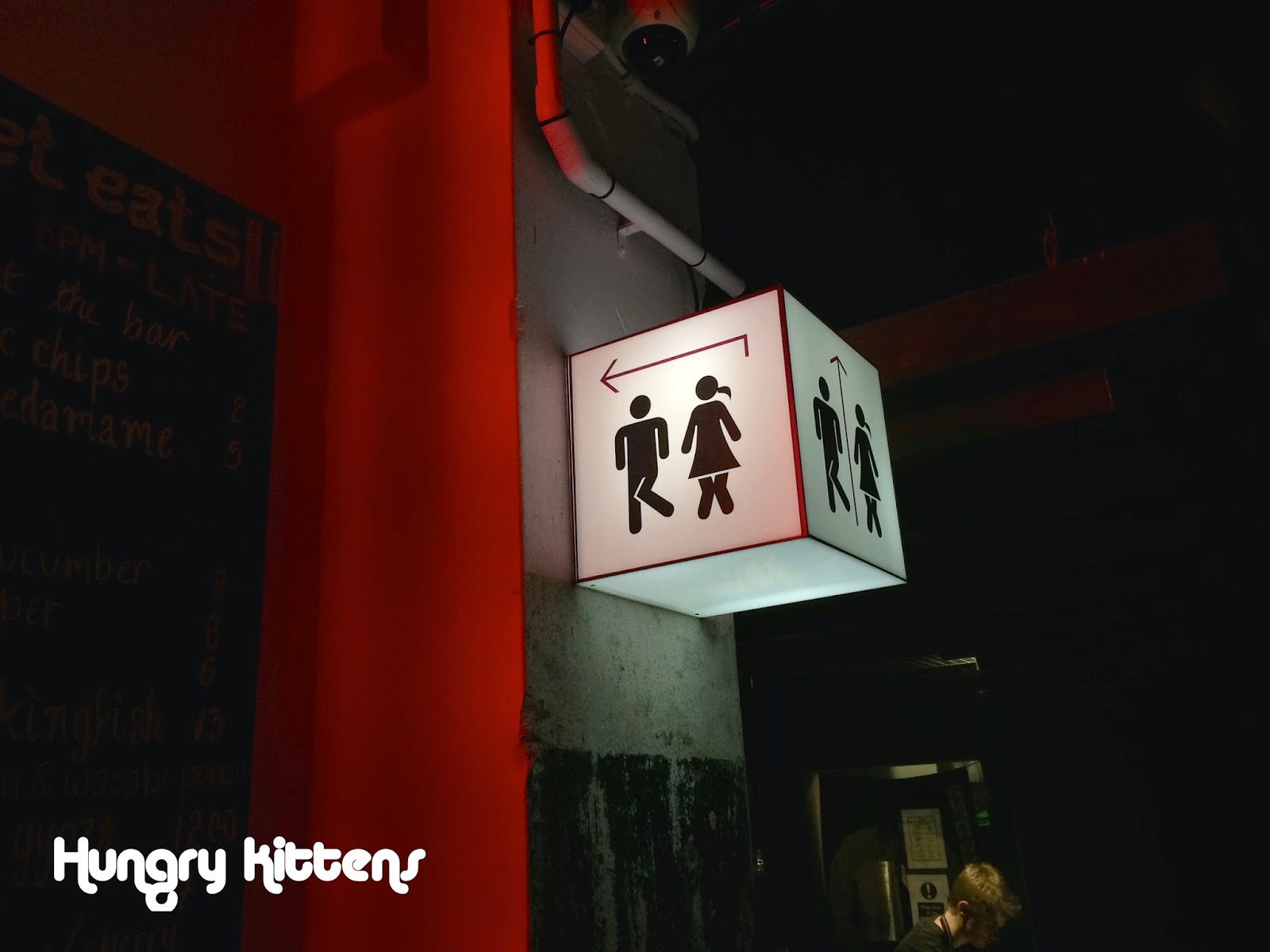 The venue is smallish but they make fairly good use of the space by layering lots of booths and nooks across a split-level, plus managing to squeeze in a hidden whiskey bar and retro pool corner. There are signs and lights everywhere, evoking a night market feel but it doesn't feel messy or overdone. 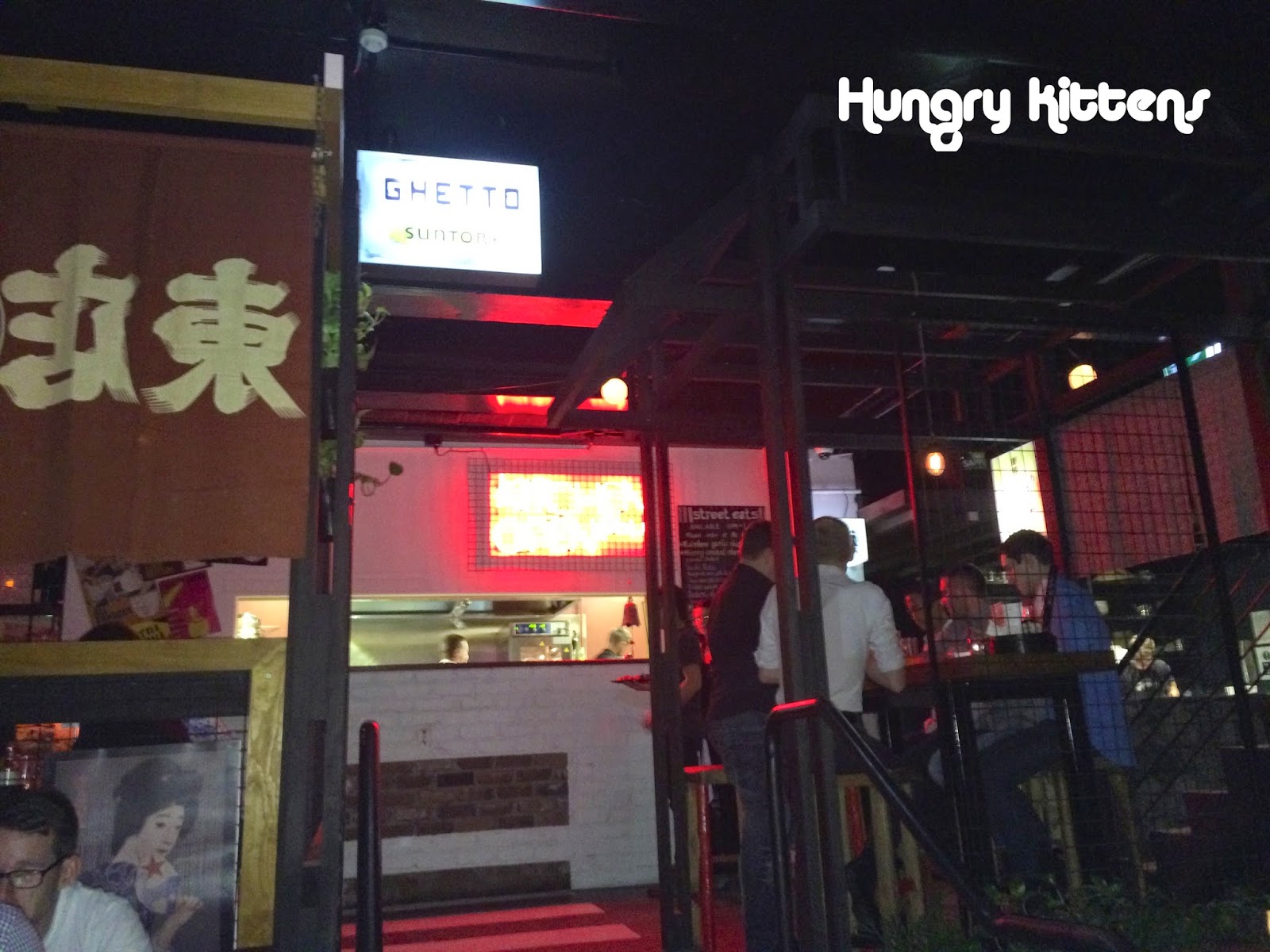 I figured that Heya would be busy on a Saturday night because a) it's a brand-spanking new bar and b) it's The Valley on a Saturday night, so I tried to group everyone together early, at around 6pm. Thanks to Marc's bad influence on me, I'm now the most unpunctual person I know and we ended up at Heya closer to 8pm. With incredibly good luck, we somehow managed to score a booth. I still can't believe it. The place was literally packed the entire time we were there but a bunch of people left a booth just as we got there. If it wasn't for that I think we would have left because we were a fairly large group and it would have been too tricky to eat without a table. 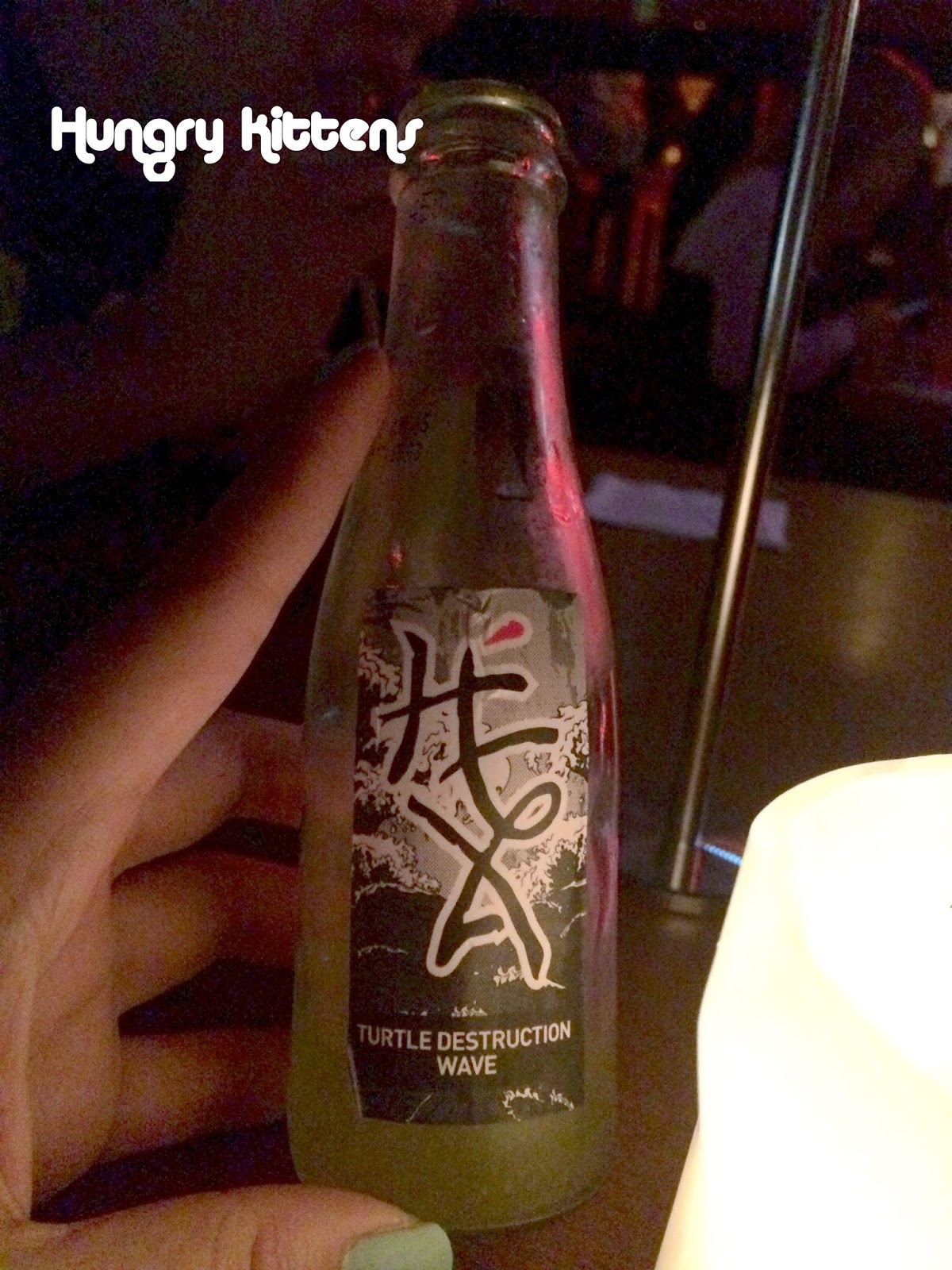 I don't normally write beverage reviews but how does one eat at a fancy new bar without blogging about their cocktail experiences? I ended up getting 2 cocktails from Heya that night but I stole sips from everyone else's drinks as well. 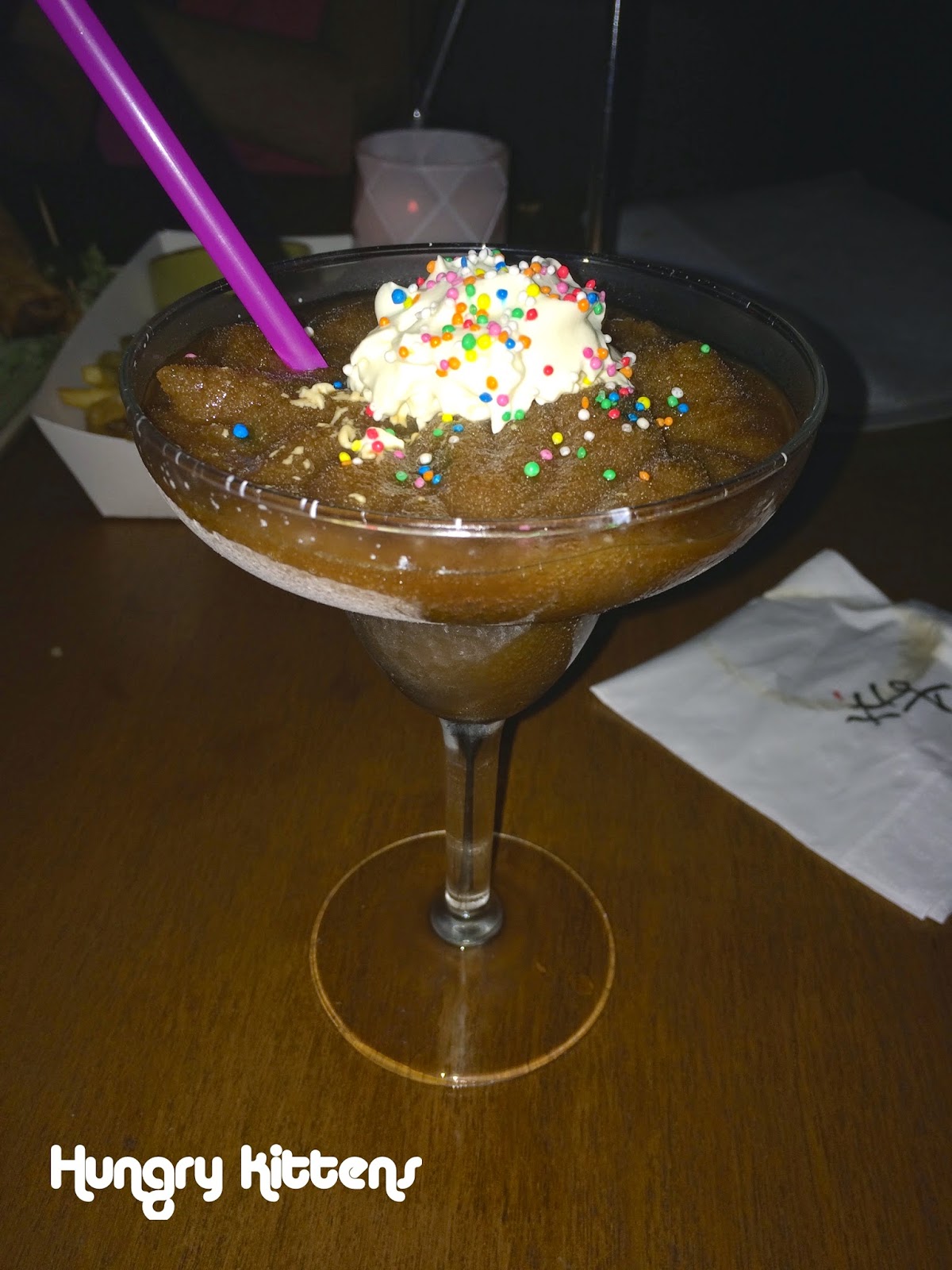 Drinks prices are very reasonable, with cocktails sitting at $10-12, which is almost half price compared to some bars in the near vicinity. 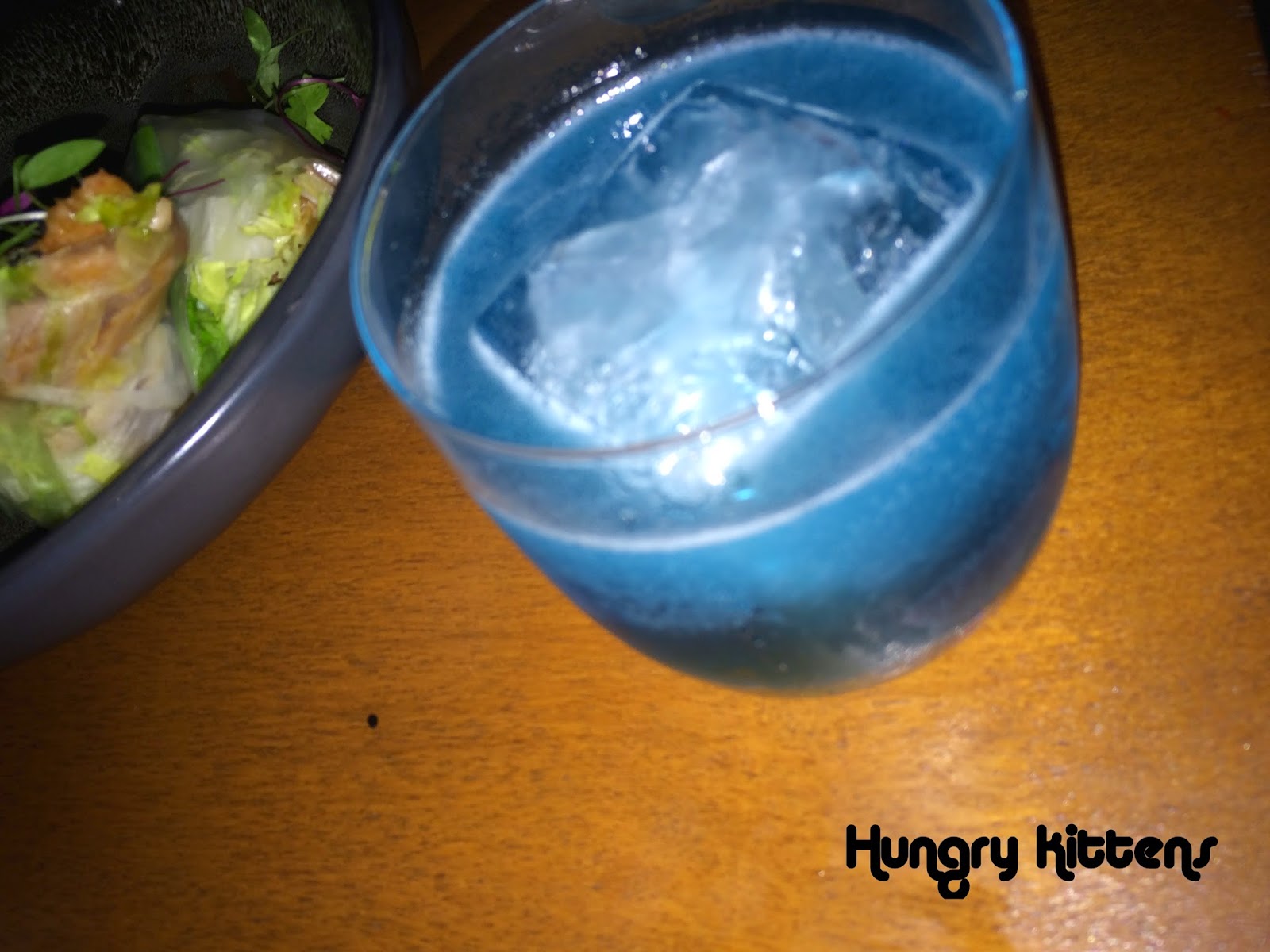 Those who ordered fancy whiskeys from the whiskey bar claimed they carried a hefty price tag but because I have no interest in whiskey, and after nearly choking when I tried some, I didn't care to ask just how much it cost. 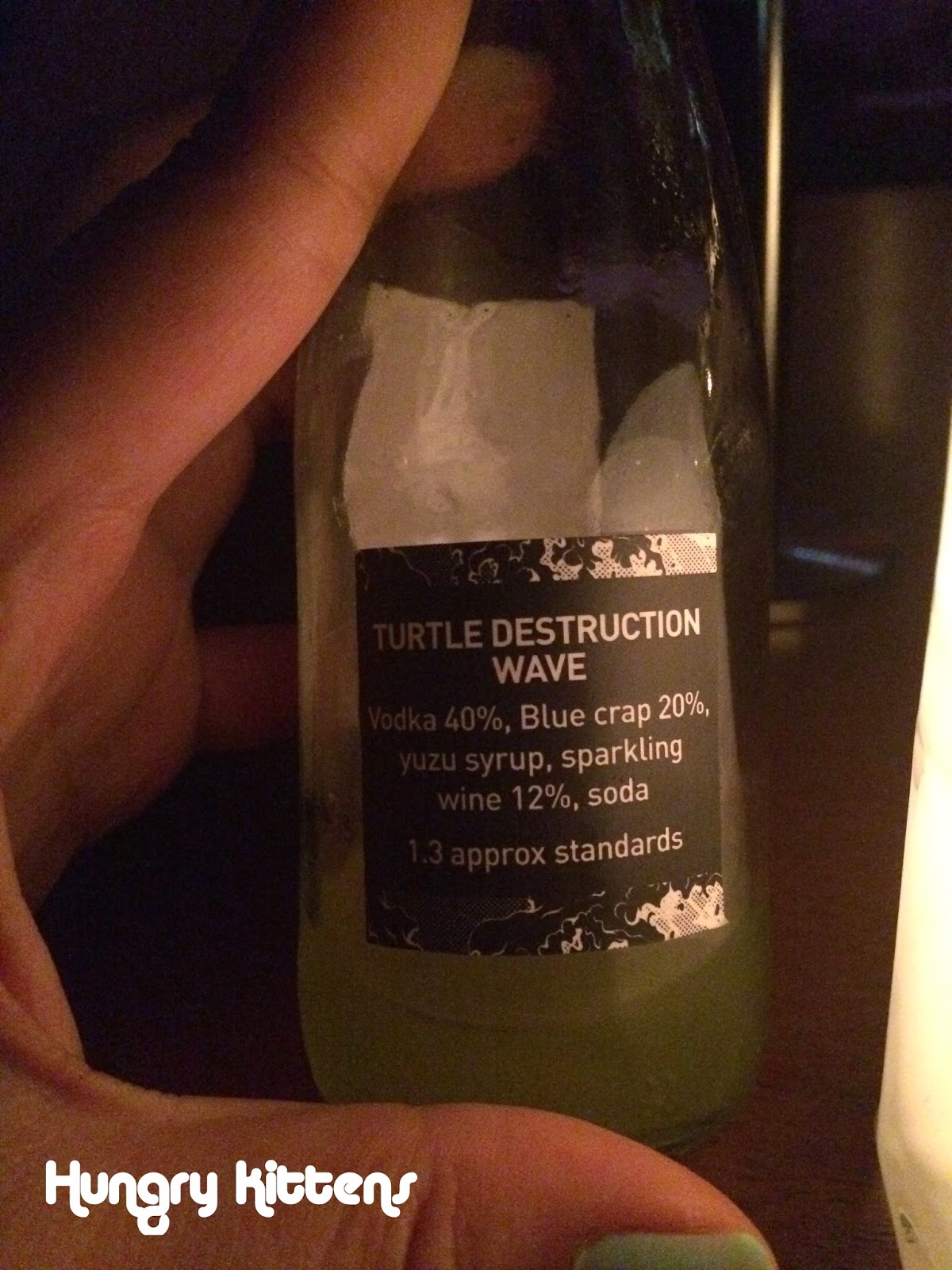 What did excite me were Heya's own labeled booze potions. These came in a variety of colours and flavours but all had the same label claiming they were made of 20% 'blue crap'. Lol. 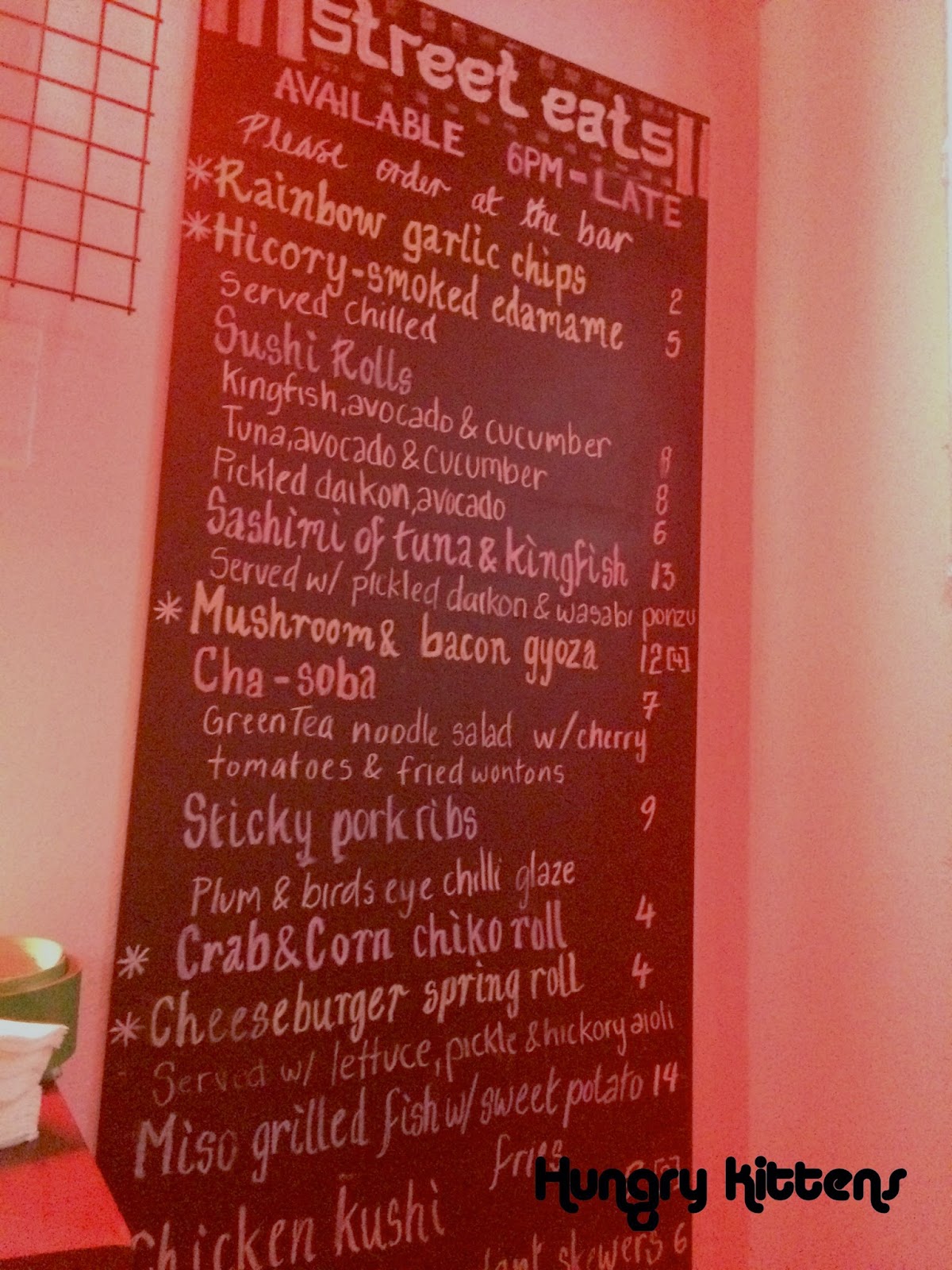 As for the food, the street eats menu had so many things that sounded good that we very nearly ordered everything on the menu. The plates are designed for group eating so we chose a bunch to share. Various items arrived at staggered times throughout the night. 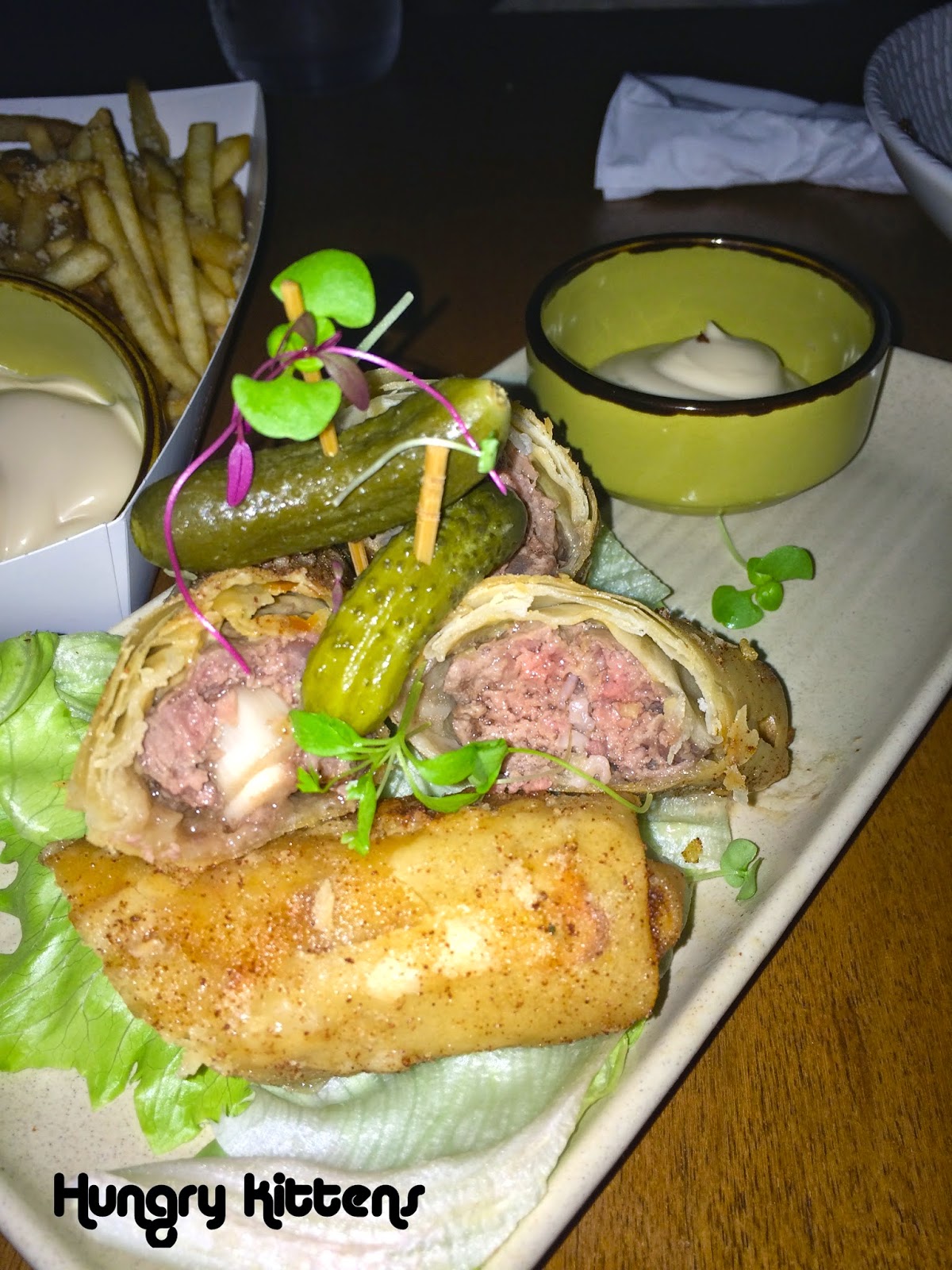 There are too many items to write detailed comments about but as a whole, the food can be divided into things that didn't really make an impression and things that were very tasty. To start with the good, we all loved the cheeseburger spring rolls. This was something that Jenny was hesitant about when I first showed her on Instagram but we agreed that it had a distinct cheeseburger flavour (something to do with the mince filling and sauces) but wasn't too weird like we suspected it might be. 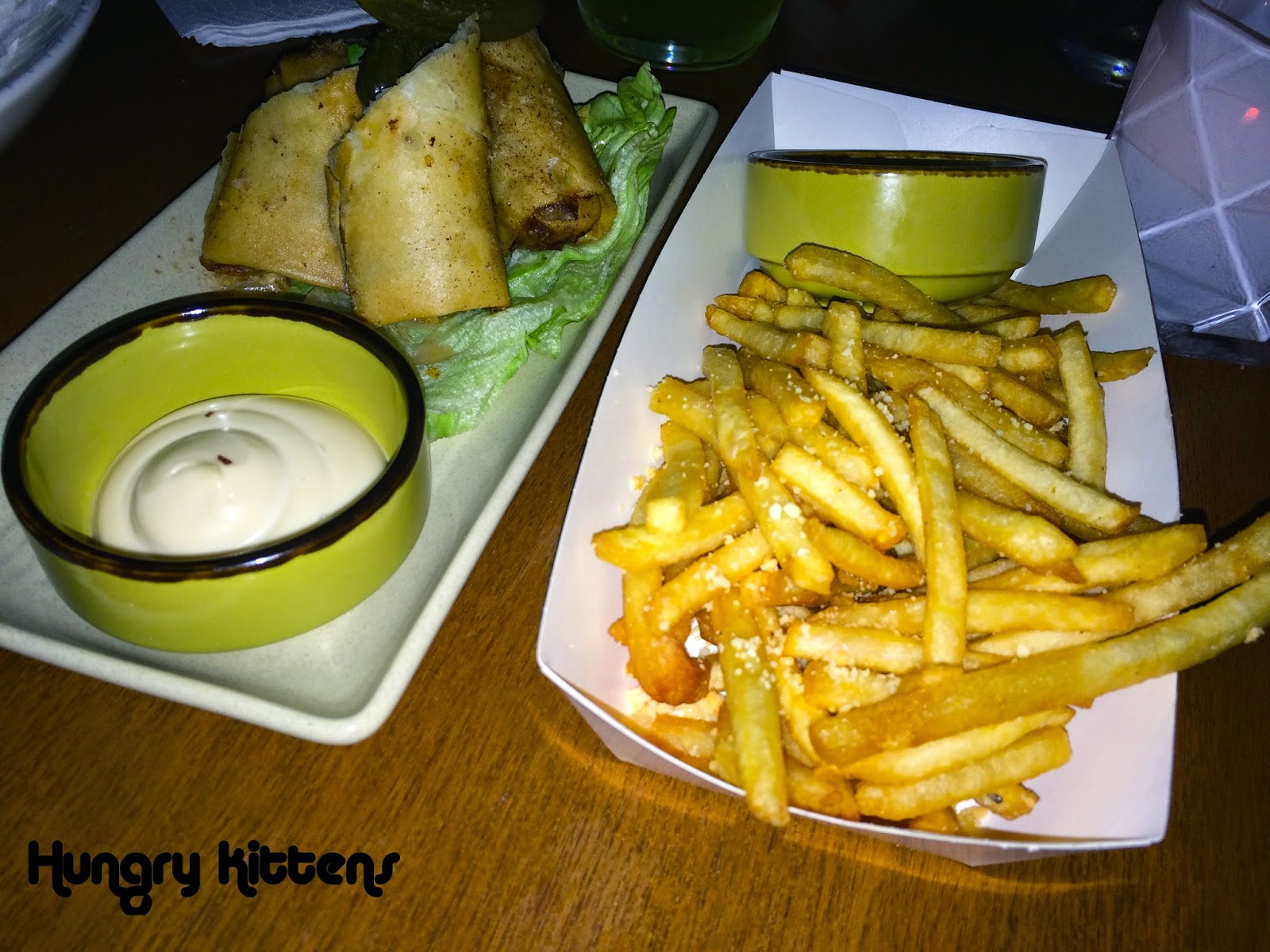 The Sriracha fries were good but didn't taste spicy at all. We didn't even remember they were supposed to have Sriracha flavouring until they were nearly all gone. We did love that they were so fried there were parts that were crunchy all the way through. I love fried crunchy bits!!! 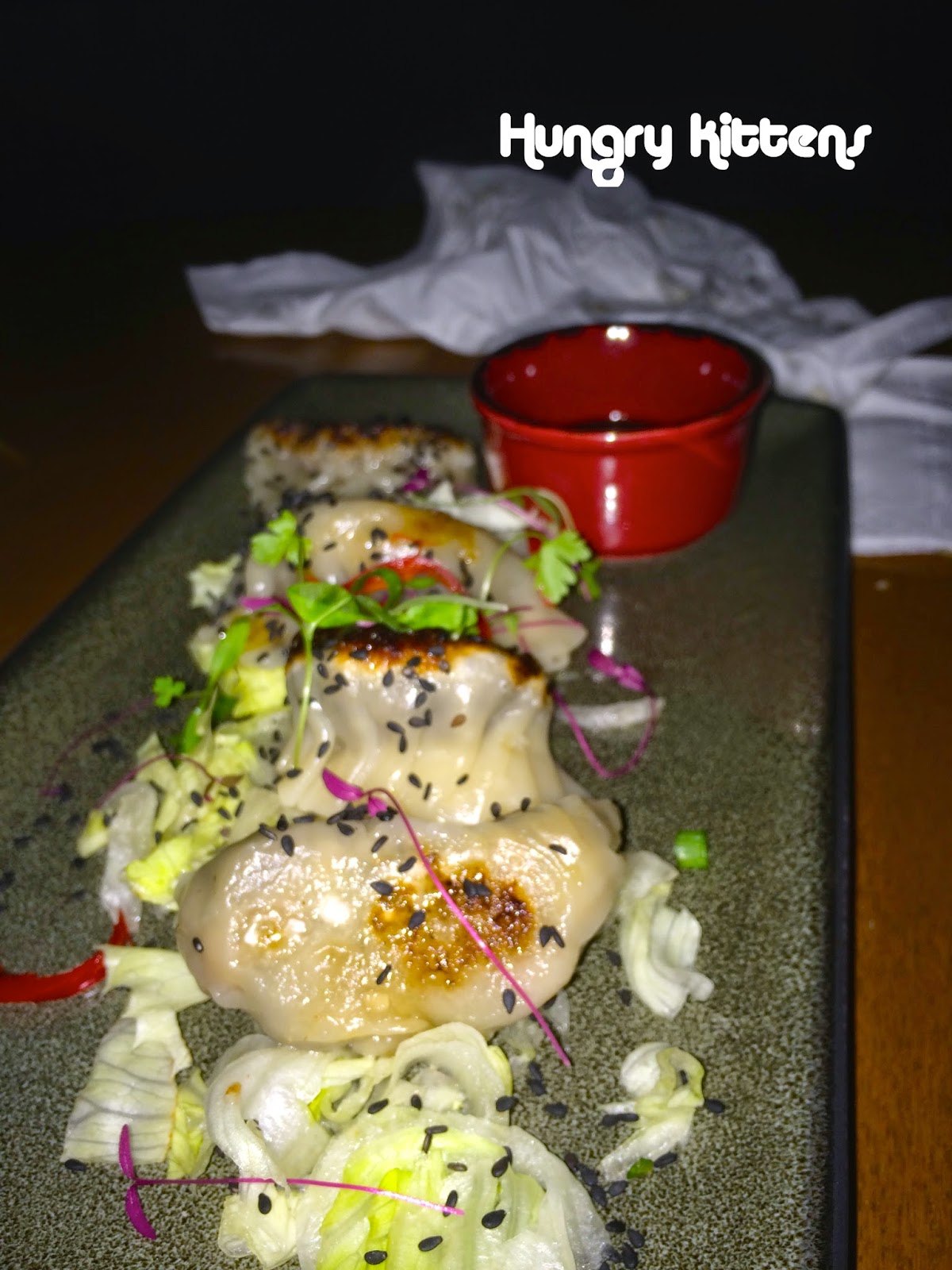 The mushroom and bacon gyoza were also yummy but to be honest I didn't realise what the filling was until I reread the menu. The whole time I was there I thought they were duck gyoza and I kept telling people it was duck gyoza and no one corrected me. Did I mention we were drunk? 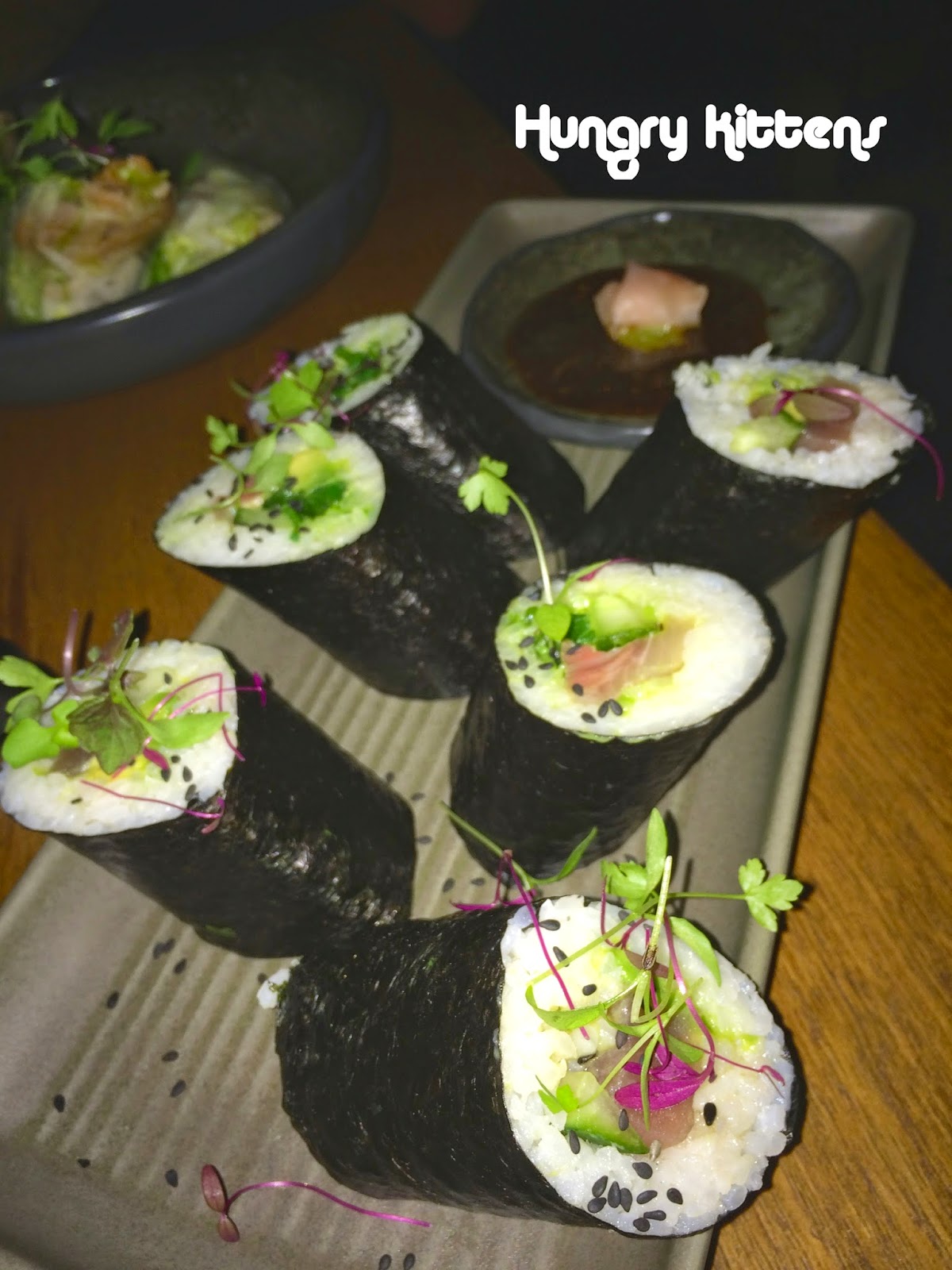 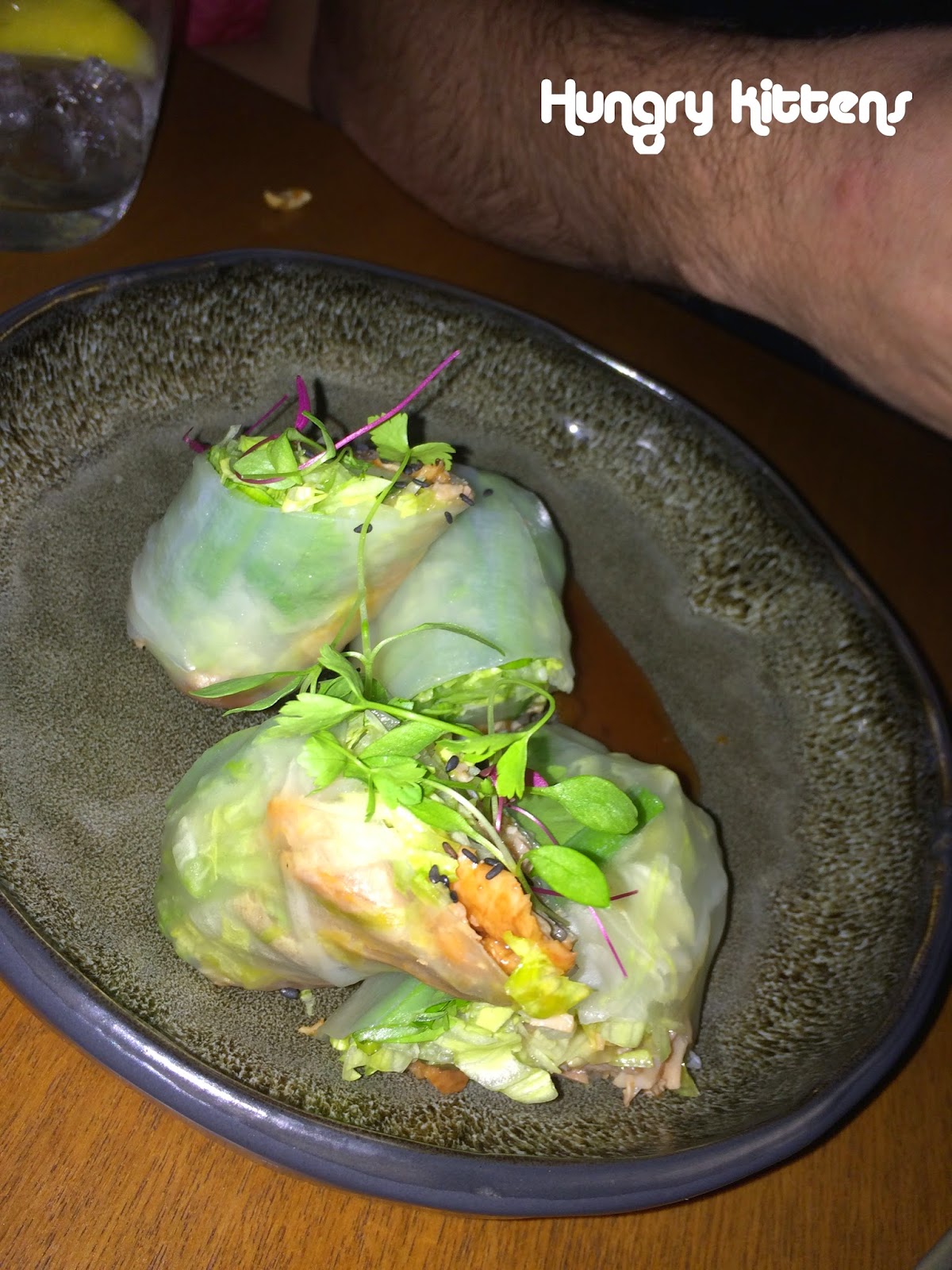 Items that were less impressive were the rice paper rolls, which were probably healthy but not flavoursome and naughty enough to be bar food, and the sushi rolls, which didn't have enough fish in them. 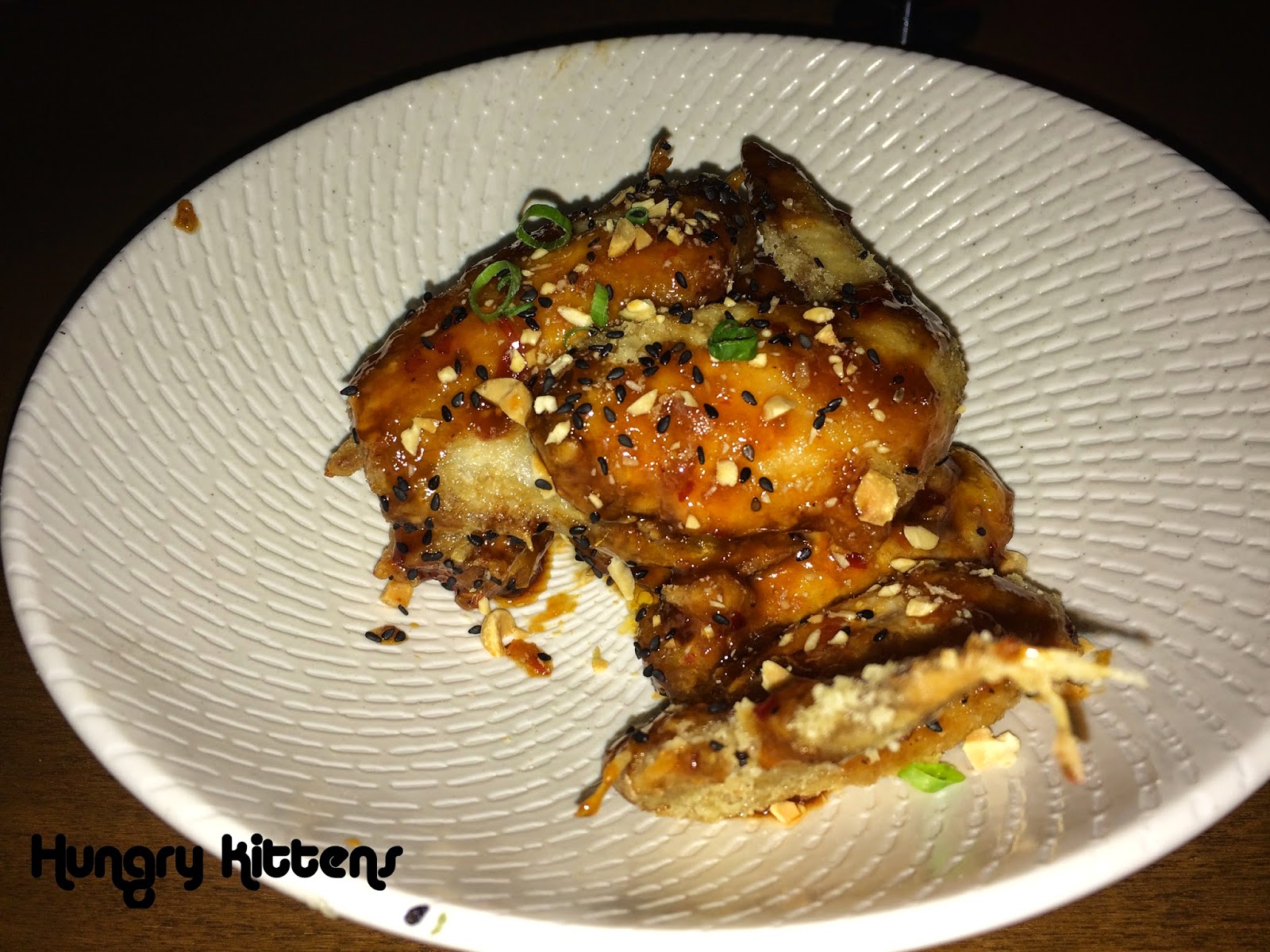 Our first order to arrive was the chicken wings and we were really hungry at that point so they went down a treat. The last item to arrive was the miso-infused eggplant skewers. I had high hopes for these because I love eggplant but they were just average. 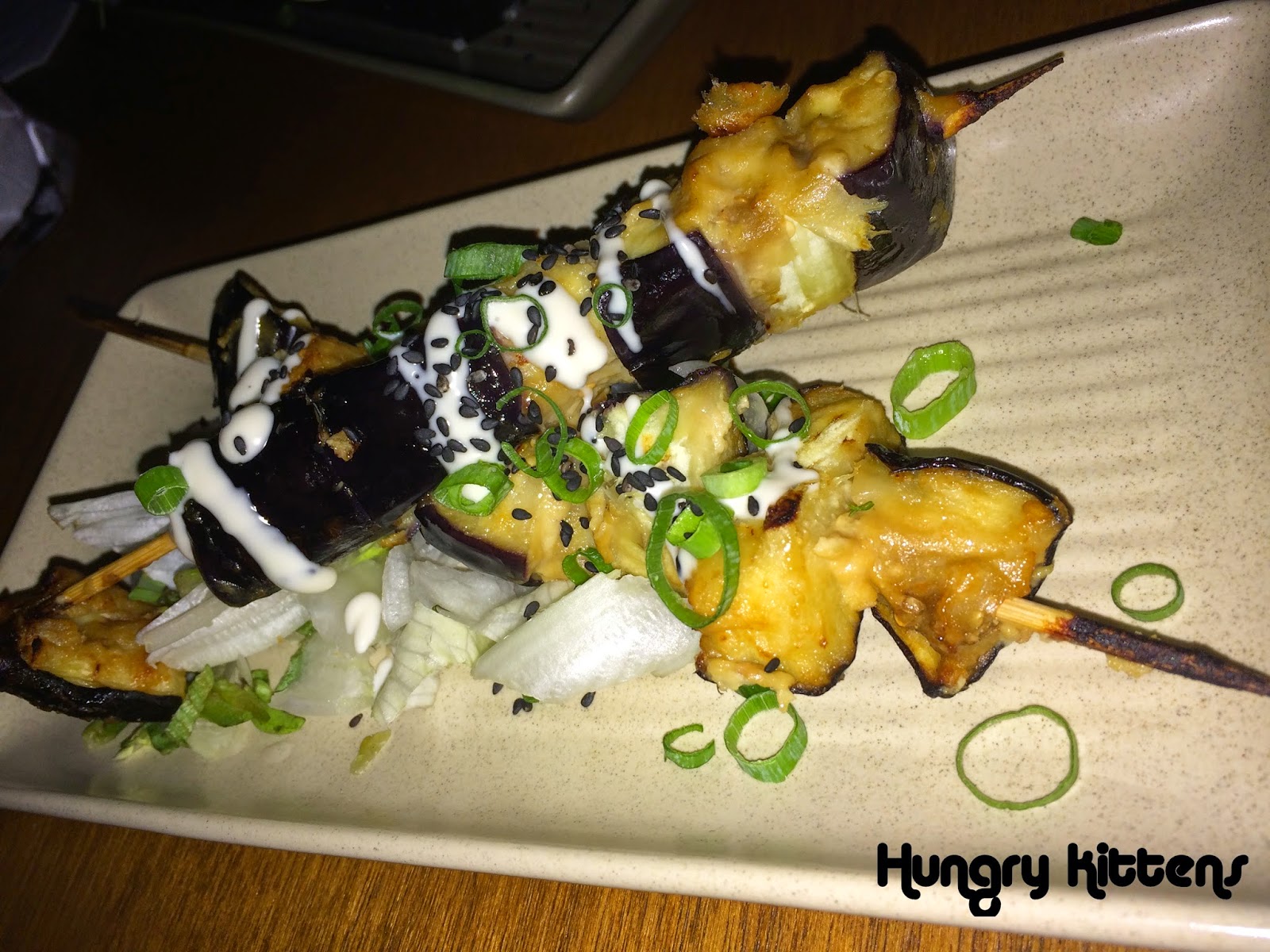 Something that frustrated us throughout the night was the lack of napkins. I don't think Heya has set itself up adequately for a full food service because only some of the tables had cutlery/napkin stands and ours wasn't one of them. I noticed one napkin stand float around between several tables. Most of our food was finger food and some of it was sticky and messy so we really needed easy access to napkins. I think that's something that can easily be worked on. 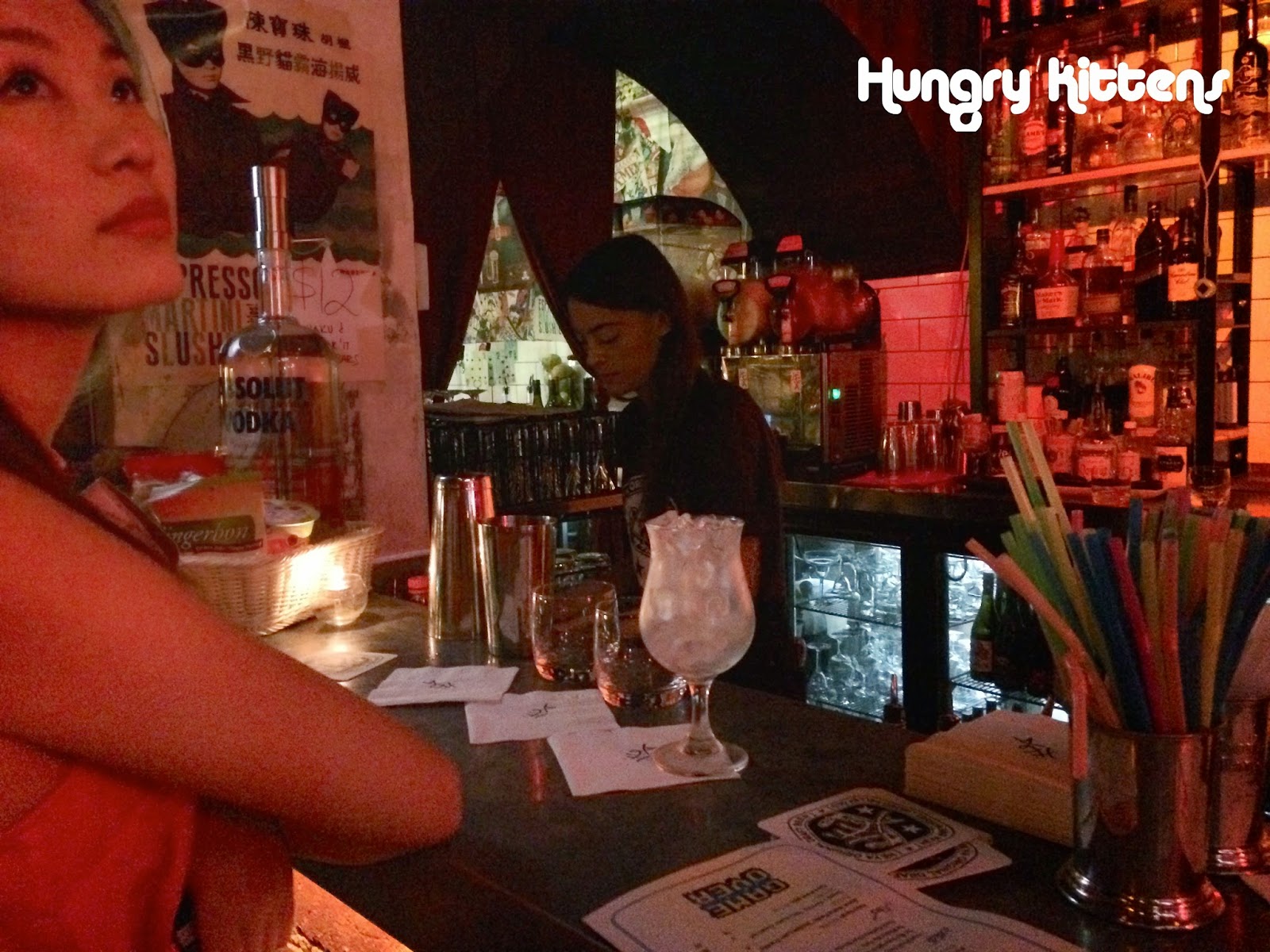 Overall the food ranged from adequate to unique and delicious. Drinks were served quickly and were as a whole, inexpensive. What was best about Heya Bar was the ambiance. It has a really fun vibe going on. The lighting is almost non-existent but the place buzzes with energy and music. We had a good time there.
Labels: Asian Restaurants, Bars and Lounges, Casual Dining, CBD and Surroundings, Dining Out