Sydney weekend in May 2 - Dinner at Rockpool Bar and Grill 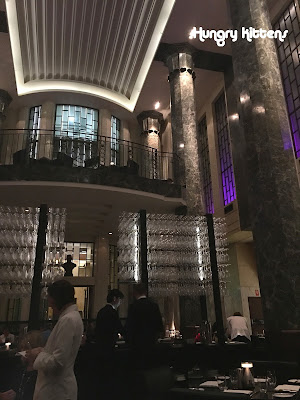 Because of my anxious personality, I always need to plan things well in advance. If anyone asks me to think of a restaurant to visit on the fly, I freeze up and my mind goes blank. It's alright for when I'm in Brisbane because I live here and have a supply of general 'go to' places (mostly eateries around Sunnybank) for when I have no other ideas. On an interstate trip, it's less desirable to be unplanned because I don't know other cities well so unless I have a booking made at a restaurant pre-researched, I assume we'll sit down somewhere unremarkable.

Friday night of our Sydney weekend, this exact scenario happened where we had no actual plan of where to go but wanted to have dinner out. By some stroke of good fate we happened to walk past Rockpool Bar and Grill and I remembered this was a restaurant I'd been wanting to try for a long, long time. I had once walked into this Rockpool building before, by accident, when I was looking for their fine dining restaurant so everything looked vaguely familiar.

We didn't have a booking and I didn't know if we could get a table but amusingly, the restaurant wasn't even officially open when we rocked up. The efficient front of house staff made arrangements for us, provided we finished eating by a certain time (it was ample time to eat without rushing). We then hopped over to the bar to enjoy a drink before service started. Even though it was too early for dinner, the bar was packed with guys in suits. I had a wistful moment daydreaming about a corporate office worker in Sydney, thinking this could be the kind of place I drink at every Friday evening. We sat at the bar and soaked up the theatre of it all. One of the drinks we ordered was smoked in front of us and I tried to take a photo but it turned out blurry (see above). The resultant drink was strong. 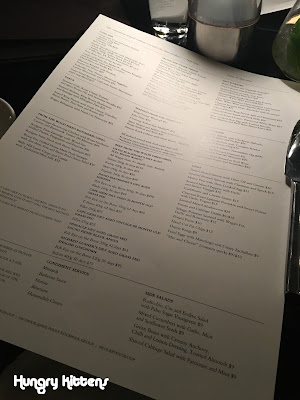 Before long, a waitress collected us and ushered us to our table. The restaurant is huge and expansive, with high ceilings and marble accents that made me think of a prestigious old bank. I was surprised by how comprehensive the menu was. I expect most restaurants at this price point to limit what they have on offer but as well as a very thorough grill section, there are plenty of seafood, poultry and even pasta dishes. 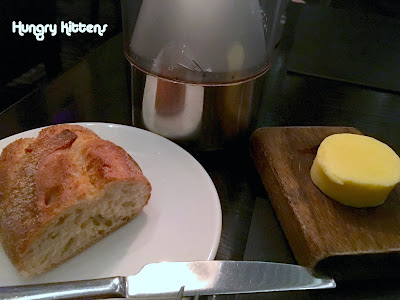 I read through everything but when we're at a steak restaurant, I'm not going to go past the steaks. I got dumbstruck by what was on order and even asked our waitress to explain to me the differences. In the end we chose two cuts from different sections and the waitress arranged for the chef to serve them in halves so we could both try each type. We also chose some entrees that were also split into shared serves. 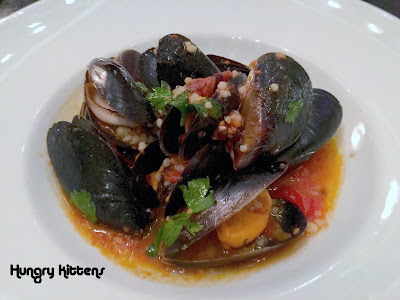 Our first entree was the steamed mussels. It was so delicious. I've had mussels at several restaurants before and generally prefer creamy garlic sauce to tomato-based sauce but this was absolutely divine. As a soup-lover, I could easily live off this mussel sauce for the rest of my life. The mussels themselves were juicy and paired with the fregola (I had to look up what it was; I thought they were pearl cous cous, which I suppose is similar) and umami broth it was a heavenly combination. Pictured here is just one half of the listed entree serving. As I mentioned above, Rockpool split our entrees so we had a serve (like that pictured) each. That's very generous compared to how sparse and garnish-like entrees can be at other restaurants. 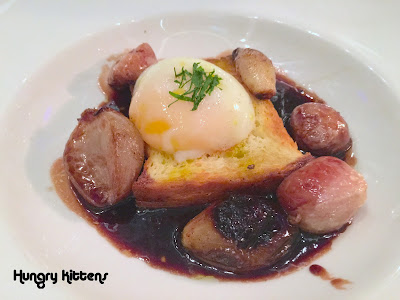 The next entree I chose was something that caught my eye straight away. I'm often accused of being drawn to what others think of as 'weird' dishes but to me, bone marrow and slow-cooked egg aren't things that sound 'weird'. I ordered it because I think it sounds delicious and exciting. What arrived at our table was very much to my expectation. The toasted brioche was buttery and rich and incredible when soaked with gooey egg yolk and the toasty flavour of bone marrow. I enjoyed the richness of the red wine butter sauce too. This is a dish that you couldn't eat too much of but what we did have, I enjoyed very much. 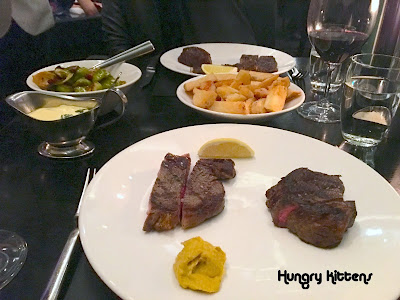 Steak is served, plus sides of brussel sprouts with chestnut and speck and fat chips in the back

The steaks were brought out next with a jug of Bearnaise sauce and other condiments available to our liking. I chose hot English mustard. As well as mains, we had ordered some sides to share: the fat chips and brussel sprouts with chestnut and speck. 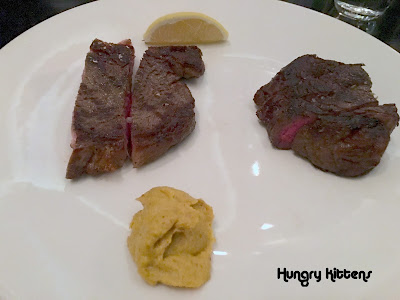 It is recommended to order the steaks medium rare and that's what we selected for both cuts. By this point, I'd made good progress in a bottle of red (and that's after the cocktail and some beers earlier in the evening) so please don't test me on the exact differences between the two steaks we tasted. Both were cooked perfectly (I expected nothing less from a Neil Perry restaurant, considering I learned to cook steaks from his video and cookbook) and I personally liked the wagyu more.

The chips were crunchy and great for filling any holes in the stomach (not that we had any but we made room for the chips anyway) and I enjoyed dipping the chips in steak juice. Classy? Perhaps not but for me, enjoying my food is more important than being ladylike any day of the week.

I know that brussel sprouts are a turn off for many people but for whatever reason, I love them. I'd only really tasted them in Chinese cooking so I was curious about how it tasted with a Western treatment. The brussel sprout here was smokey and bacony and very yum but I couldn't detect any chestnut. If I was to be critical of my own ordering process, I should have picked a fresher salad to act as relief from the steak.

I had an amazing time at Rockpool Bar and Grill. It's one of those restaurants I went into with high expectations and every aspect of our dining experience, from service to environment, to drinks and food, was impeccable. I don't say this very often about higher priced restaurants but this is a place I would revisit at the expense of trying someplace new. Our courses were brought out with such precision in timing that I never once felt like I was rushed or waiting for the next item to come. Rockpool is a well-oiled machine and their delicious food and professional staff reflect why this establishment remains successful after so many years.