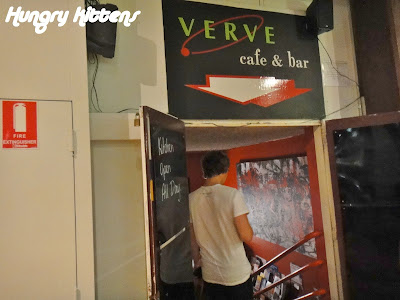 Another year goes by, another birthday, another notch up the age ladder. This past year marked my milestone of no longer getting asked for ID at bottle shops. It took me a while to notice this trend but once I did, I realized it wasn't every now and again but every single time. A sad, sad development. 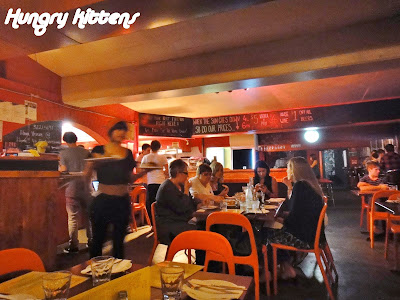 That aside, I decided this year I'd be celebrating my birthday with a hand plucked select group of close friends in Brisbane. Gone are the years of splashing out invites for huge parties - probably another indication of my getting older.


I picked Verve in the city because another friend mentioned it once on passing and I wanted somewhere inexpensive with a good atmosphere, casual food and drinks. Verve seemed to fit the bill. 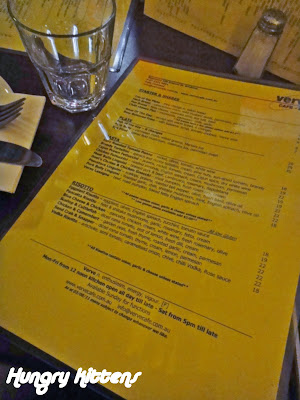 When I made the booking I had no idea who was coming so I just guessed 7. We arrived to find a table for 8 set out and miraculously, exactly 8 people came (myself included). I love it when you fail to plan and it works out perfectly.

Verve gave out the right vibe straight away... it's underground and has this party/den-like feel about it without being too rowdy. 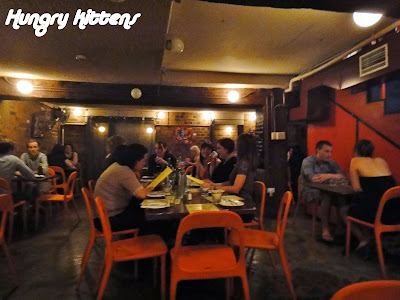 Due to my stubbornness (I refused to put my camera flash on) and tipsiness (it was my birthday after all), the quality of my photos are piss poor. There were a couple that were unusable but I'll give honorable mention to those dishes too. The rest have been forced through a sea of filters and contrast adjustments on the computer but are still murky at best. Next time I'll know to use the flash. Night mode on my camera is gooood but not THAT good.

I gave my best friend Kat one rule 'I don't want to make any decisions' and then proceeded to tell her I wanted the chicken pizza. She figured out the rest. 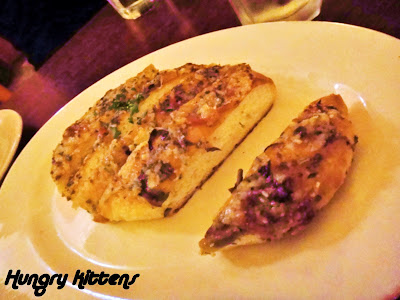 Our table had some starters to share. There was a plate of pan bread and herb bread. They were both delicious! 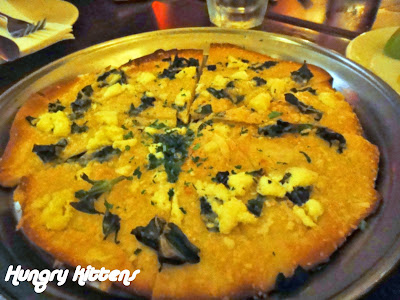 I was extra hungry (didn't have time to eat all day due to the rush from work to Brisbane) so that might have contributed but the herb bread was squishy and soft and flavorsome and the pan bread was thin and crunchy. I had doubles of everything.

Then came the mains. I'll just post up what everyone ordered and what they said about their foods. For the ones missing photos, just imagine the photos are there... 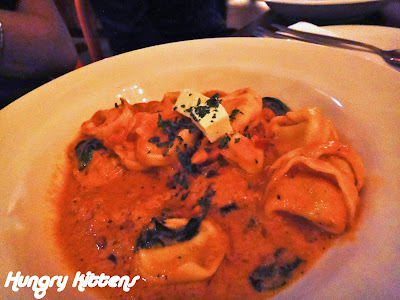 Blossom picked the brandy tortellini. I tried one and thought it was delicious. She said it was good at first but then became too tomatoey and sour. 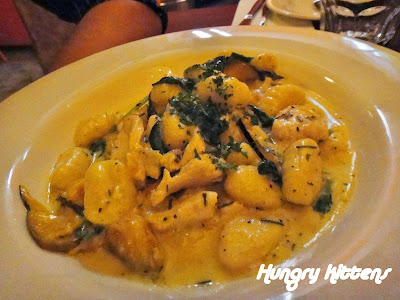 Jaws went for the gnocchi. I don't like gnocchi much - I think I've only enjoyed one gnocchi dish I've ever tried (and I made that one so maybe I'm biased) and this didn't do much to turn the tables. Jaws said I was crazy. He liked it.

Unfortunately those were the only 2 photos that made the cut.

Mork ordered the lasagna which he complained was too sour.

Dunc and I shared the chicken pizza. I have no idea why I didn't take a photo of it. Oh wait, alcohol. Partying. Socializing. That's probably what distracted me. Anyway I wasn't a huge fan of the pizza. It wasn't awful but the pan bread entree was much better. I ended up just picking the topping off.

TRex (can you tell they were all picking out code names for my blog at the party?) tried the pestacore linguini. I had a bit of this and thought it was quite good. I wish my photo of this dish was good enough to post because TRex gave me a thorough review. She said it was good for the price but not outstanding and she liked the freshness of the lemon. I also recall her mentioning the scallop wasn't overcooked (to which my drunken self replied something like 'and they so often are'). 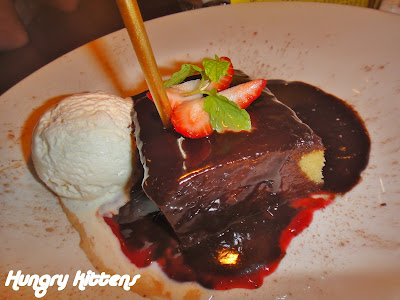 Finally, I was caught off guard when I saw a sizzling brownie coming my way. On cue, my wonderful friends proceeded to embarrass me with a chorus of Happy Birthday. The brownie is deceptive - chocolatey on the outside and white on the inside (maybe it wasn't REALLY a brownie) but delicious all the way. I 'accidentally' took a photo of it with the flash on and at that point realized that's what I should've been doing all along.

Verve was fun. The food was pretty good as a whole, especially considering that it was a lower-priced, casual establishment. We got a lot of use out of the bar. The environment was perfect for what I was doing. What made it 100% awesome though was my amazing, fabulous, closest friends. Thanks guys for coming and making my 24th very special (and thanks for contributing your own amusing nicknames).
Labels: Casual Dining, CBD and Surroundings, Dining Out, Italian Restaurants