Lunch at A Slice of New York 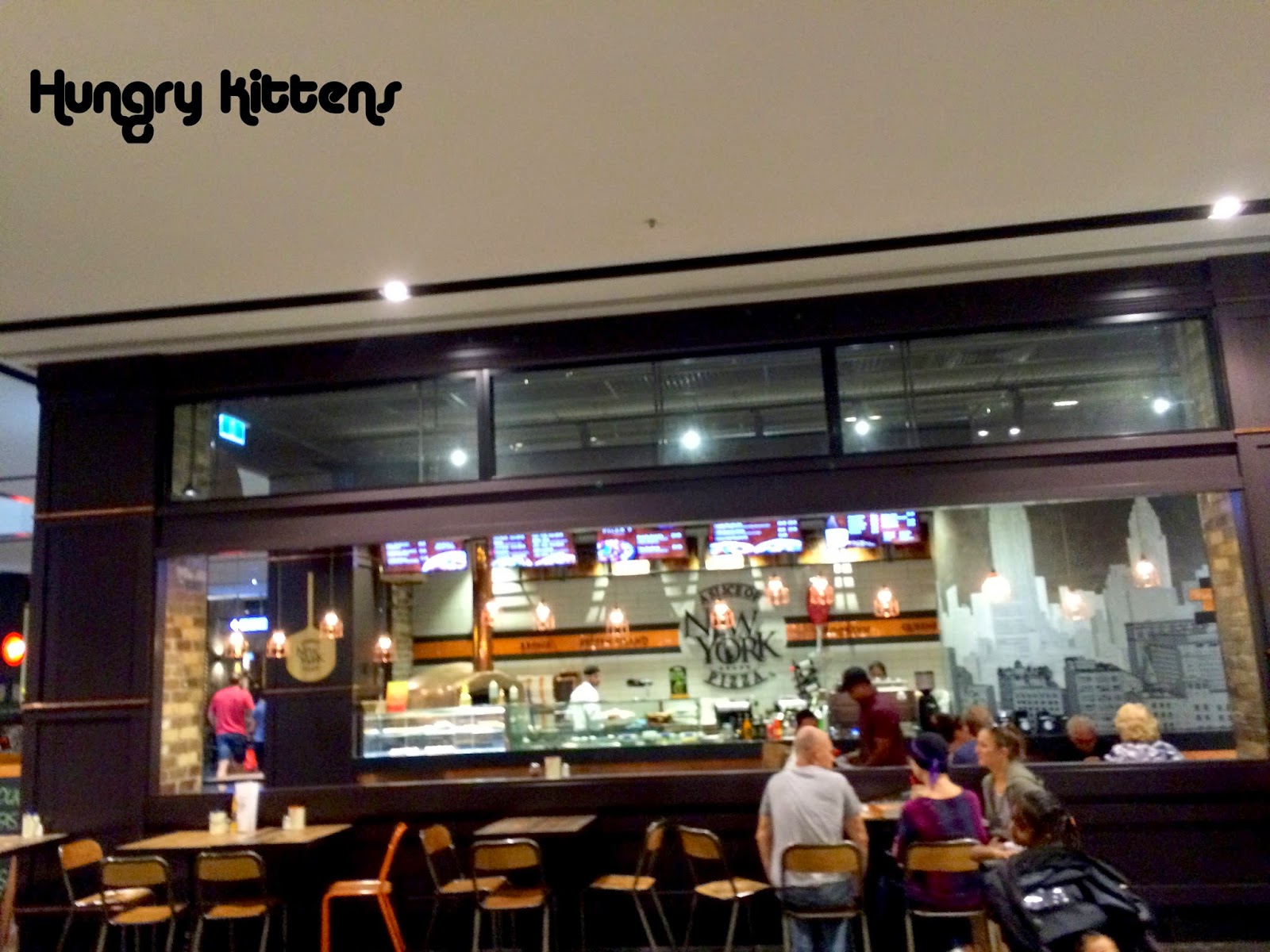 In an obvious display of lack of self-control, Kat told me about a new pizza place that had opened in Westfield Carindale; I said "ok let's look at the menu but we won't eat there today because I want a healthier lunch" and we stopped by and ended up eating pizza and chili fries. I challenge anyone to step into this shop, see the menu, smell the air and not stop in for a feed. It's impossible! 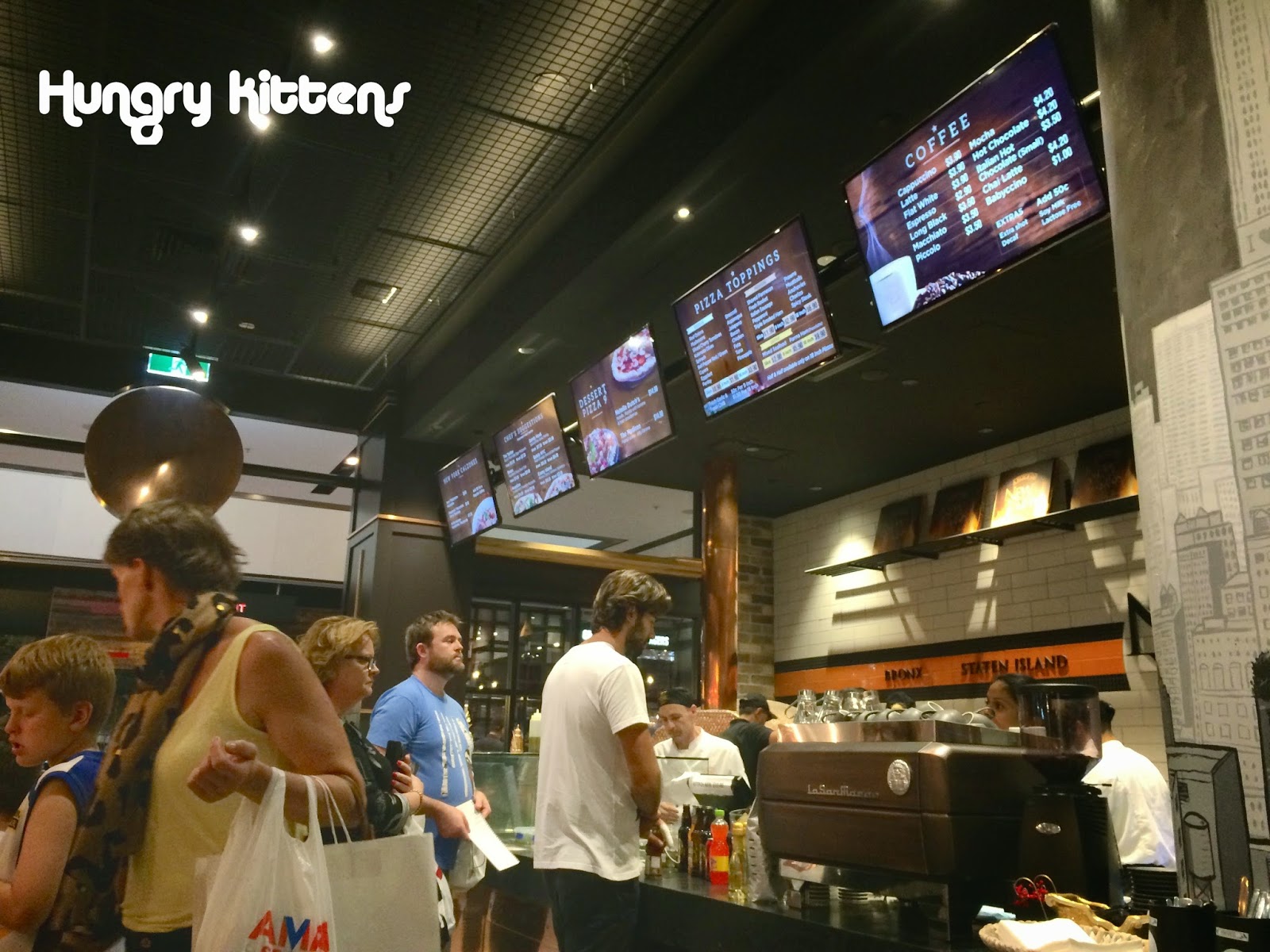 We parked ourselves at one of the tables inside. There was a peak hour rush when we got there and soon there were no tables and a bit of a queue to boot. I'm glad we were two people because I could guard our table while Kat ordered. 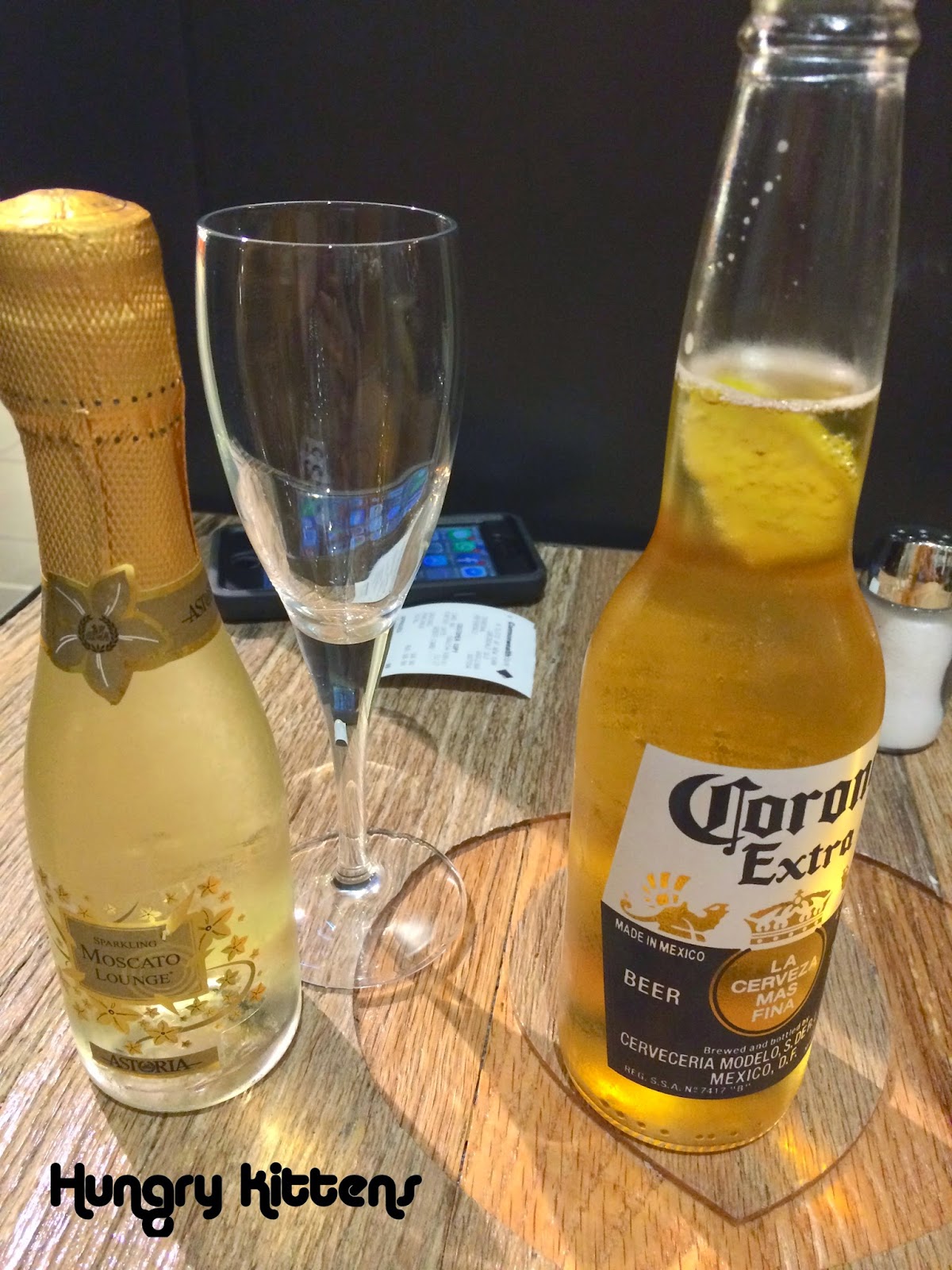 Kat had eaten at A Slice of New York before and explained the menu. Most pizza flavours are available in 2 whole sizes, 9in or 18in. An alternative is to order the margherita, which is available in 18in slices, and add toppings as you like. I actually like plain pizzas so I was happy to just get a slice of margherita and Kat followed suite.

We were told there would be a slight wait on the pizza because they were so busy but also because each pizza was baked fresh. That was fine by us because we had beverages and a 'starter' to line the tummies anyway. 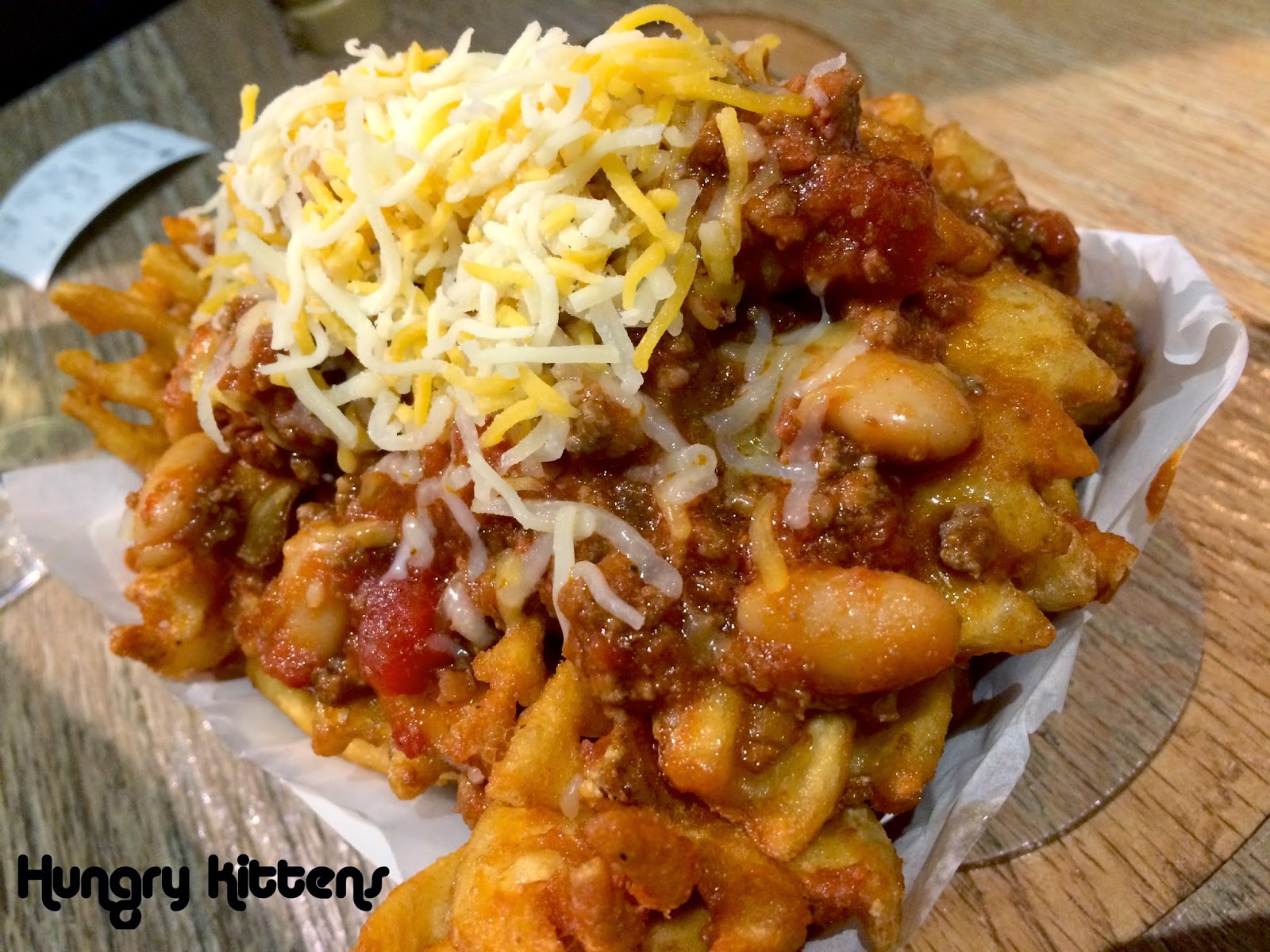 Our starter was a mountain of chilli waffle fries. There's the option of curly or waffle and I'm glad Kat chose waffle because I'd always wanted to try these! They were soooooo good. There's so much surface area for crunch that each bite tastes so moreish and amazing. The chilli mince topping was nicely seasoned. We chose mild but there's also the option of chilli. Forget healthy eating, I'd rather dine on these chilli fries and have an expanding waistline any day. 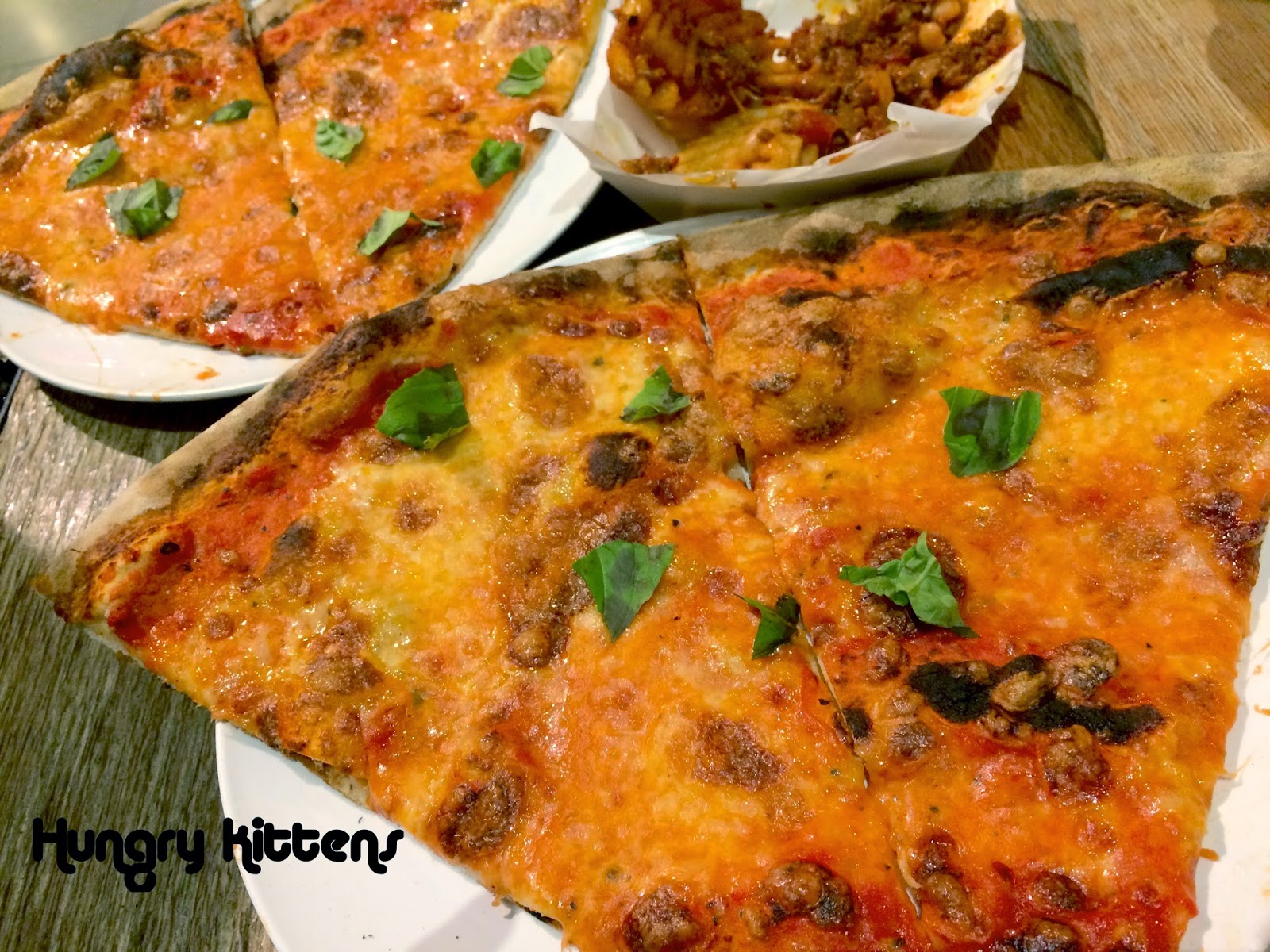 I was surprised to see just how much a 'slice' of pizza was. In fact, it would more accurately be described as TWO slices, because each of us was presented with 2 huge slices. The bases were lovely and thin but puffy at the edges and lightly charred and crunchy. These were the best pizza bases that I've tasted in a while. The topping was simple but very flavoursome and fresh. The tomato paste was well balanced and I enjoyed the pops of fresh basil.

I'm really glad Kat convinced me to try Slice of New York. Not only was the pizza delicious, at that price the serving size is phenomenal. We ended up taking a slice each home for later. I like that the place is licensed for beer, wine and cider. I loved the waffle fries. It's awesome that something like this has opened up in Carindale. I can't wait to go back for more.