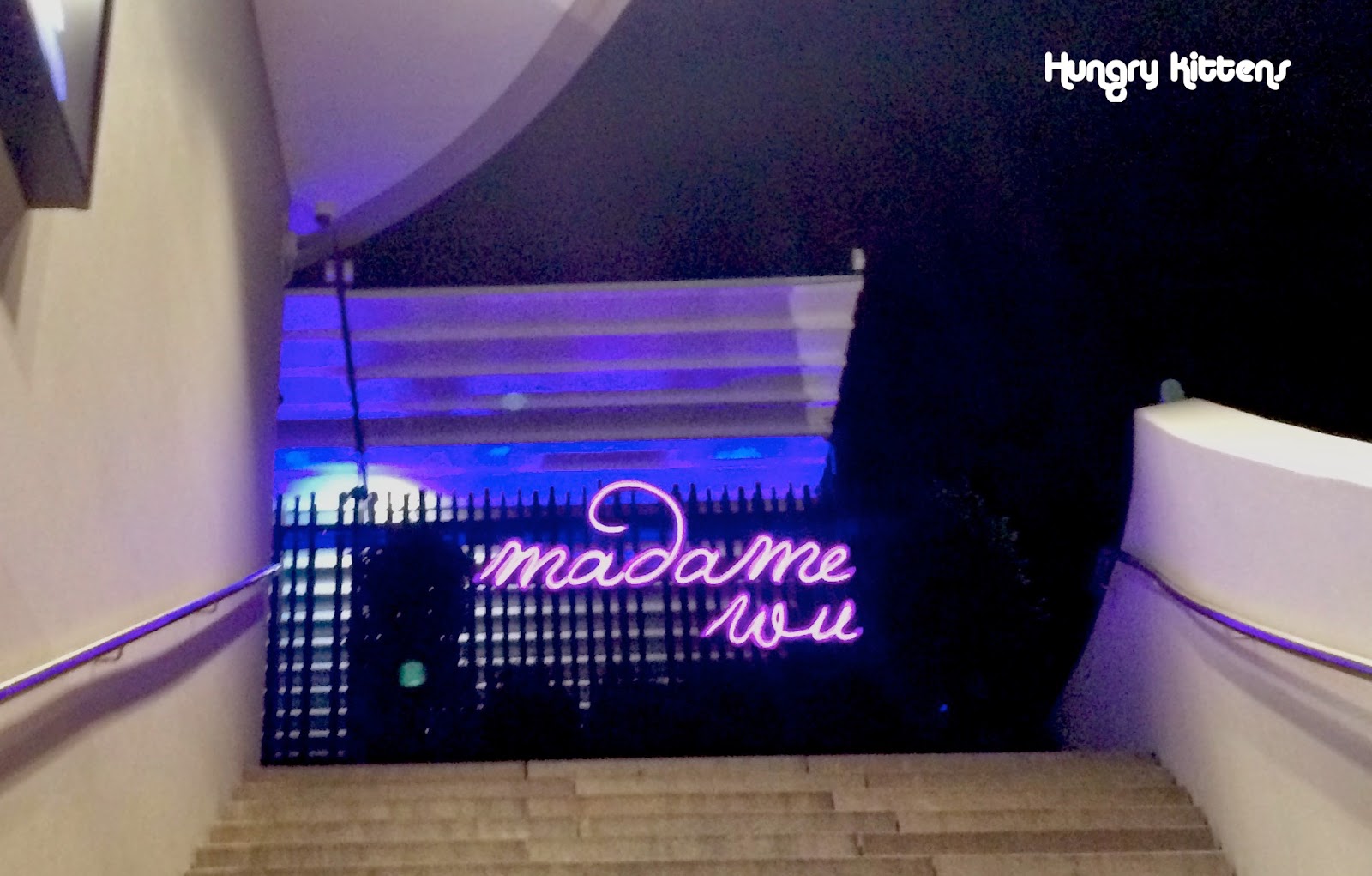 It's that time of the year again, what I like to call 'my birthday week'. My actual birthday was still looming in the semi-distance when I started using it as an excuse for every unnecessary shopping/eating experience for this past month. I'm sure I'm not the only person who does this. 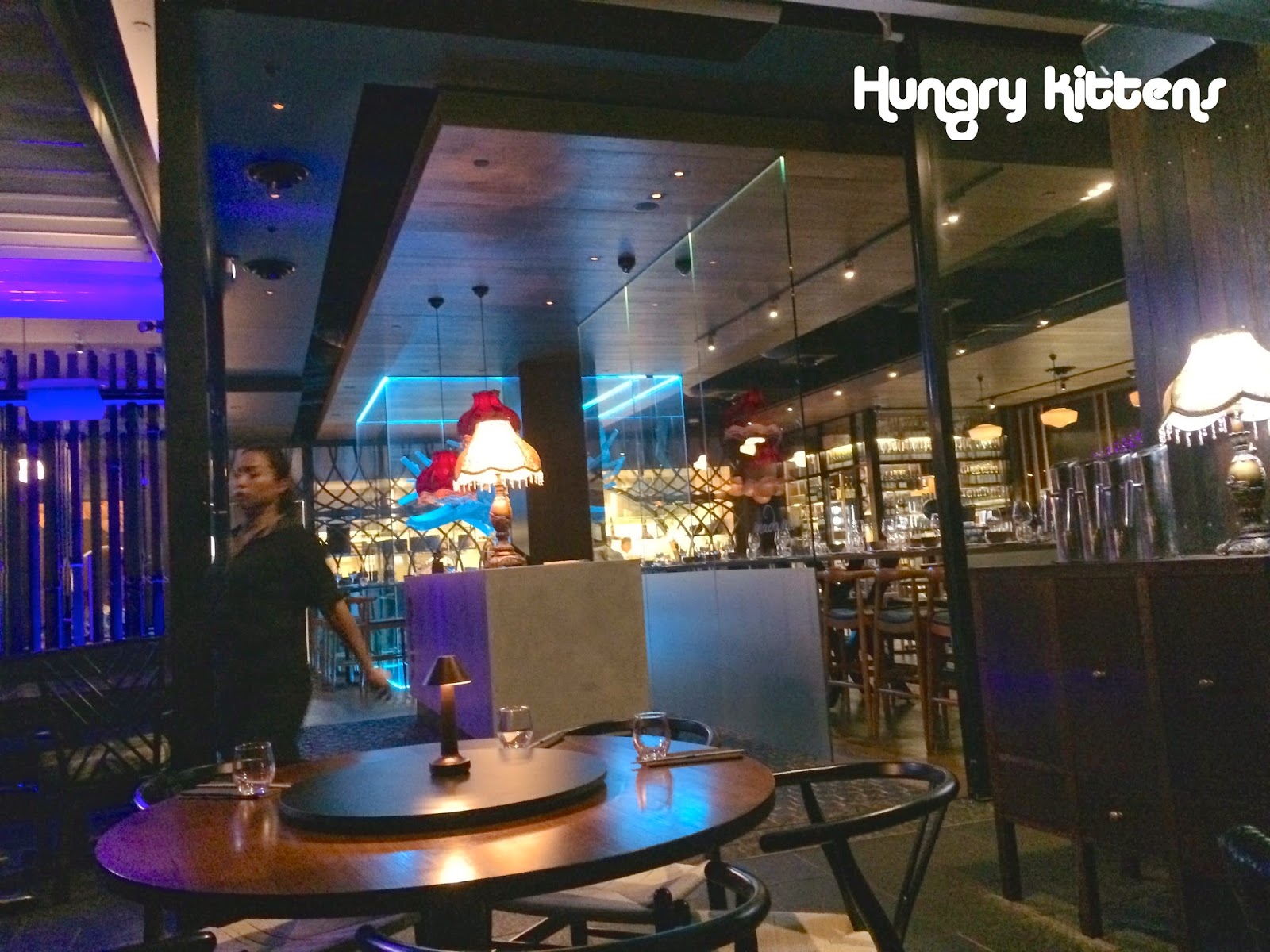 A couple of weeks ago, my friend PDizzle recommended Madame Wu to me and he made it sound so good that I instantly put a plan into motion to get there. This involved sending the website URL to Marc, followed by a not so subtle hint of "it's my birthday soon!" Because we had activities lined up all weekend, we ended up bringing this dinner event forward to last Wednesday night.


We made a booking for 8pm and after a complete misstep in the getting ready process, we went into a panic when we realised there was no way we'd make it in time via public transport. Drinks had been had so driving was also out of the question but Uber came to the rescue and we ended up at Eagle Street Pier with minutes to spare. It took us another good chunk of time to actually find the restaurant but for anyone else who might end up in the same boat, it's on the river side of the dining strip, located above Kingsley's. 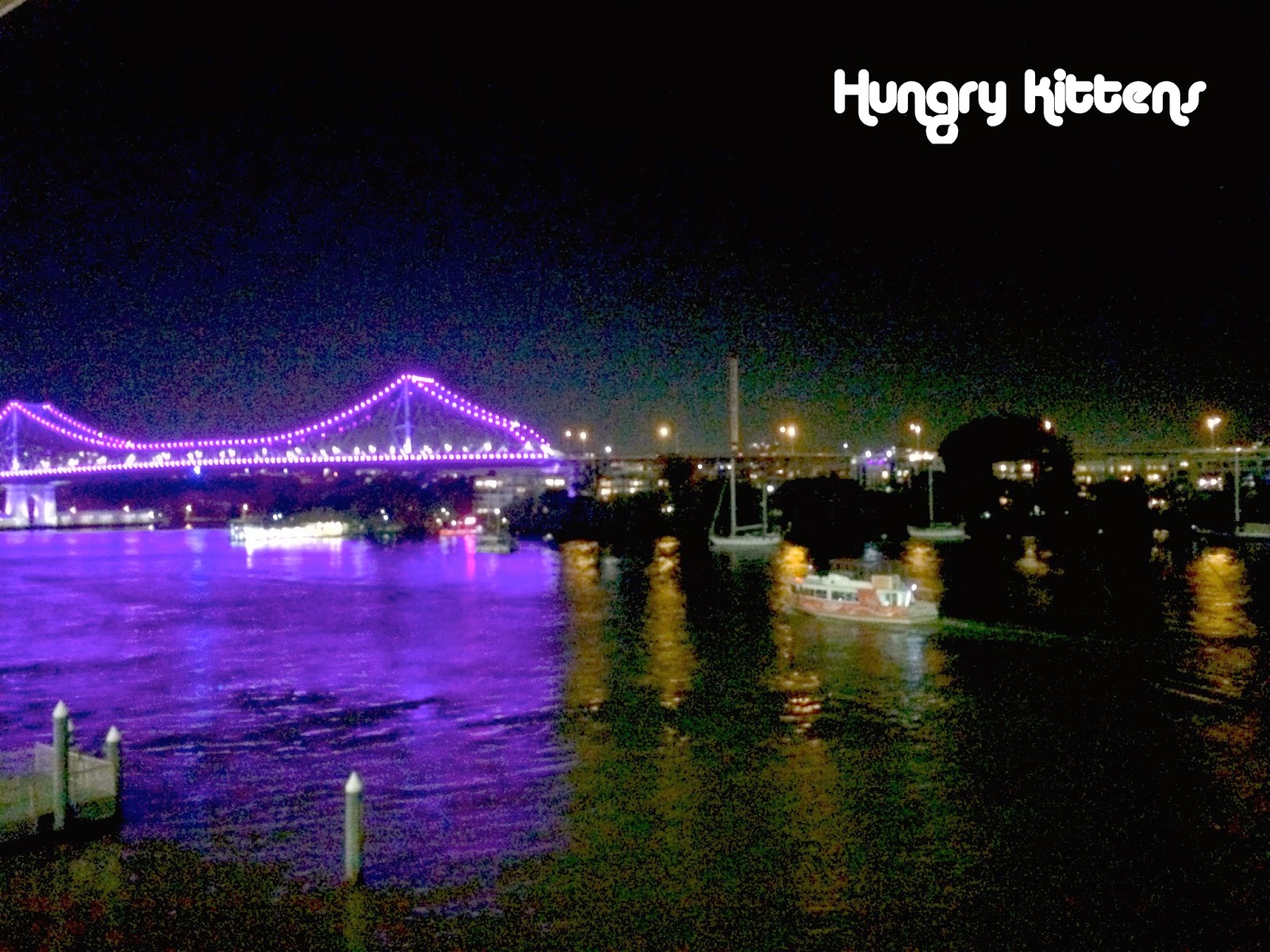 Madame Wu is a large restaurant slash bar. The decor is exactly what I expected it to be, sophisticated yet funky with the odd 'Asiany' element. The place to be for food is the balcony. The view of the river is uninterrupted and stunning. We were placed at a small table right by the railing, which was as perfect as perfect can be.

To make the most of the night time views, the balcony has minimal lighting. There was a little mushroom lamp that illuminated our table. Marc and I used it as a torch to help us read the menus (you know you're old when you need help reading menus) and later, when the food came, we also moved the light around to help me take photos. If it wasn't for our nifty lamp helper, all I would have captured is darkness on plate shapes. 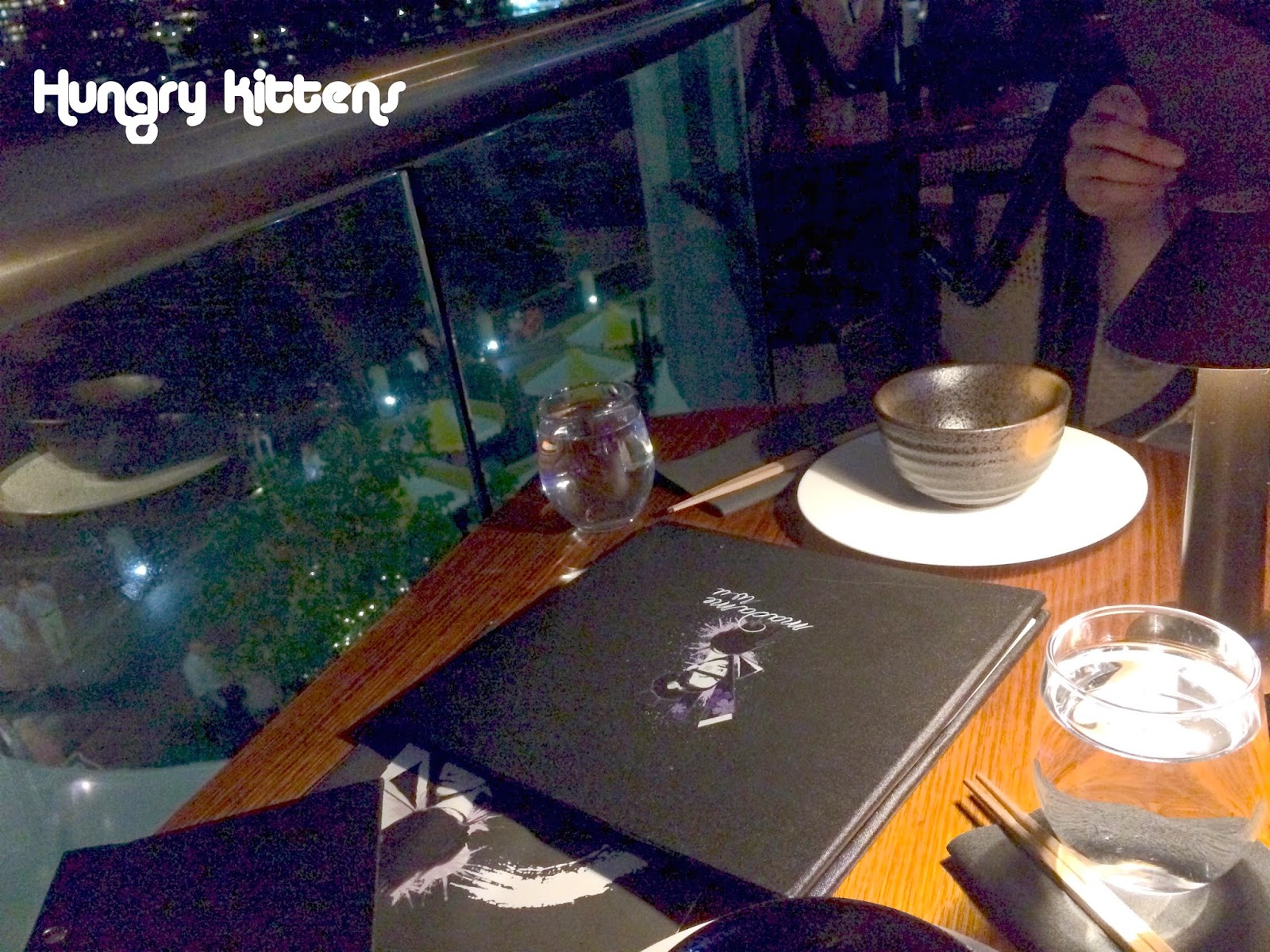 The menu at Madame Wu is modern Asian with plenty of tapas-sized share options as well as conventional mains and sides. We pretty much knew what we were going to order because I was going to follow PDizzle's exact recommendation. This involved a cocktail jug and a banquet selection for the both of us (we went with banquet 1). 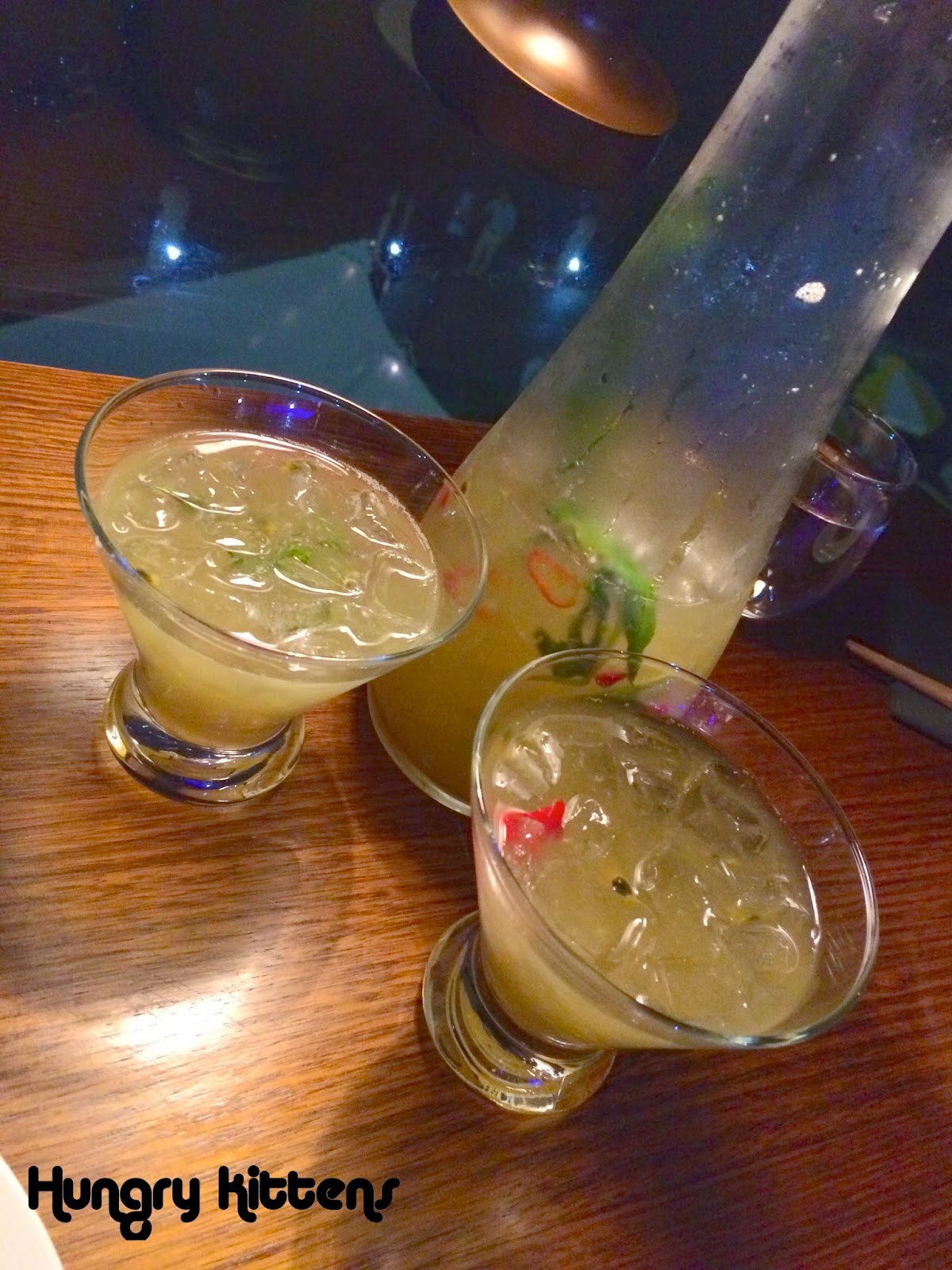 Our shared cocktail pick of the evening was called the Bruce Lee. With elements of rum, basil and chili, I wasn't sure how drinkable it would be.This turned out to be a really nice drink! The savoury components helped cut the sweetness and kept it quite summery and refreshing. It complimented most of the food items that we tried that night. I enjoyed the coconut notes throughout.

The banquet options comprise of a set menu of dishes that fill the role of starter, main, sides and dessert. It's like a degustation in a way because some of the main dishes are brought out in smaller sizes to allow for more variety. I very much like this style of dining because if I had to choose just one main from the list of desirables, it would have been difficult. As it was, we got a taste of most of Madame Wu's menu highlights. 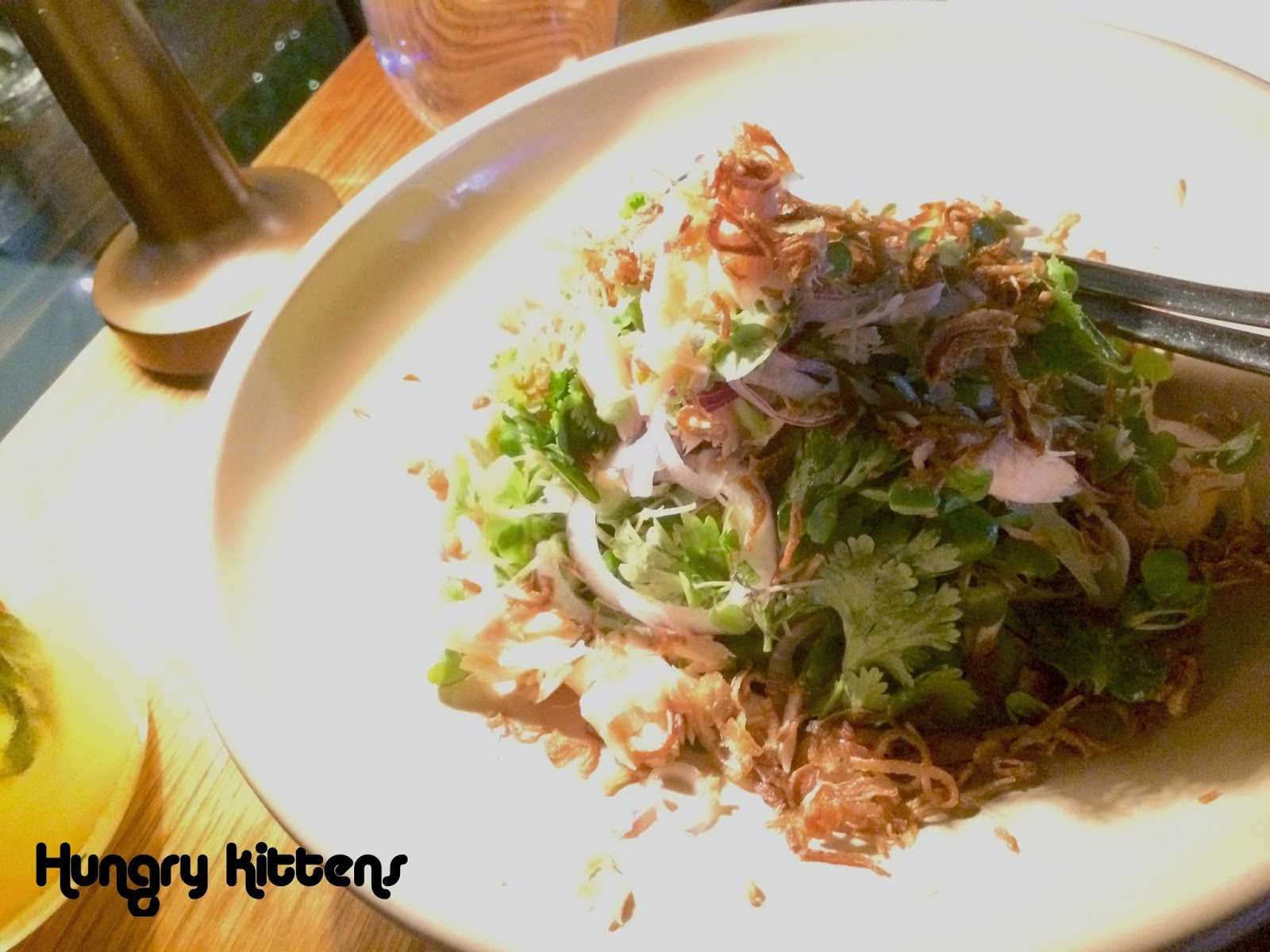 The first dish that was brought out was the ocean trout salad. I know that salad is generally considered boring and only ordered when people are trying to be healthy. Even Marc agreed that this one was really tasty. The smoked fish was wonderfully cured and had a richness that was well-matched by lashings of fresh coriander. . Crispy shallot pieces add interest to any dish and this was no exception. 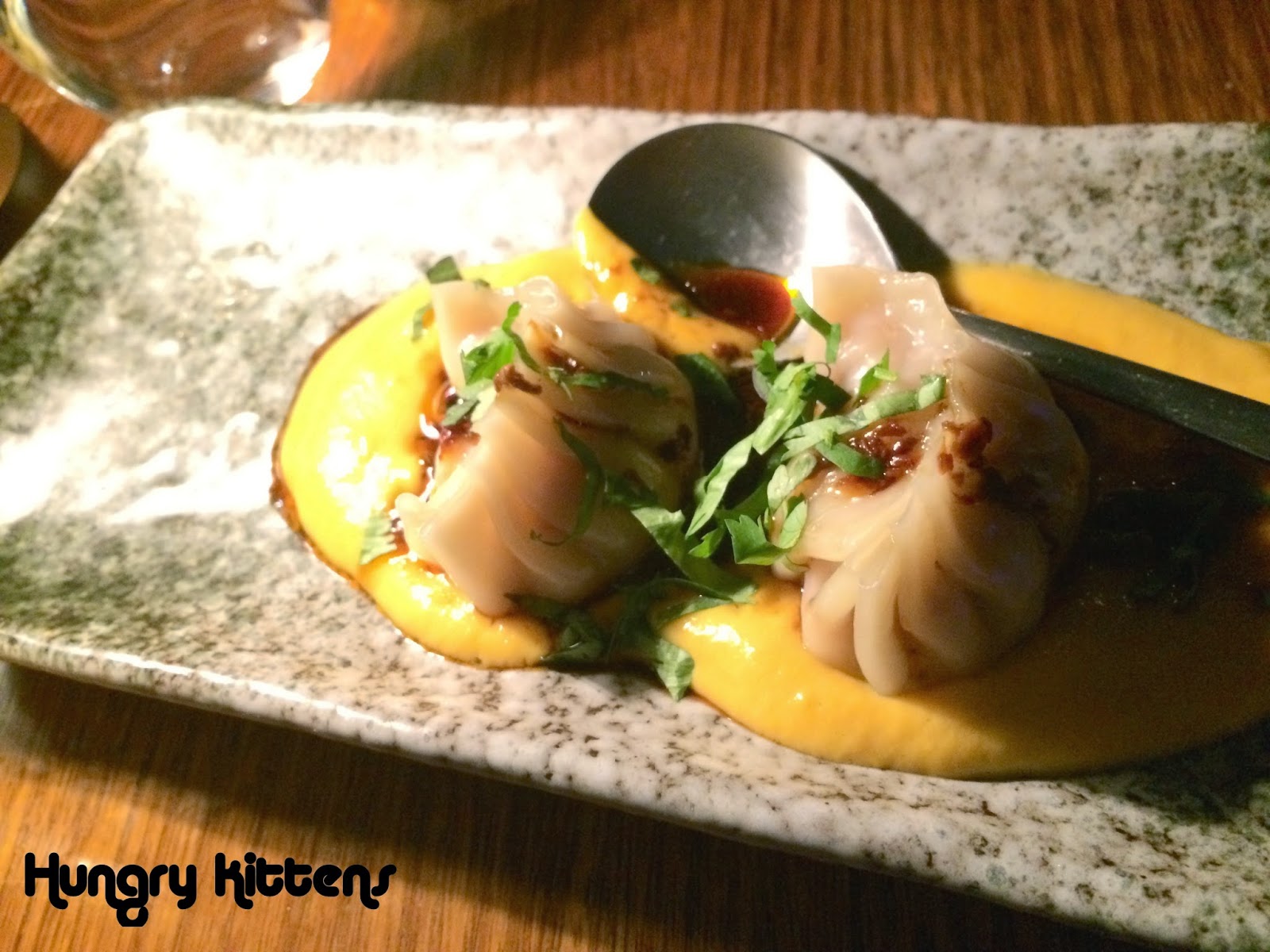 I tried the dumplings next. We had one with pork filling on corn puree. This was much spicier than I expected, but in a good way. The filling was nice but tasted a bit generic. The corn puree didn't leave too much of an impression. 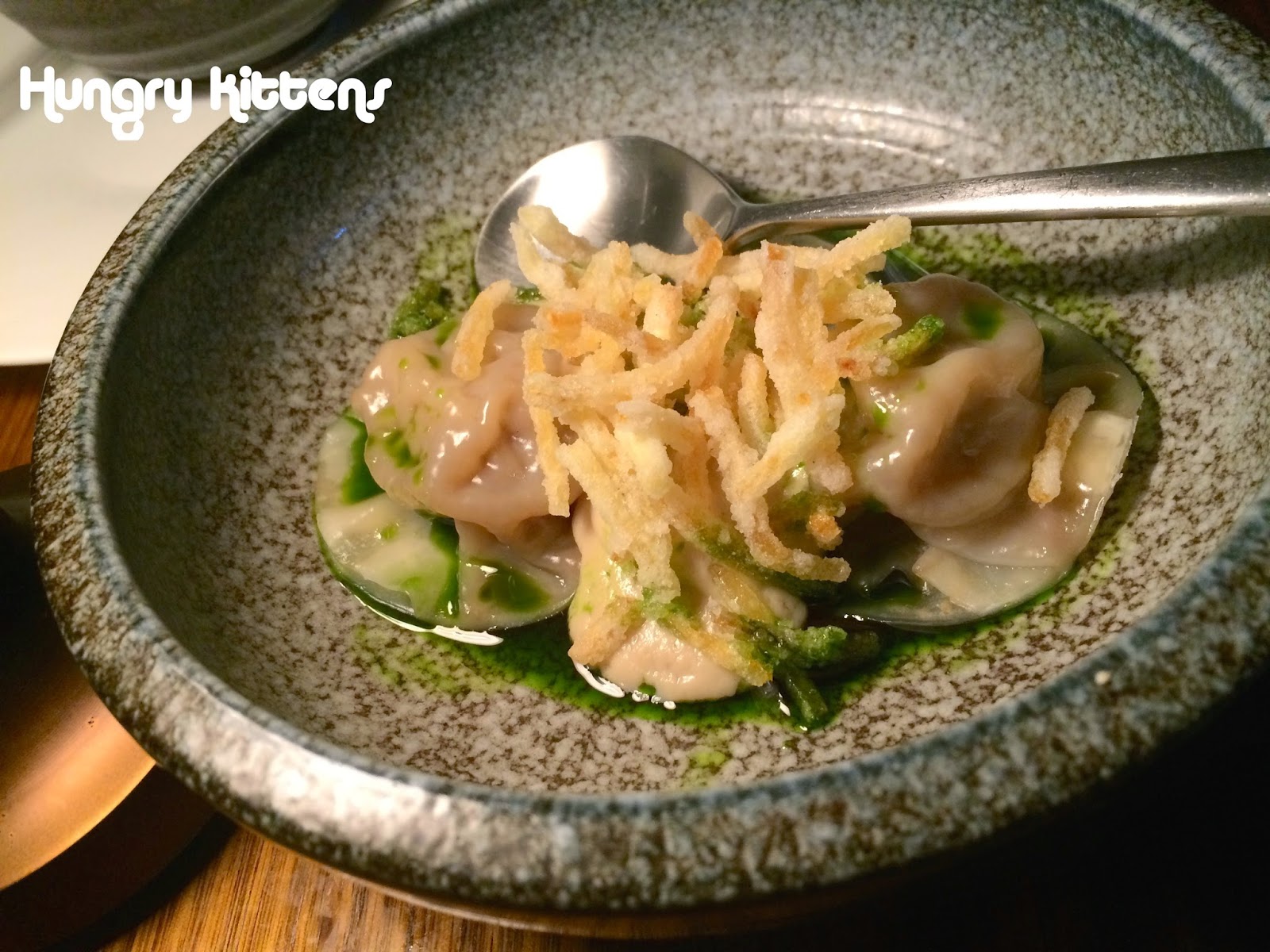 We both liked the wagyu dumpling much more of the two. This was incredibly juicy and soupy. I think that's so important in a dumpling. The coriander oil complimented nicely and both Marc and myself were weak over those little potato chip toppings. I don't care what any gourmet snob might say, to me there's little in the world that beats fried potato. 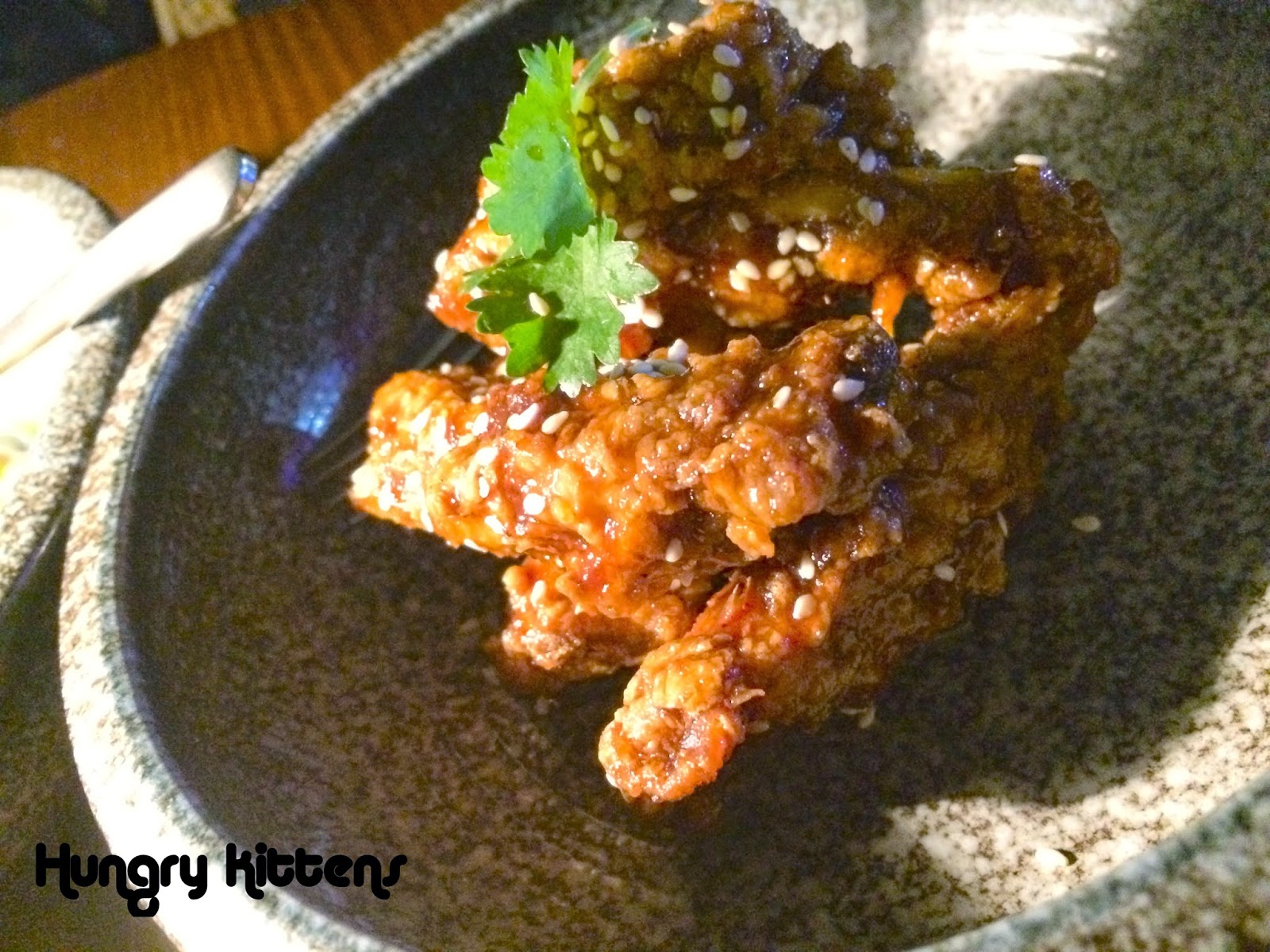 The chicken ribs were sweet, crunchy and coated with white sesame seeds. They reminded me a lot of Korean fried chicken, which has a candied fried exterior. If anyone remembers how obsessed I got over Korean fried chicken at the end of last year, it shouldn't be a surprise that I loved the taste of this dish.

Now that we had completely demolished the starters, we were ready for the mains and sides component of our banquet. Amusingly, we had to be brought out a second table to fit all the plates. Our mains comprised of a snapper fish, beef cheeks and pork hock. The sides were wok greens and pumpkin. There was also steamed rice to accompany the dishes. 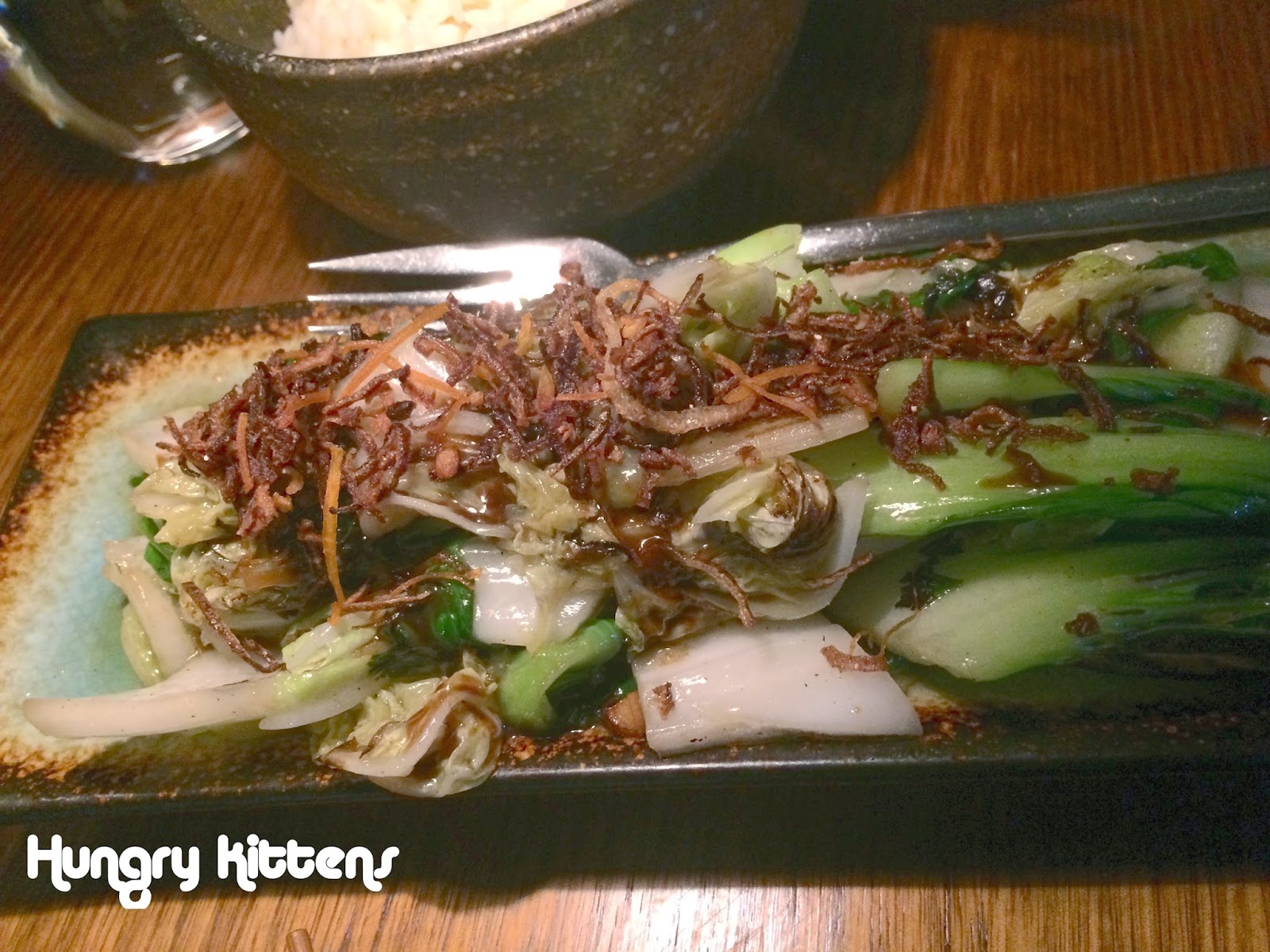 I can't remember why but the first item I tackled out of this lot was actually the bok choi. Even though it was just a side and a common Chinese vegetable side at that, it was really tasty. I commented to Marc that it was quite amazing something as boring as bok choi could taste so good. Fried shallot was another key factor here, as well as the sweet soy used for flavouring. Best of all it had a wok-charred aroma. 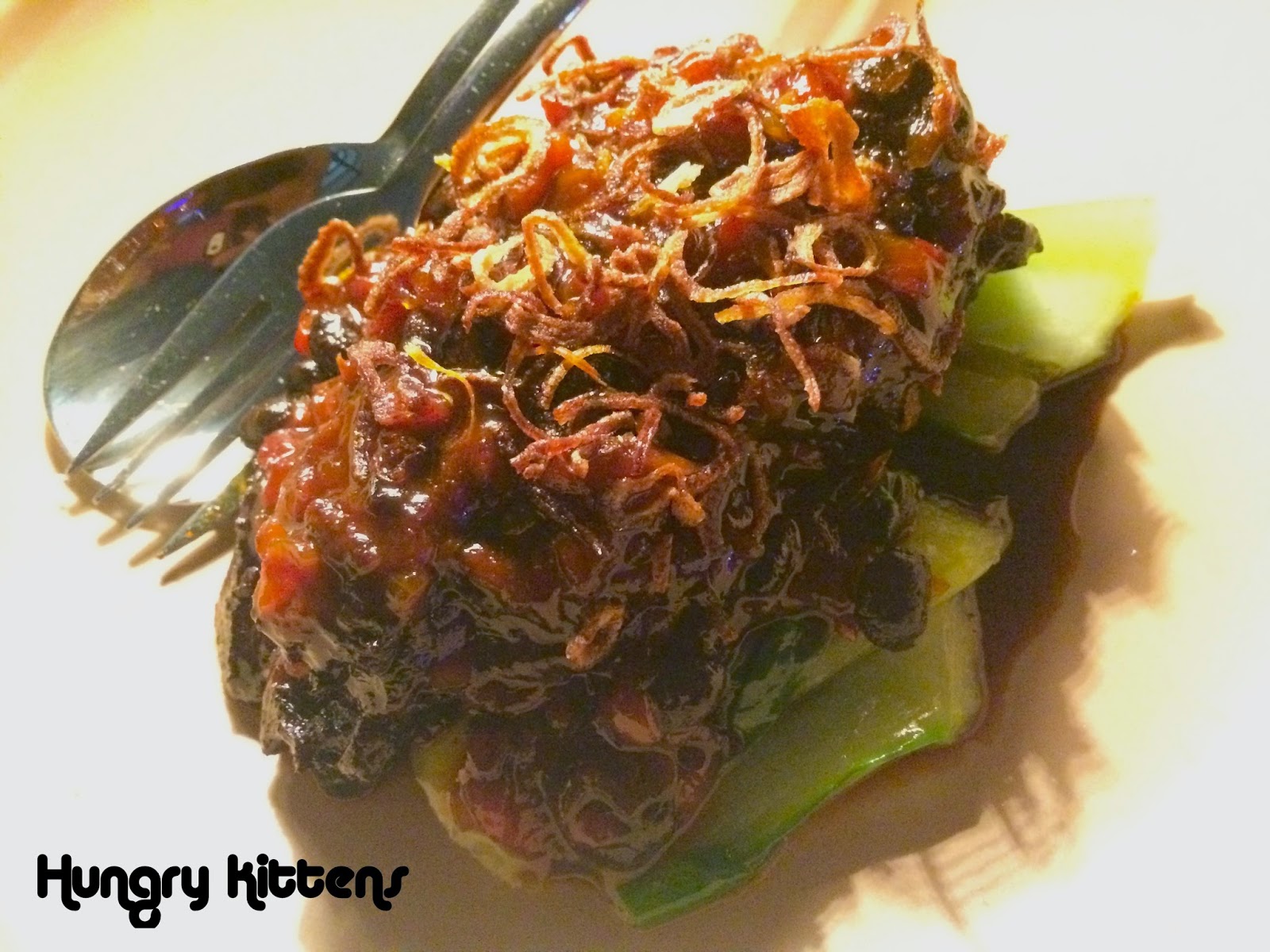 I sampled the beef cheek next. This was chopstick-tender and very, very flavoursome. In fact, it had so much flavour that as much as I don't like to eat rice, I had to dish out some rice to accompany the beef cheek. It was very tasty, comforting and moreish but perhaps a tad too sweet for my palate.

The snapper was next closest on my plate so I gave that a try. It was fine but left the least impression on me, maybe for no reason besides the fact that I don't really like fish. It also managed to be very tender but I think the batter could have been crispier. 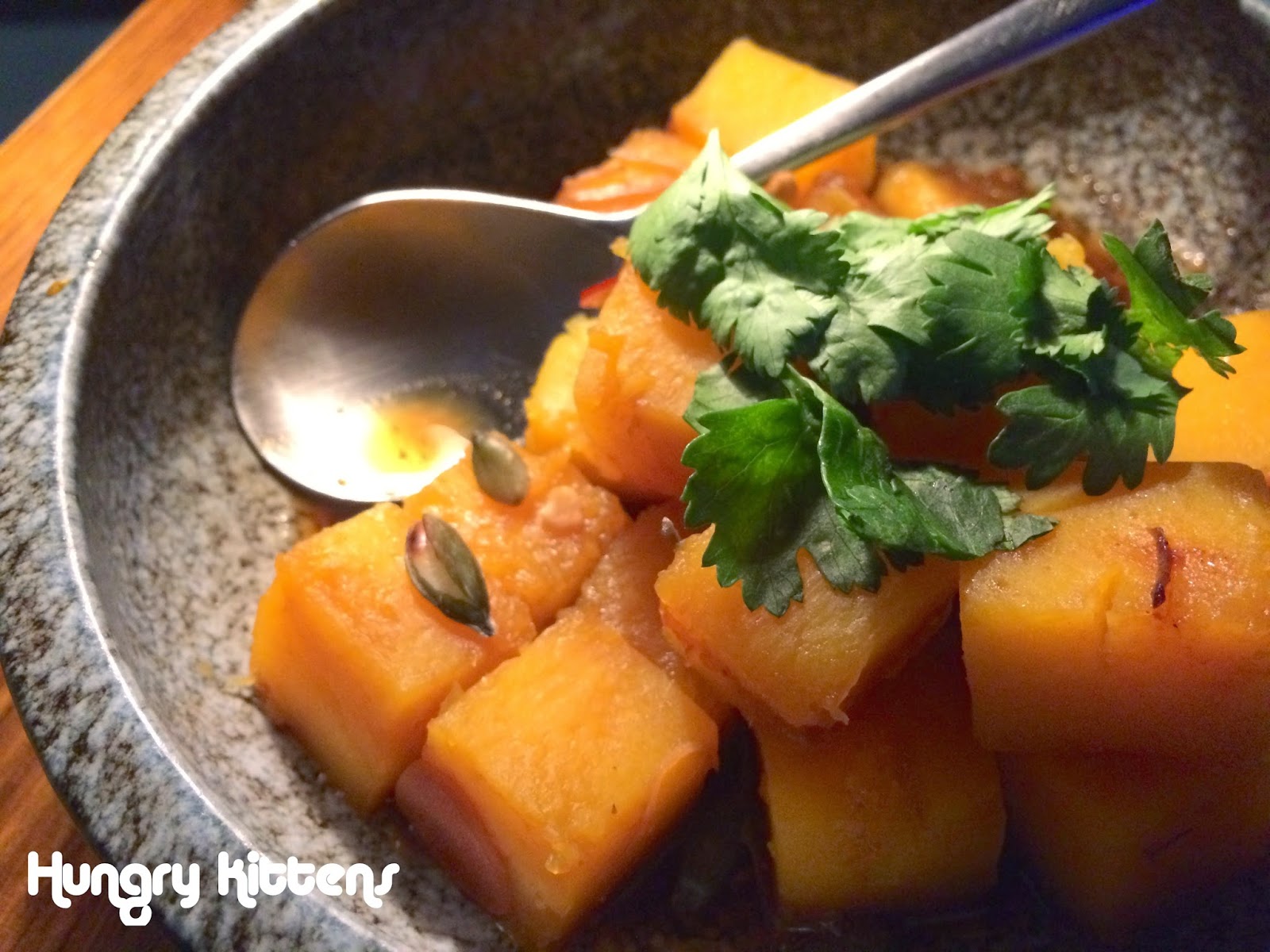 I liked the sound of the pumpkin when I read it on the menu, especially because I'm generally a big fan of pumpkin. It tasted fine but was also overshadowed by all the superior, more interesting dishes of the night. I think the pumpkin ended up being one of the only things we didn't finish because our stomach space was favouring other food. 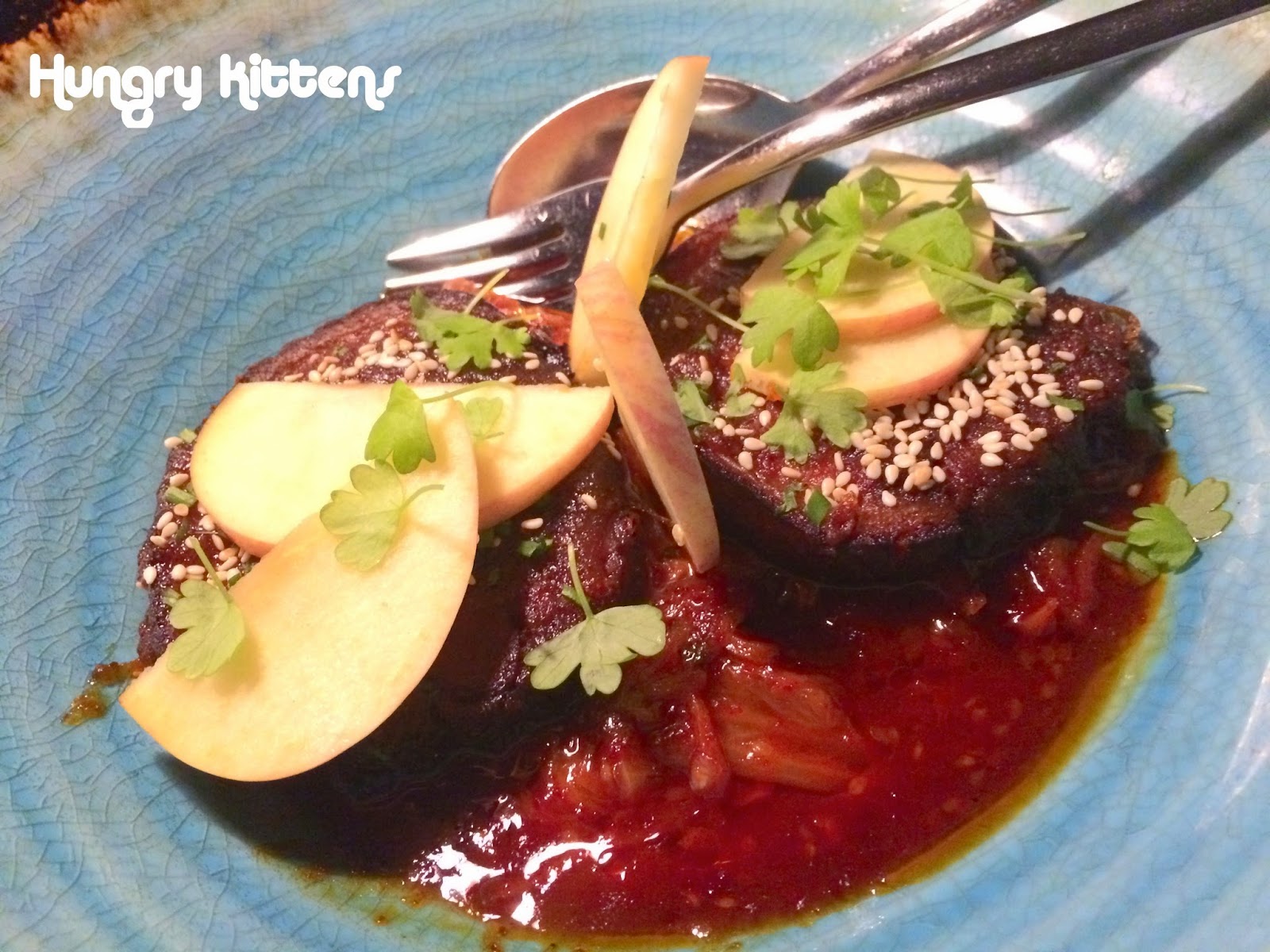 The pork hock was another dish I was another dish I was super excited about when I read it on the menu. However, when our mains were actually brought out, I completely forgot about it. Maybe it's because it was left on our side table, too far for lazy hands to reach but also, it was decorated with apple slices so I sort of wrote it off as another fancy salad. When we finally got to investigating what this was and discovered it was the pork hock, my excitement reignited. In a way, I'm glad we left this till last because it was sooooo delicious and allowed us to end our mains on a distinct high note. Even though it had been sitting there unnoticed, the pork was stil crispy and succulent. The fresh apple slices acted as a lovely palate cleanser. We absolutely cleaned up our mains and sat back, waiting for dessert. 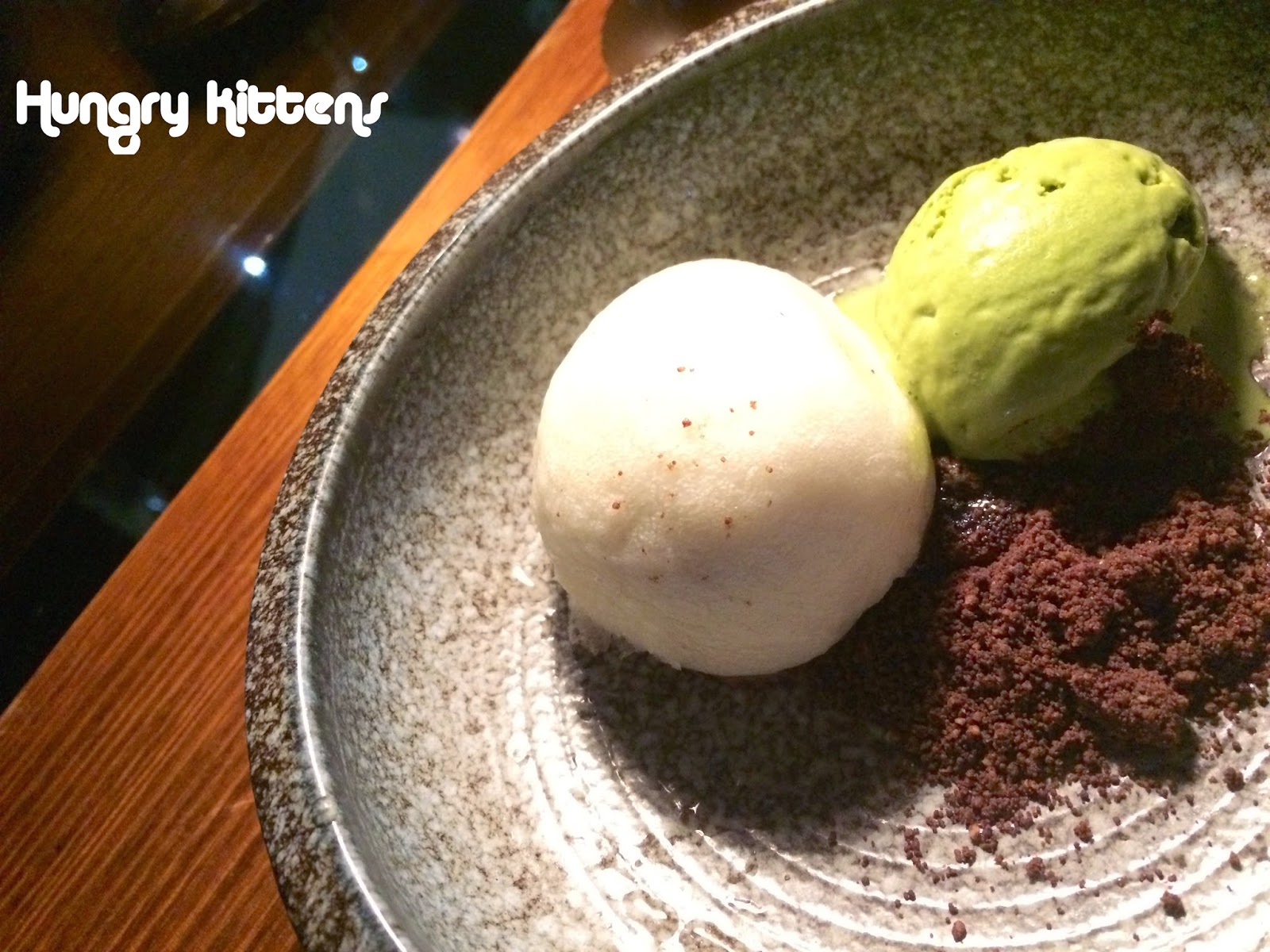 I was skeptical when I read 'steamed bun' under the dessert description. Sure, there are traditional custard buns in Chinese cuisine that are yum but I just couldn't picture how it would work with chocolate. It worked surprisingly well. The bun was filled with a hot chocolate sauce, bringing to mind a hybrid steamed bun lava cake. We loved the little milo-y crunches too.

I'm not exaggerating when I saw Madam Wu is our favourite new dining experience of 2015 (and even possibly 2014). The dishes are innovative and interesting but most importantly, very tasty. We loved the idea of a banquet that allowed us to try many dishes in one meal. The cocktail we tried was delicious and I would love to go through their whole cocktail menu. Ambiance was A+ and service was fast and friendly throughout.