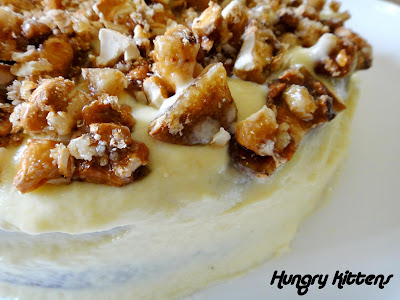 We had a banana crisis in our house last week. Usually, bananas get eating up fairly quickly because they're easy to eat and don't require washing or cutting (we're very lazy). This particular bunch contained GIANT bananas that no one seemed to want to touch. Mum went through a few by cutting them in half and eating a bit at a time but by the end of the week, we had these giant, browning bananas and dad, who never gives me baking requests said 'please do something with those'. 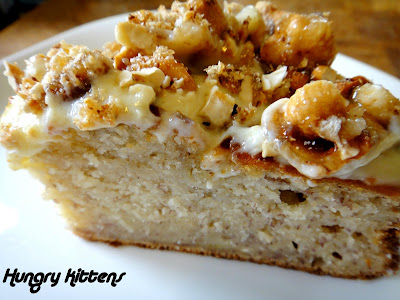 I've made many banana breads before so to try something different, I typed banana cake into Google to see what would come up. I was instantly attracted by this recipe and ended up using it. I followed it for the most part but forgot to buy sour cream so I substituted that for yogurt instead. I know it's normal to substitute natural yogurt for sour cream but I admit mine was just a normal flavored tub, the type you snack on. The cake still turned out fine and I couldn't taste any of the yogurt at all... though, if you must know, I used 'stick date pudding' flavor. I also modified the frosting a bit (left out the sour cream).

What attracted me to the recipe was the use of white chocolate. I had an amazing carrot cake at Planet Matterz and I'm convinced they had white chocolate in their cream cheese frosting. I wanted to try it for myself. What I didn't like about the recipe is the lack of nuts. To me, a good banana bread has to have nuts. I know this is a banana 'cake', technically, but I couldn't get around the idea of biting into anything banana flavored that didn't have a crunch.

I rummaged through the pantry and found some cashew nuts. I was going to just toast them and pop them on top for decoration but in the end, decided to make a salty praline. It turned out to be the best part of the cake.

For the cake
For the frosting
For the praline
Procedure:

1. Preheat the oven to 175 degrees Celsius. Line a 22-23cm diameter springform cake tin.
2. In a stand mixer, combine the banana and sour cream/yogurt.
3. Add the eggs, vanilla and lemon zest and mix until combined.
4. Add the sugar to the banana mixture.
5. Gradually add the oil, beating until completely mixed. 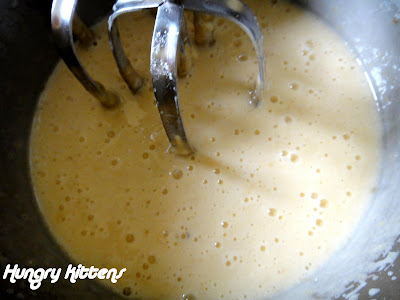 6. Sift the dry ingredients together and add to the banana mixture on low speed until completely combined.
7. Pour into the prepared cake tin. I found the mixture to be quite runny. 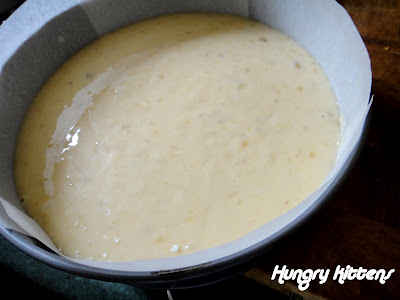 8. Bake for 40-50min until an inserted skewer comes out clean. Remove from oven and cool in tin for 10min before turning out onto a wire rack to cool completely. 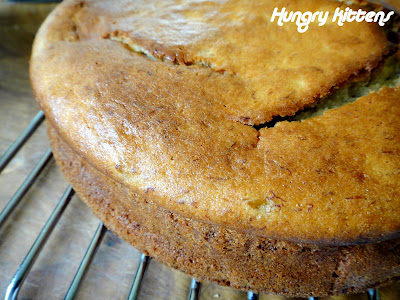 9. To make the frosting, first melt the white chocolate in a double boiler or in the microwave. My parents just got this awesome induction cook top which has a very precise temperature setting and I can melt chocolate straight from the saucepan. Set the chocolate aside to cool slightly. 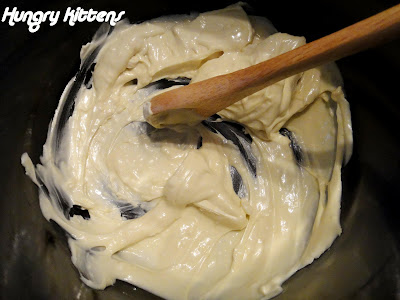 10. Beat together the cream cheese and butter. Add the cooled white chocolate and mixed until smooth. Mine was very soft after it was all mixed so I did what the recipe suggested which was to place the icing in the fridge to firm up before frosting. 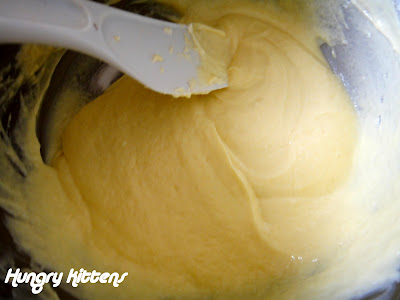 11. To make the praline, crush the cashew nuts and toast on high heat until golden.
12. Reduce the heat to medium and add the white sugar and salt. Constantly stir and you will see parts of the sugar beginning to liquefy. 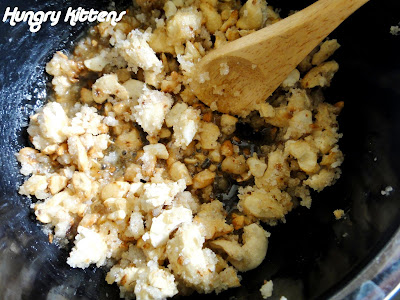 13. Once all the sugar has melted, it will start turning golden. You must remove it from the heat immediately or it will burn.
14. Spread the mixture onto a piece of non-stick baking paper on a hard, cool surface and let it set till hard. 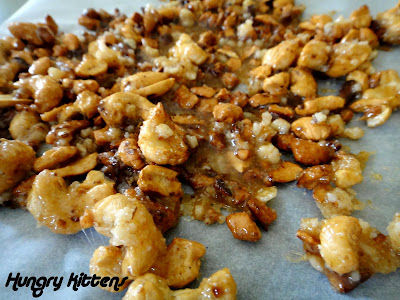 15. Break up the praline into little pieces to use. 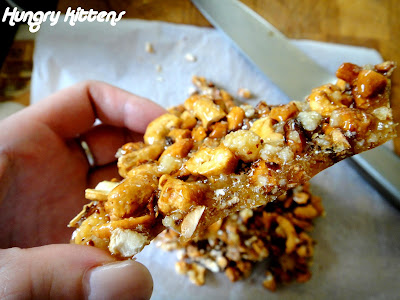 16. To assemble the cake, spread the frosting over the cake and sprinkle the praline over the top. I tried to make a nice pattern but soon gave up. The frosting melts easily so you may need to refrigerate the cake before serving. 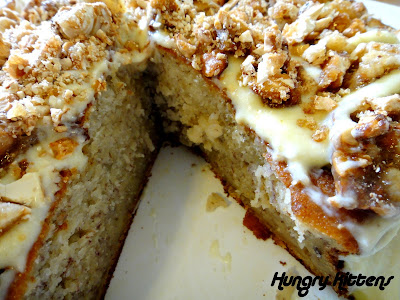 A few points... the recipe for frosting (above) produced way too much frosting than required for this cake. It was a delicious frosting but flawed in some way because it goes runny so easily. I suspect there was too much cream cheese and butter and not enough chocolate. 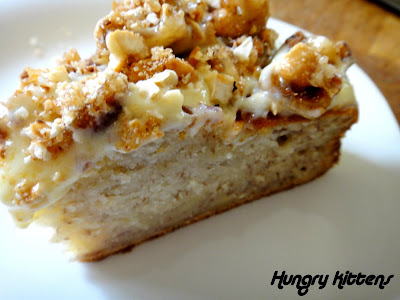 The cake itself was very nice. It has a moist, dense, almost pudding-like texture. I was really excited about using the lemon zest in the mixture but unfortunately, couldn't detect any of it in the actual cake. 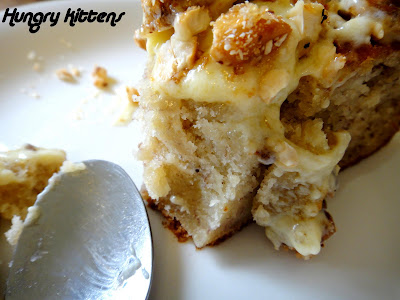 As I mentioned at the start, the cashew praline was the true hero of the cake. It added not only texture but also a nice saltiness that cut the sweetness of the white chocolate. I would be happy to eat the praline on its own too!
Labels: Baking, Cakes and Sweet Slices, Decadent Snacks, Dessert, Home Cooking, Something Sweet