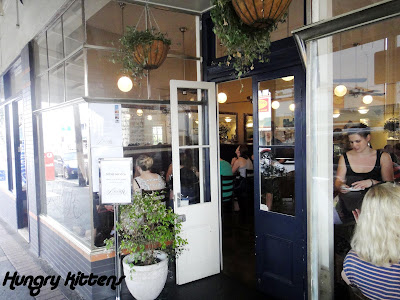 I've started the grueling task of Christmas shopping. One of my stops was a gourmet food store (Gourmet Providores) on Given Terrace so we decided to also get lunch around there.

It's been a while since I ventured onto Given Terrace. I remember the last time I went, I spotted a cafe that I wanted to try. We walked past it again yesterday and I realized it was Anouk. 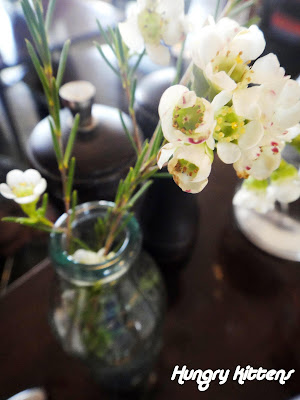 Anouk was packed. We decided to try our luck by asking for a table and if there weren't any free, we would move on to someplace else. Amazingly, we acquired a table for 2 (what appeared to be the last vacant spot in the entire cafe). 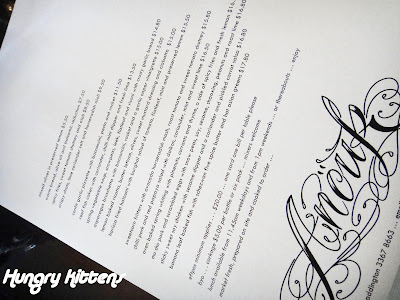 The waitress pointed out some specials that were written on a large mirror (artistic but a bit difficult to read) and we were also given single-sided menus that contained some nice brunch/lunch offerings. 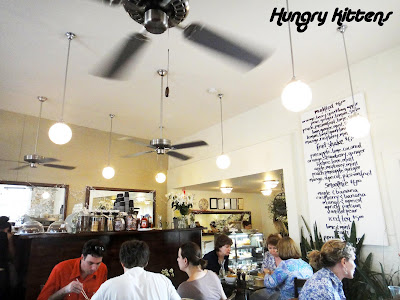 There was also a beverage menu and one of the walls in Anouk was decorated with even more refreshment options such as unusual blends of smoothies and muddled fruit drinks. On a hot day like yesterday, I found these drinks to be more inviting than anything else on the menus. 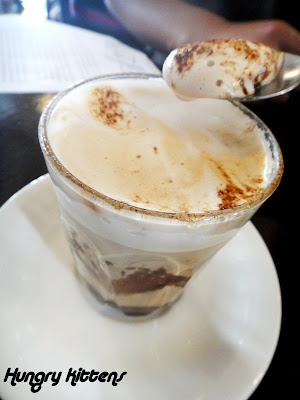 We ordered a lunch item and beverage each. I assumed Hien would also be getting a cold fruit drink and shooed the waitress away when she asked if we'd want any coffee to start with. Amazingly, he asked for a hot mocha. Maybe I'm just more heat intolerant than everyone else? I can't even bear the thought of a hot drink on a hot day. 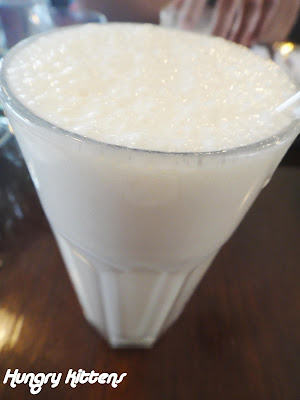 After much umming and ahhing, I went for the pear and vanilla smoothie. When it came out, I couldn't decide whether or not I liked it. It had a strong vanilla flavor and a strange sour aftertaste that I assume was the pear. What I like is that it wasn't very sweet and it's possible that all the sweetness came from the pear. I hate drinks that are too sugary. It reminded me of a drinking yogurt and I liked it enough to finish the whole thing but couldn't eliminate the feeling that I made the wrong choice and missed out on something potentially better. 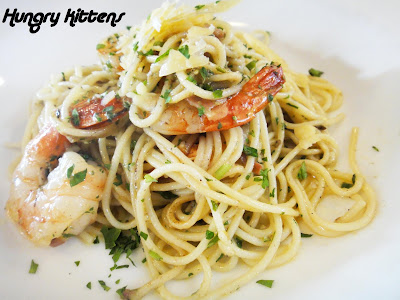 Hien ordered from the specials menu and chose the prawn spaghetti in pesto. The serving size was rather small but the ingredients were fresh and the pasta had good flavor. 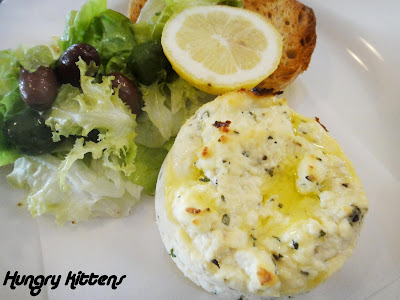 I chose the baked ricotta. I didn't know what to expect. I thought it might be a salad but I had a feeling they would bring out a whole lump of baked ricotta. That's what it turned out to be! Ricotta is a very, very mild cheese (my polite way of saying bland) and I've used baked ricotta before whilst making canapes. I thought it was a bit like textured air. I actually really enjoyed this baked ricotta though. It was warm and soft with an interesting texture (cross between chewy, crumbly and melty). It had a very subtle herb flavor and was nice with the tart salad dressing, olives and sour ciabatta. I'm also under the impression that ricotta is a healthy cheese because it has a relatively low fat content. Extra win!

Though Anouk was extremely busy, we experienced excellent service. The cafe is decked out nicely and would have been a comfortable environment if there was a tiny bit less people (it was hard to talk because everyone was chatting loudly). I thought the food was great and I was excited about several of the menu options, which made it difficult to choose but encourages me to go back. My drink was a slight disappointment but only because there were so many others I wanted to try.
Labels: Breakfast or Brunch, Cafe and Bistro Dining, CBD and Surroundings, Dining Out, Favorite Restaurants