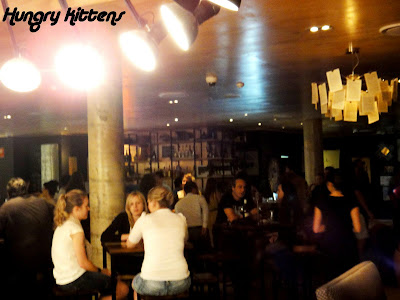 I'd heard about the Archive two for one special a few times from Hien but just never really paid attention. Then, I stumbled across the information myself and told him on Facebook 'hey, check this out!' and he did the whole exasperated 'I told you this already' thing. 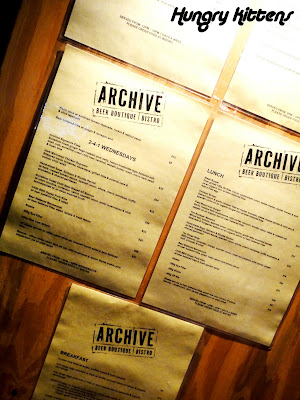 Irrespective of whose good idea it was, we went to Archive tonight to take advantage of their sweet deal. It is located in West End beneath the Uber night club. As I approached the restaurant from across the street, I said 'it looks pretty quiet'. The moment we stepped up to it (passing the bouncer who checked ID and decided we were of legal dining age), I ate my words... the place was packed.


We hovered around the counter waiting to get served (you pay first and grab a table number) and I was offered the role of finding a table. I declined, deciding that it was too scary guarding a table on my own in what is predominantly a pub-like crowd. Well, I think it's pub-like. The crowd would probably prefer to be labeled trendy/fashionable/alternative. Or might shun the idea of being labeled at all. Anyway, you get the drift. 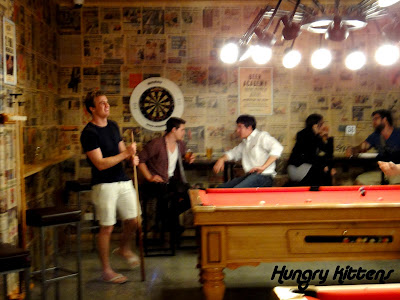 Archive is decked out to suit its clientele. The walls are plastered with old news papers (but wait, Hien read one and it was dated 2010) and there are lounges, bar stools, pool tables and a dart board (that was right near my head). It would have been a laid back environment on a quiet day but while we were there, I could barely hear myself speak and ended up hoarse from trying to have a conversation. 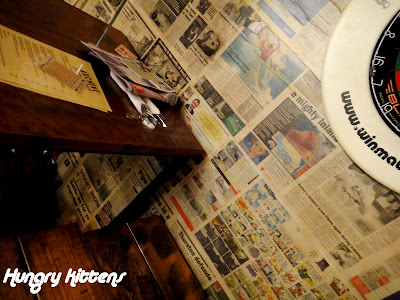 As the title of this post suggests, there is a 2 for 1 special on Wednesdays. The menu I saw tonight was slightly different to the one on their website. We waited a long time for the food, which was to be expected given how busy they were. 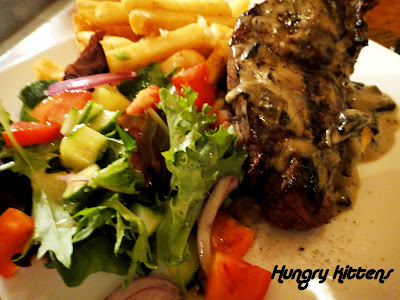 Hien chose the sirloin steak with mushroom sauce. It comes with a salad and chips. We were disappointed with the steak itself. It was tough and tasted 'old' (according to Hien). He asked for it to be cooked medium rare and it was cooked to about that level though, which is a positive. 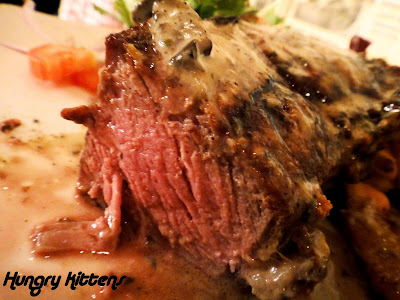 The salad is said to have a dark ale jus which sounds good on paper but tasted like a standard vinaigrette to me. The beer battered chips, however, were delicious. I just had 2 to try and it was all I could do to prevent myself from stealing more. Crunchy and savory... very nice.

I ordered the Archive signature plate based on the name, without really knowing what was in it. I imagined a huge platter of things and despite my hunger, was dreading it a bit in case I had bitten off more than I could chew. Thankfully for me (maybe disappointing to other people), it was a lot smaller and delicate than I expected. 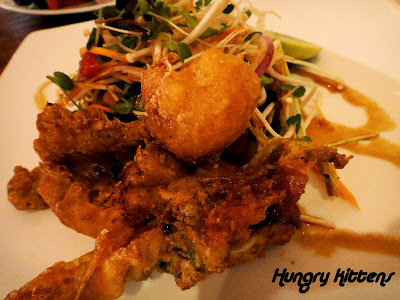 The first thing visible is the soft shelled crabs which are easily the best I've ever had. I detect something like sweet potato in the batter too because there were crabby parts and there were sweet tempura vegetable like parts too. The batter was loose and crunchy without seeming oily at all. I would've liked a mayo to dip with bit then again it didn't really need it. Though you can't see it in the photo, there is pork underneath the salad mound. It was sweet and succulent but very heavy/fatty so I couldn't finish it. The salad was beautiful and fresh and surprisingly chili. It was great for cutting the richness of the meat and fried crab. I didn't think much of the beer caramel (didn't even know that's what it was) but the mash was great. At the time, I just thought it was beautiful, sweet and smooth with a richness that made me think of beef stew but the description says 'wasabi mash'. Well, I can't say I could taste the wasabi but it was still great.

I loved my meal at Archive. My signature plate contained a lot more than first meets the eye and was also more filling than it appears. Hien was slightly less thrilled about his meal but he'll probably be back and order what I had instead.

I'd be interested to try the other menu items at Archive too. It reminds me a bit of the restaurant concept by Chris from Masterchef Australia Season 1... mixing beer with food. Many of the dishes at Archive feature beer components. As I pointed out in my above review, some seemed gimicky/noticeable whilst others genuinely lifted the food. The service was slow tonight but likely to be better on other days when there isn't such a good special (you can't have everything!)
Labels: Cafe and Bistro Dining, CBD and Surroundings, Dining Out, Favorite Restaurants, Modern Australian