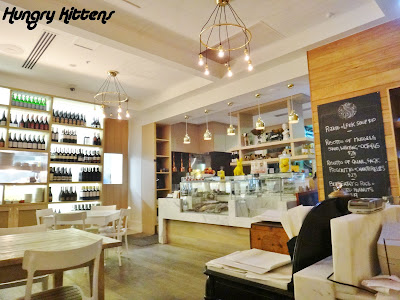 You know life is good when the biggest 'problem' you have all week is deciding between a popular shared dish at a restaurant or picking individual dishes for greater variety. I first heard about Spring Restaurant from the guys at Brisbane Devoured and was a bit sad to see that it had replaced Barolo (even though I didn't love Barolo, it gave me one of the best pasta dishes I've eaten to date). The sadness didn't last long once I started hearing all these great reviews, particularly for Spring's shared slow-cooked lamb dish. 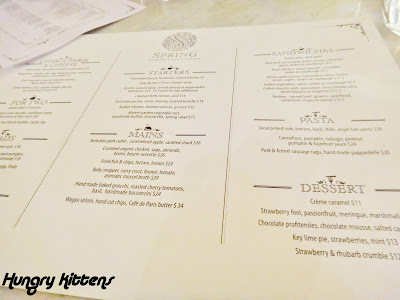 Spring is an interesting restaurant. I suppose it targets the CBD worker crowd because it doesn't open on the weekends. What a pity since their lunch menu sounds mighty appealing but I'm never in Brisbane on a weekday at lunch. I know that Spring is now doing 'Chefs Table' events where you can dine in an intimate environment and watch your food get prepared, listen to the chef and learn about the ingredients. According to the website, they run cooking classes too. 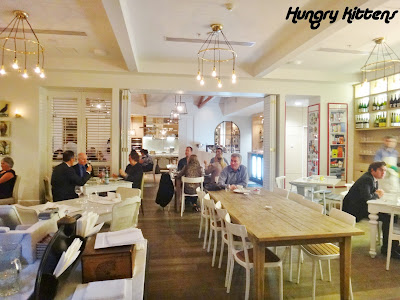 I headed straight to Brisbane after work on Tuesday night just so that I could have dinner at Spring. The next morning, I had a 6am start to rush back to Toowoomba for an orthodontic appointment. If you think this is all crazy, you have to realize I've literally flown interstate for a night of dining before flying back the next day. When it comes to food, this girl doesn't hold back.

Marc and I stuffed up our timing and ended up sprint-walking through the city to get there. We had the last booking of the night so I was worried we'd be told the kitchen was closed. I rang to let them know we were running off schedule and the girl on the phone was extremely forgiving. I swear I am the most punctual person in the world, so much so that I make a conscious effort to slow down and do extra things so that I'm not always early to things... so you can use the process of deduction to figure out which of us let the team down ;). 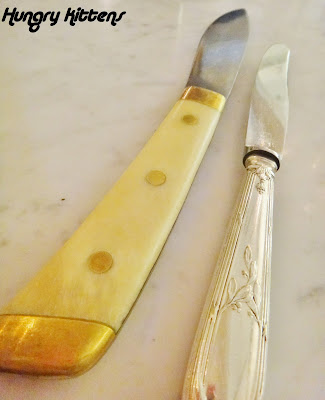 We arrived at Spring red-faced and starving. After I got my breath back, I had a moment to take in the restaurant. I really dig the decor. It makes me think of country homes and sunshine and cleanliness and lemons. The colour scheme revolves around the theme of 'white' and there's an abundance of bleached wood, which I adore. It's quite strange having dinner late at night in an environment that's speaks so strongly of day time. I don't say that critically. I genuinely like that. Dark and romantic is OK for some but I'm a fan of the light.

I really couldn't decide whether we should go for the shared lamb or separate mains so I delegated the task of ordering to Marc and settled for wine consumption instead.

To quieten our grumbling bellies, we ordered bread to start with. Our entree arrived at the same time, which is unusual timing but it worked out for us because we were so hungry. 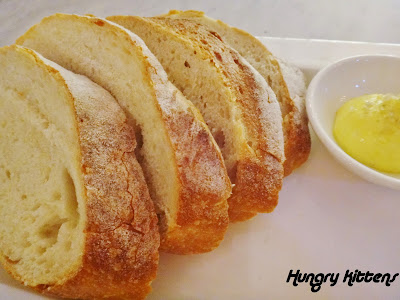 The bread was a dense, white country-style loaf, served warm with butter. It's refreshing to see bread at a restaurant that ISN'T sourdough. The butter was delicious. These days, I'm getting a bit snobbish with my butter and whilst I'm far from being a professional butter coinosseur, I find the French make excellent butter and that's what I use at home. This one at Spring reminded me of that. I'm discovering a correlation between the yellowness of butter and how good it tastes. 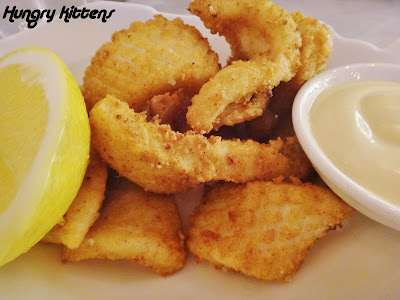 Calamari fritti - with lemon and aioli

The calamari was a surprise for me. Crumbed calamari is one of those popular dishes that I like but never order. The biggest problem to me is a soggy crust, but calamari can also be fishy-tasting or tough or undercooked. It's a simple dish that's hard to get bang on. This one was extremely tender with a light crumb; much better than I was expecting. It was served with a garlic aioli that I steered clear from because I hate garlic but Marc said it was good. 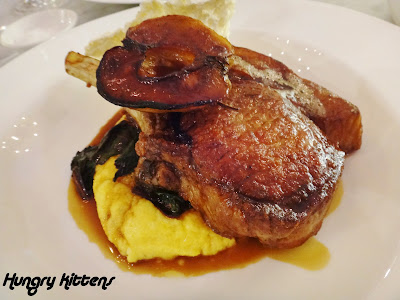 For our mains, we ended up going for the pork cutlet and the quail risotto, which was one of the specials of the day. 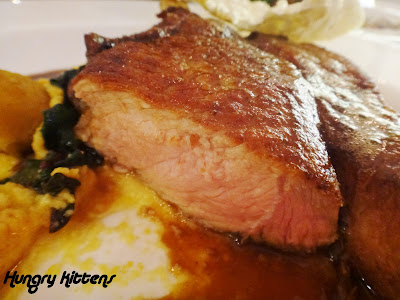 Inside shot of pork cutlet

The pork cutlet was massive and cooked through, but a bit tough for my liking. It was served on a bed of what I thought was polenta but Marc said tasted eggy so I'm not sure. The caramelized apple was a punch of dessertiness that sort of went with the pork but just too sweet. 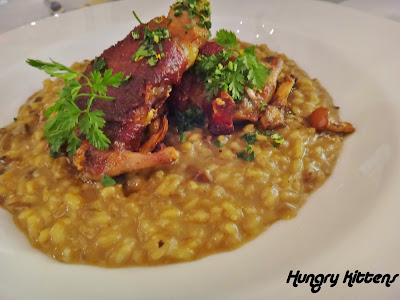 Risotto of quail - with sage, proscuitto and chanterelles

My preferred main was the quail risotto. I wasn't a huge fan of the quail meat. It was firm and salty, reminding me of Chinese salted duck, which I love but I just felt was out of place. The risotto itself was delicious. That's twice now that a restaurant risotto has impressed me in as many visit. Maybe I should revise my opinion on restaurant risottos! They're not always gluey and gross. They can be flavorsome and cooked well. This wasn't as spectacular as the mushroom risotto at Anise but it was comforting and tasty all the same (and it also had mushroom; that's what the chanterelles are, in case you didn't know). 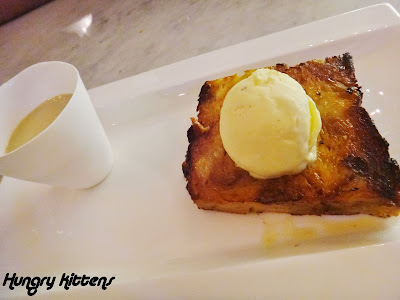 We were deliriously full at this point but I had my eye on one of the dessert specials and I couldn't let it go. The dessert special was a caramelized bread pudding with ice-cream and a coffee anglaise. It's a dessert that sounds irresistable, looks plain and tastes like a heart-warming hug. 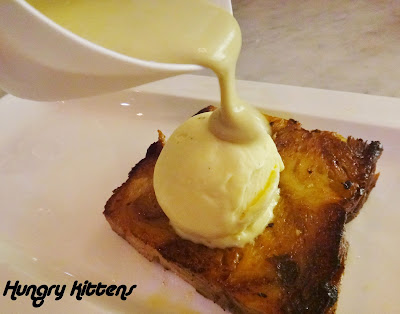 It's easy to be visually disappointed by the what appears to be a slab of toast on the plate. Appearances can be deceptive. It's a creamy bread pudding with a crunchy caramel crust. The ice-cream and coffee anglaise are perfect accompaniments and this dessert seeemed like a love child between bread and butter pudding and an affogato. This was the ideal ending to a great meal.

I really liked Spring Restaurant, which is a shame because as someone who doesn't live in Brisbane, Saturday nights are my main dining night and they aren't open then. The whole restaurant radiated homeliness and comfort, both with the decor and the style of food. I thought the service was smashing. We were the last 2 diners in the restaurant and I can understand how frustrating that must be from a restaurant point of view when all the staff wans to go home. The guys at Spring were wonderfully accomodating and didn't make us feel like we were being rushed out at all.