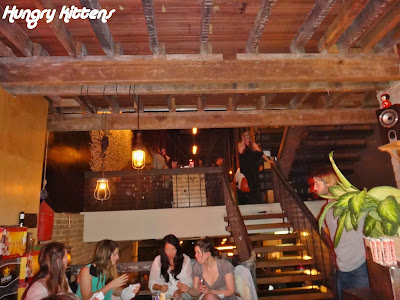 I'm getting to that point between holidays where everyday life is tedious and the days I have to tear myself out of bed dreading work are frequent (or constant).  My next overseas trip is so far in the distant future that there isn't even the foetus of a plan in place. The process is still at the fallopian tube stage of development where I'm Googling European country locations to assess geographical proximity and learn which capital cities belong where. For someone who didn't know Spain was part of Europe or what 'exactly' the UK was, that's a critical early step in holiday conception. 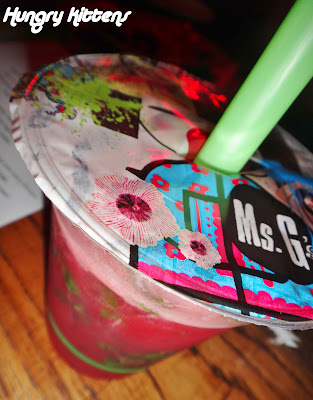 Reproductive analogies aside, I chose to survive my next 'x' months of staying in Australia by taking advantage of how relatively easy it is to escape to neighbouring cities. Marc and I planted a weekend away in Sydney a while back and it's served as my thing-to-look-forward-to in recent weeks. We chose Sydney because it's so close to Brisbane (I still marvel at how it takes me longer to get from Toowoomba to Brisbane than it is to fly from Brisbane to Sydney) and because we have friends there to visit. 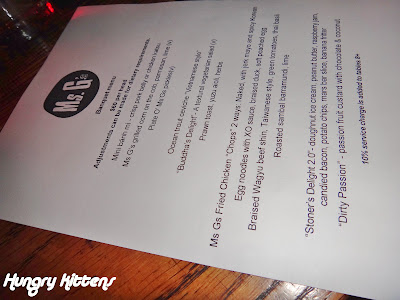 Marc had a reunion planned for Friday night with ex colleagues from his time working in Sydney. Sarah, a local foodie expert, chose Ms. G's, which I was thrilled about because I'd been DYING to go since I first heard about it. Marc mentioned we were going there once, then never again, and I was too scared to ask for clarification in case I'd remembered wrong and would feel epically disappointed.

We were supposed to arrive in Sydney late afternoon, check-in to the hotel and get ready at a leisurely pace before dinner around 9pm ish. Thanks to a significant flight upset and ensuing airport drama, we arrived 3 hours behind schedule. Marc spent the flight tapping his fingers, feet, everything. I spent the flight stressing about whether or not I'd have enough time to wash my hair.

We landed. We ran out of the airport. We jumped into a cab. And we checked into the hotel. Forget 'leisurely pace', I don't think I've ever washed my hair that fast in my entire life. And then bang, we were ready and off on our way to Potts Point.

Sarah had miraculously managed to delay the kitchen by an hour, so even though we were late, the food was only just starting to get served. Great effort! We were extremely appreciative.

Ms. G's appears smallish but it's got multiple split levels so I'm not sure what the seating capacity is. It feels like a cross between a bar and a restaurant, which I suppose makes sense since that's what it is. The lighting is dim and the decor is trendy. We were seated below a ceiling lined with jars full of strange objects. The rumor is that you can request for things to be put into the jars but we didn't test this out. 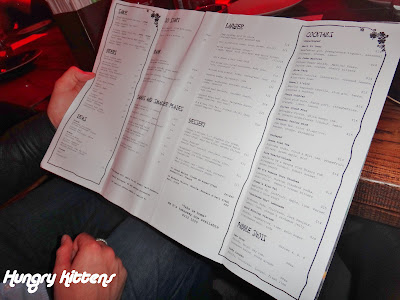 I needed to get on the drink to destress so I started working through the cocktail menu. I won't go into any cocktail in detail because by the end of the night I'd practically smashed through the entire list and that tends to blur specific impressions. The cocktails are categoried as 'packaged' or 'unpackaged'. Packaged means it comes in a bubble tea container and you pop a straw through the top. Unpackaged means it's served in a normal glass. Beach Boys recommended me the aloe vera which was like alcoholic grape zappo in liquid form. Yummo! My favorite was probably the pina colada but honestly they were all quite good.

Our table had gone with the banquet set menu (with the exception of Greens, who doesn't eat vegetables and ordered separately). The feast started with the appetizers. 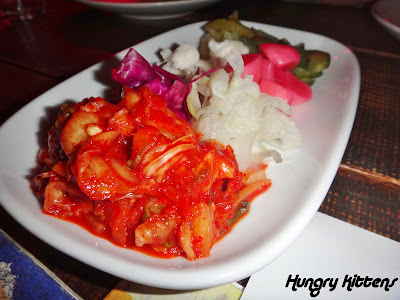 The first plate I saw was of Ms. G's pickles. It comprised of some kim chi and other pickled cabbage and gherkins. Nothing special here; just some meal accompaniments. 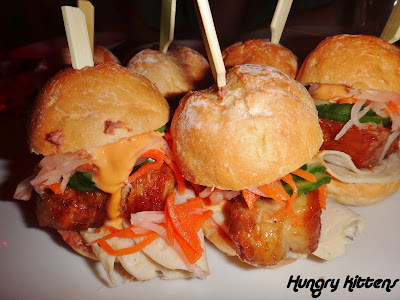 The mini banh mi were not only ADORABLE but also delicious. Banh mi are vietnamese rolls, served with pork or chicken (in various forms e.g. BBQ or meatballs or shredded), veggies and lots of condiments. I tried the pork belly mini banh mi and it was so yummy. I'm not sure how closely it ressembles the traditional versions but I don't care. They were small but packed a flavor punch and the pork was tender and gelatinous. 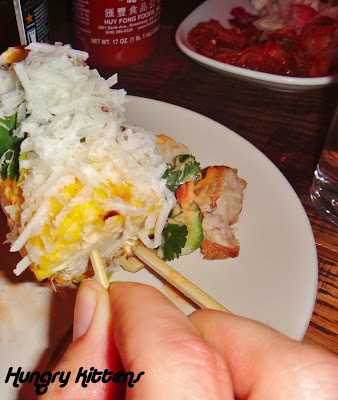 Ms. G's grilled corn on the cob - with parmesan and lime

I couldn't try any of the grilled corn because corn gets stuck in anyone's teeth on a good day. Add braces to the equation and it's a social nightmare. I heard a lot of positive feedback about it though. Marc commented that it was deceptively spicy for something so yellow. Smiles was a HUGE fan of the corn and polished off a couple of cobs with glee. 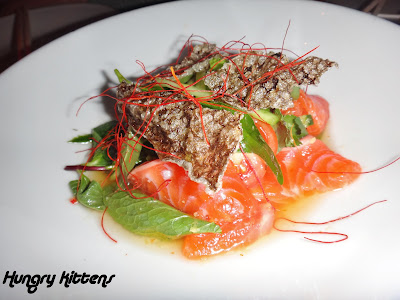 We progressed to the entrees. The first of these was the ocean trout ceviche. I found this to be a very sophisticated dish, one I wouldn't have expected based on the bar-like environment and previous dishes. The trout was fresh and tender and worked well with those typical Vietnamese flavors of lime and fish sauce. It had a nice crispy skin too. 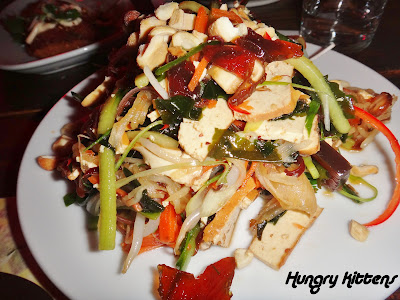 Next came the Buddha's delight, a vegetarian dish ressembling a hot tofu salad. As a joke Marc brought a plate of it over to Greens but she didn't take up on it. As I was writing this post, I asked Marc what he thought of this dish but it turns out he didn't eat it either! I do recall asking Beach Boys and they said it was good. 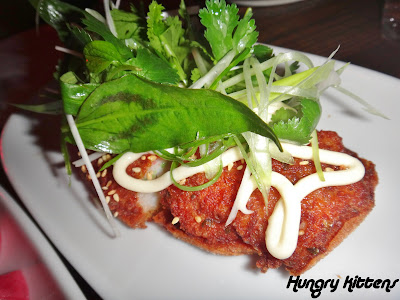 I was VERY CLOSE to not trying the prawn toast, again fearing it would be too difficult for me to eat (I must say this in almost every review but orthodontics do NOT compliment my interest in dining). Beach Boys insisted I try some and I'm so glad I did. You know how awesome prawn toast is normally? Even when you know it's made from processed prawn powder on stale bread? Well this was prawn toast made with real, whole prawns and it was bloody fantastic. 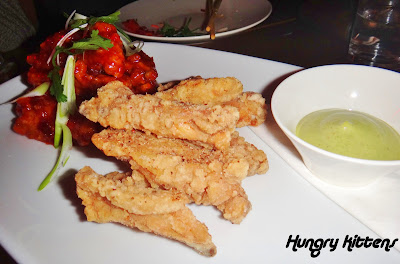 We had already gone through so many dishes and there were still plenty to come. The fried chicken chops served as the first of the mains. They came 'naked' i.e. plain battered, or coated with a spicy, Korean-style sauce. I tried a bit of the plain one with the jerk mayo (I just Googled what 'jerk mayo' is and there seems to be no obvious definition so if anyone can enlighten me, please do). The chicken was crispy and juicy (with a surprise piece of bone inside; watch out for those) and the jerk mayo, whatever it may be, was spicy, zesty and creamy all at once. I am a fan. 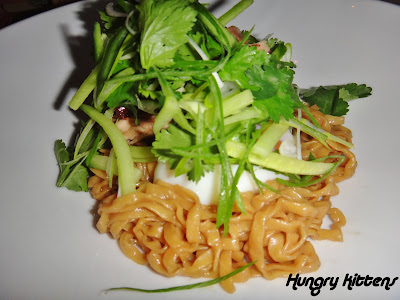 The egg noodles served as a non-boring carbohydrate to fill up any hungry folk. It came with braised duck and a soft poached egg in XO sauce and the idea is to mix it all up before eating. 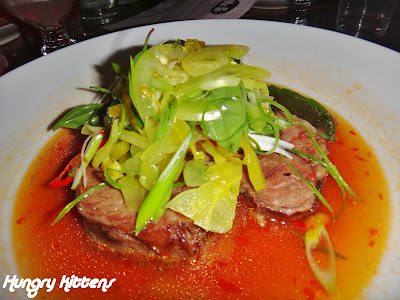 The braised wagyu beef shin was amazingly soft. I asked Marc for his comments because I remember he liked it; but it seems he himself can't remember that he liked it. His forced feedback was "it was juicy and tender and good enough for me to not let you not try it". If you can work through those double negatives, cudos to you. 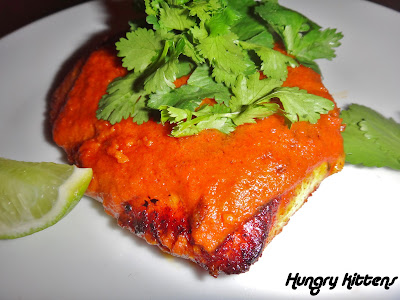 Our final main was the barramundi in sambal sauce. Neither Marc or I recall eating this dish but he pointed out accurately that his banker friends demolished the plates speedily. So it must've been good. 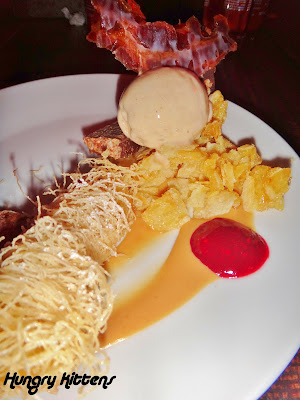 The guys at our table were really excited about the dessert offerings. With a name like 'Stoner's delight', how can you go wrong? I find it hilarious that we descended (or ascended; depending on your perspective) from 'Buddha's delight' earlier on in the meal to 'Stoner's delight'. When it comes to donut ice-cream with peanut butter and mars bars on a plate versus tofu salad, I know which I'd prefer. My favorite part was the banana fritter, wrapped in what I think is kataifi pastry. 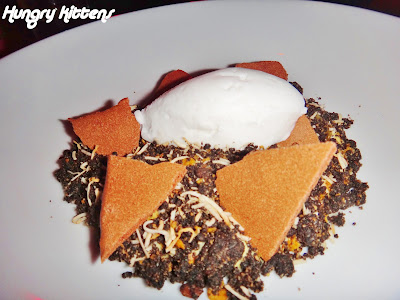 The other dessert was predominantly passionfruit-flavored so I steered clear of that. I'm not huge on passionfruit. I heard a lot of comments that this was 'very passionfruity', which didn't appeal to me but might to some.

My high expectation of Ms. G's was met with aplomb. Marc and I were just discussing that it was mostly a social occasion so we were barely focusing on the food but it still managed to make an impression. My favorites included the prawn toast, wagyu beef and mini banh mi. Oh and the cocktail selection was grand too. I am impressed with how friendly the staff were and grateful that the kitchen delayed service for us. It's one of those restaurants that I'd break my no-repeat rule for and coming from me, that's high praise indeed.

As a teaser to regular readers, one of Marc's friends, Harry (nicknamed after the media executive from Mad Men due to an uncanny ressemblance) challenged me to incorporate a certain word in this post. If you read anything that sounded abruptly out of place, that's the reason... and not me going crazy or having bad Asian lady english (although that may be true too).