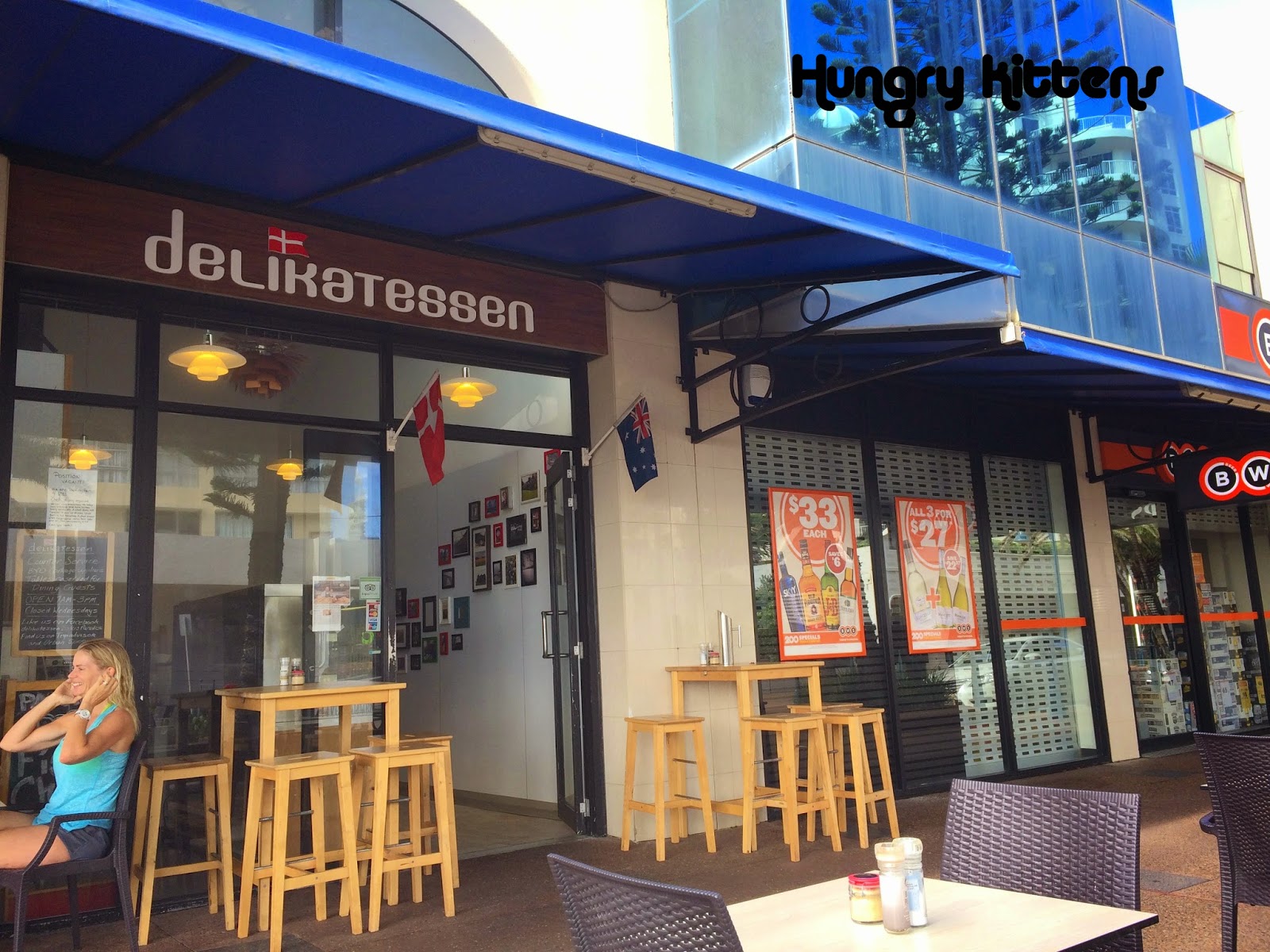 It's a sign that I'm running behind on blog posts when there are things I haven't written about that I experienced nearly a month ago. Jenny and I visited the Gold Coast for a weekend for a friend's hens celebration. The next morning, we were hung over and hungry and craving something hearty yet nourishing for breakfast.


A quick search of Urbanspoon allowed me to create a short list, of which Delikatassen was chosen because it was a pleasantly moderate beachside stroll away. The cafe is smallish and we ordered inside before taking a table on the street. Interestingly, the menu options are not only available in written form but also modeled on display so you can accurately see what you're going to get. Most of the options are European-style breakfast platters and Jenny and I chose a platter each. 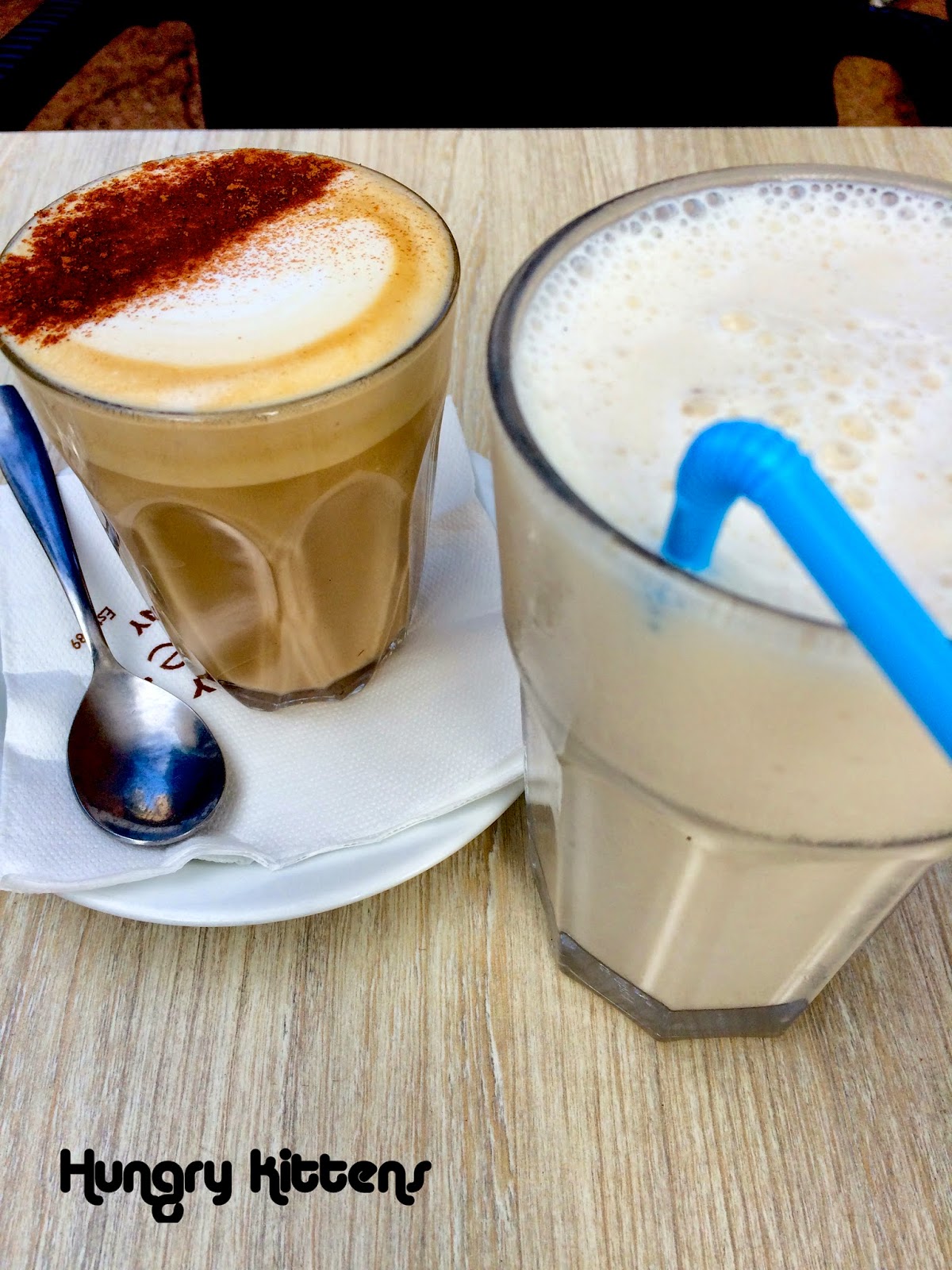 Our drinks arrived first. Mine was a banana smoothie. It was a perfect thickness, without being too milky or gluggy. I liked that it was not overly sweet and had a real banana flavour. I can't stand imitation syrups in milkshakes and smoothies.

Jenny's pick of breakfast beverage was the dirty chai. Neither of us had heard of this before and it was described as a coffee with chai spice flavours. I tried a bit and thought it was really nice, kind of like a chai latte but with more of an espresso kick. 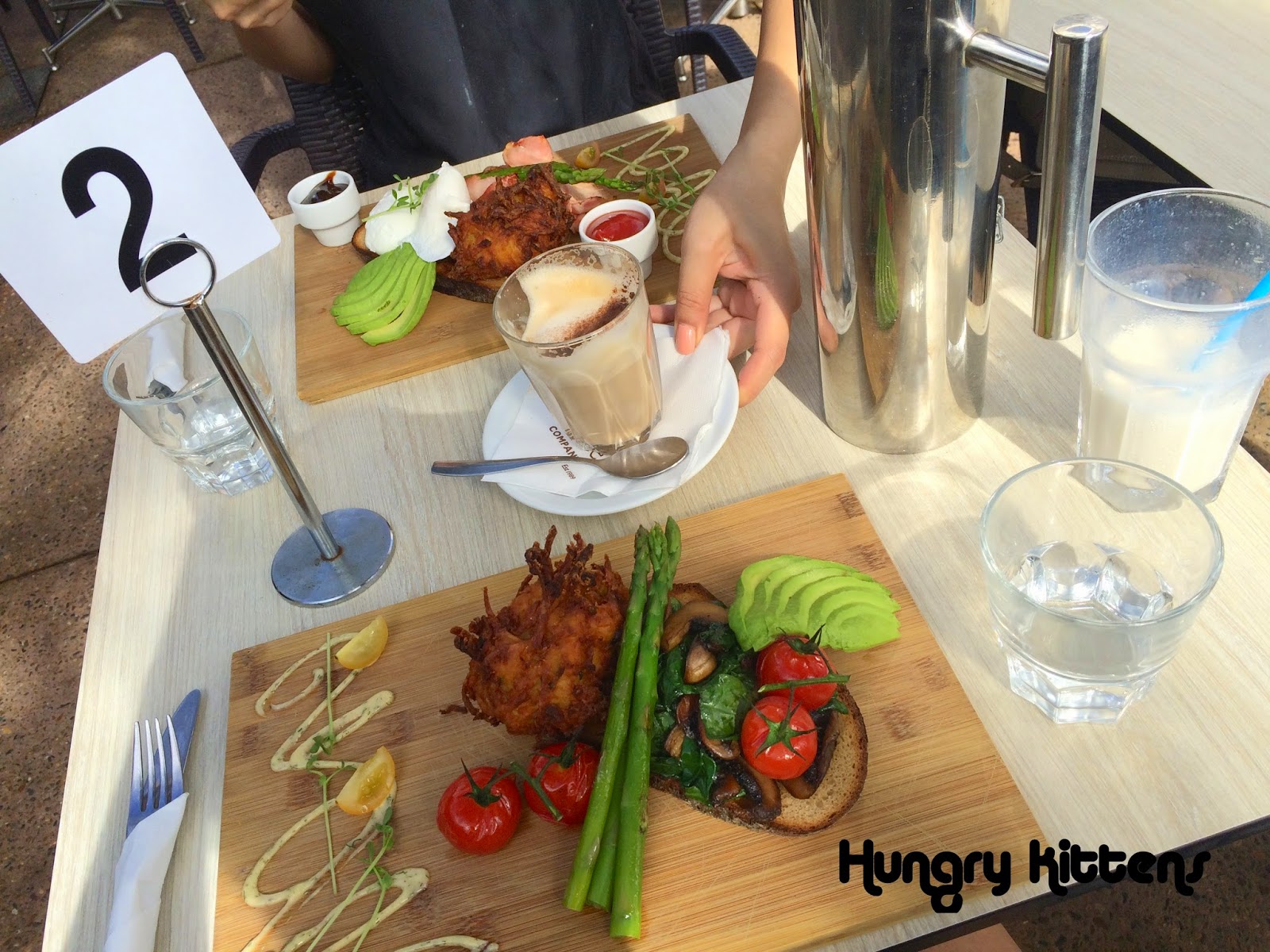 The food arrived not long after. I like anything that's presented in platter form just because it looks more feastly. 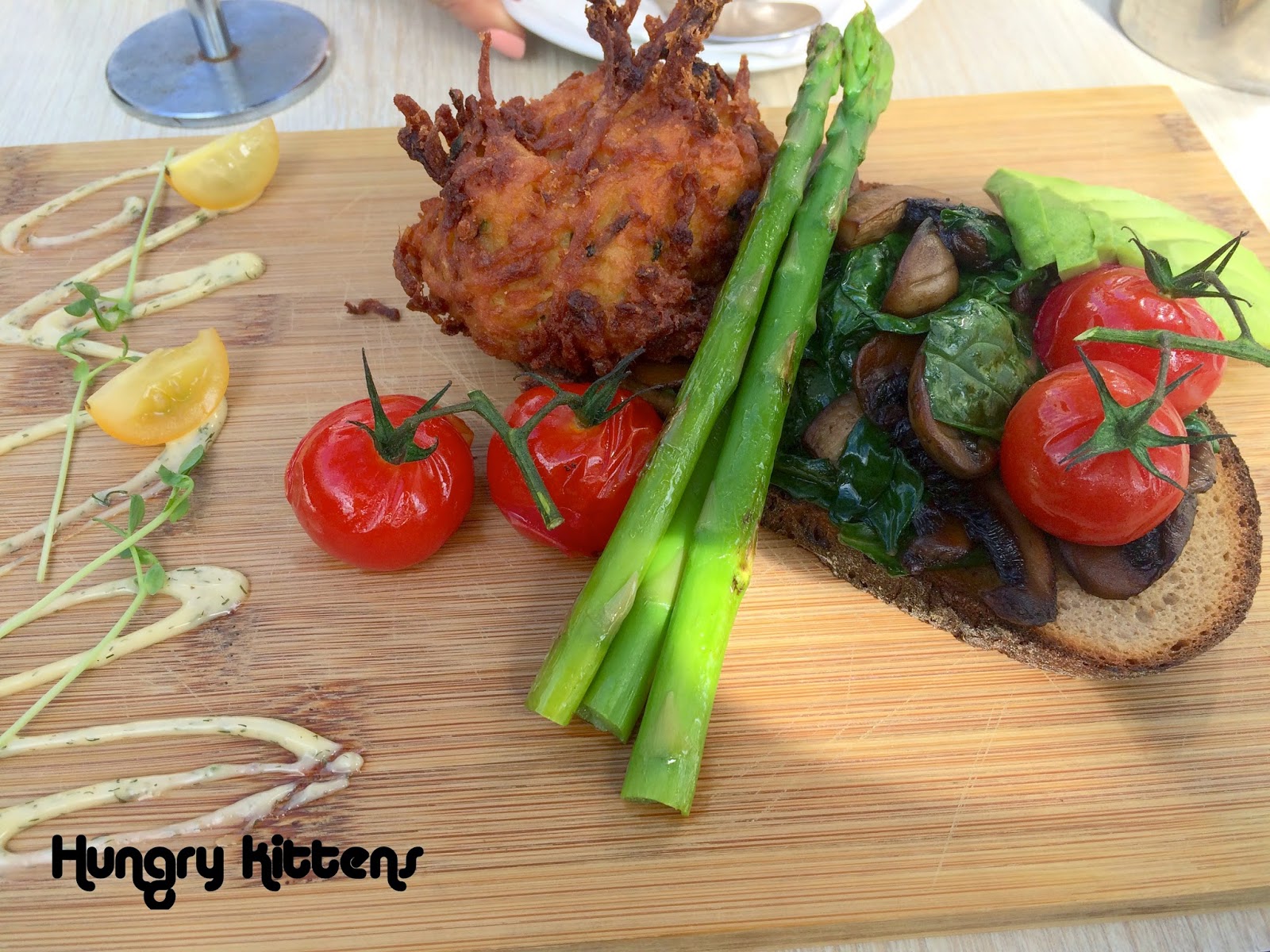 Many components of our platters overlapped so I won't repeat myself. Mine was the vegetarian option and featured sauteed spinach and mushrooms in place of Jenny's bacon. I was given the option of adding egg but chose not. The asparagus was qrilled and tender. The rye was thick and filling. A special mention must be given to the avocado because it was perfectly ripe and creamy without even a hint of brown. How is that even possible? The rostis that were present on both our platters were crunchy but a bit too oily for me. I still finished mine though. One does not simply leave fried potato behind. 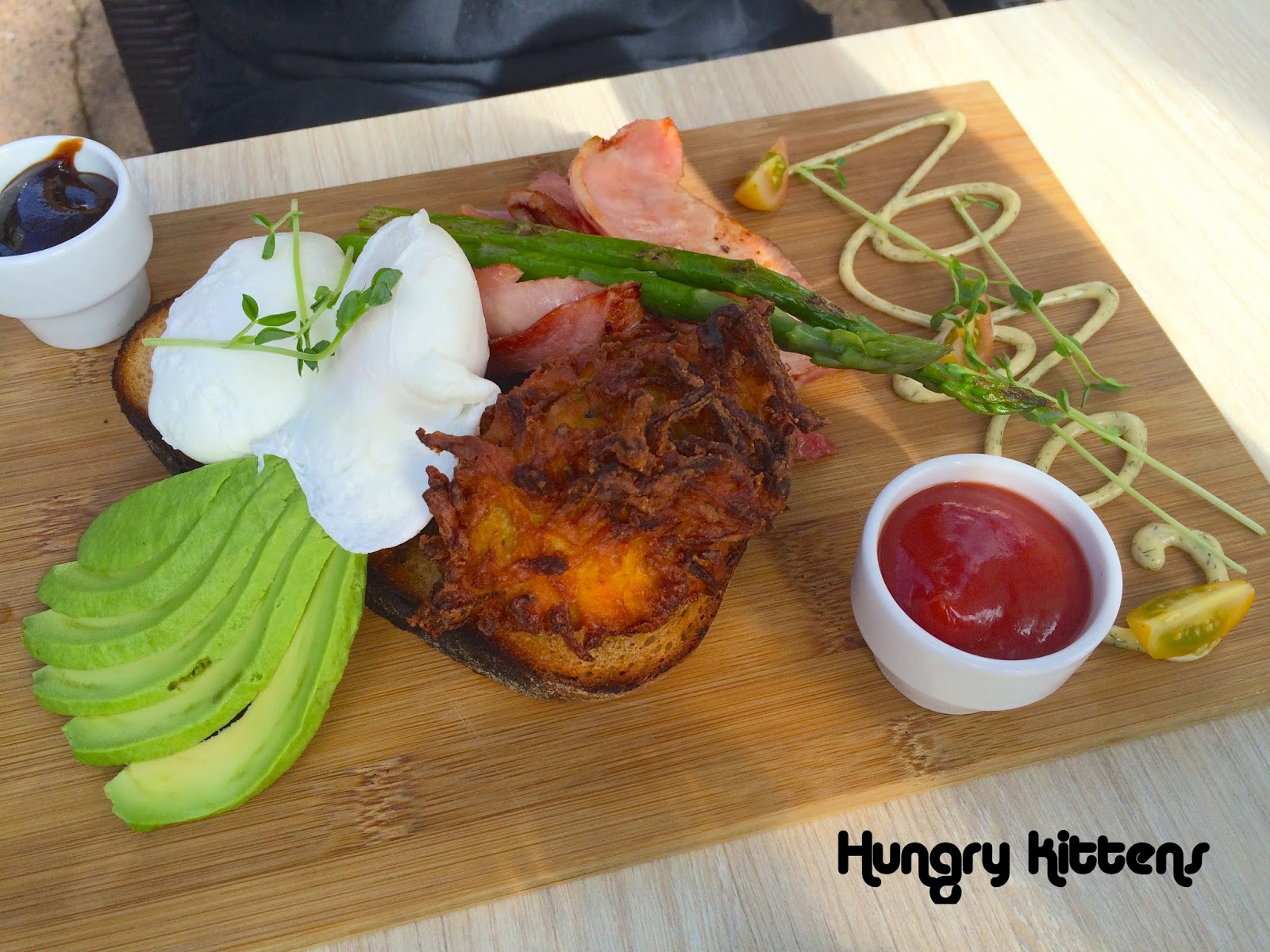 Jenny's platter did come with eggs, which she opted for 'hard poached' (I didn't even know that was a thing!) Delikatessen managed to get it just right, however, with Jenny proclaiming that these were perfectly cooked eggs. Her platter also came with a lot more sauces than mine.

We experienced fresh and simple breakfast fare from Delikatessen that was inexpensive and very satisfying. The service was very friendly too, which is not always the case at popular cafes in Surfer's Paradise.