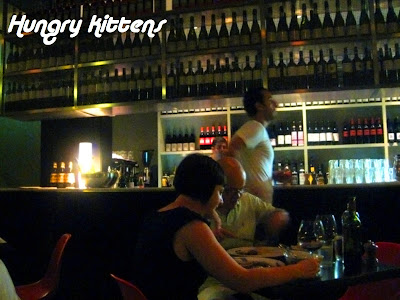 It's not unusual for me to make up semi-ridiculous excuses for going out for dinner. For this reason, Charlie and I are still celebrating an 'anniversary' every month. Yesterday marked 10 months and due to some strange coincidence, also the 1 year anniversary of our first date together.

This first date actually involved a dinner at Joseph Alexanders. Ideally, we would have returned there - making it soppy, cheesy and appropriate. Unfortunately, they don't open on Sundays so we were left to hunt for other restaurants.

My birthday party happened this weekend and one of the presents I got was 'Nigella Bites' by Nigella Lawson. I love her books even for bedtime reading and when I was leafing through the pages, I came across this divine chili linguine recipe. This gave me an intense pasta craving and consequently, I found myself scouring online resources for good Italian restaurants in Brisbane.

After a brief debate between budget or top reviewed restaurant, Charlie and I chose Beccofino. It has rave reviews from Vogue Forums and magazines (such as Gourmet Traveler and The New York Times). I was curious about the hype.

Beccofino has a 'no booking' policy which is fine with me. We drove there at around 7pm on the Sunday and got a seat immediately. Soon enough, the place got busier but not crowded. 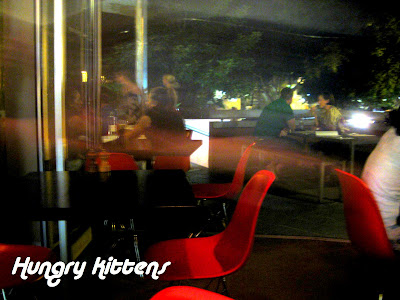 The first thing I noticed was how dim the lights are. I have a thing against dim lighting in restaurants. Even in the most romantic of settings, I find it annoying to the extent that it hurts my eyes. Charlie is probably not as fragile as me but he pointed out that the modern decor of Beccofino would have been brought out better with brighter lighting.

When reading reviews online, I came across comments about the service efficiency. True to what I read, the staff at Beccofino are fiendishly efficient. At first, I wasn't used to everyone swirling around the tables in a constant rush. I'm guessing it's more common in bigger cities to have bustling waiters and a bossy floor manager openly directing staff to where they should go. Here in Brisbane, I have never seen anything like it but I recognize this scene from TV shows.

The menu is quite simple but every dish sounds delicious. Even though I had read the menu online in advance, I still took some time to decide what to order. We both felt like pasta but the pizza at Beccofino is famous so I knew we had to try that too. The compromise was: 1 pizza, 1 pasta and 1 salad to share.

During the wait, I noticed a waiter slicing bread in the corner... non-stop. Being in the hungry state that I was, I was convinced that this was complimentary bread and we would get a plate of it straight up. No such luck :).

Thankfully, our food didn't take too long to come out and we tucked in ravenously. 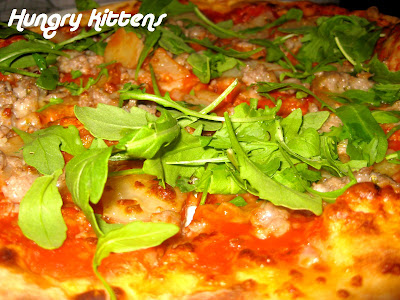 The pork and fennel sausage pizza was quite large and it is cut into generous slices. We grabbed a slice each and bit in straight away. The flavors were absolutely genius. I've had fennel in dishes before and in fact even cooked with it but I never really appreciated how the unique flavor works in compliment with other foods. This pizza really utilizes the licorice quality of the fennel but in an understated manner that allows the pork to remain as focus. The base was crisp and fabulous. I've had a few decent pizzas in my time but this was impressive. 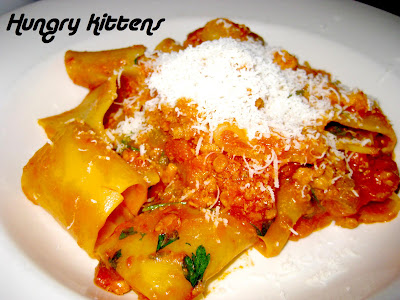 I intended the rigatoni to be for Charlie alone but it was quite a test of will power not to devour the whole thing to myself. As soon as I tasted a piece of the pasta with the lovely veal and pork ragu, I said "this is the kind of pasta I want to be able to make at home". I LOVED the 'bite' of the pasta. It was thick, rustic and homely with just the right amount of chewiness. The sauce was simple but very moreish and made me convinced that I could never ever go back to supermarket pasta sauce. The serving was a bit on the small size but the taste was definitely A+. 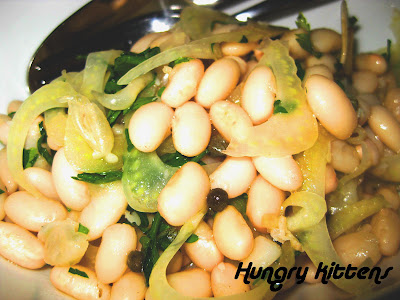 When I chose the canellini bean salad, it was a toss up between that or a second plate of pasta. In favor of my healthy-eating diet, I chose the salad. This one wasn't very well-received by Charlie. He didn't like the mix of capers and parsley together. Whilst I wasn't the hugest fan of this dish (perhaps because the other 2 were so mind-blowing), I found myself picking at it. It sure was a healthy choice and different to your bog-standard garden salad. The beans and shaved fennel were an interesting combination. The salad was oil-free and light on the palate.

Beccofino produced fabulous food at affordable prices. I would prefer to go there for lunch when the dim lighting isn't a prevalence. Aside from those slight annoyances, it is a restaurant to highly recommend.