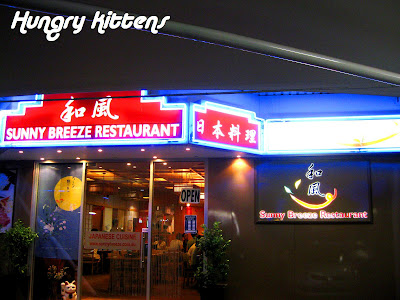 Before it was Sunny Breeze, this was the location of a Japanese restaurant that I always wanted to try (even though I honestly didn't think it would be exceptional). That place has disappeared and in its place, Sunny Breeze. Without really knowing what Sunny Breeze had on offer, I felt interested in the restaurant. Something about the decor, signage and color-scheme spells out 'nice, cheap Asian food'.

Last night, I wanted to go to Market Square for dinner but parking was abysmal so I decided to give Sunny Breeze a go.

It just so happens that on Sundays, they have an all-you-can-eat sukiyaki or hotpot thing going on. On Wednesday, it's all-you-can-eat sushi. Charlie and I were both in the mood for hotpot and one of our 'couple songs' is Sukiyaki so it seemed like a great idea. 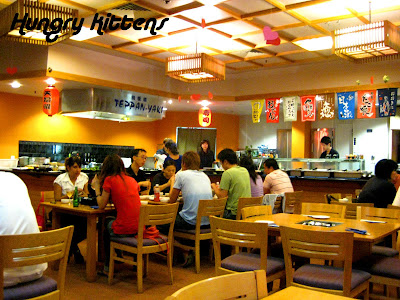 We were seated (with slight inefficiency) and told that we could get started straight away. For your information, choosing between the sukiyaki or hotpot option really just relates to the soup base. Sukiyaki is a sweet and salty soy-based soup whereas the hotpot is a clear, natural soup.

At first glance, I was a bit disappointed at the selection of hotpot ingredients purely because the variety was nothing like what I've had in Shanghai. I know it's an unfair comparison though... 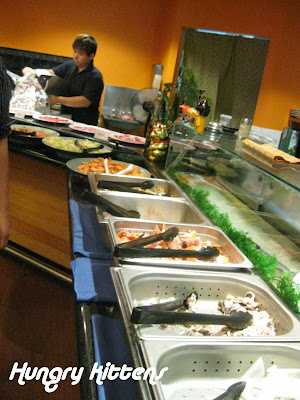 There range includes: chicken, fish, octopus, squid, assorted fish balls, meat balls etc. The sliced meat options are beef and pork. I'm used to having lamb in Chinese hotpot so I was a bit dubious - however the beef and pork were both very tender and beef particularly suited the sweetness of the sukiyaki soup base (I believe sukiyaki means 'beef stew' in Japanese anyway).

Other hotpot additions include wom bok, bok choi, vermicelli, shallot and onion. I highly recommend having onion in your sukiyaki - again, it's a great flavor match. 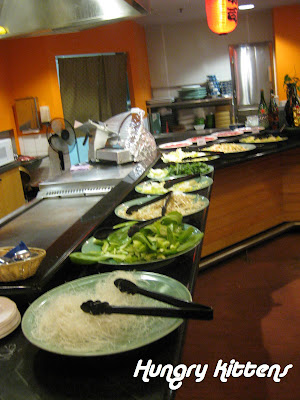 There are 2 cold salad options for you to much on the side. Rice and miso soup are also self-serve. 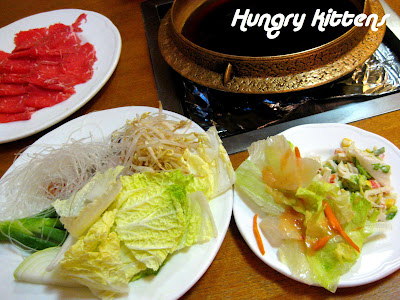 Before it all goes in the pot... 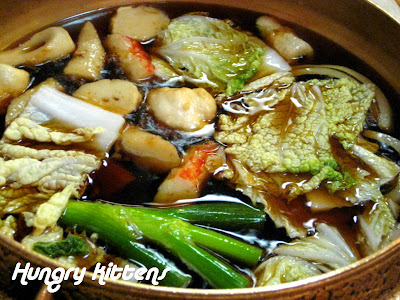 We took it easy and ate slowly to sample a bit of everything. Like I said earlier, the meat was great. I also liked the meatballs. 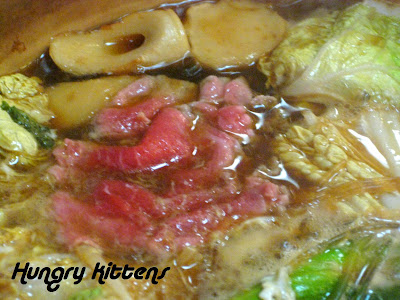 Waiters are easy to call over and quick to tend to your requests. We asked for soup to be topped up maybe 3 times - no problems.

I read another review online expressing frustration at how they were told to finish up before they were satisfied. This sort of happened to us to. About 2 hrs into the meal, a waitress told up they were ending the buffet soon so that we should get more food (if we wanted to) before they packed it up. Although we were finishing up around then, it felt awkward having dessert while they were cleaning up around us. I would have liked them to do it after all the guests have left. 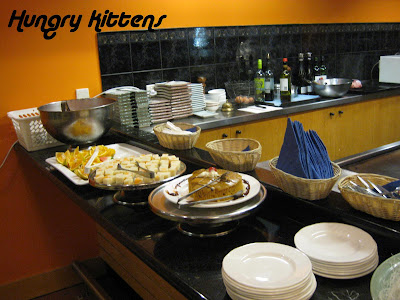 For dessert, the buffet options included mango pudding squares, sago and watermelon dessert, caramel mudcake (Charlie swears this is Woolworths mudcake, which he happens to like but I think seems tacky) and fruit.

Overall, I think the concept behind this restaurant is fabulous but it would take some tweaks for it to become perfect. Ideally, there would be more variety and a 'neater' buffet arrangement. Cuter dessert options would be good and I personally love sauce-stations where people can mix their own dipping sauce for hotpot. Finally, it's important for a buffet to feel prolonged and relaxed so I think Sunny Breeze should make a habit of not hurrying guests out or closing down the restaurant around still-eating guests.