Wendland Olives for Breakfast and Lunch 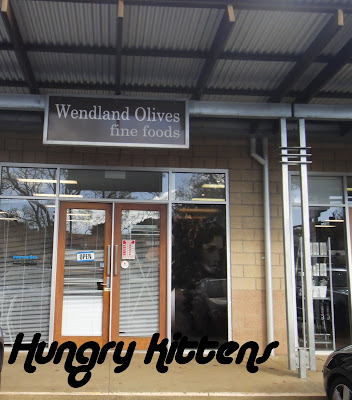 I remember when Mochi first told me about Wendland Olives. Man, that feels like a long time ago now. How fast has this year flown? Her sister had come up to Toowoomba for a visit so they'd been doing a whirlwind inspection of all of Toowoomba's touristy sites (you can count them on one hand). 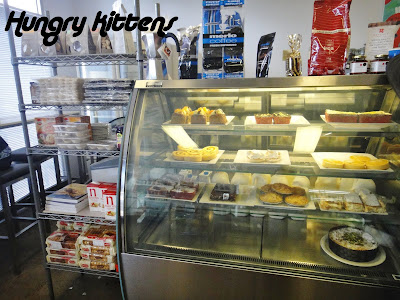 Mochi's exact words were that Wendland Olives 'was like a cafe in New Farm'. That, for someone who lives about 130km away from New Farm, and indeed any other suburb in Brisbane that houses fine cafes, was music to my ears.


I tried to go once on a Sunday with Byron but it was too crowded. He's not an 'eat breakfast out' person anyway so add the factor of having to wait and he can't turn away fast enough.

The solution? Turn to your much more reliable and patient girlfriends instead. Mochi vowed that she would take me and indeed she did.

We actually went on 2 occasions. Once for a quick pre-conference breakfast and once for lunch. I smooshed both outings together for this blog.

Wendland Olives is located in a complex on the corner of Bridge and Mary Streets. It is a small cafe and I think that's what gave us the impression of crowdedness on the first visit. 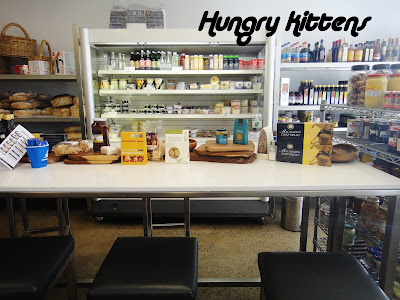 The cafe favors locals and regulars. By that I mean that a newcomer will step in and feel a bit confused. I know I did! There are no huge menus written on blackboards. When we went for lunch, none of the food on display had labels. On top of all that, the cafe doubles as a gourmet store and the boundaries between eatery and shop are very blurred (we sat at a long table that had stock placed as a centrepiece).

In term of food offerings, the breakfast menu is quite standard. You'll find your usual favorites on there but there's not much that makes you stop and think 'hmm?' To compensate for that, there's a decadent pastry cabinet and lots of gourmet bread available.

For lunch, there's a more 'fancy cafeteria' vibe because all the food we got was from the display counter. There were lots of salads, sandwiches, wraps and a few premade home-cooked dishes. 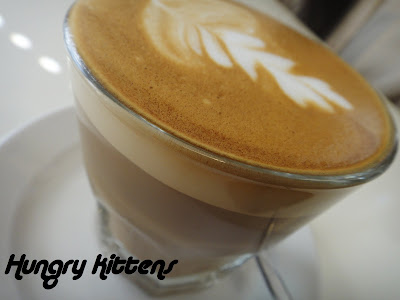 We had our coffees... a latte for me and cappucino for Mochi. 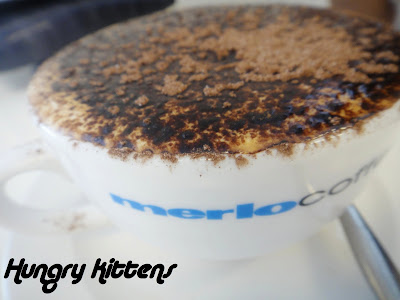 The coffee was a 'normal good' for me, which means nothing stand out but not at all bad. 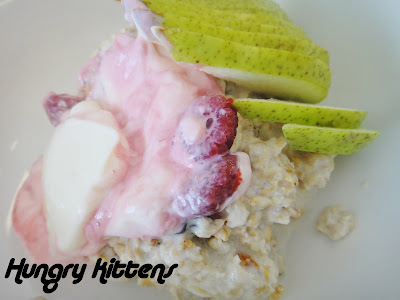 My breakfast pick was the bircher muesli. I used to be a bircher muesli buff, hadn't eaten it in ages and really missed it. This certainly curbed my cravings. It wasn't spectacular but it was good. I hate bircher muesli that's too sour. This one was light and creamy and the fruit was fresh. 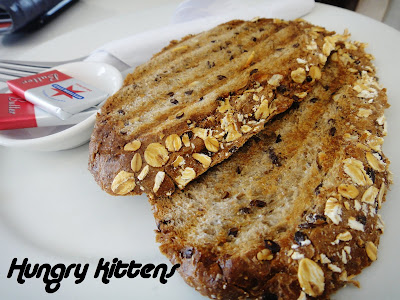 Mochi ordered the pumpkin gluten free toast, which I'd been eyeing off too. Neither of us are gluten intolerant, by the way, we just like pumpkin. The guy behind the counter (owner?) said they were out of the pumpkni variety but had other gluten free breads available, which defied the point of why Mochi wanted it so she went for their regular toast. 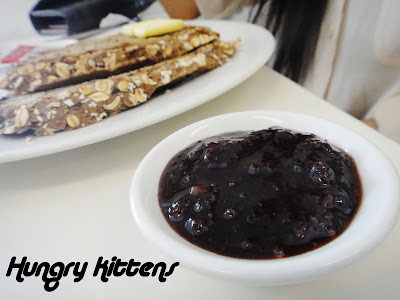 I can't remember what it was called but it was a fruity one, possibly with date. I looked at it and thought 'boring!' but when I had a taste, I was surprised at how good it was. It came with homemade jam that went nicely with the subtle fruit sweetness of the toast.

At that occasion, Mochi also bought a vanilla slice that looked AMAZING to take home. When we next visited, I wanted vanilla slice but they were out!

Speaking of this next visit, we returned for lunch not too much later.

We spent aaaaages asking the poor girls at the counter 'what's this?' and 'what's that?' because as I mentioned before, none of the food had labels. I don't know if that's a once off thing because they forgot or if the regular customers a) know what everything is or b) like surprises. 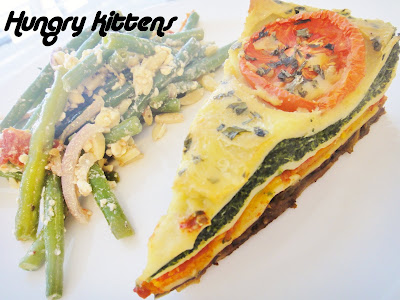 Mochi went for the vegetarian lasagna and a side salad. It was a beautiful creation with lots of layers and packed full of veggies. Vegetarian lasagnas take me back to my days of living in a share house in Stones Corner and when I tried to be vegetarian for a month. Ah, I'm getting nostalgic in this post. 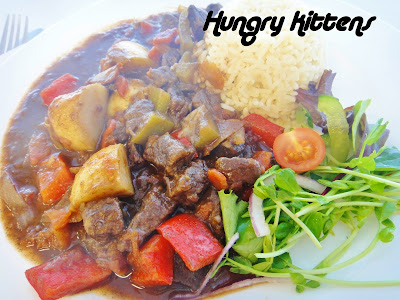 For my lunch, I went with the beef goulash on rice. It was nice but not as good as I thought it'd be. I like these types of dishes to be a bit richer and creamier. This had a nice flavor but wasn't creamy at all. It was one of those moments where I had to justify my pick with 'I bet this is healthy at least'. 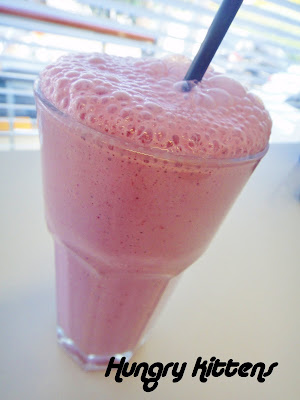 I just ordered another coffee as my 'beverage' but Mochi got a blueberry smoothie. I had a taste... it had a 'hint' of blueberry, a smidgeon of blueberry in fact. Mochi was being nice about it and said 'I like it. Very.... subtle'. Oh well, that's a valid opinion I guess. I know that when I go back, I'd more likely order a banana smoothie.

We couldn't say no to desserts. Is it sad that we need a second course to make our lunch feel complete? 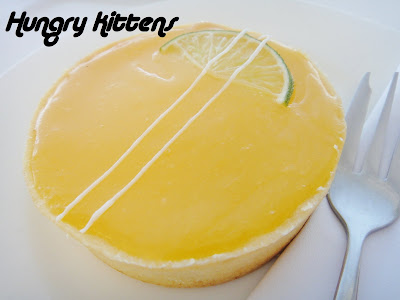 In absence of vanilla slice, I chose the lemon tart. It had a nice, sharp tang, offset by the creaminess of the pastry. 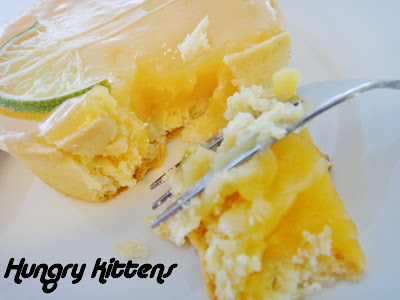 I did like this tart. I mean, it wasn't super creative (even I can make lemon tart) but it was simple and well-executed. 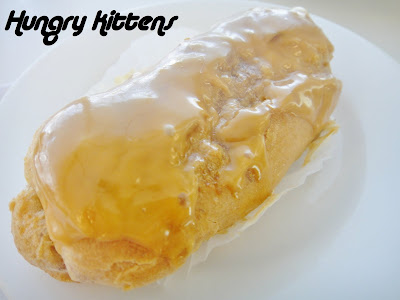 Mochi picked a coffee eclair after much consideration. It had a tiramisu-vibe because the filling was alcohol-infused. 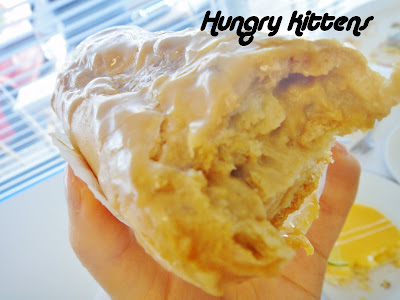 I really liked this and when Mochi decided she could eat no more, I greedily said 'aren't you having that?' and snatched up the remainder to munch on.

It should speak volumes that we liked Wendland Olives enough to return so quickly. It's the kind of place that invites you to make it your regular cafe because there's a nice variety of simple, good food. We also thought the service was lovely too. The counter guy (possibly owner) made us feel like we mattered as individuals and that's something that most New Farm cafes lack. I would like it to be a little big bigger with more seating areas just so it feels less competitive during peak hours.
Labels: Breakfast or Brunch, Cafe and Bistro Dining, Casual Dining, Dessert Out, Toowoomba