Melb in May 2 - Dinner at Claypots 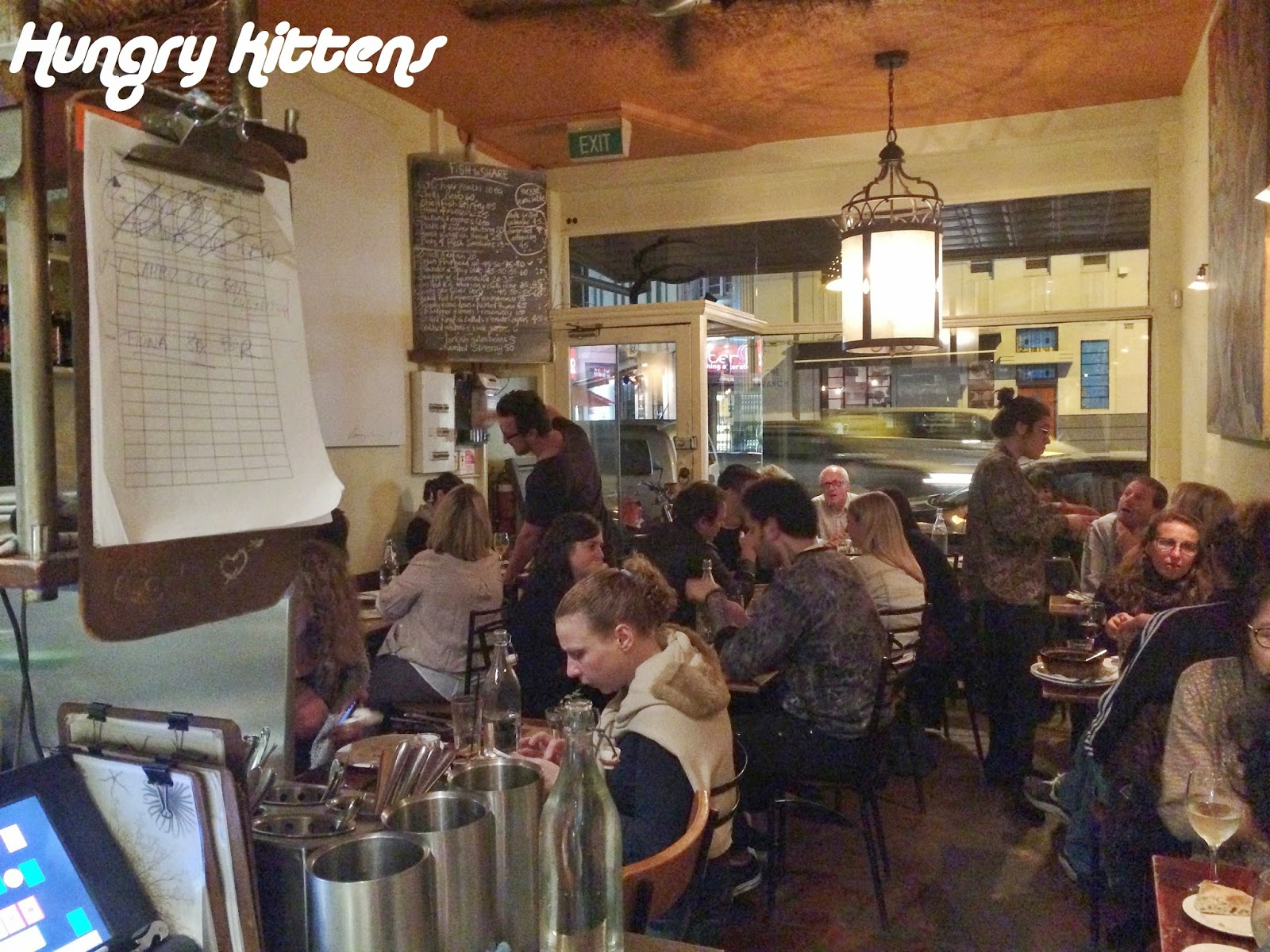 There is no one I trust more to give me a good restaurant recommendation than Mochi. Even though she hasn't lived in Brisbane for 2+ years now, I'll sometimes still take her word on where to go for breakfast or Asian cuisine. As my dining sista-from-anotha-mista, we have very similar taste and preferences in food. Whenever I visit Mochi's new home turf, Melbourne, I know that she'll have something good in store for us. 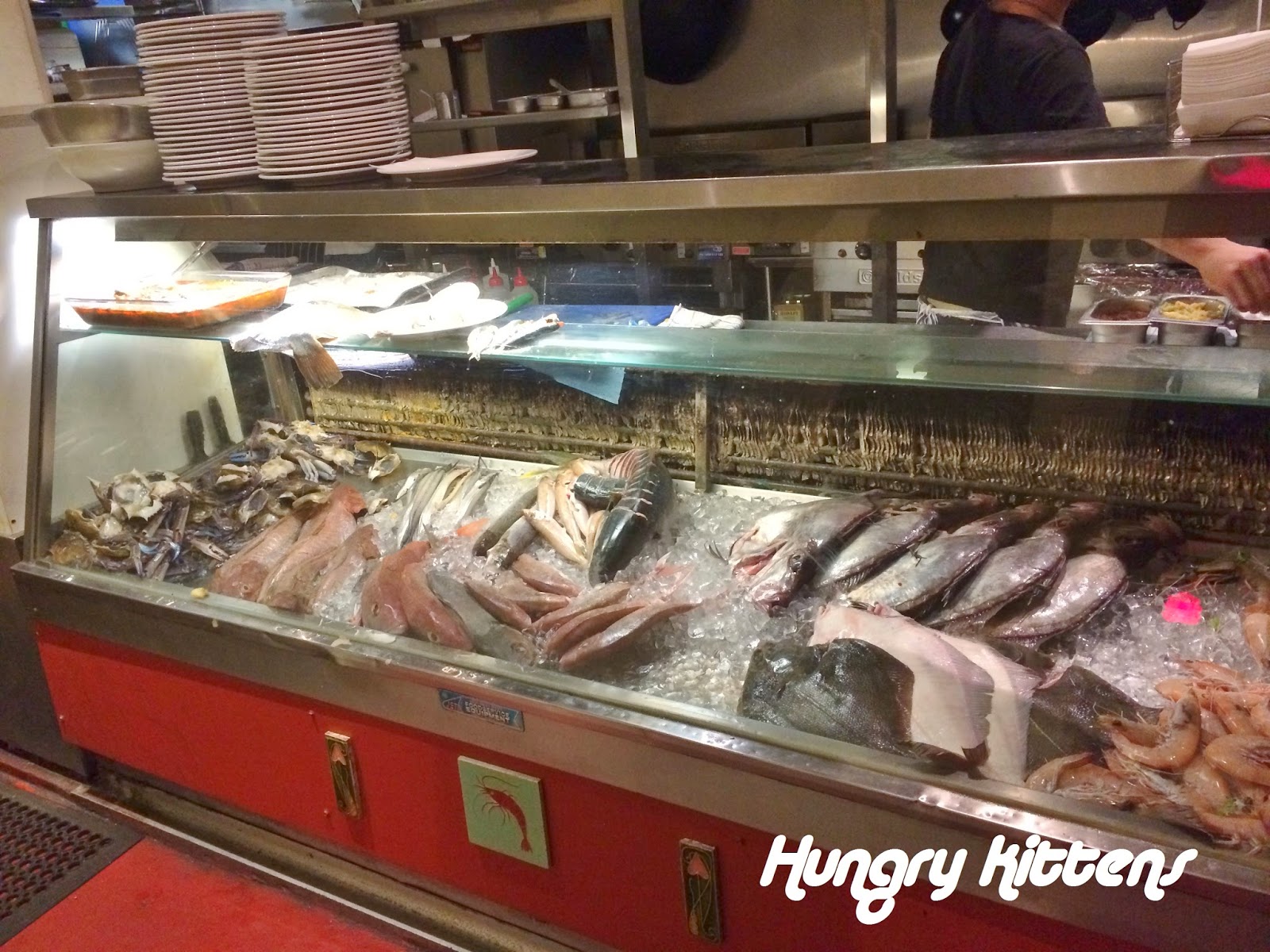 I act like a pure tourist when I leave Brisbane and as such, I've only stayed within Melbourne city. As far as I knew, the CBD WAS Melbourne and as built up and extensive as it is compared to Brisbane, I knew that it would have much more to offer. Mochi drove us out to St Kilda, an inner city suburb she described to us as the Melbourne equivalent of West End in Brisbane. The drive was longer than I expected, which highlights just how much geographically larger Melbourne city is than Brisbane city.


The parking gods were with us this evening and when Mochi happily quipped "this spot is right outside the restaurant!" I was delighted to learn that it was literally RIGHT outside the front door. This entrance was in itself a bit obscure. From what I could see, there were two parts of the venue, a bar and a restaurant, right next to each other and separated by a partition that you can cross through in places. We entered through the bar and then passed another door to get to the restaurant area. 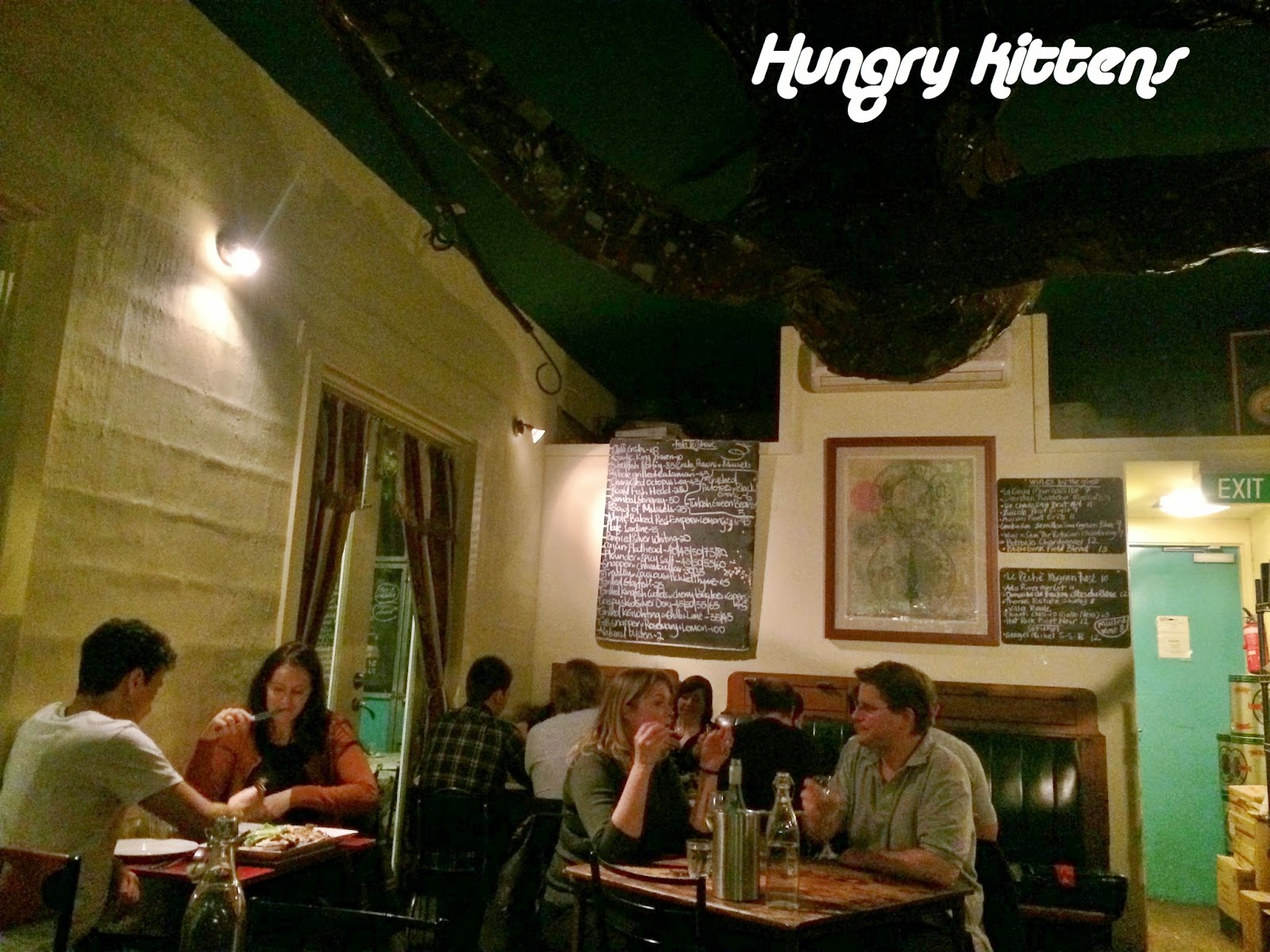 The restaurant is small and does not take bookings so we expected a wait. Luckily enough (after finally getting the attention of the waitstaff) there was a 4-seater perfect for us in the back portion of the dining space. Our table was right under the reaching grasp of a kraken ceiling installment. Ah Melbourne. Even in the most obscure way, it manages to be effortlessly quirky and cool. With it's tempermental weather, I never thought it was the city for me but it's definitely growing on me.

My favourite thing about dining with Mochi (and there are many) is that she is completely in control with the menu. Always. As with all great relationships there's a healthy harmony of personlities. In our case, I'm the one who never knows what to order and Mochi is a girl with a plan. The food options were listed on a chalkboard at the back of the restaurant (a bit tough for my poor eyes to read) and the fresh items of produce were on display at the front of the room. 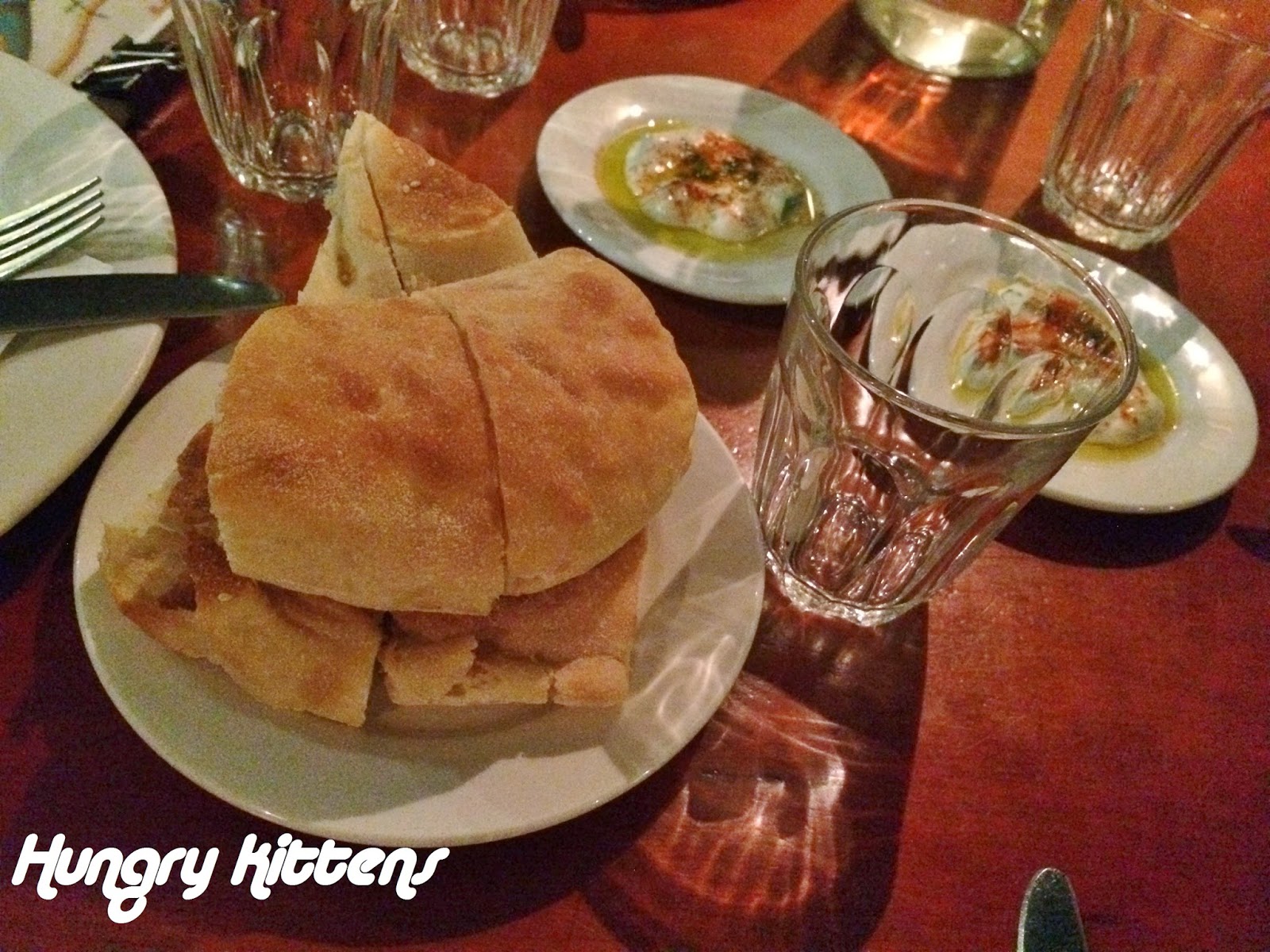 Before we had a chance to decipher what was what, we were brought out some complimentary breads and dip to start. I thought this was a lovely gesture because it gets everyone nibbling and sharing before the proper dishes arrive. Bread starters always take away the urgency of order because anyone who's starving will have a bit to line their bellies. 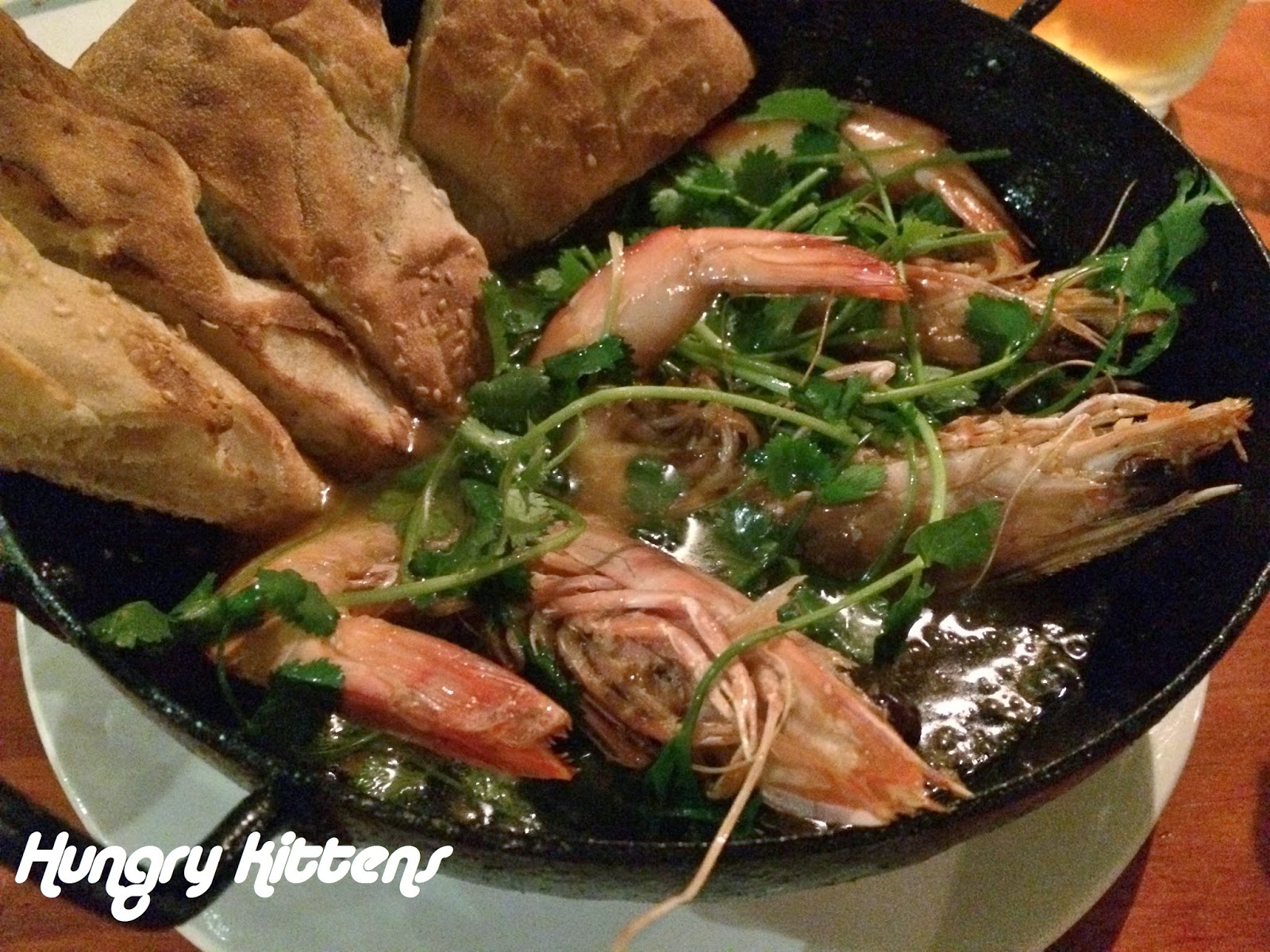 The menu at Claypots is designed for sharing. The term 'claypots' refers to the vessels used to flash fry the fresh seafood together with the delicious sauces on offer. I saw it used predominantly for shellfish (the mussels looked divine) but we had some prawns cooked this way. To say 'prawns' is a bit of an understatement. I think that baby lobster would be more accurate. These were some massive prawns!! 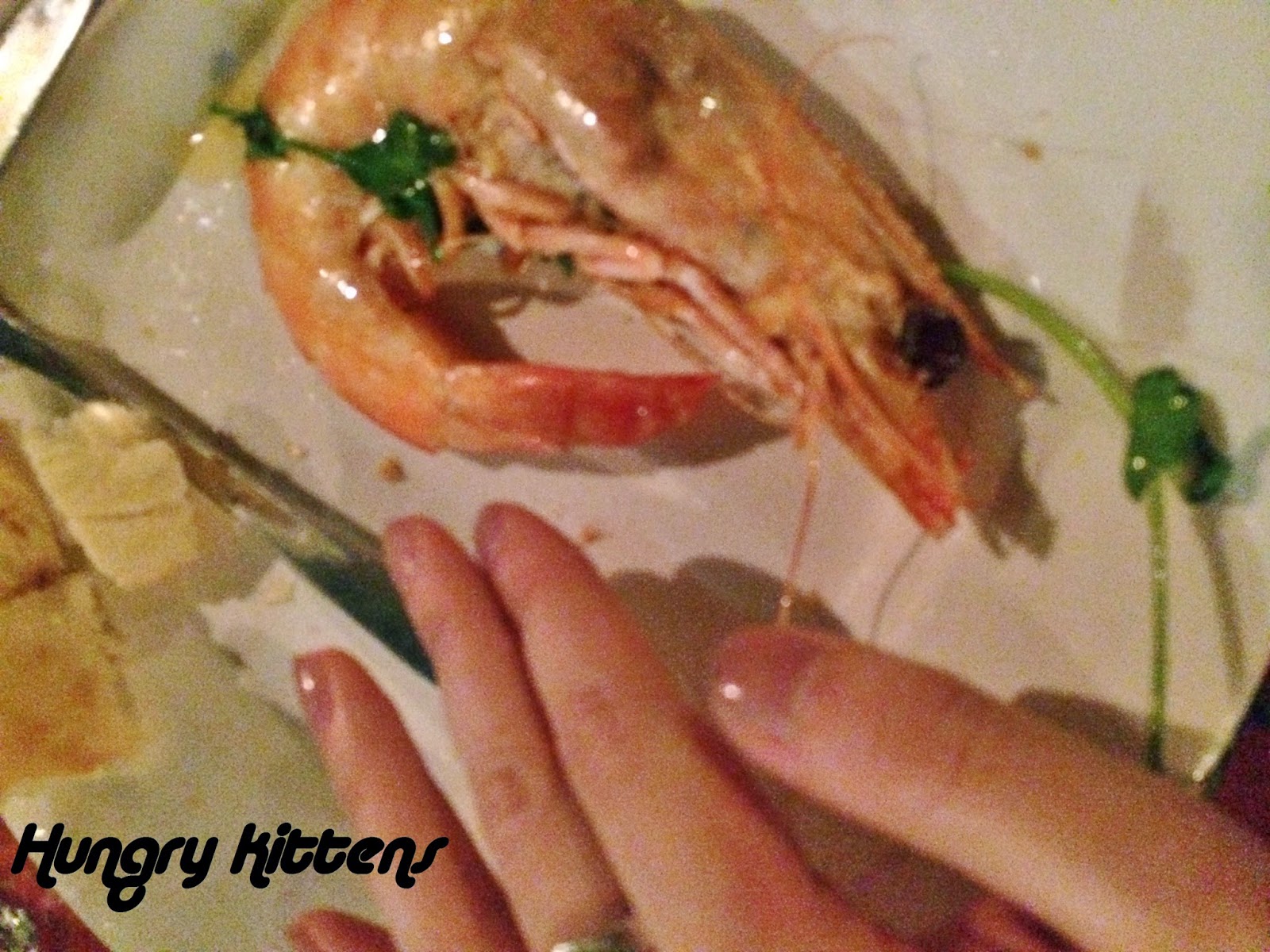 Nearly the size of my hand

Shelling these babies was a breeze and the meat was juicy, sweet and above all, plentiful. The sauce was a savoury, tomatoey stew and because it absorbed the juices from the prawns, it was oh so tasty to dip the bread in. There was bread that came with this dish but I also had bread saved from the starters that I dipped in as well. Delicious. 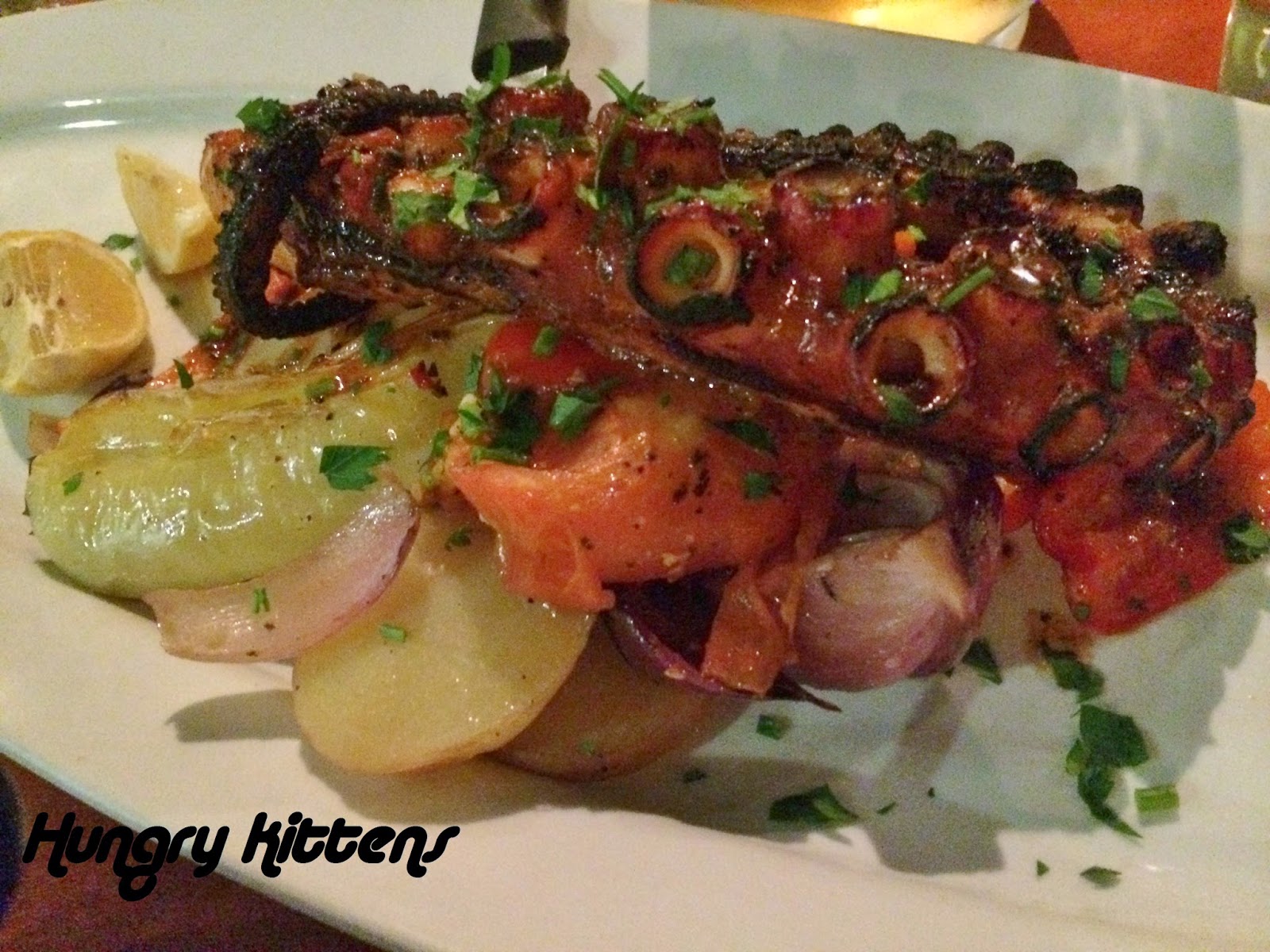 Our next dish brought to mind the sea creature propped up on the ceiling. There was a giant tendril of suction cups strewn casually across the plate. I think that all food becomes normal if you eat enough of it. For instance things like kidney, liver, duck necks/tongue amd tripe are all a normal part of Chinese cuisine and I don't even blink when it's served. However, octopus isn't and has never been part of my routine diet, especially huge versions like this one. I'll admit I saw the tentacles and baulked a bit but my love of food overrode any apprehensions. The octopus was yummy! I haven't yet sampled a 'bad' version of octopus (again, probably because I don't eat it often) so those claims about how rubbery and chewy it can be is still an unreality to me. The octopus at Claypots was nice and tender and the flavour had penetrated the meat. It was served on top of some cooked peppers and onion. Mochi loved the onion. 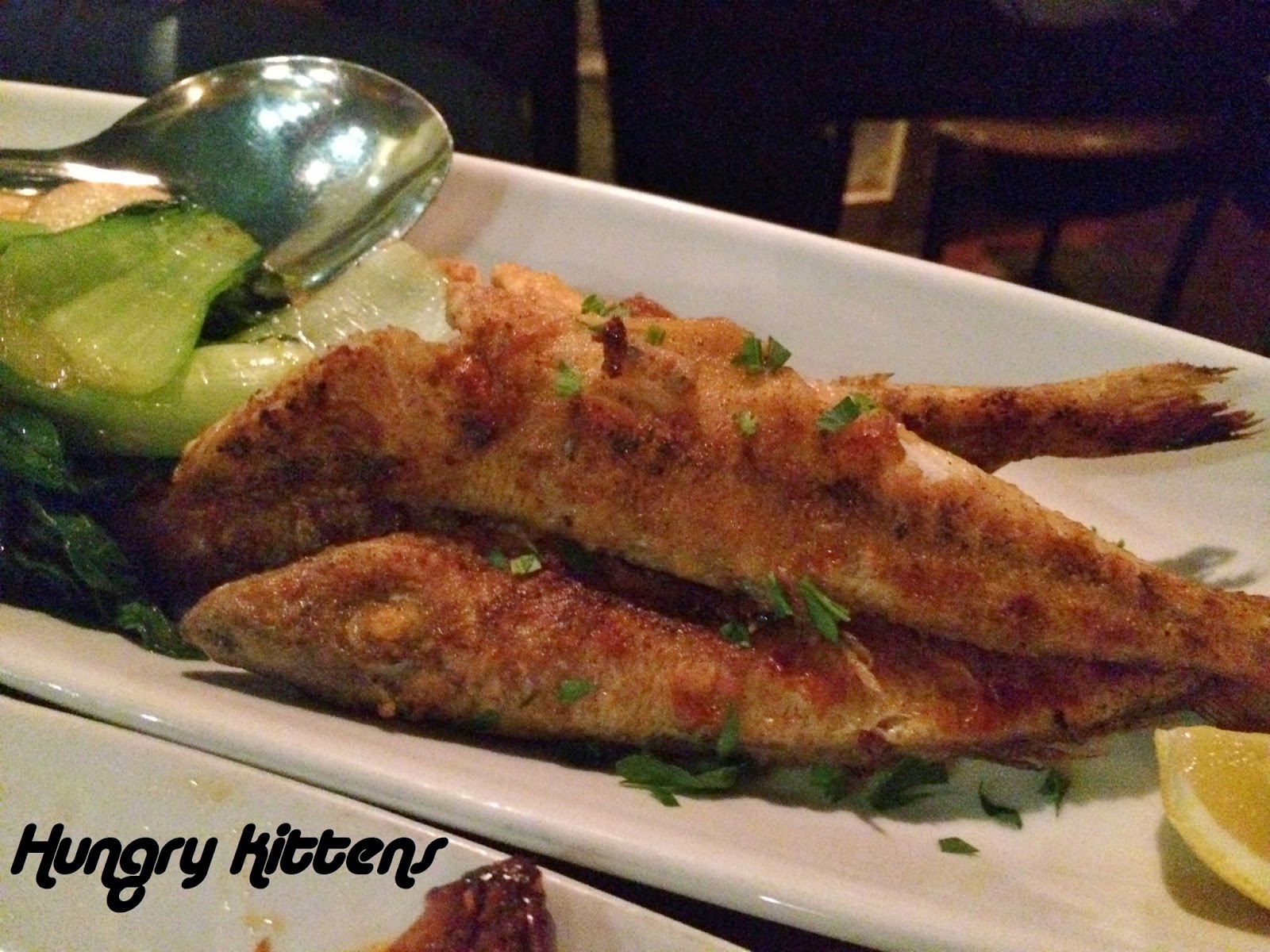 We completed our seafood feast with two types of fish. The first was a fried whiting, served with a side of potatoes and bok choi. The whiting wasn't heavy on flavour but the meat was just cooked so it was nice and tender. They were whole fish so we had to utilise our cutlery with skill to part flesh from bone. With the whiting I found it relatively easy. 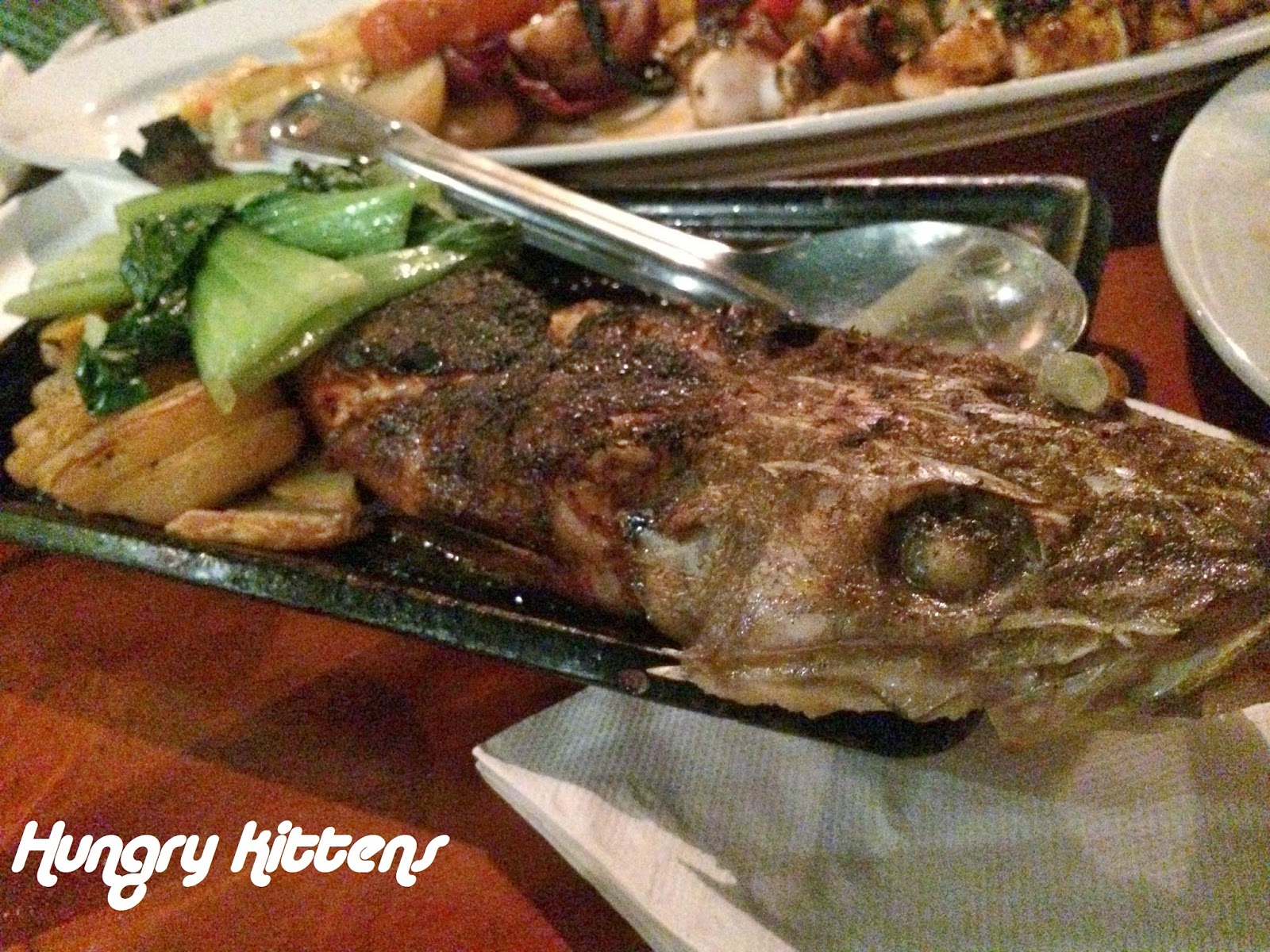 What was more challenging was the flathead. Marc commented that he liked the flavour of the flathead more because it was more intense and had a kick of spice. That may be so but it was too much of a struggle for me to eat. With most Asian cuisines, much is made of 'eating meat off the bone' because that's where the flavour is. Filleting is considered to make food bland and tasteless. I do agree with that whole philosophy but when it comes to fish, I find that if it gets to being too much of a struggle, the effort outweighs the benefit. I know that's just a me-thing though because I've seen first hand how someone who's skilled at eating bony whole fish can do it like it's second nature.

Having whinged about the bone issue, I am impressed that Claypots doesn't take the compromised route by serving up lazy fillets. To me, whole fish dishes indicate that they prioritise taste and inexperienced clients myself should really just improve or suck it up.

The service at Claypots seamed scattered at first because it took us a while to get seated. Once that was sorted, our waitstaff seemed really attentive and the food came out quickly considering how packed the restaurant was. With seafood, the most important thing is freshness of produce and spot on cooking. Claypots really lets their seafood do the talking and other components of the dish are simply there as an adjunct. I liked the prawns best and the octopus left a wonderfully vivid impression on me. I would love to go back one day and sit down to two pots of mussels to myself. With dipping bread of course!