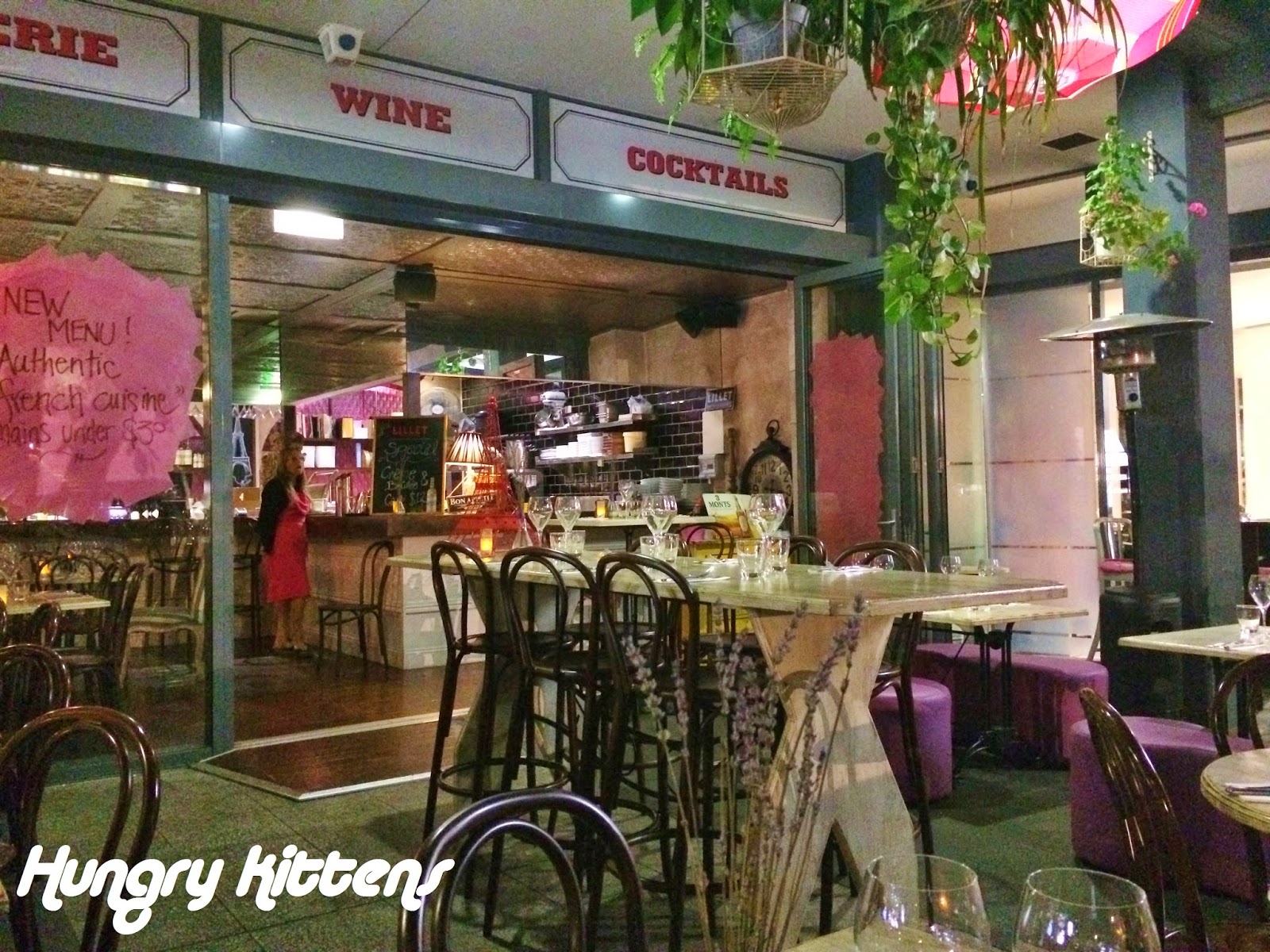 A friend of ours, Lilly, was going back to Taiwan so we caught up over a farewell dinner. It was State of Origin night so everyone was keen to avoid any restaurants that would force us to travel through blocked streets and congested traffic. We ended up meeting in Southbank Parklands.


French Martini has been on my to do list for a long time. I've attempted to try it with my friend Blossom on a number of occasions but once, we had to cancel and another time, it was closed. When we found ourselves in Southbank looking for a dinner venue, I didn't hesitate in suggesting French Martini and this time, the stars aligned. 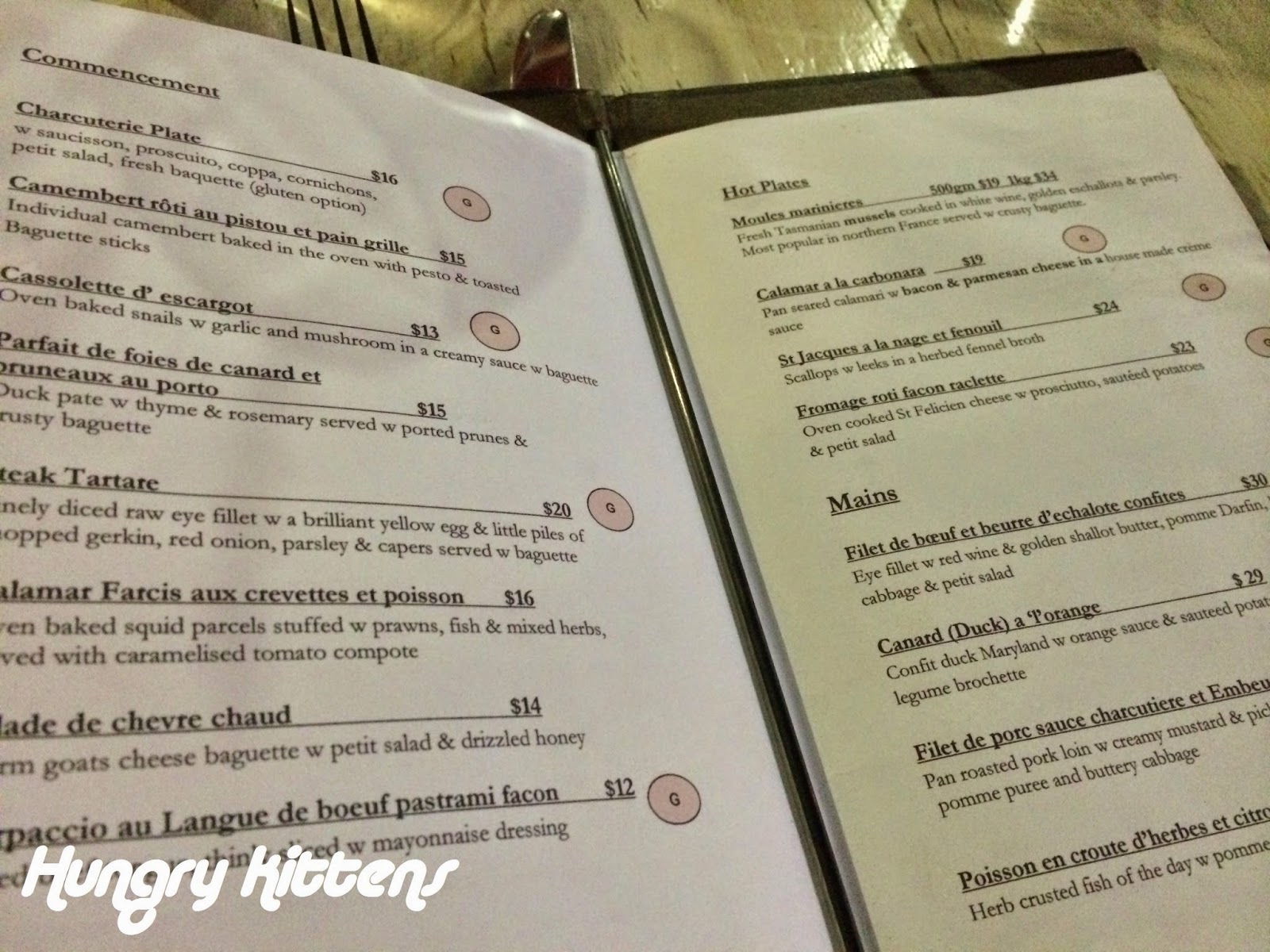 We were greeted by a lovely waitress outside the restaurant and took up some outdoor lounge seating. I always picked this as a place I would visit with a girlfriend because the decor is quite feminine. Luckily, they serve proper hearty meals on their menu so Marc wasn't too discouraged. 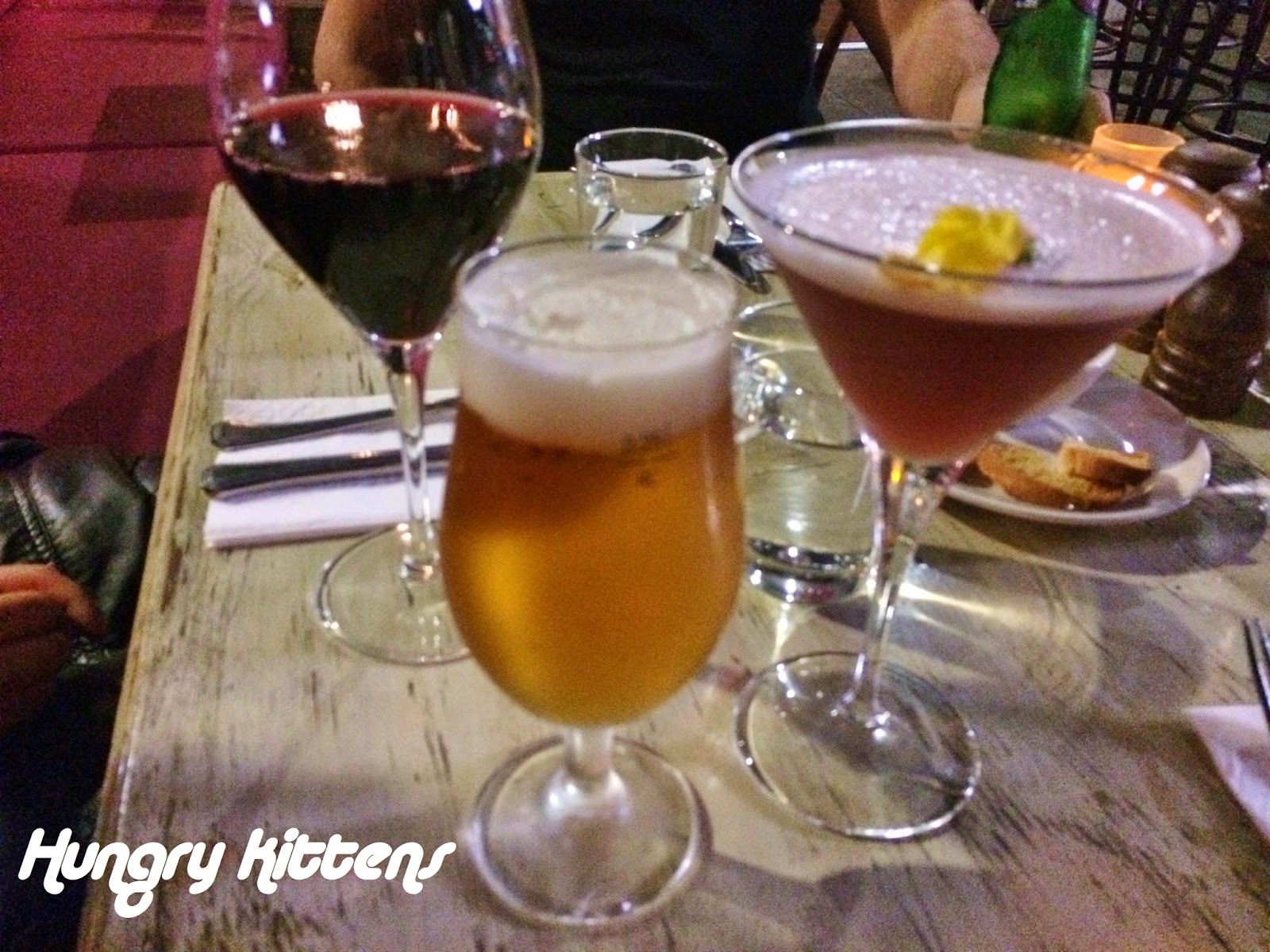 Drinkies for our group

You won't be surprised to learn that French Martini is a bar. All the classic cocktails are available, as well as beer, wine, and a list of martini varieties. I chose the FM signature martini, Marc a beer, and Lilly a glass of red. I've had really bad experiences with martinis in the past but this version was fruity and sweet without any poisonous alcoholic burn. 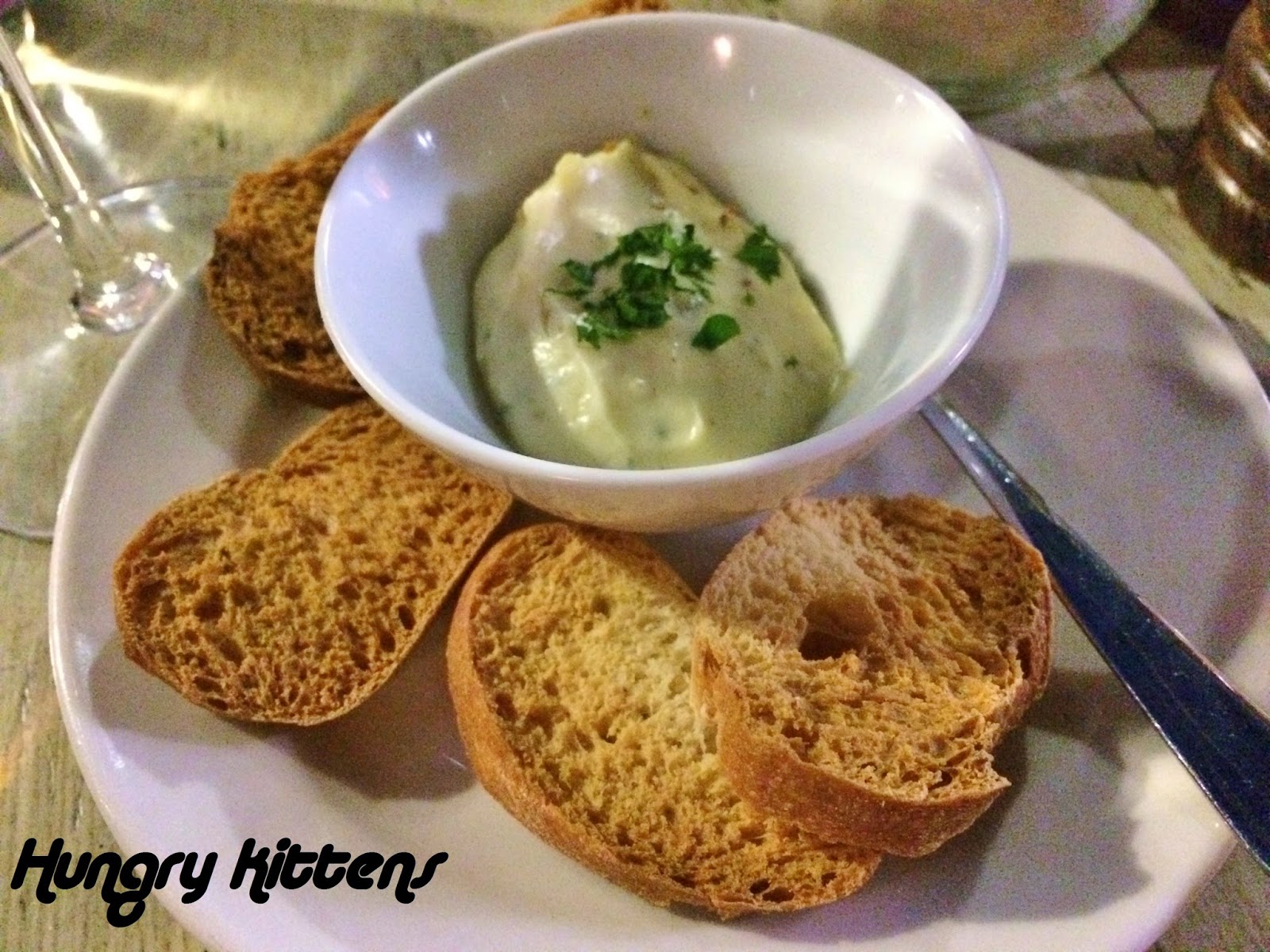 We were brought out some amuse bouche to start with. These were hard bread croutons and a blue cheese dip. The dip was alright but the bread was too hard for me to bite into. 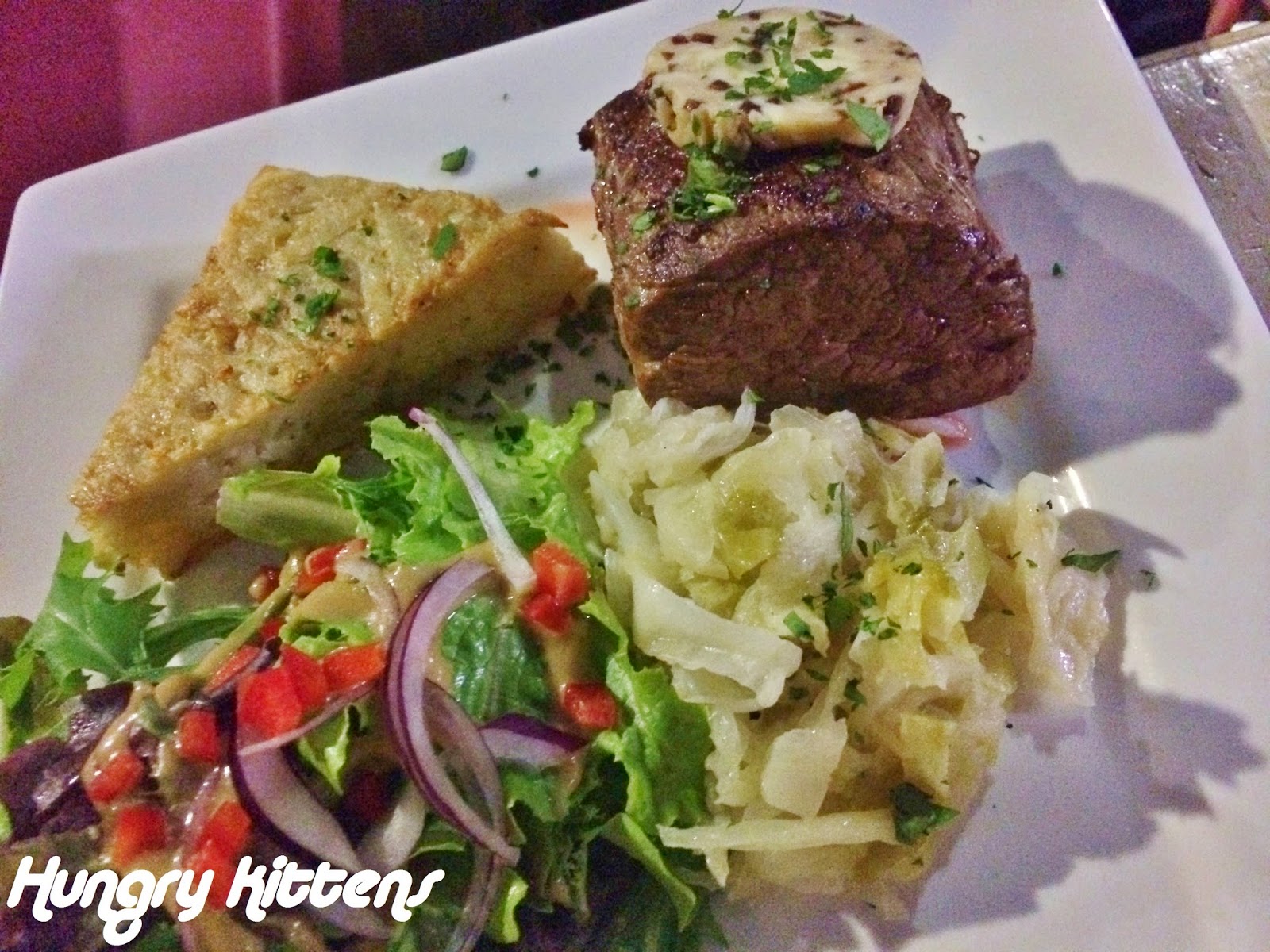 Marc, the typical male, ordered the steak with potato mash. He commented that the steak was cooked really well and decently portioned. He liked the butter on top because it melted and oozed over the meat as he cut into it. 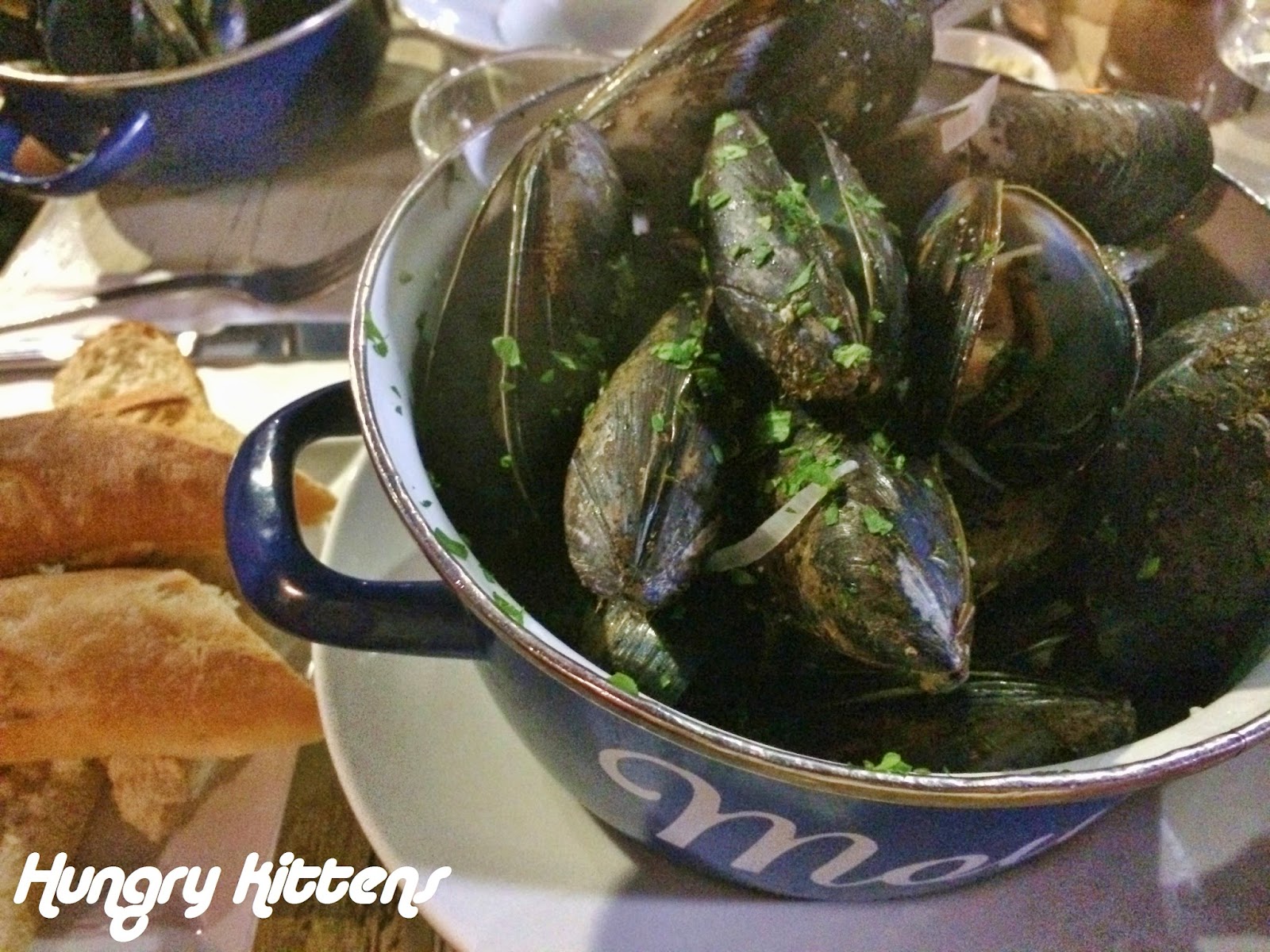 Both Lilly and myself went for the mussels. It comes in either a 500g or 1kg option. Lilly chose 500g but as I'm a bottomless pitt for eating, I unashamedly asked for 1kg. I should mention that lately, I have these incredibly cravings for mussel pots. Whenever I get hungry, I start thinking about bread dipped in creamy mussel sauce. This dish at French Martini was everything I had been dreaming about.

When Lilly got her pot, I thought it was big. My pot was huge. We nearly ran out of room on our little table. Without thought of etiquette, I started chomping down my mussels. It's in no way a ladylike food to eat. You have to use your fingers and they're going to get covered in sauce. I had such a good time popping the mussel flesh out of the shells though and I never care about getting dirty for food. The mussels were large and fleshy. Lilly didn't get any unopened shells but I had 4 in total. The sauce was slurpy and garlicky and creamy and delicious. I was impressed by the dipping bread provided. I expected it to be old and stale but it was a nice chewy baguette that was perfect for soaking up the sauce.

I really enjoyed my cocktail and pot of mussels at French Martini. The environment is nice but I maintain that it's best suited to girly catchups. Our waitress (possibly the owner?) spoke to us with pops of French so I would guess that she is French. That definitely adds a touch of authenticity to the venue.