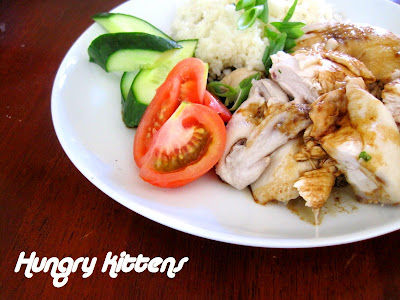 On those really hot, sticky, blazing Summer days (such as what we've been getting of late), the last thing you want to stomach is hot food. Despite this, we still gotta eat, right? I'm not one to let the weather get in the way of a good meal. What we must do is compromise. Hainanese chicken rice aka Hai Nam chicken rice is not something I was crazy about as a kid. It's quite a subtle/understated dish and when you're young and obsessed with cheese, sauce, sweet and sour etc, it's easy to think of this dish as bland.

My opinion's done a 180, especially with this rendition. I have no claims on authenticity (as with most things I cook); we didn't even follow a recipe. But the end result is tasty, great for Summer and lots of fun. Bland is not part of it! 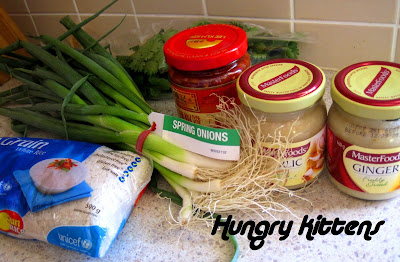 All the good stuff - ready to get some awesome sauces happening

The theory is thus: my cooking buddy and I realized that any dish that comes with a hoard of sauces, dips and accompaniments automatically becomes awesome. It's like, your brain automatically gets excited about the variety and all the potential combinations. Everyone likes a bit of DIY and customization. 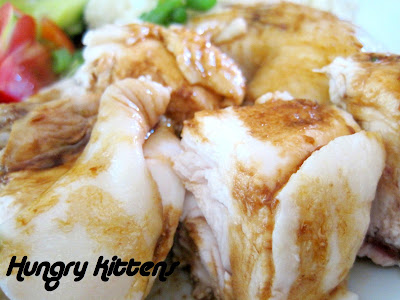 With this Hainanese chicken dish, we've got the chicken (check), rice (check) but more importantly, the trio of sauces that brings this otherwise plain meal to the next level.

I didn't give quantities for the sauces because it's all a matter of preference. Better to take the suggestions and mix and match to suit your own.

For the chicken
For the rice
For the sauces
Procedure

1. Plop the chicken into a large pots on the stove and fill with water. Bring to the boil and keep it boiling away. We had an argument about the end color of the chicken and my friend was convinced that adding some dark soy would help the appearance. You can do that if you wish, though I don't guarantee it makes a difference. 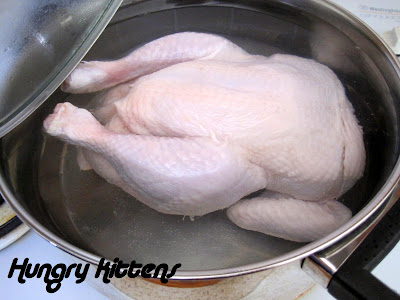 2. Cut the tomato into wedges and cucumber into slices.
3. Prepare the sauces... we did 3: garlic + chili (with a bit of vinegar), garlic + ginger (with chopped coriander) and sesame oil + soy sauce. 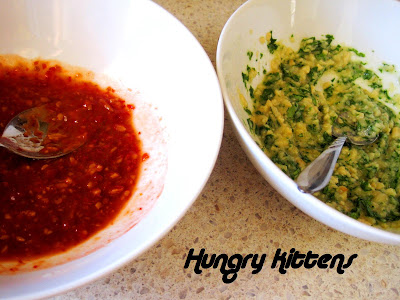 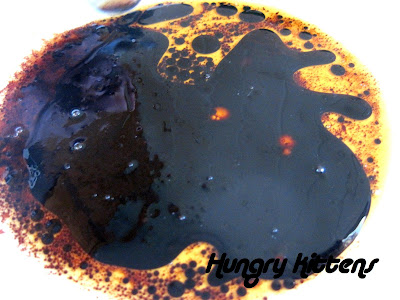 4. Once the fat starts coming out of the chicken and into the surrounding water, you know you're getting a nice chicken broth. You can get the rice going at this point. Put the stock powder, pepper and a bit of sesame oil in a small saucepan on the stove. Add the cup of rice. Add 1 cup of water and when you have enough broth to spare, 1 cup of broth too. Cook with the lid off until absorbed and fluffy. Stir with a fork and let excess moisture evaporate. 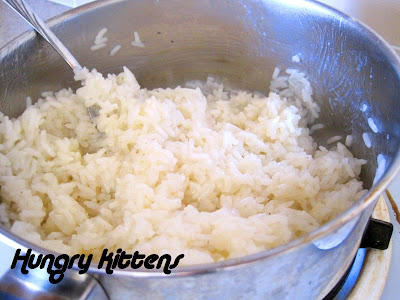 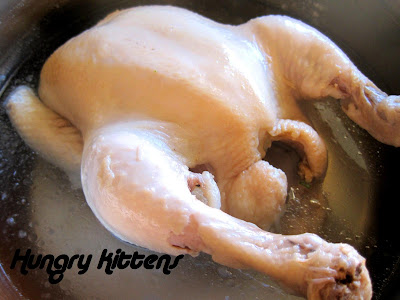 Putting it all together...

6. Chop the chicken up in a manner you prefer. Traditionally, it's cut into pretty little pieces but we're not very picky and my mate prefers larger chunks so we did standard quarter cuts. I specifically requested some of my larger pieces to be broken down.
7. Arrange the chicken, rice, tomato and cucumber on a plate. Garnish with chopped shallots. 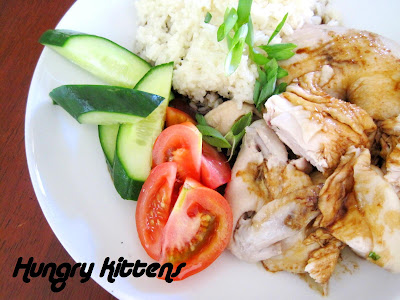 8. You can then decide how you would like to use the sauces. We poured the sesame oil + soy sauce over the chicken and kept the other 2 separately for dipping. 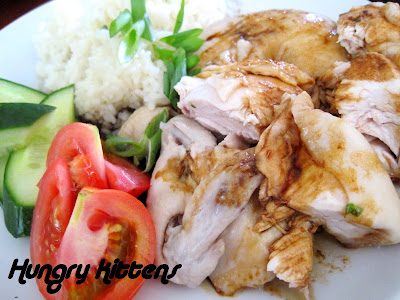 I really enjoyed this dish. It took time and preparation but overall, it wasn't difficult at all. The sauces really 'made' the meal. I included a photo of the brands we used a the top of the post so you can follow along. They were REALLY good sauces and everything worked great together.

You can pour on bucket loads like my friend... 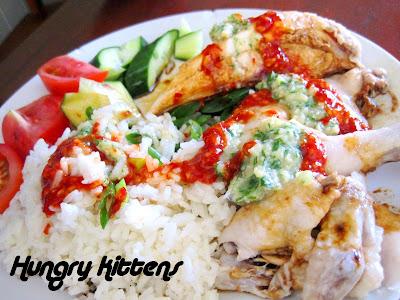 Or be a bit more refined like me and have separate pools in the corner... 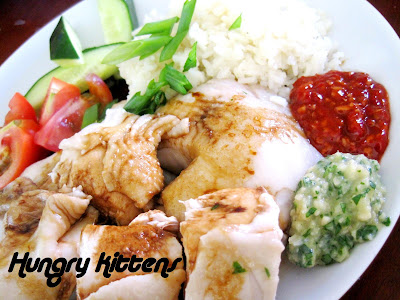 Or just dip as you wish. Have fun with this dish. It's great for Summer and great with beer and the way we do it, there are no rules.
Labels: Favorite Recipes, Home Cooking, Mains, Savory, Stove Top