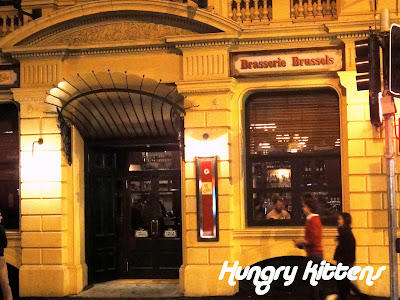 Last weekend was my mini weekend holiday in Brissie. I booked a little hotel room and called out all my friends to party it up. I didn't really have any dinner plans for Saturday evening, which is rare for me. But I was more focused on getting pissed. Only being honest here :).

Me and a few of my mates ended up heading to the Belgian Beer Cafe. I threw out a couple of my cravings at the time: German or Mexican. We opted for German because it was closer. 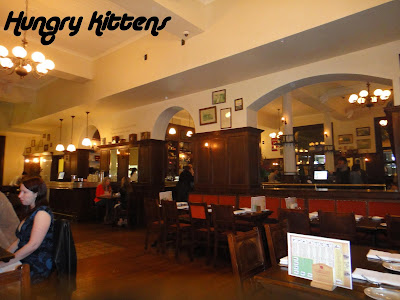 We thought about walking but I was cold and hungry and insisted on a cab. After an afternoon of drinking, I was slightly tipsy but not far gone enough to not notice the cabbie short-changed me $3. I thought about saying something but let it slide in favor of good karma. Or something. 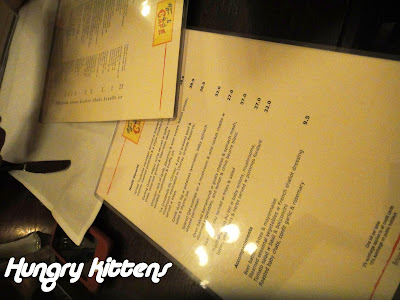 Heading into the Belgian Beer Cafe, we noticed a lot of suits. My little group looked a bit out of place :(. We asked for a table and were told there would be a 15min wait and would we like to wait at the bar? We headed to the outside bar, which was very nice, and sat down to a few beers. 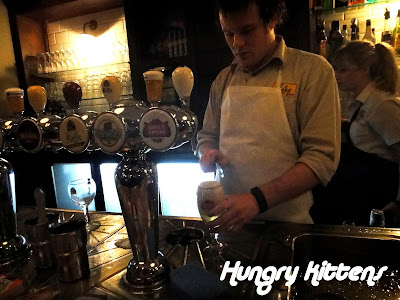 One beer became two became many because I don't know how long we waited but it was distinctly more than 15min. Perhaps close to 45min or even an hour. 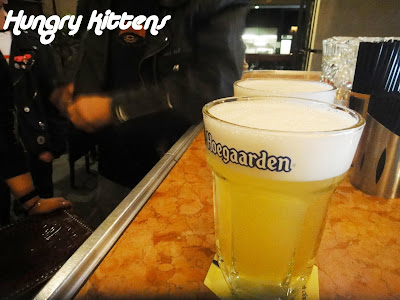 During this time, we weren't too frazzled because the huge pints of beer were enough to keep our belly's full. I sampled a few beers that I've never tried before. They do some fancy things with the glasses too - felt like pro beer handling. The Hoegaarden reminded me of lemon meringue. A woman sitting at the bar recommended her boyfriend's Leffe Brune which she described as having a 'coffee' flavor. It did but I prefer Guiness for dark beer.

More waiting occurred. We chased up about 4 waitresses to no avail.

Finally I got up and went to see what the deal was once and for all. This time the waitress literally looked at me and said 'no tables!' I said 'we put our names down bout 45min ago'. She looked a bit disappointed and then admitted 'oh... you're over there'.

Haha didn't think they were getting rid of us that easily. 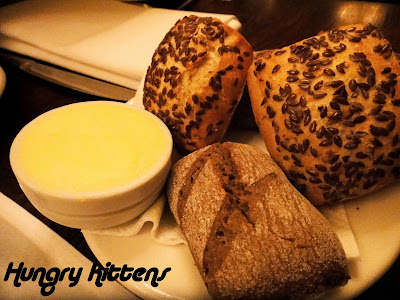 A basket of bread was brought out. There was a combination of seed buns and rye buns. I tried a bit of both. I thought the rye bun was yum. By then I was famished though so I probably could've eaten the basket and thought the same.

We ended up ordering one entree (salt and pepper squid) and 4 mains between us, to be brought out at the same time. So it looked like we had 5 mains on the table. 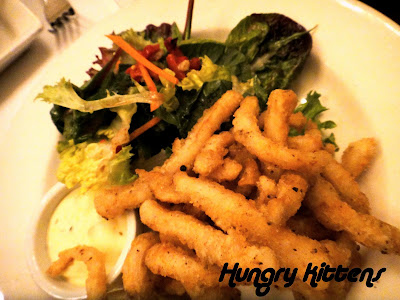 I'll start with the squid since it was technically the entree. Jaz loved it. She thought it was fabulous and I remember at the time such compliments as 'soft and not too chewy but crunchy on the outside'. It was a pity we chose this dish in entree size. 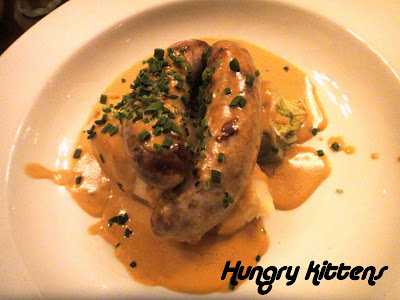 My main was the sausages and mash. Sausages were very average. I reckon the gourmet range from Woolies would've topped that. The mash was alright but it's not hard to get mashed potato tasting good (hint: add butter). 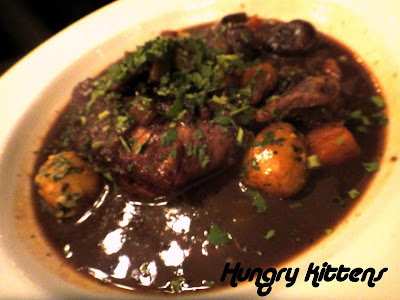 Jaz's main was the coq au vin. She really didn't seem to like it and spent most of the meal wishing she had more calamari. I tried a bit at the end and thought it was actually quite delicious. The sauce has a mild wine flavor but it was a beautiful balance of sour, savory and sweet. 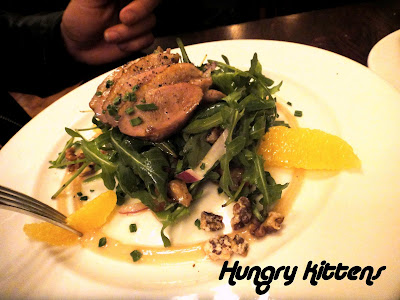 Zen ordered the duck salad entree as a main. He said that overall, it was good but the duck on its own was nothing special. A bit boring in fact. 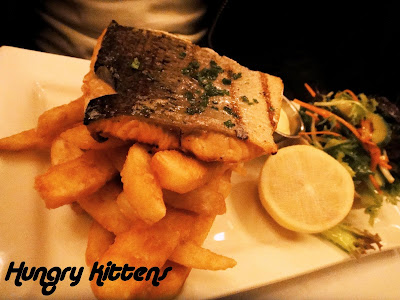 Rowe's pick was the fish of the day - salmon. I tried a bit and thought 'yup, salmon'. Zen agreed that it was nothing special. Rowe thought it was beautiful though and as the person eating the whole thing, perhaps his opinion counts more. 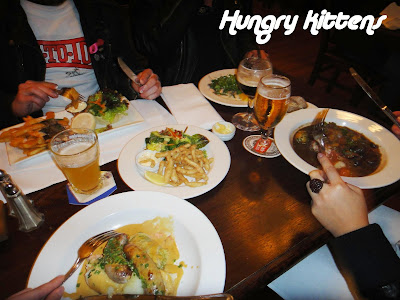 I was astonished by how snobby the service at Belgian Beer Cafe. The waitress (I think we had 2 but they looked similar and had a similar attitude) were very unimpressed by our being there. The boys tried to crack a few jokes which fell on gargoyle-cold expressions that basically said 'fuck off I'm the superior human being here'.

Granted, we don't wear suits and look the part of a city business man but all we wanted was to sit down and have a meal. It wasn't like we were begging for freebies. Though we might have looked like a hodge podge of riff raffs, our group comprised of a teacher, a lawyer, a dentist and a guy who's just started his own business. And we had dough to spend. Which proves you shouldn't judge a book by its cover.

I have eaten at some of the finest restaurants in Brisbane and elsewhere and I have never in my life felt so discriminated upon. Belgium Beer Cafe can stuff it.
Labels: Casual Dining, CBD and Surroundings, Dining Out, German Restaurants