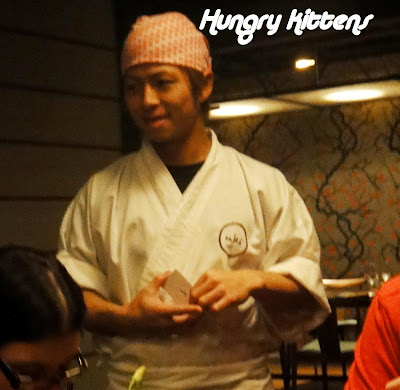 Last night, I had the honor of being invited to a special blogger's dinner event at Sake Restaurant in Brisbane. It was my first time being invited to anything for this blog and I was giddy with excitement and nerves. 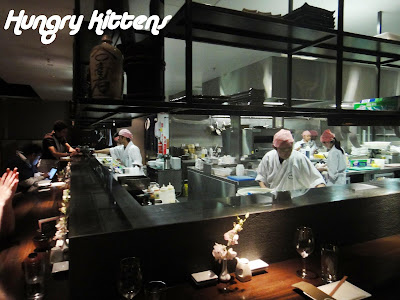 Because it was a week night in Brisbane, I took the afternoon off work to zip down so I could attend. Hmmm... an afternoon of drilling and tooth pulling or an evening of fine food and beautiful company? It was a no-brainer really.


Despite my careful planning to avoid arriving too early, I managed to be the first one the scene. I was invited to have a drink at the bar to which I replied "YES PLEASE" a little too quickly and enthusiastically.

I sat at the bar, anxious. Would anyone show up? Would I be tested on how much I knew about the restaurant? Will I disappoint by having a tiny, crusty point-and-shoot rather than a professional DSLR?

Half a Berry Calpis (one of their splendid cocktails) later, more bloggers arrived and I painstakingly tried to remember everyone's names. It's odd when you know people by their blogs and then meet them for the first time in real life. Thankfully, everyone was so sweet and friendly. Huge sigh of relief. 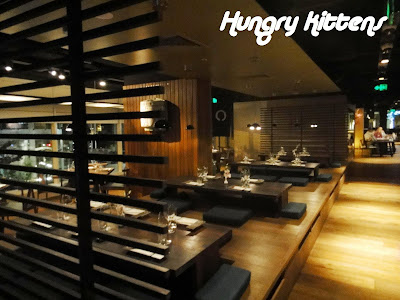 We bonded (well, not really, because everyone else knew each other) and were then lead into a private dining room at the back of the restaurant. 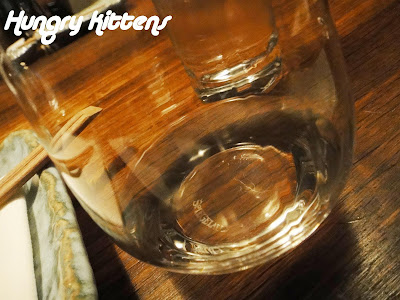 After some welcome speeches and further chatting was carried out, the first course of sake, the Amabuki Daiginjo, was presented. We were to be having 3 sake tastings through the night to accompany the food. The Amabuki Daiginjo was matched to our first 2 courses. 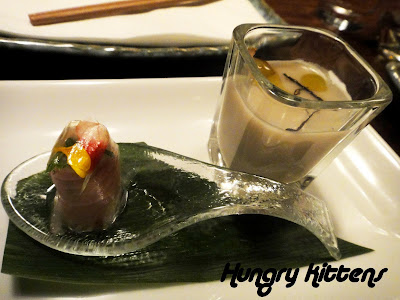 Amuse bouche was a spoonful of amberjack and a shotglass of sati-imo soup. Sati-imo is Japanese taro and it was cooked into a beautiful, silky smooth soup. The amberjack was so fresh. We later learned from Shinichi himself that the amberjack were only caught that morning. 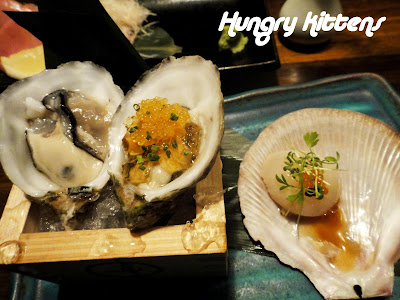 Our first course was oysters and scallops. I liked the dressed oyster but preferred the natural. I'm not a huge fan of scallop so it didn't really tickle my fancy. 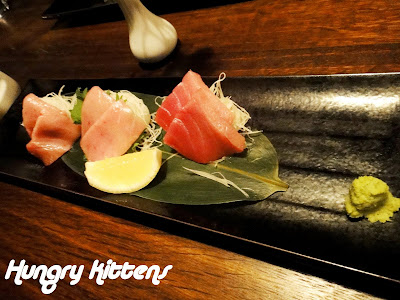 Sashimi was brought out as well. At the time I thought I was eating 3 types of fish but now know it was 3 different cuts of Southern blue fin tuna. This was one of my favorite courses. Sashimi is so simple but rarely done well because it relies so heavily on the quality of produce. I thought this was perhaps the best sashimi I've ever tasted (bar the last time I ate at Sake).

Our next sake was brought out: Kozaemon Junmai Ginjo. It was matched to the next 2 courses. 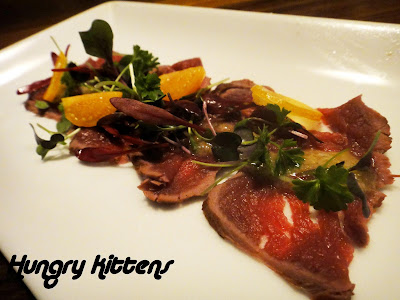 The first of these was the venison tataki. I really enjoyed this dish. It was very delicate but each mouthful popped with flavor. The sweet and sour from the pickled pears and plum worked perfectly with the venison. 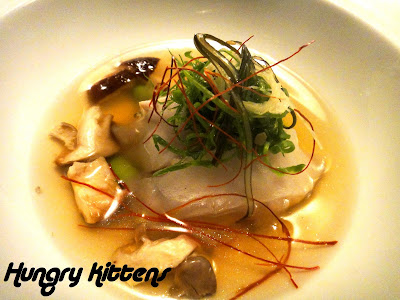 Next came the spanner crab and tuna dumpling. It was served in a shiitake mushroom consomme and the consomme knocked my socks of. It was beautiful, smooth and clear with an exquisite, earthy seafood flavor.

The final sake for the evening was the Kozaemon Yamahai Junmai Banshu Yamadanishiki (what a mouthful!) which is the most acidic and robust of the lot. Those who were not familiar with sake remarked that this tasted the most 'familiar' as it had the acidity of red wine. It was to accompany the mains. 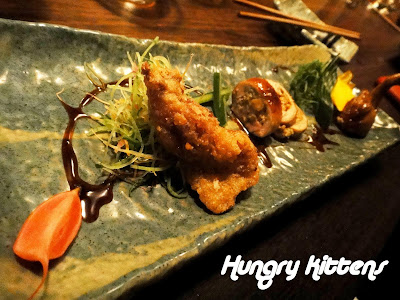 Our first main was quail three-ways. My favorite component was the galantine of quail and I couldn't help but marvel at the technique behind stuffing something so small.

At this point, Shinichi made an appearance and we thanked him heartily for his creations. He asked if we were ready for our wagyu. Harharhar... we are a table of seasoned food bloggers. We are ALWAYS ready for more food. Bloated bellies are not a problem. 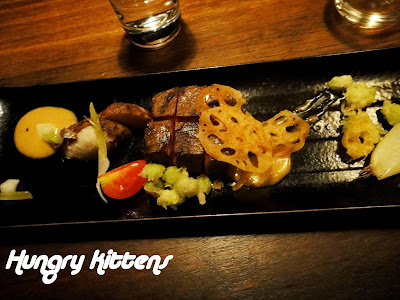 The wagyu was served with some wonderful accompaniments. The confit sato-imo was soft and melty. I haven't tasted this kind of savory taro outside of China. Here, we're used to thinking of taro as a purple, desserty root vegetable. In China, I had lovely small, white taros that are savory like white potato but with a silkier, slipperier flesh. This was of the same type. The tempura edamame were cute and innovative. We all adored the lotus chips. 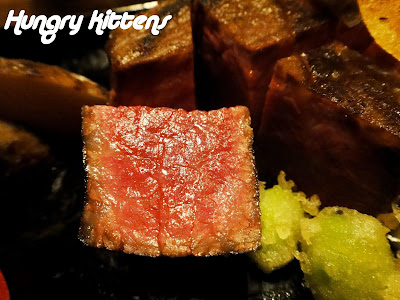 As for the wagyu itself, it was cooked perfectly. The portion was cut into cubes and each mouthful was a delight. 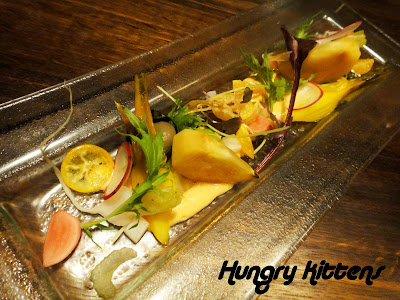 Along with the mains, we were served a Winter salad. The terms 'Winter salad' brings to mind thoughts of silverbeet, root vegetables and general 'heaviness'. I loved that Shinichi's Winter salad was still light and fresh but featuring seasonal vegetables and their best. 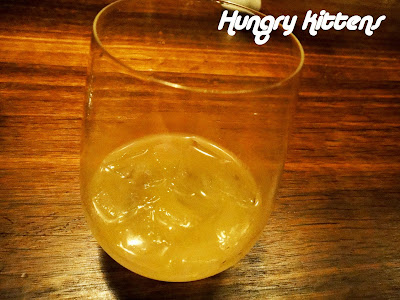 Our final pre-dessert sake was the kozaemon kobasu which had a sharp, sour tang. It served well as a palate-cleanser for our final course. 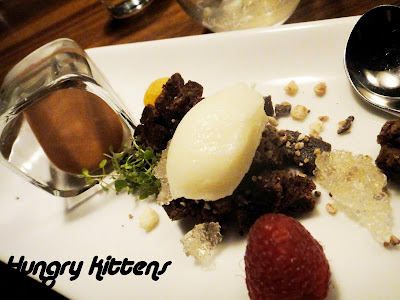 The dessert was called a 'Chocolate Garden' and was inspired by Shinichi's childhood playing football in the yard. I had been disappointed by Sake's dessert when I ate there earlier this year but this dessert changed my mind completely. It was suggested that we start with the chocolate jelly, being the most delicate component on the plate. I thought it would have a very light chocolate flavor but it packed a punch! Very special. The white chocolate sorbet was delicious, especially when eaten with the sticky, gooey and crunchy brownie chunks (aka 'chocolate sand'). The dark chocolate bavarois was smooth and light. It wasn't too sweet either. Although the dessert was heavily chocolate-themed, the different textures made it extremely edible and not at all cloying.

This meal at Sake was a magical experience. As well as meeting fellow Brisbane food bloggers for the first time, it was an honor to meet the head chef, Shinichi Maeda. Seeing the man responsible for creating the food you're eating just brings to light that it's a creative process and someone's mind is behind it all!

Everything we ate was flawless in presentation. Each course looked like a work of art. 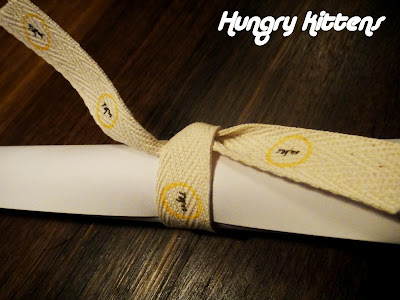 What I loved was that a Japanese degustation doesn't leave you clutching your belly, unbuttoning your pants and waddling out the door. The dishes were small, detailed and tasted 'healthy' too. The emphasis was on local, fresh, high-quality ingredients and careful technique to bring these flavors out.

My first meal at Sake was a great experience. I'm glad to say that even though this degustation dinner was more 'VIP', the service I had on both occasions was no different. This is a restaurant that's excelling in taste, innovation, service and atmosphere. I highly recommend Brisbanites to try Sake at least once.
Labels: Asian Restaurants, CBD and Surroundings, Dining Out, Informal Dining, Special Events