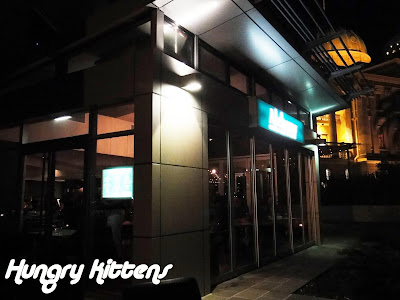 I've had a many-month-long dry spell from fine dining restaurants. One of my reliable eating buddies, Hien, has been on another planet for a while (aka holed up at uni finishing his Honor's Thesis) and because of this, I've been much slower with my posts. 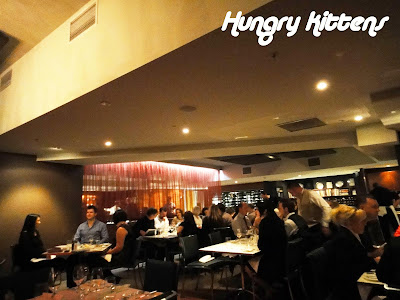 Finally, he finished last week so we made the long overdue eating appointment for the weekend. I was left with the task of choosing a restaurant. I went with Alchemy and my criteria for deciding this was "where would Byron definitely not want to go with me". He has a 'thing' against anywhere that serves over-flourished food in little dollops. Well, I don't! 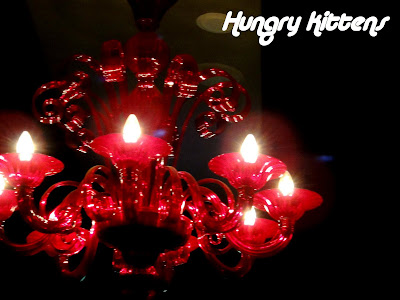 It took us ages to even find Alchemy. I thought I knew where it was. We parked and got lost and arrived late. 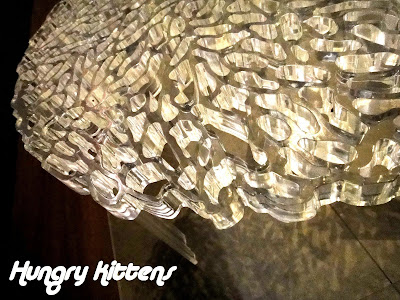 It was bustling by the time we got there. I was relieved by this because hushed-up restaurants with just a small number of other diners in fancy suits is not my cup of tea. I liked that there were a few contemporary elements to the decor but overall, it wasn't at all cold or stark. 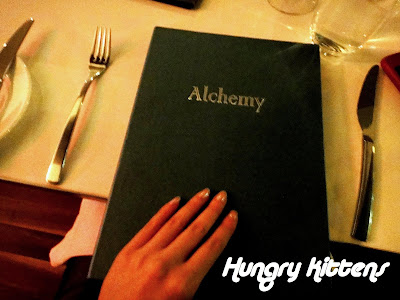 I had a browse through the drinks menu and we put down beverage orders before we were shown to our table. 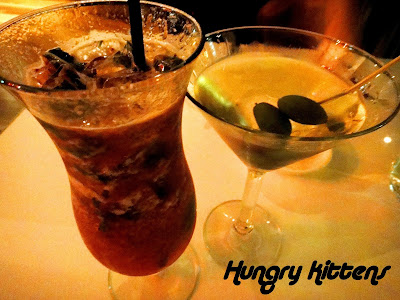 My drink of choice was the peppered strawberry mojito. The word 'peppered' put me off a bit but I didn't detect any heat so I'm not sure if they meant actual pepper. The strawberry mojito was delicious - very refreshing, nicely balanced and containing fresh strawberry pulp. Hien ordered a martini which I declined to try because I regret it every time I do. 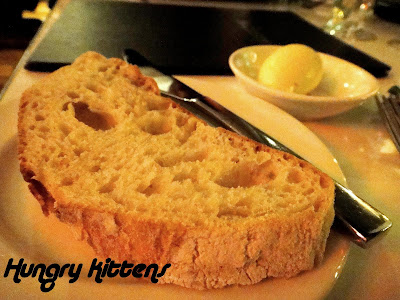 Complimentary bread was provided along with a whipped butter. The butter confused me because it was very sweet. I found myself wishing I had some pancakes to slather with instead. 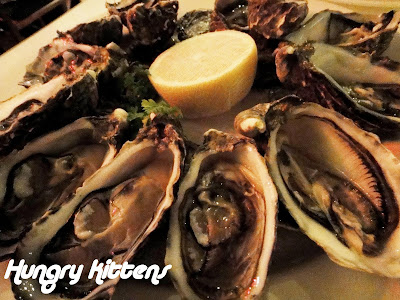 To start with, we ordered a dozen oysters. We actually ordered half a dozen but a dozen came and we went with it. Nothing to complain about - they were nice oysters. We had the option of sweeter, earlier-harvested oysters or the larger ones. We went with the larger ones and they were fresh and smooth. Mum asked me "what type of oysters were they" and I'm sure we were told but I, at least, didn't pay attention. 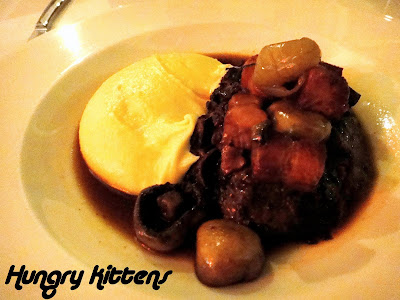 Hien ordered one of the specials of the day for his main, which was beef cheeks with creamy mash. I tried a bit of the beef. It is supposed to be slow cooked over 12-18 hours and it was definitely tender. I've got a slow cooker myself, that I use quite often so I wasn't blown out of the water by the tenderness. Maybe I'm spoilt. 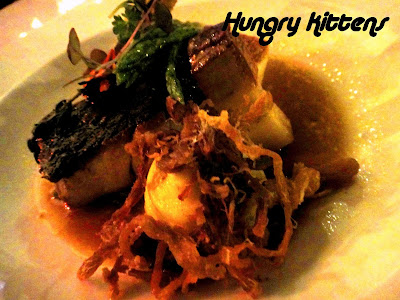 My main was the barramundi with pork belly. I'm not sure about pork and barramundi as a combination... it didn't seem like a marriage in heaven. Aside from that, the fish was cooked really well, which is not a compliment I give often for Western restaurants. The dollops of mash were really creamy and delicious.

I was really excited about dessert because I had read the dessert menu on Alchemy's restaurant and everything sounded good. I insisted that we weren't sharing a dessert but order one each. Even then, I had a hard time deciding. 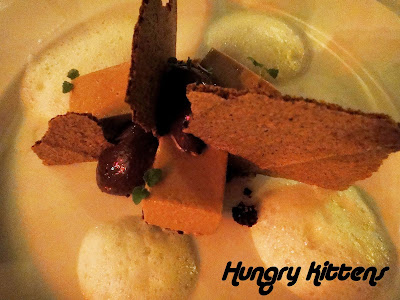 Hazelnut and nougatine mousse - with choclate cream and chocolate crumble

I ended up going with the hazelnut and nougatine mousse. It was rich, smooth and creamy. The chocolate cream was a bit too sweet and wasn't dissimilar to nutella straight out of the jar. 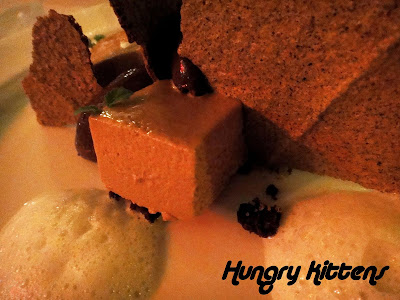 I couldn't figure out what the foam was because it wasn't mentioned on the menu and didn't have much flavor. The 'chocolate crumble' was like a milo waffer - awesome. 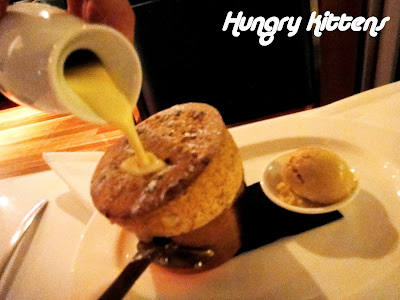 What I really enjoyed was Hien's dessert. He chose the caramelized apple souffle. When it arrived, the waitress poured creme anglais straight into the middle. Hien was visiting the bathroom at the time and I sure didn't wait for him to come back before tucking into his dessert. Lovely soft souffle with an impressive crunchy top. 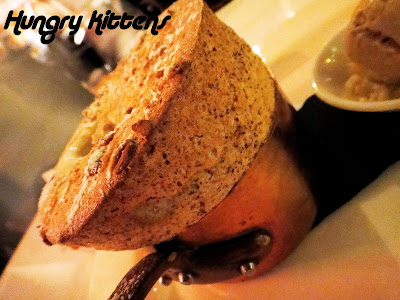 The thing that left the biggest impression out of the whole meal was the brown butter and raisin ice-cream. It was amazing. I would love a whole bucket of that.

We liked Alchemy. Service was good. I'm finding it harder and harder to be impressed at fine dining restaurants but this was definitely better than most I've tried. The desserts were more exciting to me than the other food and I'd love to go back to try some of their others.