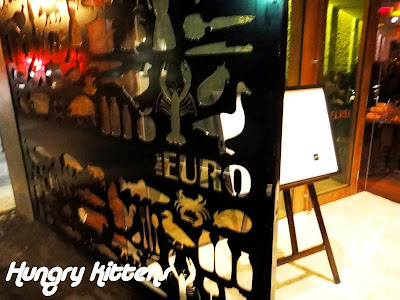 It's mum's birthday next week and we've been up to our necks in advice re: Chinese superstition 'you must celebrate your 50th birthday when you're 49' and so on. We all got very confused and then figured... what the heck, let's just celebrate this year, and next year, and every other year. 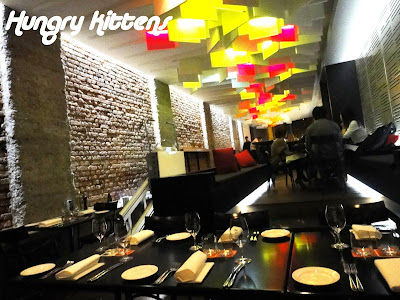 I'm terrible with knowing what people like to get for birthday's. I've probably mentioned before that I have no sensitivity in this area at all. So when it came down to me, I chose for us to all eat out. Because eating out is what I do best.


It's getting to the point where I feel out of date with what's hot and happening in Brisbane. Living in Toowoomba seems to be keeping me out of the food loop.

Nevertheless, that's nothing that Google can't solve. A quick search of something generic like 'best Brisbane restaurant' led me to to realize that nothing much has been happening since I left Brisbane after all, because the same old names are still around, one of which was Urbane.

I scrapped Urbane as a suitable option because my mum and dad are not formal dining folks. However, I did notice they had a bistro alternative: The Euro, located right next door. 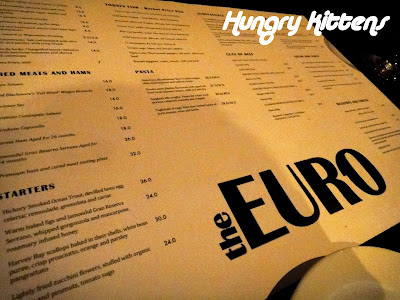 We got there around 7pm on Saturday. It wasn't too busy when we were seated but gradually, the tables got filled.

My first feeling was that of dread, but not the sort that most people would experience. I noticed Dim Lighting (aka enemy to all food photographers, especially those with n00b equipment like myself) and knew everything I snapped would look disgusting. 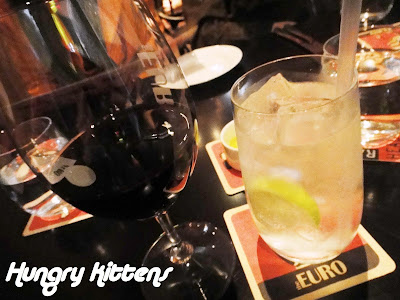 Glass of red and gin and tonic

Not one to beat around the bush, we ordered some alcohol to get the party started. Mum had a glass of red that I didn't try because I don't like red. I had the best gin and tonic of my life. Good stuff. And credit to me for making it last nearly 2 hours. 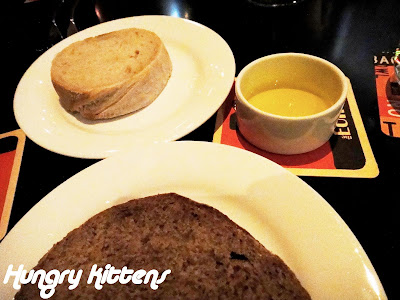 Some complimentary bread was passed out to start with. There was a white and rye variety. I tried a bit of both. Dad didn't like the texture because it was too dense. He liked the crust though. I LOVED the texture. It reminded me of a special type of steamed bun although I'm not sure if that's what they were trying to achieve. We dipped the bread in olive oil and although I'm far from being an olive oil connoisseur, I have to say this stuff was dope. 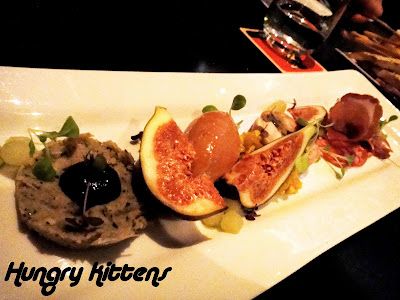 Starter plate (for contents see below)

For starters, I ordered a share plate, which was one of the daily specials. Because I knew it wouldn't be on their website, I asked for the contents to be written down:
This plate of goodies was served with some toasted brioche, grilled sourdough and grissini sticks.

You can now see why I needed all that to write down. 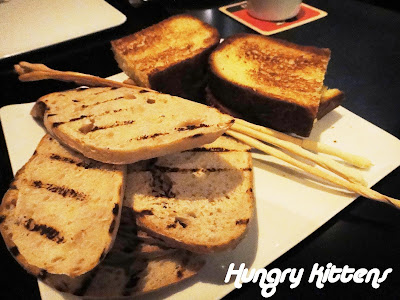 Short interlude now - I will mention here that my mum completely embarrassed me with an outburst of 'my daughter is a food blogger' to our waiter, plus 'give him your card!' to me.

Yes, I do have a Hungry Kittens business card, but I got them printed because I'm a self-obsessed wanker who likes to waste money, not so that I could give them out like candy at fancy restaurants!

Anyway, my story aside, the duck rillette and liver parfait... don't ask me what they are but they get thumbs up from me. That plus grissini sticks = instant, awesome beer snack. Overall, it was a fun little share plate and good way to start our meal. 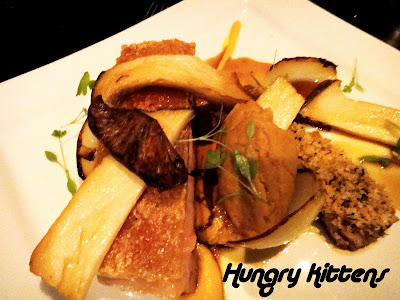 For mains, I chose the pork. The crackling was a bit on the chewy side and also too salty. The meat itself was very tender though. I thought the almond skordalia was basically a nut butter and I'm not sure how it fit in. Whilst caramelized onion petals might sound basic, they were sweet and wonderful. 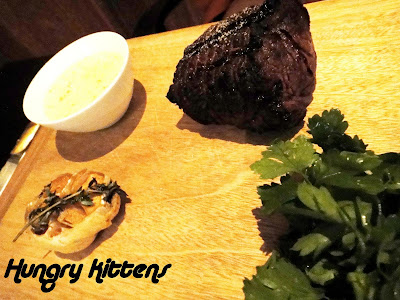 Mum ordered an eye fillet. I have no idea how to judge this - I did try some but she ordered 'well done' and I can't eat well done meat. It's like eating old boots?! I didn't hear any complaints from here though and she commented that the exterior was crunchy, in a complimentary way. The bernaise sauce was good and extra good when sprinkled with the accompanying fresh baby herbs. Dad had her roast garlic, cos he likes that kinda stuff. And well, he liked it. 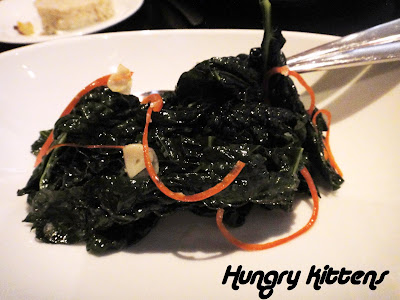 We were advised to order a side to go with the eye fillet because it didn't come with any sides of its own. I got all excited about ordering the cavelo nero because I had it as part of breakfast at Pearl Cafe. It was great then so I thought it'd be cool to show my parents a new, unusual vegetable. My mum had one taste and said it was 'mi shi' which is a leafy vegetable they have all the time in Shanghai. As soon as she said it, I knew it was true! Funny how different names and big price tags make you confused about what you're eating. I imagine that to be true about a lot of things. The cavelo nero itself was a bit salty. 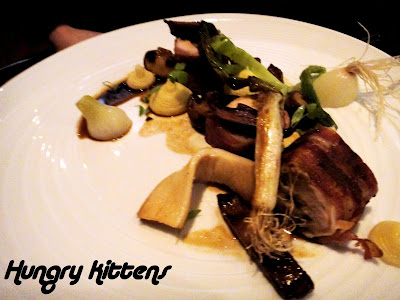 Dad's main was the spatchcock. He was originally going to order the rabbit but mum made a comment about how he shouldn't be eating rabbit on her birthday (she was born in the year of the Rabbit) so he got bullied out of it. The spatchcock was very delicately rolled up. I had a small portion. Quite good.

My parents were getting too full for dessert but in my mind, it's not called eating out unless dessert is part of it. We compromised and got one dessert to share between three. 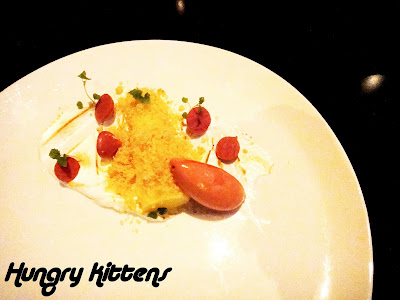 After deliberating between the chocolate mousse and lemon tart, dad put his foot down for lemon tart. I'm so glad he did. I'll be honest and say the serving size was smaller than I expected (probably because I'm a pig) but this dessert was really good. It was the perfect way to end the meal because the tangy lemon cleansed our palattes nicely. It wasn't my idea of a lemon tart... more of a 'deconstructed' lemon tart, comprising of a few artsy fartsy smears on the plate. But even though I'm not keen on that fancy crap, it was a bloody good tasting smear! The microscopic berry meringues were fabulous. 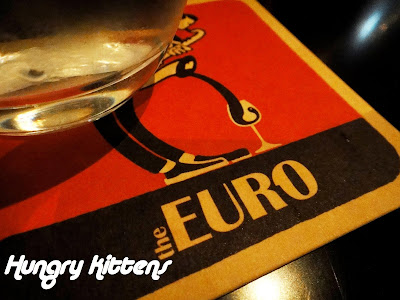 The Euro was a good overall experience. Our waiter was fantastic: friendly, knowledgeable and efficient. The food was good on average. What impressed me the most was the olive oil, duck pastes and lemon tart. I would have liked brighter lighting, not just for photography reasons but because I'm getting old and my eyesight isn't perfecto. I remember dad commenting at one stage that he couldn't tell what colour the veggies are. Lighting should suit those who eat with their eyes as well as their mouths :).
Labels: CBD and Surroundings, Dining Out, Informal Dining, Modern Australian