Funny Funny for our Reunion Dinner 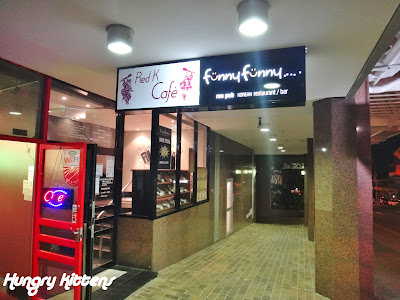 It's a sign of us all growing older, or should I say (more positively), 'growing up' that many of my closest and oldest friends have moved out of Brisbane and are living all over the East coast of Australia. Howl, one of my favorite people on this planet, made a trip back to Brisbane last weekend. Needless to say, I had it marked in my diary months in advance as something to look forward to. 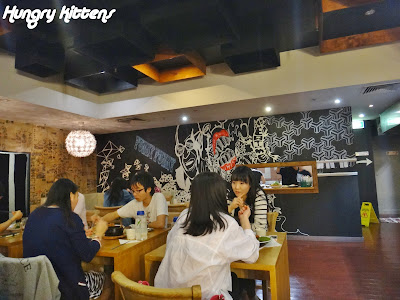 Whenever Howl's in town, he pulls together the 'old crew' (from our uni, class 2010) and the night tends to end up boozy with a lot of karaoke. That's not relevant to my food blog but they started with dinner on this occasion, which gave me something to write about.


I've never been to Funny Funny before but I've attempted it once. That is to say, we walked there but for whatever reason, it was closed (Tuesday night, I think) so we had to find an alternative. 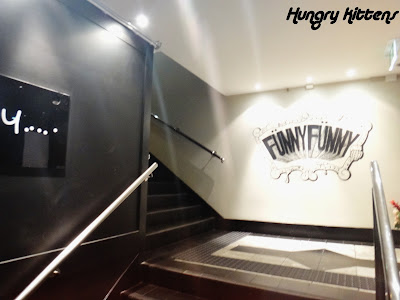 Let's get this out of the way first: I love the name 'Funny Funny'. I don't know what they're intending to convey with the name of the restaurant but it makes me smile just hearing it and I think that's great for any kind of social venue.

Funny Funny is a Korean restaurant located on the corner of George and Mary Street. You walk up some stairs and there's a larger-than-expected floor space set up with tables and churning with people eating and drinking. Our group took up a large table somewhere near the middle.

The group ordered a couple of dishes to share. I arrived a wee bit late so I didn't quite catch the proper Korean names of the food we ate. I bet even if I'd heard at the time, I would have forgotten by now. Nearly all the Korean dish names on here are found by me using Google, so they're probably inaccurate. I wasn't feeling peckish at the time so I went around collecting comments from my friends. 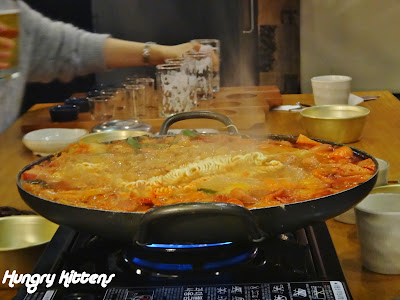 Korean hotpot with noodles, baked beans and ham in a chili soup

The first dish was a bubbling hotpot of what Howl described as 'instant noodles with baked beans'. Apparently it also contained ham and lots of chili. It was a huge serve and sat there bubbling away for ages. This is exactly the kind of food I like on a cold winter's day. Never mind that it's spring now. 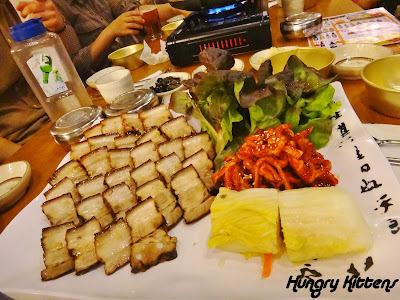 The next plates contained cold meat. Bill (who I'll call our 'host' because he did most of the interacting with the waiters) mentioned the word bossam, which I think means steamed pork belly. He said the meat was very tender and that the "fat is soft". He suggested it was better together with the radish. He then confused the hell out of me by saying "the pork feet smells too strong". Weren't we eating pork belly? 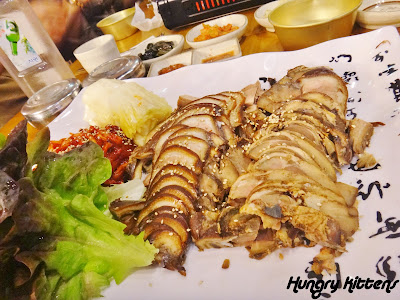 I now realize there were 2 different plates of meat. Well, now you know what the Korean thought of the pork feet too. Both plates were served with sauce and lettuce etc so I think you can make little lettuce wraps. That's what I do at Korean BBQs anyway. 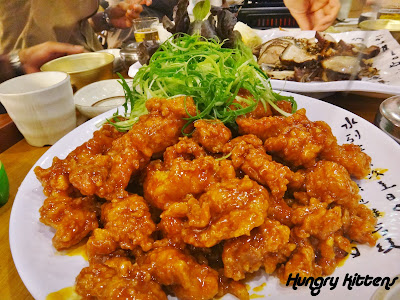 When the next dish was brought to our table, I found it impossible to resist so I had a taste myself. It was crispy, spicy chicken and it tasted amazing. I liken it to meat candy with a sweet chili flavor. Mind you, this being a Korean restaurant it was a sweet CHILI flavor not the weak kind of SWEET chili you get out of a Subway sauce bottle.

I asked Howl what he thought of the food. He replied "I'm no food critic!" so I clarified that neither was I and that words like "good" and "tasty" were allowed. He thought about it then replied "scrumptuous!" before adding "That's a word they use for food, right?" I laughed so hard my stomach hurt.

It should be apparent by now, from the silliness of this blog post, that we were drinking and eating in equal amounts. I was downing whatever they were handing to me. With some afterthought, I realized it wasn't like anything I'd tasted before. I thought it was beer but it didn't taste like beer. Bill informed me that I was drinking a cocktail of beer, sake, soju and whiskey. Oh. 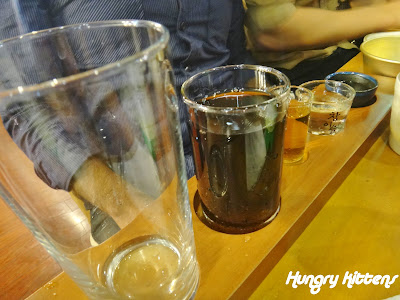 Another friend of ours, Indran, ordered something. To call it 'a drink' would be a vast understatement because he had a line of shot glasses on a platter. Apparently it was also along the lines of whiskey, soju, sake and beer. That stuff's not all that bad mixed together! You have my word on that.

I know that Funny Funny is not a gourmet restaurant but in my mind, it does everything it's supposed to. It was a (can't think of a better word) fun place for old friends to gather, eat and drink. The staff were efficient and friendly. We scored a jug of cocktail for free (it was delicious). I liked the vibe of the place - it was upbeat and cheerful. It's also in a great spot to eat/drink before heading out so that's always a bonus.