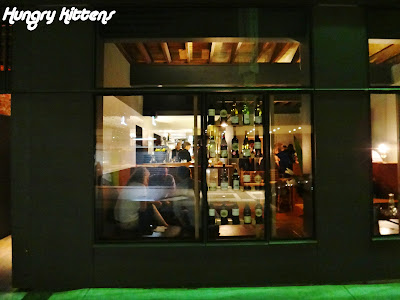 I've slowly restarted ticking through my list of Brisbane restaurants (2 weekends in Sydney set me back a bit). Survey Co was a pretty obvious pick for the weekend. I was in the mood for a more straight forward meal (as opposed to kooky and innovative) and it's also a convenient walking distance alway. Oh, and it's also a bar. 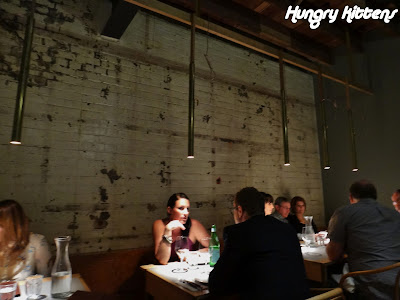 I think it was on Thursday, or maybe Friday of last week when I made a proclaimation that I was going to drink less at restaurants because it was affecting a) my taste buds and b) my photography skills.


On the defensive, I 'needed' a drink after rushing to Brisbane after work on Friday because when you think about it, it's practically a week's worth of stress and sobriety that needs prompt ammendment. Also, while it's definitely getting hotter during the day, the nights still have a bit of bite so I needed a drink to keep me warm for the road (before I get any drink driving complaints, I don't mean that literally. We were WALKING).

Survey Co is part of Brisbane's attempt to establish a laneway set-up, perhaps inspired by that of Melbourne. Look, it's fair enough and I'm all for jazzing up the dining vibe in Brissie but we just physically don't have that many laneways around the city. It's going to be a difficult game of catch up, that's for sure. 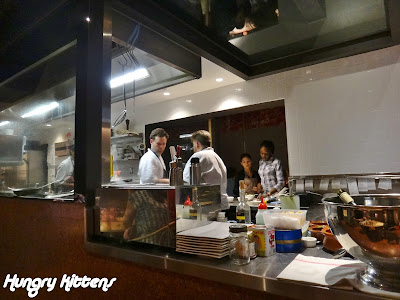 We found Survey Co without the need for much exploration. It's a long restaurant with the bar extending from the front an an open kitchen at the back. We had a nice table at the back of the restaurant. 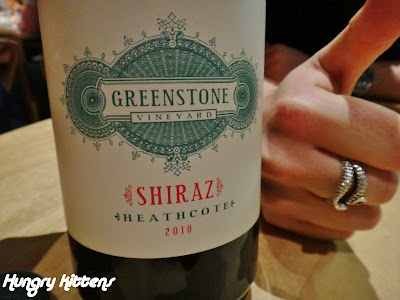 I tried to compromise my new found desire to maintain optimal taste yet still have alcohol by suggesting we stick to wine. Wine and food is supposed to go together, right? Something about bringing out flavors and synergy and whatever. We took a very non-gastronomic approach to choosing our wine. One had Marc's name on it (I am aware that the word 'Marc' doesn't appear on the label but he does own a sirname too so all premise of anonymity on this blog are about to go out the door) and that was our pick for the evening. 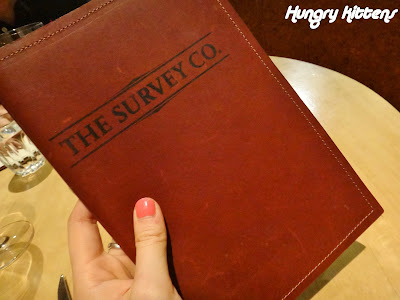 I had a basic outline of what I wanted to try at Survey Co. This is getting rarer for me because most of the time I want someone else to make all the decisions. This time, I had 2 of the starters in mind, Marc and I chose a main each and I knew which desssert I wanted too.

The starters are like little canapes, which isn't something a lot of restaurants offer on their menus. Zesty versions (usually given for free) could be claimed as amuse bouche. Put three on a plate and it could be called tapas. At Survey Co, you can order them invidually so I picked the 2 that most interested me. 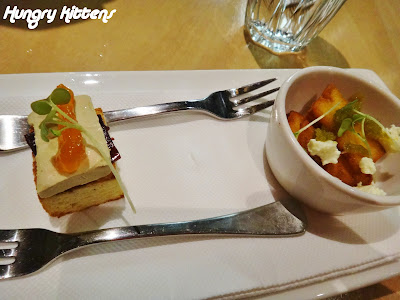 The item on the left is the foie gras on toast

The foie gras was something I really wanted to try despite knowing that Marc wouldn't like the idea or taste of it. He had tried some duck liver pate at Deer Duck Bistro and wasn't a lover of that either. I launched into a huge lecture about how duck liver pate is to foie gras what sushi fish roe is to caviar. Regardless of my educational attempts his feelings towards this remained the same: unimpressed. I loved it though. Foie gras is something I find difficult to liken to anything else... creamy and almost pungent, but very decadent. It's too rich and intense to have on its own but perfect for crispy toast croutons. 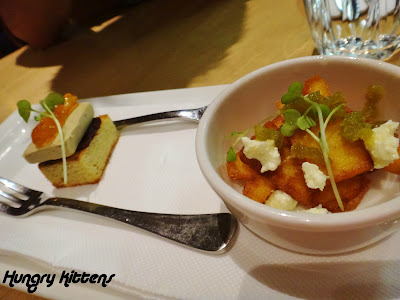 Almost the same photo as above but this time emphasizing the corn flake, goat's cheese and jalapeno

We joked that the 'corn flakes' were definitely not of the Kellog's variety (after a couple of glasses of red, this kind of humour seems valid). They weren't anything like what I'd expected, even though I hadn't formed a clear idea of what I was expecting. The corn flakes were a bit like spicy, corn-flavored, thin-cut chips (as in, chunky chips not packet crisps). Marc liked this one and claimed he could eat a whole bowl of this himself. I've seen him eat. I believe him. 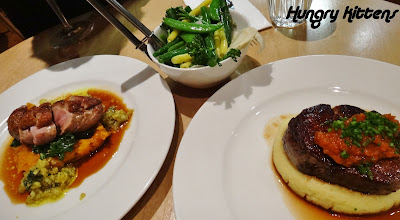 For our mains, we both wanted the duck and I decided on the eye fillet as the other main because it sounded the most 'classic' and I've been eating a lot of (for want of a better word) 'weird' food so I was craving something more simple and easy to compare against other restaurants. 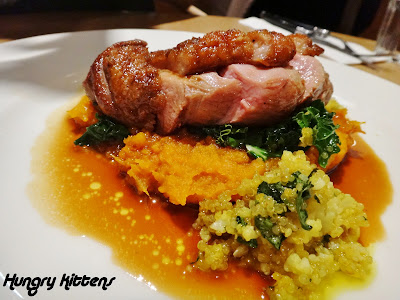 The duck was decent. It had a nice flavor, which was in fact it a very strong, gamey flavor that might almost put some people off. But I dig it. Marc didn't think it was anything special and made some strange comment about how he was used to Asian-style duck and because this wasn't anything like that, he almost couldn't tell it was duck. I disagree. It was very obviously duck to me and I don't know where he pulled that comment out because we've had duck at many Western-style restaurants before. After some thought, analysis and tweaking of his words, I believe he was trying to say that it was lacking in something and that something might be crunchiness. This duck missed the crispy skin that makes duck dishes so good. What a shame. I did like the kumera mash but my relationship with sweet potato and pumpkin go beyond that of 'just friends' so I admit to carrying bias. 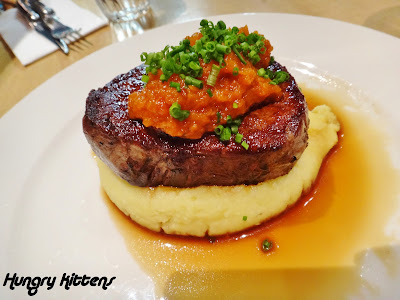 The steak looked gorgeous sitting on the plate. It was nothing fancy or adorned or sliced and abstractly scattered on the plate with sauce squiggles. It was just a solid piece of meat on a bed of mashed potatos. Uninventive as that may be, it's still an image that gets my stomach juices going without fail, every time. We asked for medium-rare and unfortunately, the steak was definitely over that mark. It was also a tad dry. 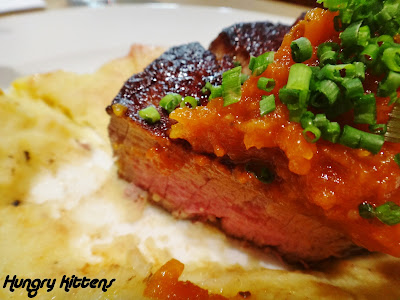 Marc agreed with me that the meat was good but overcooked and that there wasn't anything special about it. He liked the salsa on top. I thought the mash was yum. It wasn't silky smooth to the point of being potato-flavored butter (I'm not sure I like that in a mash anyway) but it tasted good. 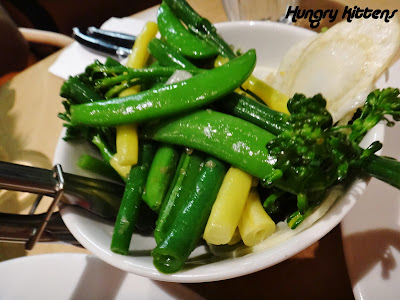 Side of seasonal vegetables

We also had a plate of veggies on the side. I feel self-conscious eating anything green out in public because once that gets stuck in braces, there's no hiding it. I asked Marc for his feedback and he looked blank. I expect he was thinking something along the lines of "it's vegetables...??? What is there to say?" I was forced to try some to form my own judgement. They were definitely very fresh and cooked al dente. Can that even be used as a term to describe vegetables, or is it a pasta-only thing? In any case, the veggies were 'just' past the barrier of being raw so they were very crunchy. 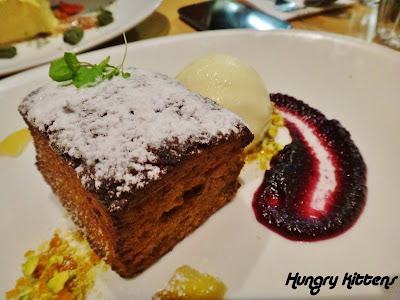 For our dessert, the one I had my eyes on was the carrot cake made with purple carrots. Fans of this blog know I am carrot cake obsessed. It so happens that Marc is similar in that regard so where we differ in our opinions of foie gras, we make up for in our mutual love for carrot cake. I used to think "why order that at restaurants when you can make it yourself" and then I tried the carrot cake dessert at Deer Duck Bistro and it totally changed my perception. 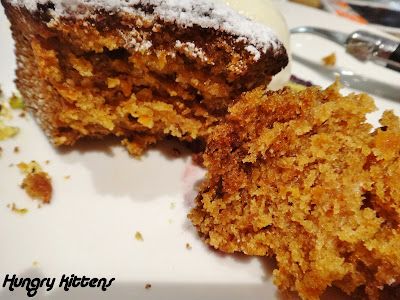 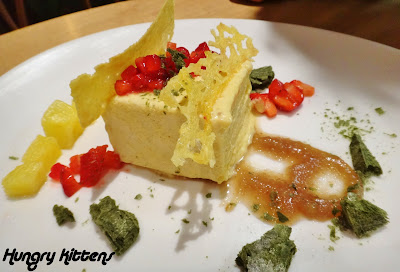 We were going to stick with the one dessert but the waitress made the special of the day sound so good we decided to throw all 'too full to walk' caution to the wind and order that as well. It was a white chocolate and chestnut parfait and I much preferred this to the carrot cake dessert, although Marc didn't like it that much. We did a plate swap part way through. 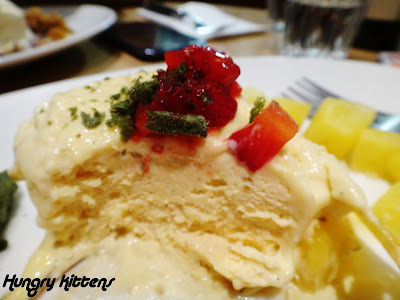 I couldn't really detect the chestnut and the parfait was a shade too sweet but the fruit was nice and it was still a delicious dessert. 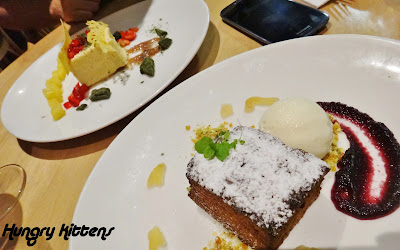 I found Survey Co to be a 'solid' restaurant offering in Brisbane. I imagine it to be a reliable go-to for regular, after work meals. The menu is comforting in its lack of ambition. I'm sorry if that sounds like a bad thing but I mean it in a good way. Foam squiggles and dehydrated smears are fun to try but for actual eating, give me steak on mash anyday. The food itself was decent but there were minor flaws here and there and nothing really stood out to us. The service was efficient but not as warm as some of the other places that I've visited recently.