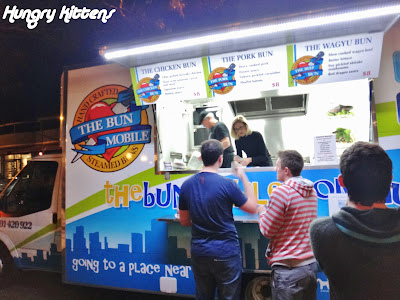 Ah, The Bun Mobile. There exists, in the foodie blogosphere, things that become a must-do. Describe it however you like: buzz, hype, frenzy. I can't even remember when or how I first learnt about The Bun Mobile but I know it's been sitting on Urbanspoon's 'Talk of the Town' list for weeks, if not months. If something's that 'talked' about, I just HAVE to try it. Coincidentally, I was on a plane to Thailand and flicking through the in-flight entertainment when I got my introduction to Eat St. I don't know if anyone outside of the states knows of this but I watched one episode and fell in love. The episode I watched featured some of the hottest food destinations in The States at the moment, and I don't mean fine dining. The show is all about street food and I got a taste (not literally, unfortunately) of what's available out there in the form of grilled cheese vans, gourmet tacos served out of a backyard caravan and giant shnitzels cooked by a white homie rapper. Man, that show was awesome. It also planted the idea of food vans deep in my mind, which made me even more keen to try The Bun Mobile.

The problem is, The Bun Mobile is well, mobile. It's in a new spot every day. I'd imagine that living in Brisbane, this might not be a huge issue. I reside in Toowoomba and am only graced with the honor of eating in Brisbane on weekends. The Bun Mobile doesn't run on Sundays. The time frame in which myself and The Bun Mobile have to meet is clearly limited. One minor plus was the fact that it occasionally stops in West End, which is where I stay in Brisbane. Would there ever be a day that I would be in town, with no other plans, and The Bun Mobile also present? It all came down to fate. 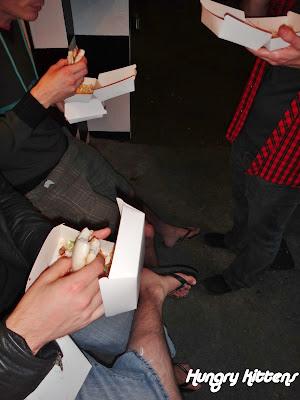 I thought I'd be able to catch it one Friday evening when it was parked outside the Cultural Centre in South Bank. I had a flight to catch that night but whatever... this seemed like too good of an opportunity to miss. I finished work in Toowoomba and headed off in the general direction of Brisbane, but the closer I got, the more I realized I wasn't going to make it. It was a case of bun + missed flight vs no bun + not being an idiot. I chose not to be an idiot on that occasion and headed to the airport instead. 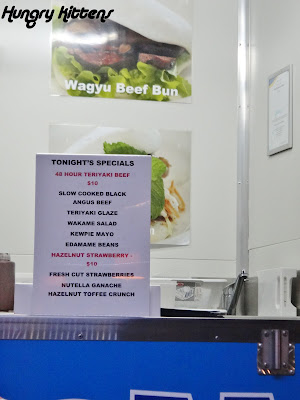 Finally, after continuously refreshing the location calendar, I found a potential time to visit last weekend. We had plans to go out drinking Saturday night but hey, drinking and food are 2 separate activities and are in fact synergistic. We had predrinks at Marcs and started getting peckish so it was the perfect time to head over to The Bun Mobile for a bit of fuel. His housemate Garthritis and friend Knobles came along for the fun of it.

We spotted The Bun Mobile parked at a relatively quiet spot off the intersection of Vulture Street and Boundary Street. It was located outside The End Bar, which I'd never heard of before but I might try it out some time. There wasn't a ginormous crowd surrounding the van but in the time we were there (as we ordered, waited and ate), there seemed to be a continuous supply of customers. 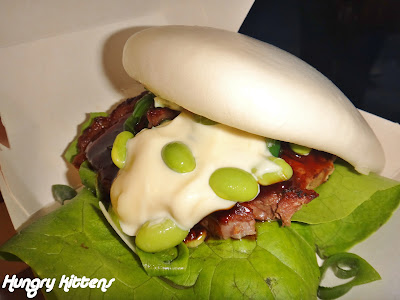 The Bun Mobile offers 3 types of buns on their regular menu, plus a savory and a sweet special of the day. The regulars are a chicken bun, a wagyu bun and a pork bun. On the night that we went the special was a slow-cooked black angus. The dessert special had strawberries, nutella and toffee but none of us were in the mood for anything sweet. 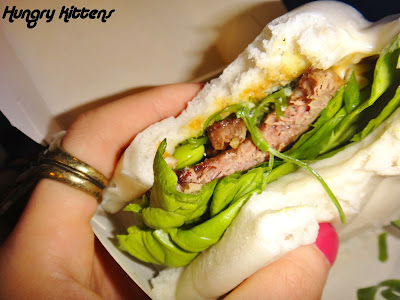 Marc and I chose the angus special and chicken buns. The angus was extremely juicy tender. It went really well with the kewpie mayonnaise. The bun itself (which is universal for each menu item) is soft, light and slightly sweet. It ressembles an Asian-style steamed bun. Nina asked me later if it was like a char siu bun and I responded that it was sort of like that but with a smooth exterior. In any case, it went well with the angus filling. 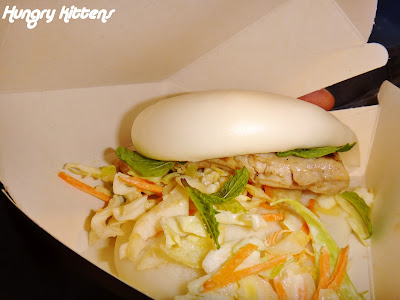 The chicken bun was also tasty but definitely the loser of our 2 choices. It was good but nothing outstanding. It's one of those things that you can eat at any takeaway store and you'd be happy with, but after months of trying to get to The Bun Mobile, I wanted MORE. If I'd just ordered chicken and everyone else was eating beef, I'd have suffered severe food envy. 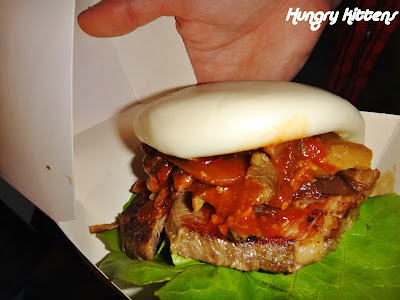 Garthritis selected the wagyu and chicken for himself. I won't go on about the chicken again because I've just spend a paragraph hurting its feelings. Garthritis commented that they were both pretty good but he preferred the wagyu. He got so excited over the wagyu he accidentally sauced his pants. 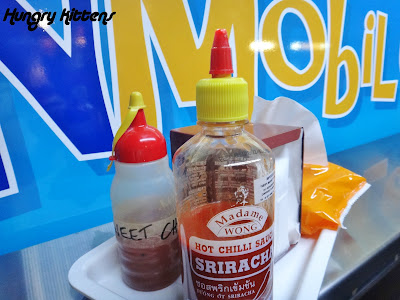 On that topic, I'll go a bit into the eating practicalities of these buns. Considering that you are buying from a mobile lendor, there's nowhere to sit and eat. The buns are provided in little paper boxes and most people I observed stood around eating. I overheard someone say that you can take them into The End Bar to eat. Don't quote me on that because we didn't try it. We just sat outside and ate. It wasn't too difficult to manage. I'm the messiest eater on the planet. Even when I'm eating at home I need a tissue box next to me because I'll end up with sauce all over my face, fingers, nose, anywhere. Even when I'm not eating anything saucy. I don't know how it happens it just happens. I did alright with the buns I ate and only had to grab ONE tissue. For me that's practically unheard of. FYI The Bun Mobile has a little station of sauces, tissues and even wet wipes so if you're concerned about making a mess, don't be.

Unless you're Garthritis. There is nothing The Bun Mobile can offer for sauced pants. 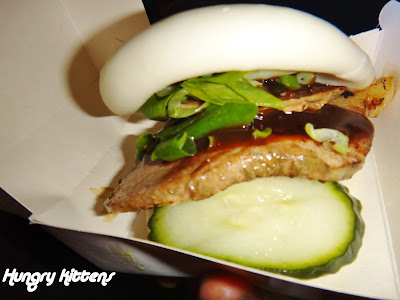 Moving on now... Knobles started with just the one order of wagyu beef. His feedback was also largely in the positives. It was so positive that he ended up ordering another bun, this time the pork bun. I can now say I've completed the set and imaged all buns! Oh, except the dessert bun but I will ignore that. Knobles liked the pork bun and commented that it was "kind of like a pork bun". Wait a second... it IS a pork bun. He meant it was a bit like an Asian pork bun but sandwhiching the filling rather than enclosing it. He said the wagyu was better though. If I ever manage to find The Bun Mobile again, I know that's what I'll be ordering after those rave reviews. Marc and I had the angus beef, which was also great so maybe they really know how to work beef.

Let's talk about serving size for a moment. To me, the buns are not huge but they definitely look filling. Then again, we had 3 men in our group and 2 of them ordered 2 buns each. Marc didn't technically just eat the one either. I'm a 'small' eater so I take samples and he gets free reign on the rest. He might have had 1.5 buns and was considering ordering another. Maybe the buns are inadequately filling on their own? Maybe my friends were just really hungry? OR, maybe the buns are so delicious that one isn't enough! Interpret it how you will. I'm just giving you the facts. 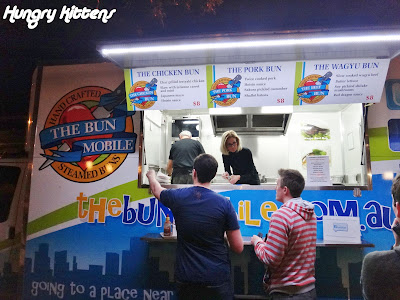 Was it worth it finally getting to The Bun Mobile? I got asked that a few times. Nina wanted to know because she's also been painstakingly (and failing) to track it down. Marc asked me because I've been posting him photos of the location calendar to keep an eye on. I've been making a big deal about this (let's not forget nearly missing a flight in favor of bun-eating). Was it worth it? Nina wanted me to specifically mention that it's a nuisance to try and find them. I would say that if the van is parked near you, it's definitely worth visiting. The buns are YUMMY. It's not just hype. It's so easy for a place to get hyped up and killed by its own hype. I think these guys are onto a good thing. Now that I've fulfilled my curiosity, I'm not going to go chasing the van through unknown suburbs just to get another taste. However, if I'm hungry and it's conveniently near me, I'd have no hesitation in stopping by for a bun. Especially the wagyu.

ETA: Nina has since been able to find The Bun Mobile, ordered the wagyu, pork and dessert special of the day and enjoyed all three. Her review can be found here.