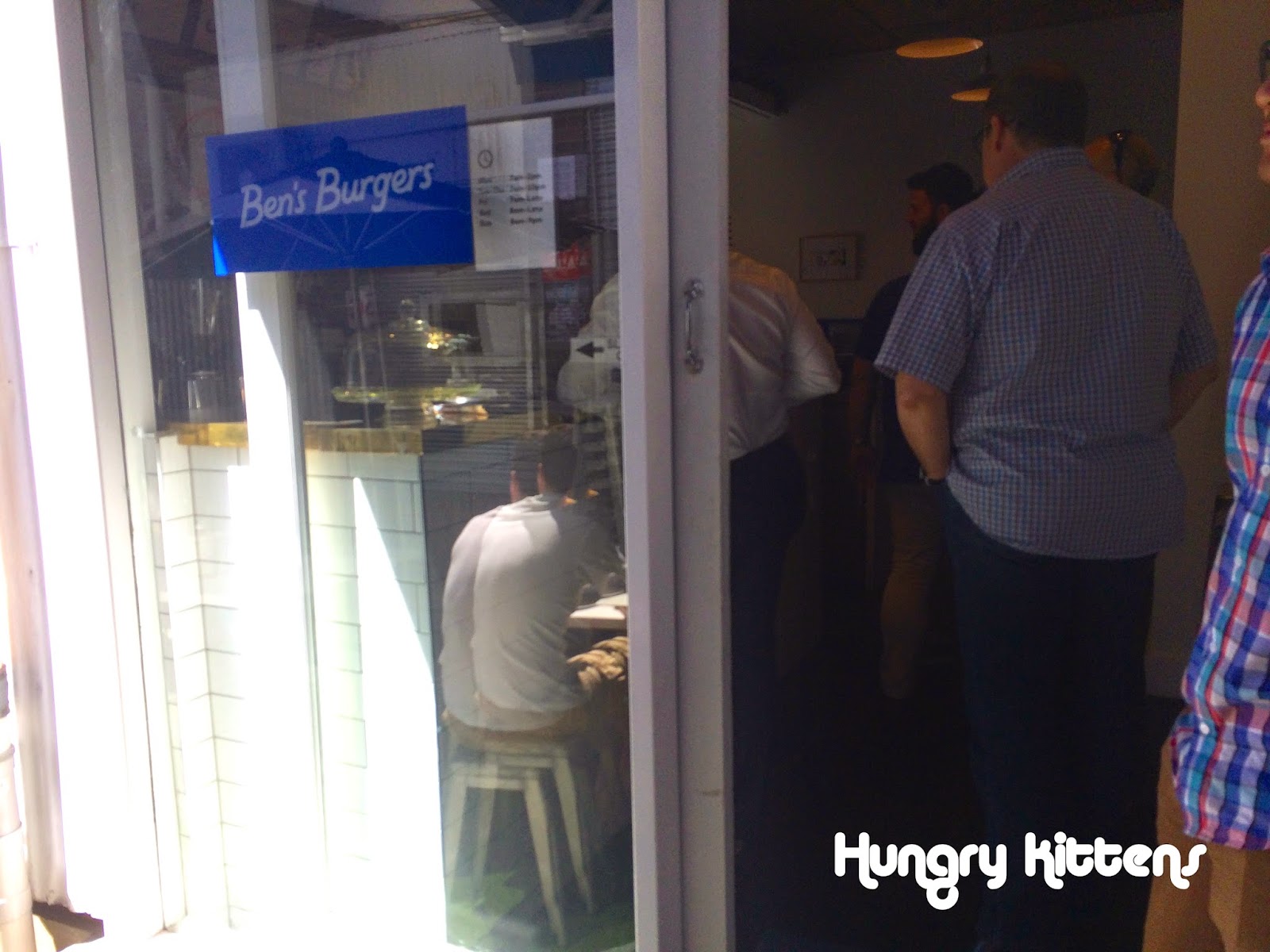 I first heard about Ben's Burgers from a friend, who's the friend of some friends who may be the owners. They may or may not be called Ben. I didn't ask. Why is Ben such a good food-producing name? Ben and Jerry's works. Ben's Burgers sounded just as promising. 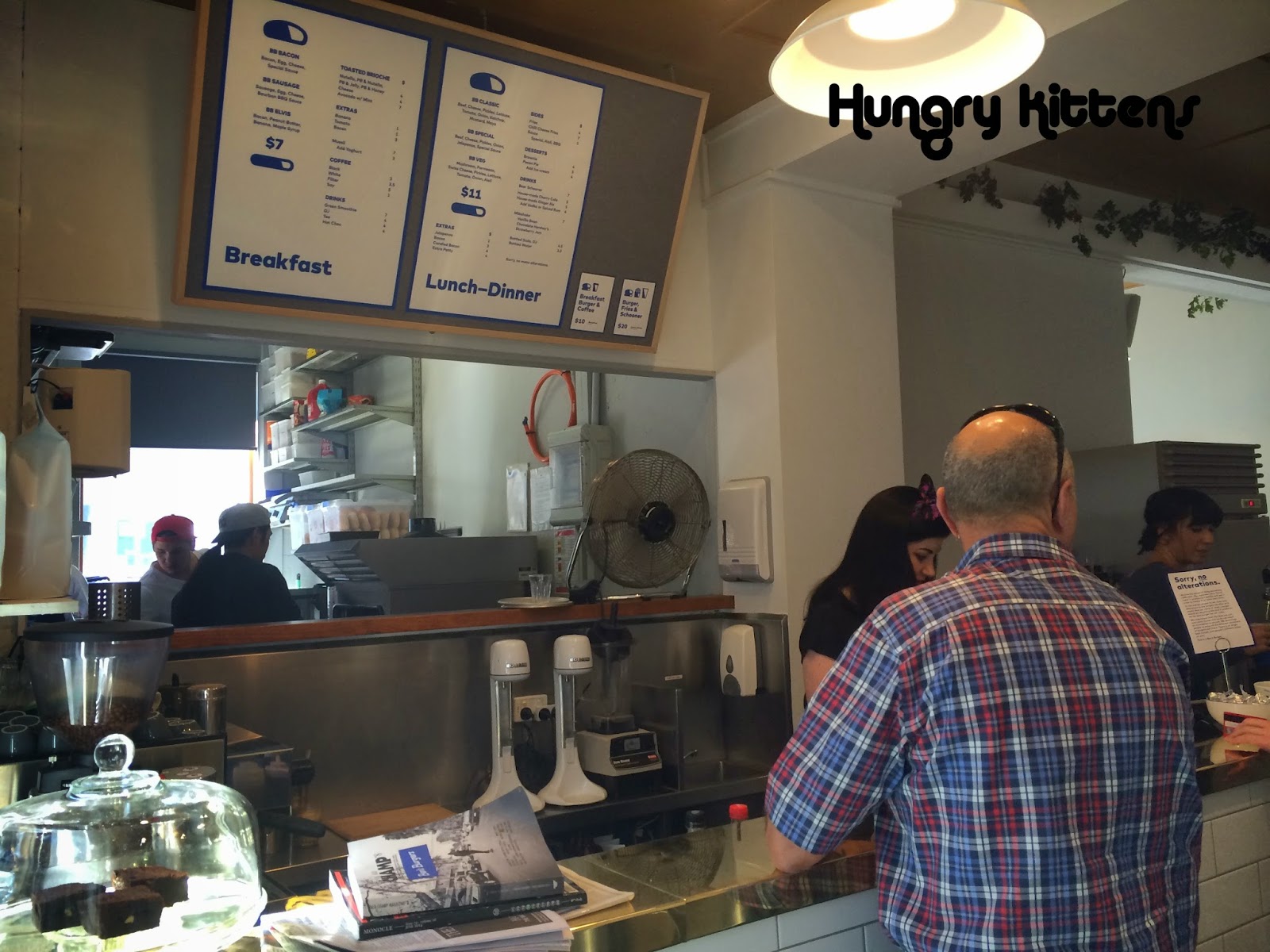 Jenny tried Ben's Burgers a while ago close to when it first opened and she gave me generally positive feedback with some criticism about the saltiness of the burgers. After going through a couple weeks of healthy eating, my body/taste buds suffered a massive backlash and all I've been craving recently is burgers, chips and cake. Who am I to reject these natural urges? 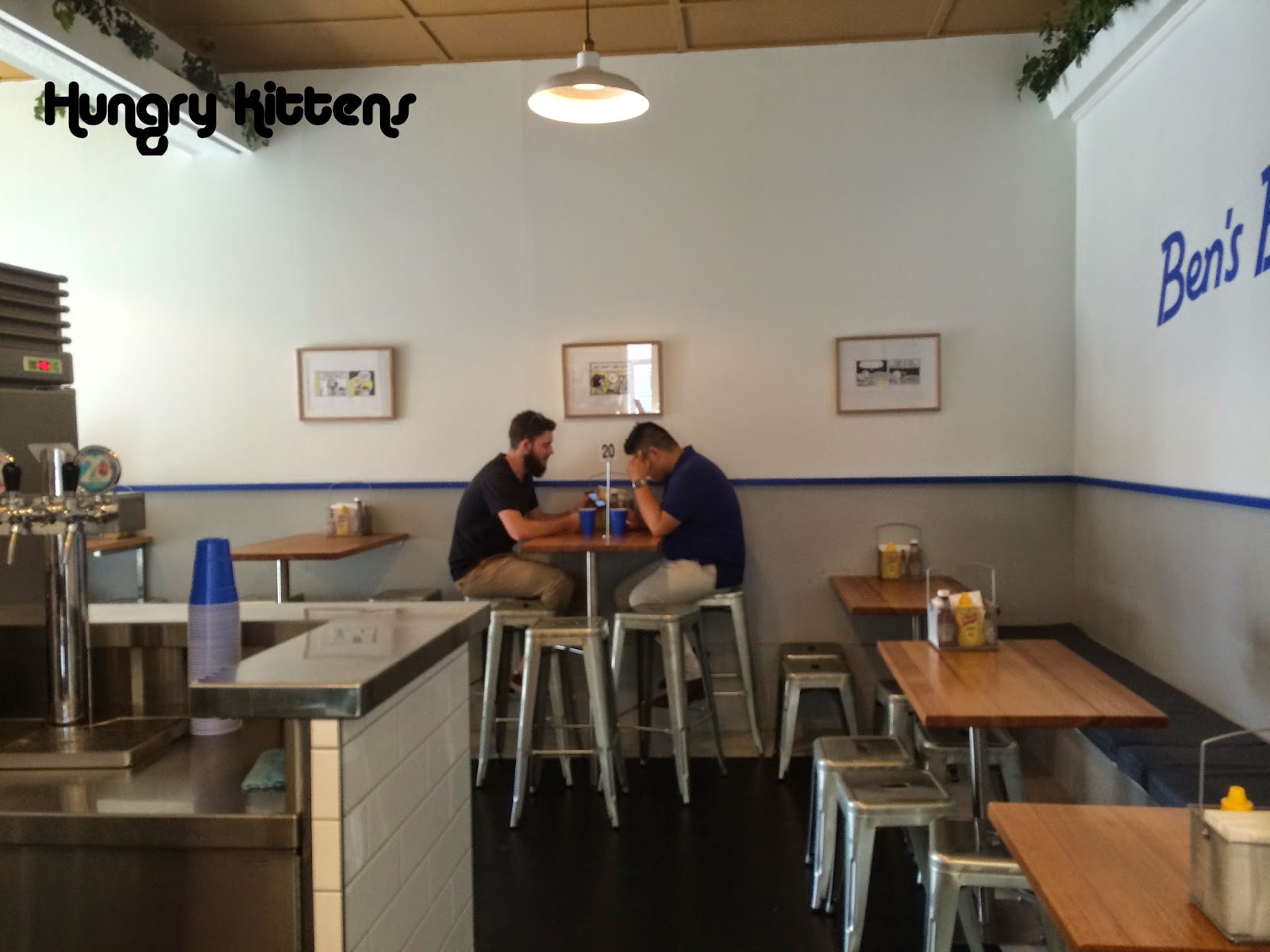 I made a lunch date with Hien because he lives in the Valley nowadays and having been to Ben's before, knew exactly where it was. I feel like the Valley and New Farm highlights just how unhip I am because everyone else seems to be cruising around in fashion attire whilst I slop past in t-shirt, shorts and thongs. This is why I could never move to somewhere like Sydney or Melbourne. I'd never be able to leave the house!

Ben's Burgers is located in a trendy laneway that is so cute and put-together, it's like it's straight out of a design magazine. There's fake turf across the ground, artful graffiti, mismatched furniture and an array of small businesses. We spied boutique stores selling insanely priced hand-made jewellery that look like pebbles, hair salons that I'd be too scared to even walk into, and of course Ben's itself, thankfully right at the entrance of the alley.

I was briefly confused about the two components to the Ben's Burgers building. I thought the open window was a coffee shop but apparently, that's the kitchen. I realize now that my brain told me it was a cafe because that's where Flamingo Cafe used to be. In any case, don't try ordering things from there. Instead, enter the building a bit further down and you'll find a menu across the back wall and some indoor seating booths. Hien and I ordered, paid, and set up outside to enjoy the sunshine.

The menu at Ben's Burgers is unfussy and comprises of 3 burgers, some sides and American-style drinks. We selected a good variety of things to try. Hien was a great sport because we managed to order without any overlap, and that means there's more for me to photograph. I never openly complain if I'm eating out with a friend, after all, the joy is in the catch-up, but my pet hate is people ordering the exact same thing as me. Shhh... I know that sounds bitchy. 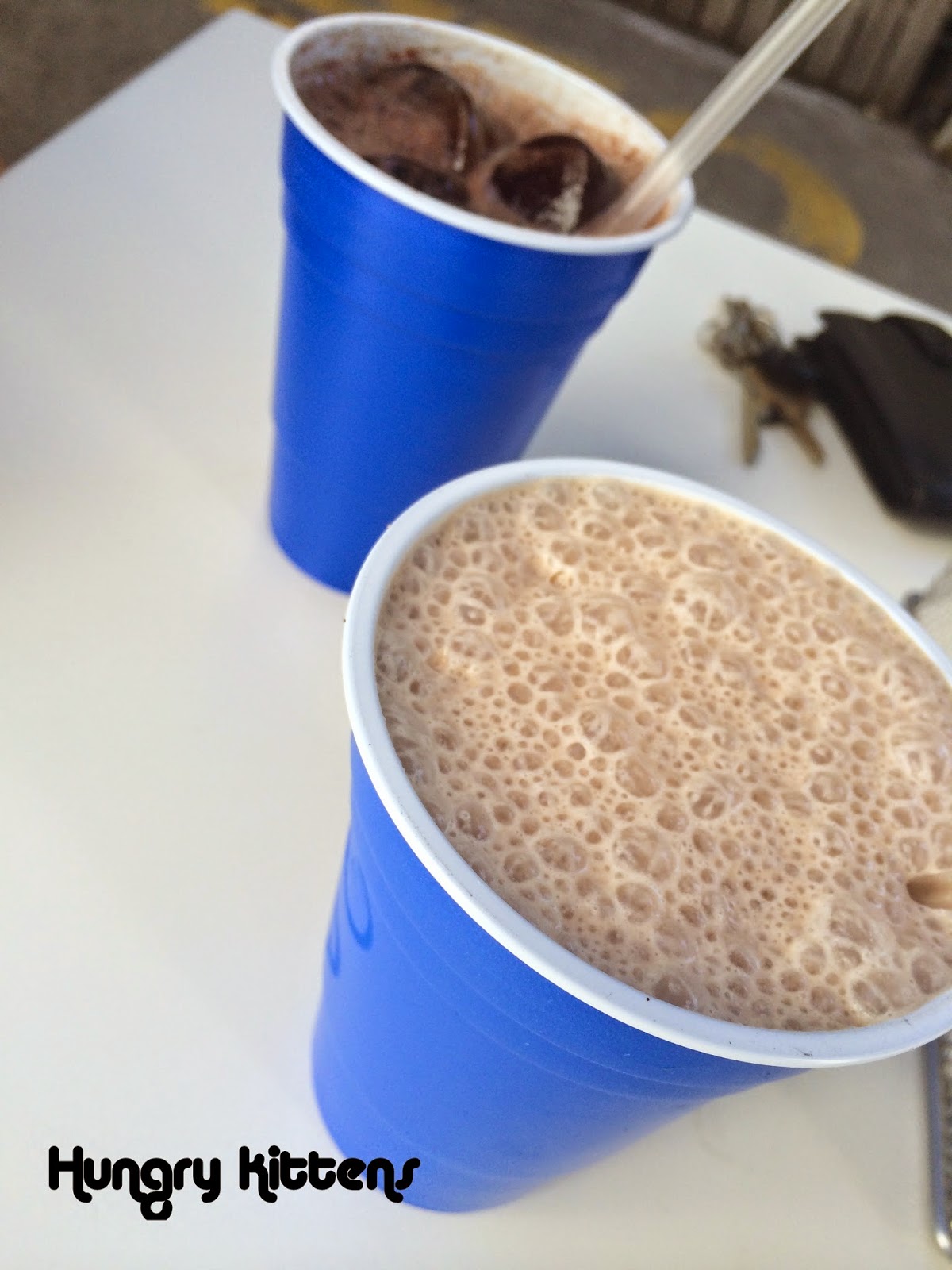 Our drinks arrived first. I'm rarely in the mood for a milkshake and they can even make me feel nauseous. This Hershey's chocolate milkshake was my idea of a perfect milkshake. It wasn't too think or stodgy but had just the right degree of bubbly creaminess. The flavour was very chocolatey but didn't taste too fake or sweet. I slurped up the whole lot in one hit and had none left by the time our burgers arrived. Hien ordered the cherry cola and I tried some but I can't say I enjoyed it. That's just a personal thing though. 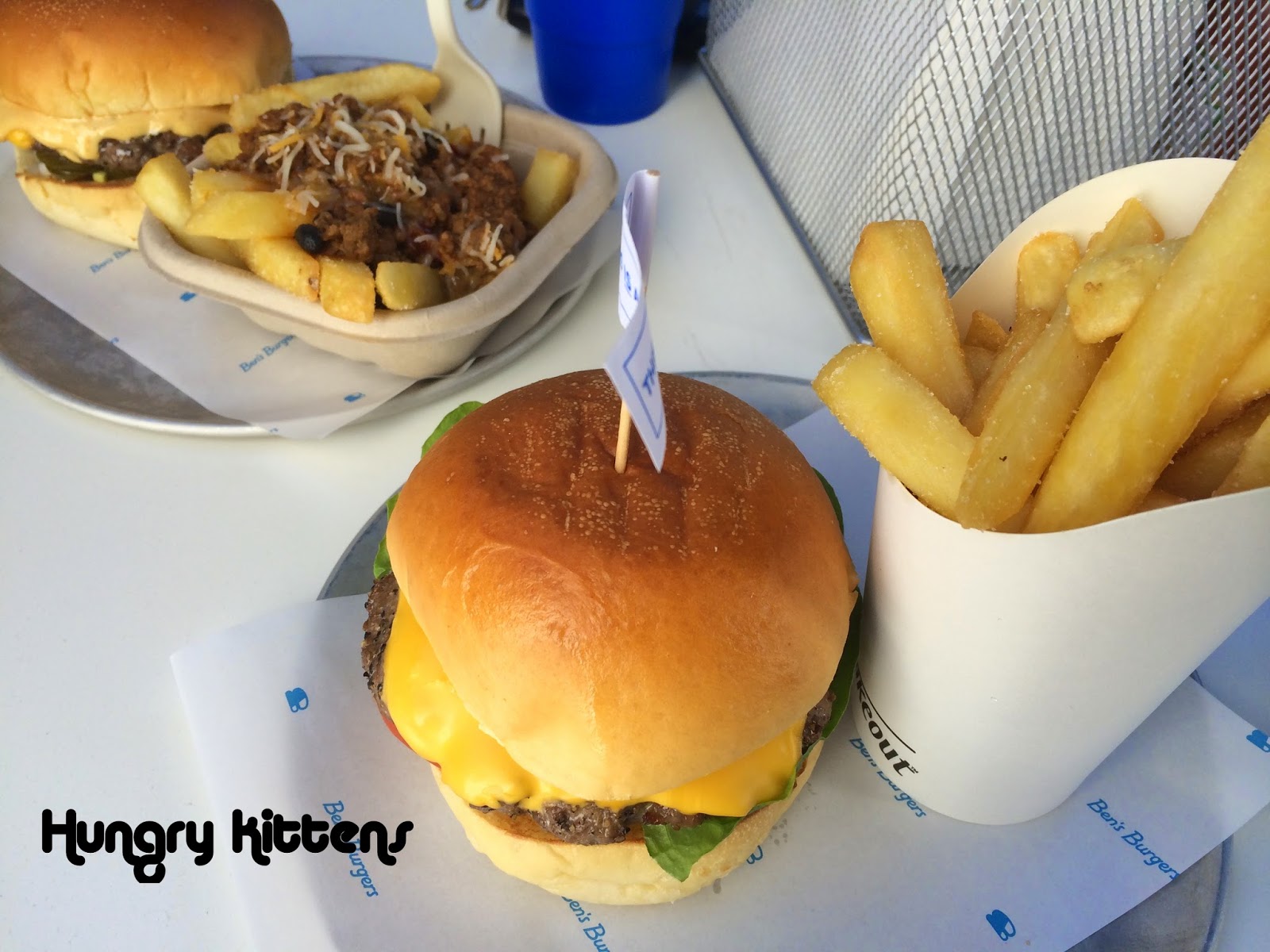 My first thought about the burgers is they look so... ADORABLE! There are burgers in the world that appeal because they are fat and loaded with sloppy, saucy, fattening ingredients. Then, there are burgers that appeal because they look refined and elegant as though each layer is hand-selected from a locally sourced, highly acclaimed organic farm. Ben's Burgers fit under neither of those categories. They were palm-sized rounded balls of vibrant and glossy deliciousness. I was brought to mind those Japanese plastic models of food that are meant to replicate real dishes. These burgers were so colourful, round, neat and 'rendered' that they looked fake. And I mean that in the most delicious way possible. 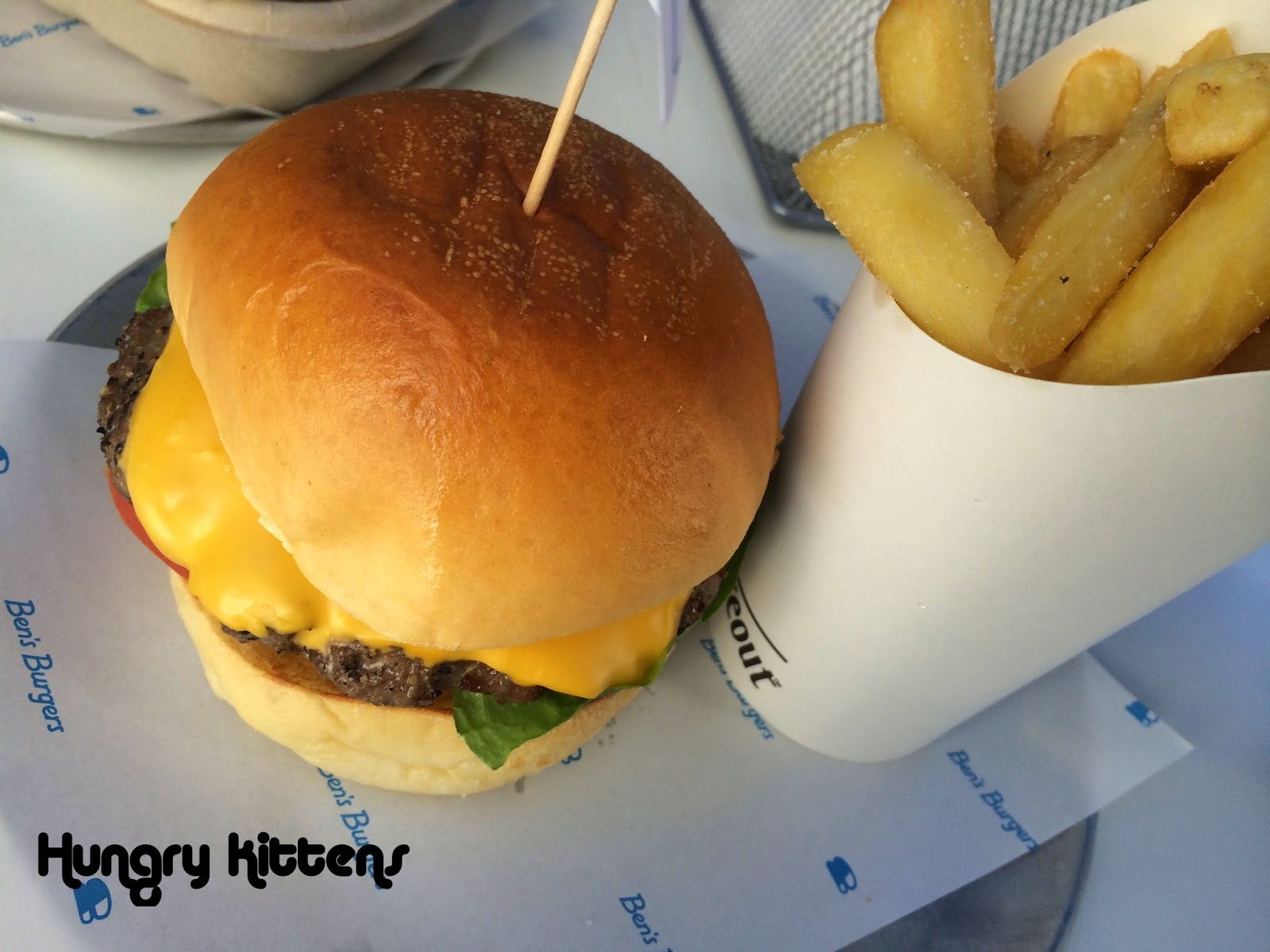 The burgers are served on brioche buns. Normally that would put me off because so often, the brioche used in savoury food is to sweet or too buttery. These were just soft and mildly sweet without any hint of oiliness. 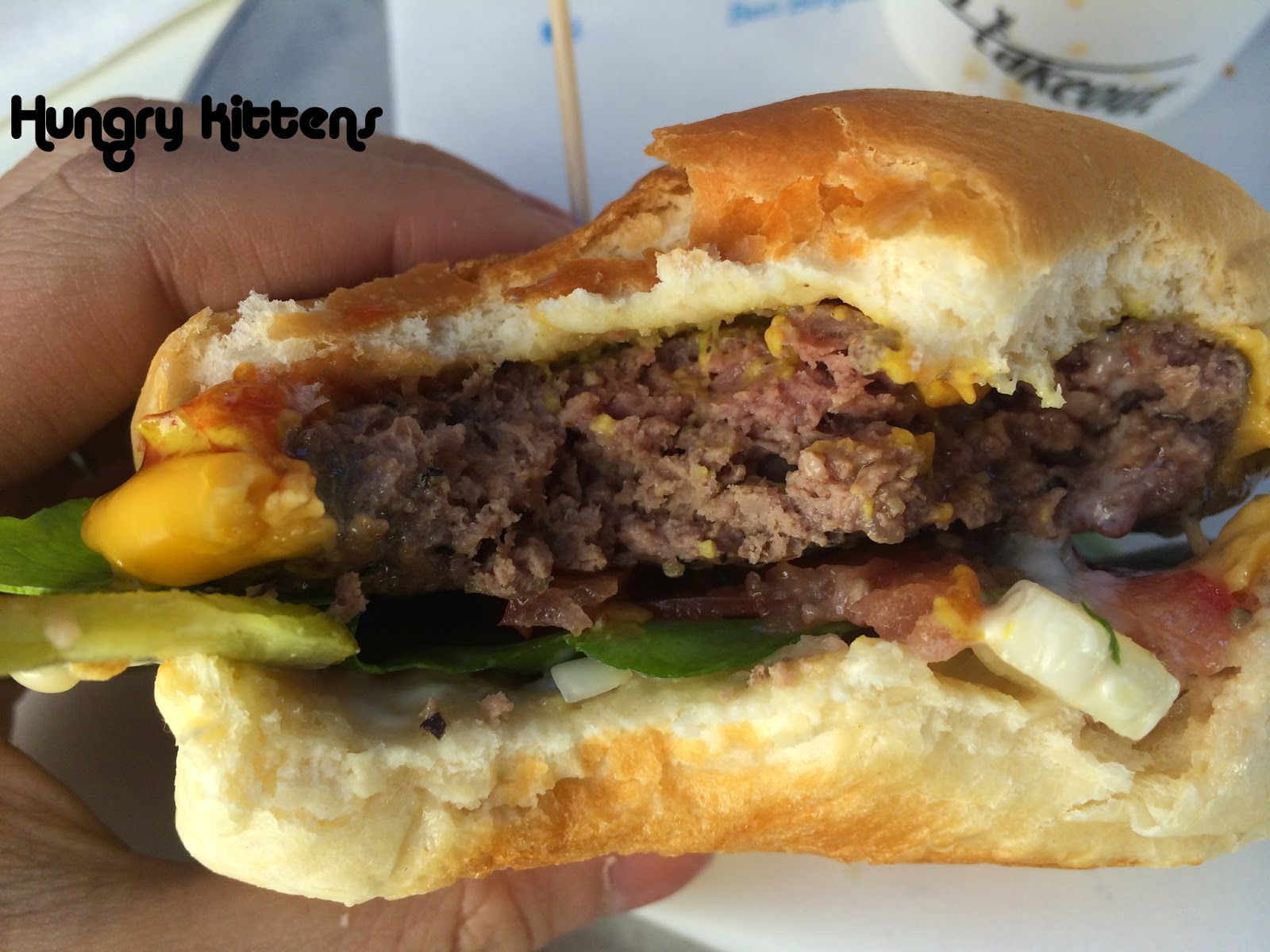 Impressed with how tidy this burger is

The patties were the best part; thick, juicy and perfectly cooked with a just-pink interior. I thought they looked simple at first glance but probably had more to them than meets the eye. I found something that tasted curiously like szechuan peppercorn in my braces after this meal. Whatever they do with the beef, they do it well. 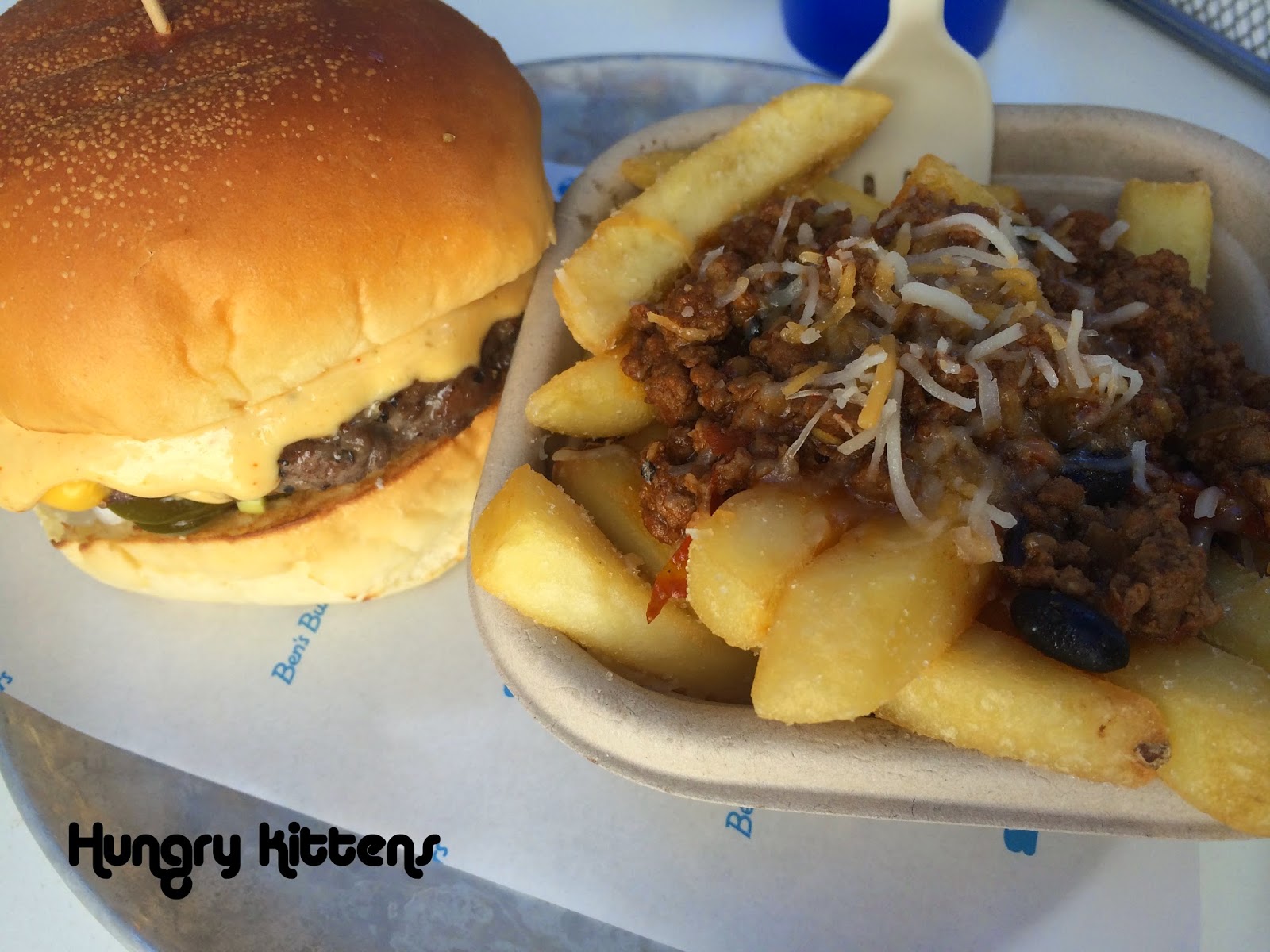 Hien's order was the BB Special, which is the spicier burger option on the menu. The third option, BB Veg is a vegetarian option with mushrooms. You can also beef up your burger (literally) with extra patties, candied bacon or jalepenos. Aside from that, there are no menu alterations allowed.

My burger was so delicious I finished it completely before I even started on the chips. When I got to them, they were sadly a bit disappointing. They were clearly freshly cooked because the insides were so hot. That's the good part. However, the exterior just didn't have the crunch factor that I need to enjoy chips. Furthermore, they were absolutely slathered in salt. I love, love, love salt to the point that if I didn't naturally have low blood pressure, my GP would have issued a severe health warning on me. I add salt to everything and I like things to be saltier than most. This was even too much for me. I could still just about eat the chips but I needed ketchup to balance it out and I was so bloody thirsty by the end. If only I hadn't been so greedy with my chocolate milkshake... 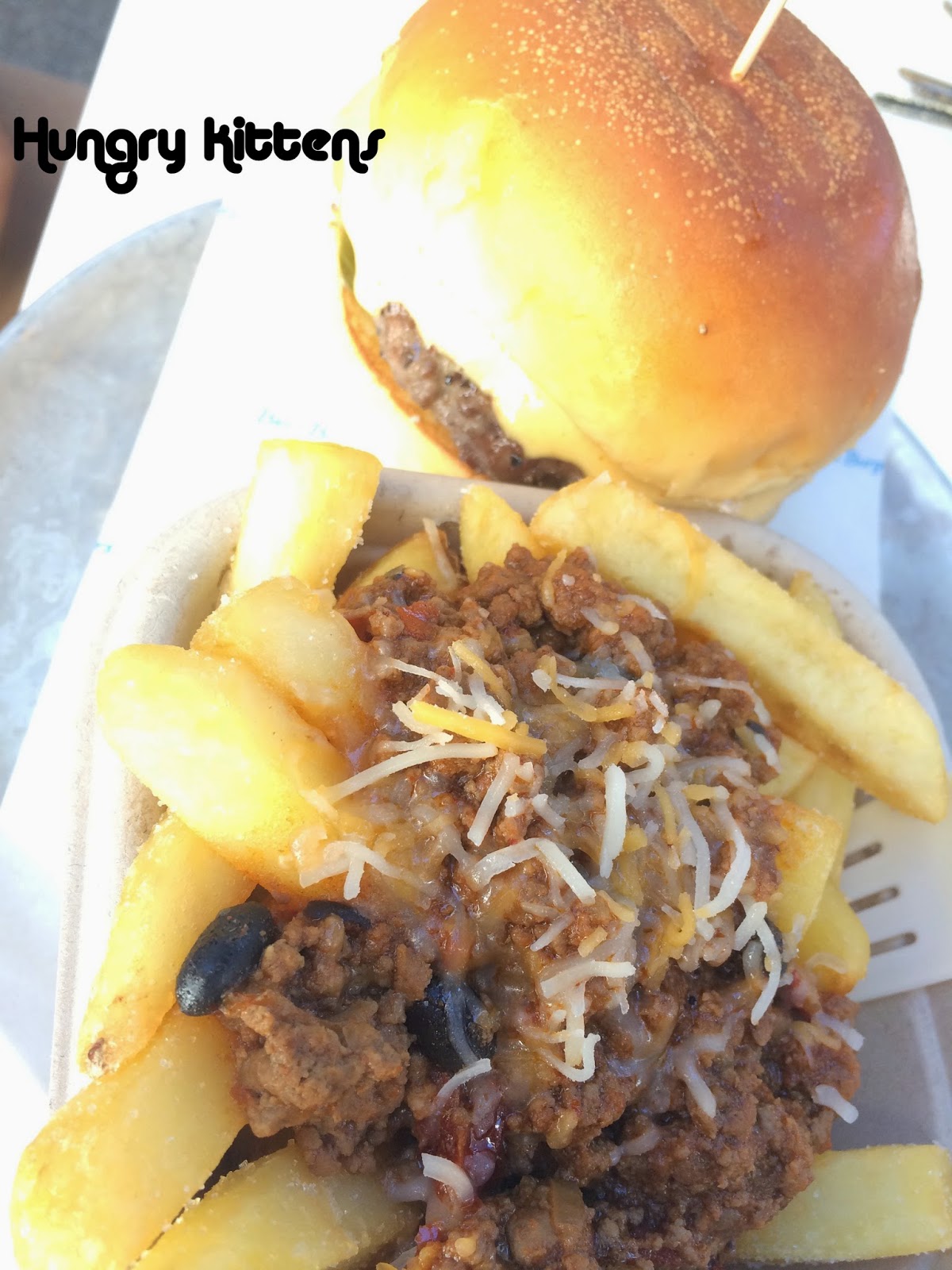 Hien's pick of side was the chili cheese fries. He really enjoyed these and I imagine they would have been better than the plain chips. Chili beef tends to make anything below it go soggy so it wouldn't have mattered that the chips weren't the crunchiest. I don't think his looked as salty as mine either.

In short, I loved my burger at Ben's Burgers. It wasn't too busy when we went there for lunch on a Thursday and the wait was what I call 'medium'. It wasn't fast food but it wasn't so long that we got impatient. I can imagine if it was busier and I had to wait longer than that, I would have gotten grouchy. The burgers are worth it though. They are basically cheeseburgers on steroids but pumped up to emphasize all the best features. Juicy real beef patties, flavoursome sauces, tangy pickles, melty cheese and soft sweet bread buns. A special mention goes out to the chocolate milkshake for being deliciously rich and decadent but not at all sickening.