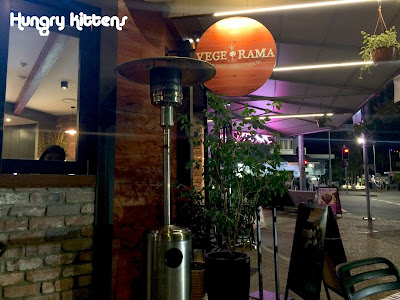 I'm not vegetarian by any means but I love the sound of certain vegetarian cuisine. I tried to become vegetarian for a month just so I would be forced to order more vegetarian options at restaurants. They often sound like the best dishes for me but I feel like I 'should' get a meat option or I'd be missing out. I always see Vege Rama when I'm driving around West End and I was curious to try it but there was no way Marc was ever going to come with me to a vegetarian restaurant. Even if I did manage to pressure him into it, he would have sulked and whined the entire time with variations of "where's the rest of the meal" comments. Luckily I have some girlfriends who are more open minded. 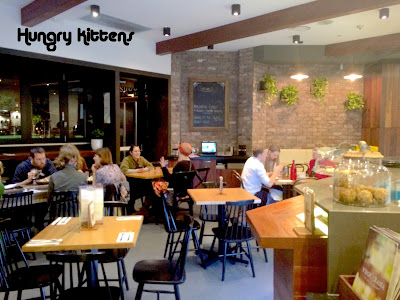 Blossom and I arranged a catch up over dinner last week. I got to Vege Rama a tad early and they were almost packed. At first I tried to squish up on the high seating at the window but then I spotted more spacious seating outside. The waitress was happy to relocate me and even turned on the heater. 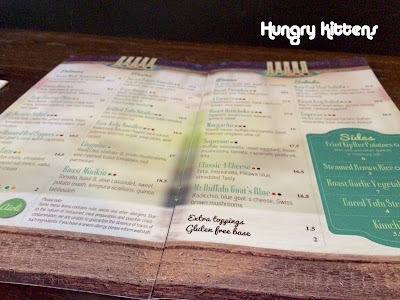 I was very impressed by the menu at Vege Rama. I was expecting a small selection of premade dishes that they scoops onto a plate for you (I think I had Govinda's on my mind) but there is a proper menu with entrees, mains and sides. What's even better is a comprehensive drinks menu with alcoholic beverages. I ordered a peach and lime mojito to start my night. 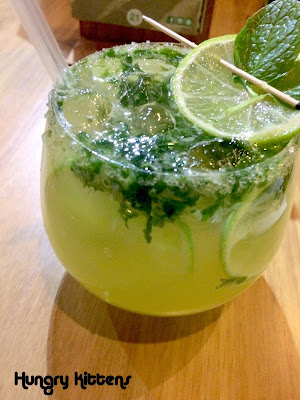 The mojito was fresh and pretty and not too sweet. I couldn't detect any peach flavour but lime was definitely present so it tasted like a regular mojito. Mojito is probably my go to classic cocktail so that wasn't a disappointing fact but I wonder if the other flavour variations taste like they're supposed to. 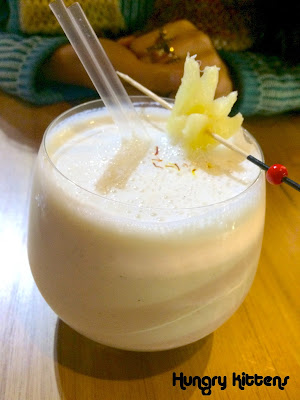 When Blossom arrived, she ordered a lassi. I've tried lassi before and enjoyed them but often find them too rich and sweet. Vege Rama offers several versions and Blossom chose the pineapple and saffron which had a lovely, almost savoury note thanks to the sea salt. It was very drinkable. We could detect pineapple and even a hint of a saffron but no cardamon.

For food, I had a salad in mind but was talked into ordering one of the specials of the day because it sounded so good. Blossom wanted the kelp noodles but it was unavailable so she ordered the linguine instead. 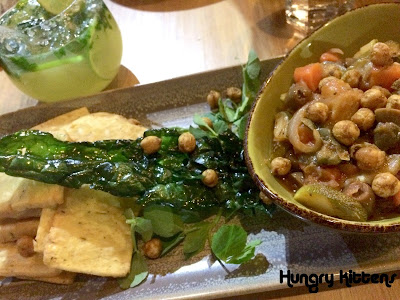 Our meals didn't take too long to arrive. I liked the look of my dish right away. The caponata was rich and saucy and there were lovely chickpea fritters to eat with it. The garnish of crispy kale not only looked striking but was tasty too. The caponata was so tasty. I could have just eaten a bowl of this stuff on its own. In fact, once I was too full for fritters, I kept going with the caponata. The fritters were good in that they tasted like mini chickpea bread pieces and weren't at all oily like fritters normally are. 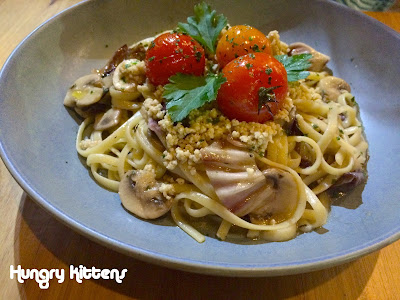 Blossom's linguine dish looked equally appetising with curly tendrils of pasta and cute cherry tomatoes to top. The flavour was good but Blossom commented that there wasn't as much variety of mushrooms as she had hope. 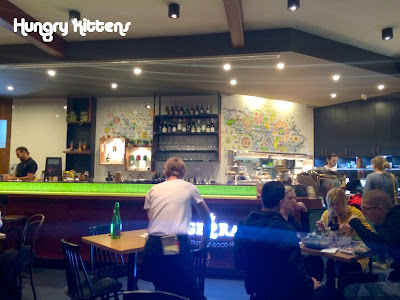 I'm really glad I got the chance to try Vege Rama. I think I'll be popping in a lot more often from now on. There was a great variety in the menu that would suit both a light meal or a more formal occasion. It's great that they serve alcohol, which might be enough to entice those who would normally need meat to enjoy a meal. Extra points are given to the friendly and thoughtful staff.