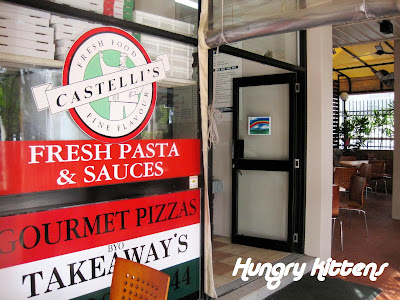 Not to be confused with Castelli's at Rosalie, which I've already reviewed. We've been curious about this Castelli's for a while. It just hasn't worked out... a few times we went, it was closed. Finally, a 'closed for renovation' sign was raised and we waited a bit more.

The other day, we wanted to get Indian food for lunch but every Indian restaurant we went to was closed during the day. When we drove past Castelli's, I noticed that it seemed open so we thought we may as well give them a go. 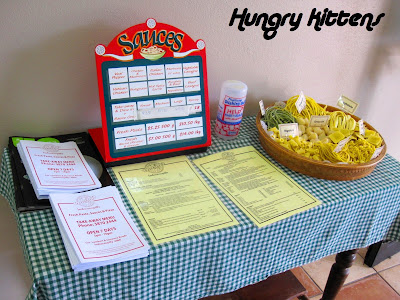 As their website suggests, Castelli's does fresh pasta and pizza. With the pasta, you can pretty much chose the sauce you want and combine it with your choice of pasta shape. There's a nifty little display to help you figure things out. 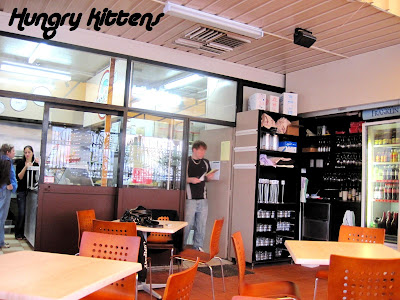 The restaurant has an outdoorsy courtyard-type dining area. We ordered at the cashier (a pizza and a pasta to share) and sat down. 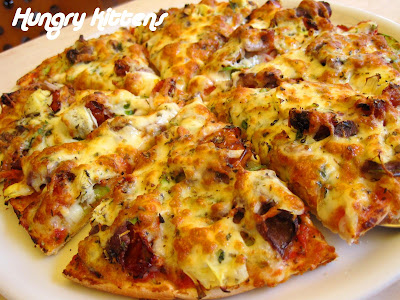 Food didn't take too long to come out. The pizza looked fantastic. We chose the lamb fillet pizza in 'medium', which was quite big. The topping was chockas full of lovely ingredients. 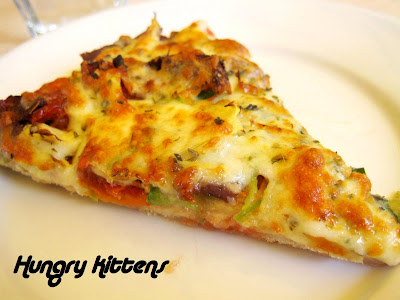 The base is decent - thin and crusty but not exceptional. My criticism is that the pizza lacked a bit of flavor. Just a bit more OMPH would have made it a more memorable pizza; as is, it's 'decent'. 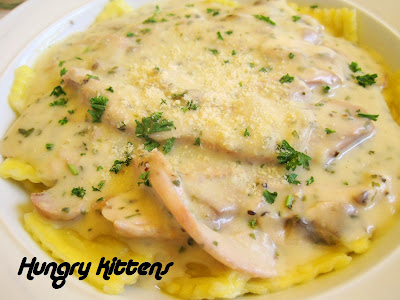 Ricotta ravioli with chicken and mushroom sauce - slices of chicken fillet sautéed with onion, garlic and fresh mushroom in a lemon pepper and parsley white sauce

The pasta definitely didn't look as impressive as the pizza. Because I sort of expected it to be bad (based on reviews I've heard), I chose a foolproof sauce: creamy chicken and mushroom. The strategy worked. Even though the sauce was average, it still tasted OK just because it's cream, it's mushroom and it's chicken... hard for it to taste bad. The ravioli themselves were not bad. Slightly overcooked but they would have benefited from a better sauce.

Service at Castelli's was really friendly. I'd probably go back for pizza but not the pasta.
Labels: Casual Dining, Dining Out, Italian Restaurants, Western Suburbs