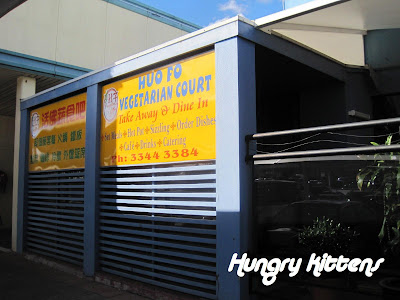 I've been slack. Uni has resumed and I'm finding less and less time for writing up blog posts. Nonetheless, the weekend is here and I wanted to put something up to let you all know I'm still active :). Sifting through my collection of food photos, I realize that there are so many things that I haven't blogged... I had quite a decision to make. 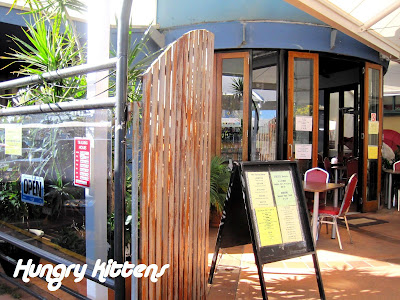 Since my previous post was all about how determined I was to go vegetarian for a month, I've decided to kick-start that era with an entry about a vegetarian restaurant. Keep in mind that there WILL be posts put up later on that will feature meat dishes and so on... they're all from BEFORE this vegetarian challenge and well, I gotta put them up sometime right? So please don't think I'm cheating. Besides, it gives you more variety to read about. After all, this isn't a vegetarian food blog - it's an EVERYTHING food blog. Just because I'm going vego for a while doesn't mean I'll force you along my journey.

I've been doing quite well with my personal challenge, although it's only been a couple of days so who knows. My strategy so far has been to rely on salads and veggie soup. Today, I wanted to kick things up a notch so I went to a vegetarian restaurant for lunch: Huo Fo. 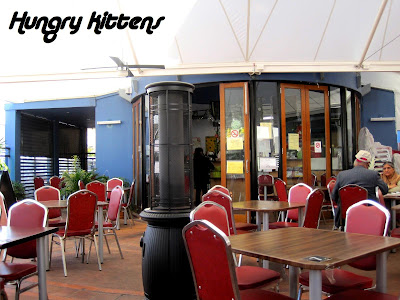 When Charlie and I got up, it was already noon so we didn't arrive at Sunnybank until nearly 2pm. Huo Fo was rather quiet with only 2 other tables of people. The restaurant has an outdoor courtyard feel though the roof is actually enclosed.

We were presented with menus and my first thought was confusion. I was reading dishes with the terms 'duck', 'beef' and 'lamb' and was stumped for a while thinking "did I really just walk into a vegetarian restaurant?"

Of course, when the brain cells started working again, I realized they were talking about imitation meat. Ahh...

I ordered a duck hotpot and Charlie ordered a hot and sour soup with the lamb and chicken rice meal. We also got some drinks. 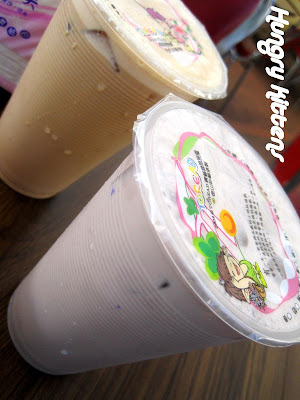 The bubble tea was good and cheaper than other places. I liked my taro milk tea because the taro flavor was quite strong but it wasn't overly sweet. The coffee milk tea was nice too. 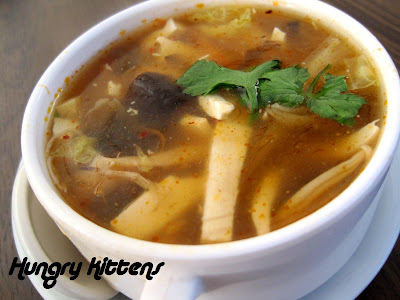 Charlie can be quite picky with certain food. With hot and sour soup, he has a very precise idea of what it should be like... and he felt that this one was lacking in vinegar. I tasted it and thought it was OK - very peppery (maybe a bit too peppery). 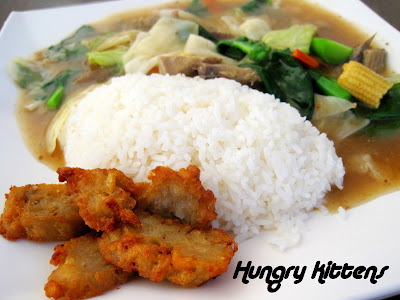 The lamb and chicken rice came next. It's basically a braised lamb and vegetable dish with some fried chicken nuggets (all imitation meat, of course) plus some rice. We both noticed that there was not nearly as many chicken nuggets as there was on the photo in the menu. All the same, the nuggets were quite tasty - not exactly like chicken meat but passable. The lamb on the other hand tasted nothing like lamb. It was a bit like meat from a tough mushroom. The flavors were alright though. 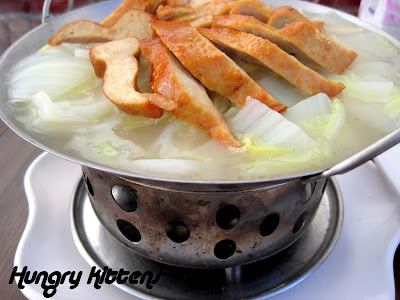 My hotpot was quite big - loads of wom bok and some imitation duck on top. I was happy that there was so much vegetable. One reason why I wanted to do the vegetarian thing was to force my intake of vegetables to increase. I was a bit apprehensive about trying the duck (was so sure I'd be disappointed) but Charlie gave it the thumbs up so I had a go. It tasted like Chinese smoked chicken. They did a decent job in imitating the texture of the meat and the skin. Got nothing on real duck meat of course but it's a satisfying attempt.

One last comment: I REALLY liked the rice. I'm not usually a rice person and I try to stay away because I just see it as pointless carbs. However, this rice was delicious! I could have had bowlfuls with nothing else. I'm not sure everyone will get what I'm trying to say but the degree of separation of granules was just perfect. Not too dry and hard; not too mushy and sticky.

Huo Fo Vegetarian Court gave me a lot of confidence with my ability to last on nothing but vegetables for a month. I've learnt that there's so much more than tofu and chickpeas - there are whole MENUS catering for vegetarian people. I mean, obviously, there should be because there are loads of vegetarians out there. I don't think I was ignorant on the matter before but when you restrict yourself to vegetarian options, it's very different to just understanding that other people are vegetarian. I am reeeeeaaaally appreciative of any variety.
Labels: Asian Restaurants, Casual Dining, Dining Out, Southern Suburbs, Vegetarian