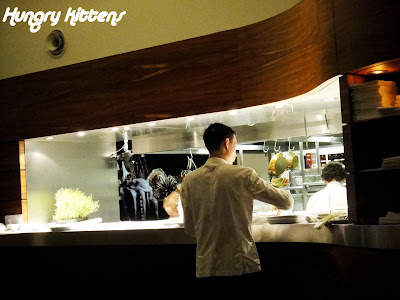 This past weekend I did the ridiculous. I flew down to Sydney on Saturday night to eat at Rockpool and flew back on Sunday. 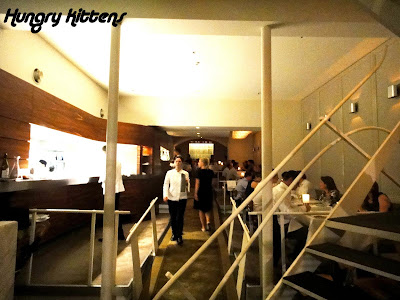 What wouldn't I do for a good feed?

So, when we finally got to Rockpool, we were told that despite our booking, we had to wait because they were running behind. I got a bit antsy but didn't have time to develop that into full-fledged annoyance because we didn't have to wait that long. 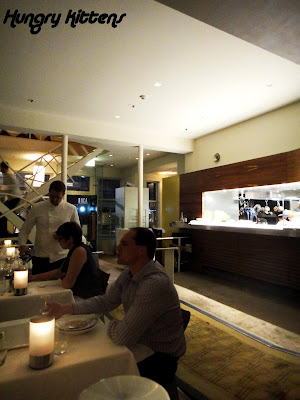 Rockpool seems like a smallish restaurant with most of the dining tables spanned across a long hall. 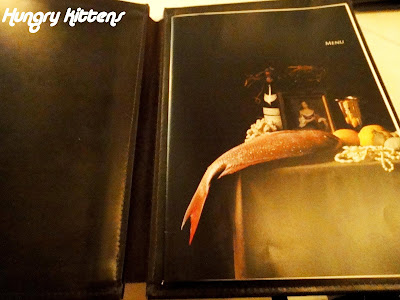 The menu involves either an 8 course degustation or a 4 course set meal. I say set meal but nothing is really set apart from the number of courses - you pick what you want for each course from a short list.

We went for the 4 course option. After being asked what we wanted to drink twice, I think they figured out that we needed some help. The wine specialist came along and gave us a hand. He did extremely well with the few confused request statements we came up with (e.g. 'like a dessert wine but not too sweet') and suggested a bottle. I was offered a taste and I was brainstorming all these ways I could lie to pretend I liked it in case I blanked out but ultimately, there was no need to. It was a fabulous wine and I loved it.

Because we had one wine to carry us through many courses involving everything from steak to lamb and seafood, we didn't expect much in the way of meal-matching. Luckily, the wine fared well with most of what we ate... I'd call it a robust white. I don't know the first thing about wine so I'm leaving the name of our bottle and if you're interested, you can Google the rest :). It was a 2004 Vinoptima from Gisborne in New Zealand. 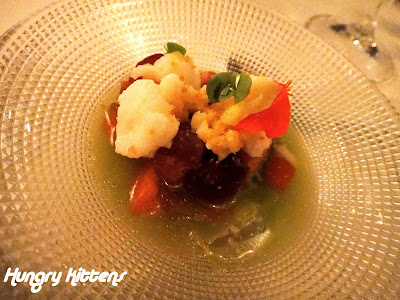 To start, we had a canape of crab and avocado with a lemon soup drizzled over the top. It was light, clean, refreshing and had a great collaboration of textures. A pleasant start to the meal. Though I wasn't famished when we walked in, this little dish actually got my appetite started. 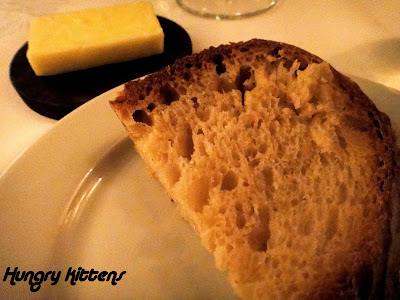 Bread was offered at this stage. We both chose sourdough. It was served with butter and in my opinion, quite unremarkable. 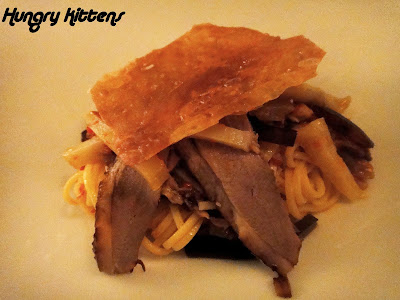 For the first course, I ordered the Green lip abalone. I couldn't detect any abalone flavor in the abalone slices. It was served on a bed of spicy noodles, which was nice but not unlike what you could pick up at an Asian eatery. The 'chicken crisp' was fantastic though. 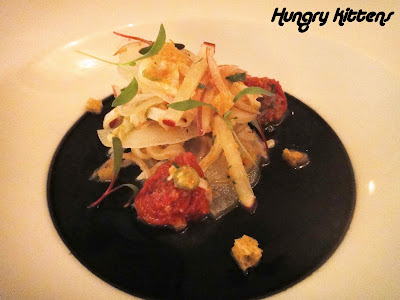 Hien's first course was the squid ceviche. It had a very artistic look, with the squid salad cast against a black background of squid ink. This dish was fresh and delicate. 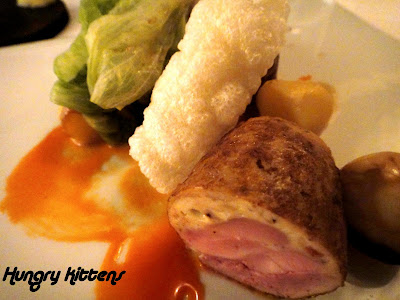 My next course was the eight treasure quail. I'm not sure what the 8 treasures were but I take it they were bound with the quail in the sausage. The interesting textures within the sausage were again contrasted by the rice cracker. I wasn't keen on eating the braised lettuce (I normally hate cooked lettuce) but it was very tasty. 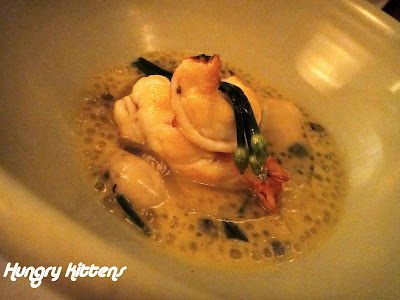 Hien had selected the marron and oyster dish. It was served in a congee-style dish but instead of rice, the grains reminded me of tapioca pearls or sago. This was an extremely innovative dish and combined the seafood with century egg. I liked it. 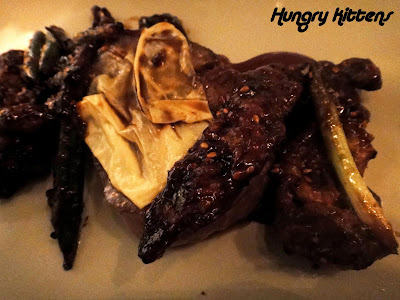 I presume the next course was the 'mains'. I chose the steak. Though the presentation wasn't as strong as some of the other dishes (in fact, in my photo it looks utterly unappealing), it was my favorite dish of the night. 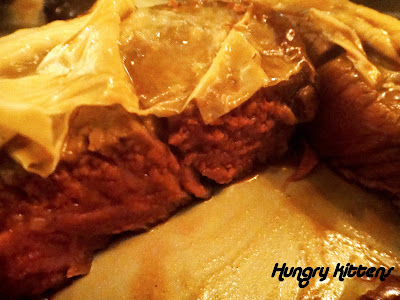 Beyond the creative elements, the steak itself was perfection. It was so extremely juicy and I don't mean in the way that fatty wagyu is juicy (as in, you have fat melting in your mouth) but just juicy from the steak itself. Fantastic. I didn't think the tofu skin complimented much and the snake beans on the side were an odd accompaniment too. The snake beans tasted good on their own and reminded me of a typical Shanghainese dish. 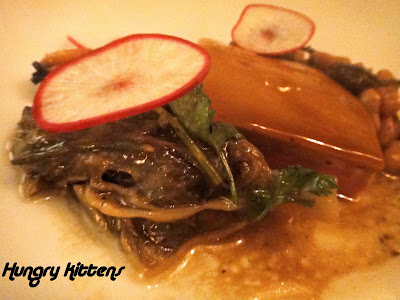 Hien's main event was the lamb. When the dish was brought out, I didn't even know what I was looking at. It was a perfect rectangular prism. That tofu-looking slab was actually the lamb. It was served with smoked mussels, which was interesting, but I didn't think the lamb was on par with my steak. 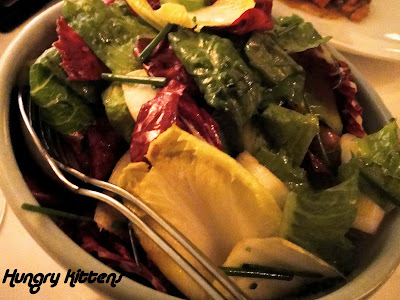 With our mains came a bitter leaf salad. It was very bitter! I liked it because I found it palate-cleansing but Hien thought it was too bitter. 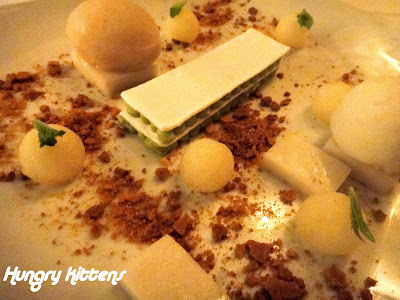 Finally, we had our dessert. Mine was a layered dessert with many components. The plate made me think of a little garden. Only now do I know that vacherin is a type of cheese. My dessert was fun because it was like a mini-adventure exploring the various elements. Other than that novelty-factor, I didn't think it was outstanding in any way. 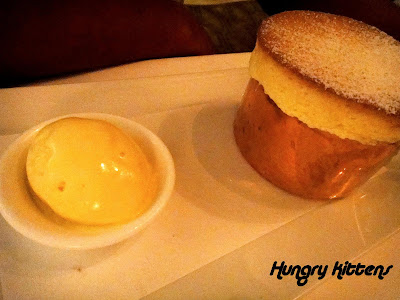 What WAS outstanding was Hien's passionfruit souffle. I always thought souffle was an overrated nobby dessert for people to brag about ('Oh, I made SOUFFLE the other night; hence, I must be AMAZING') because the ones I've had to date were nice but not mind-blowing. This one was really something else. Light, puffy and delicately flavored with passionfruit... it came with a simple dish of ice-cream but I think it was fine on its own. 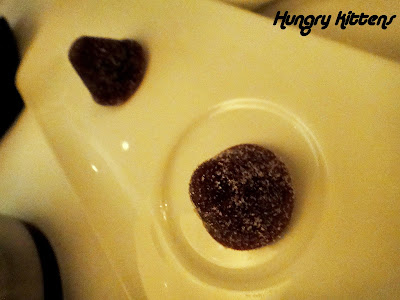 When we had finished, it was just about midnight but there were still a few late diners keeping us company. We were brought out a plate of blood peach jelly. They had a vibrant flavor, which I thought was exactly like a haw lolly (I appreciate that not everyone knows what a haw lolly is). 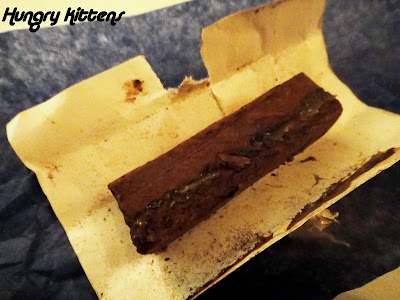 Just as I thought the surprises were over, we were also brought out some chocolate. It was dark and rich and made me think of a truffle log. A lovely way to end the meal.

Aside from the initial wait, I thought the service at Rockpool was EXCELLENT. In no way were the waiters pretentious or snobby. I still feel grateful to the sommelier for suggesting that fabulous bottle of wine. The food was of high standards and was a good combination of fine modern dinning innovation mixed with indisputable good quality and execution. By that I mean that some fine dining restaurants are all puff and smoke but the food just doesn't taste that good. Rockpool delivered in taste, which in my opinion, is the bottom line. It was a great dining experience and I feel justified in flying interstate just to try it :).
Labels: Dining Out, Fine Dining, Interstate, Modern Australian, NSW