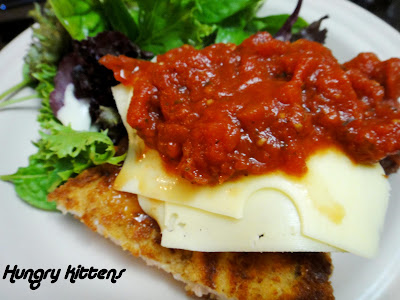 Growing up in a Chinese family, a lot of typical Australian dinner-time creations seem new and interesting to me. Yeh sure, I know what a chicken schnitzel is. And yes I know that a saucier version is called a chicken parmigiana. But the fact is, up until last week, I'd never tasted it before. 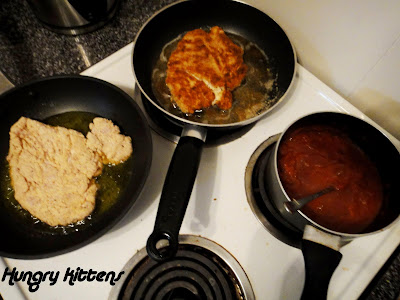 It's possible to have a craving for things you haven't eaten. When I think about crispy, crumbed chicken, molten cheese and tomatoey sauce, I know enough to know I want it. It can hardly be an unpleasant surprise.


When Byron heard I had never eaten one, I think he felt sorry for me and he vowed to amend that by the next day. After pestering him to see through his cooking obligation, we made a trip to the grocery store to pick up necessary ingredients.

We got 2 chicken breast fillets and they ended up being huge. One was about enough for 2 of me so I recommend maybe cutting them in half for a regular serving size.

NOTE: I realize that the cheese in the photos is supposed to be molten. It did get to that point but I was too impatient to wait before taking the snaps. I just wanted to dig in!

1. Flatten out the chicken breast. We got a large saucepan and banged it down until it was about 1cm thick. See the failed action shot... 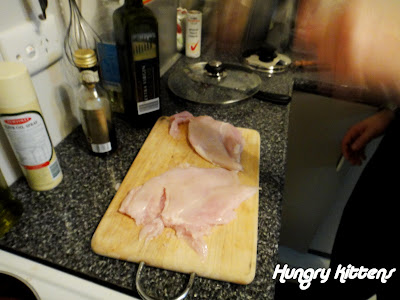 2. Beat the eggs with the water in a dish. Put the flour and bread crumbs in separate dishes too.
3. Get a production line going: the chicken breast gets coated with egg, flour, egg, and then breadcrumbs. Repeat with the other breast. 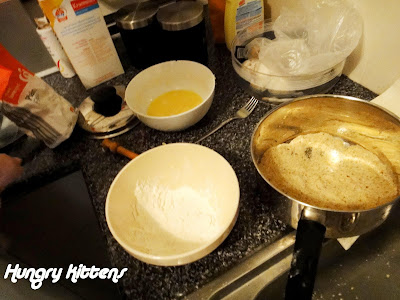 4. Heat some olive oil in a saucepan on medium-high. Place a schnitzel in. Reduce the heat to medium and good four about 8min before turning. It should be golden on the cooked side. Repeat on the other side until cooked throughout. 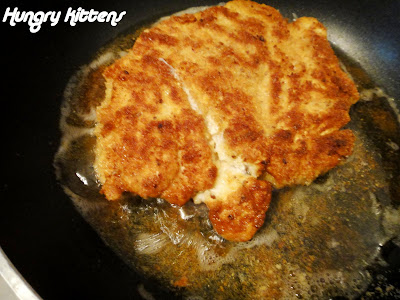 5. We had 2 frying pans going at once but if you aren't as greedy, use one and cook them one at a time.
6. While you're cooking the shnitzels, warm up the parmigiana sauce.
7. To serve, layer some cheese on a schnitzel and pour some sauce over the top. The hot sauce will melt the cheese. I put some leaves on the side to make it healthy. 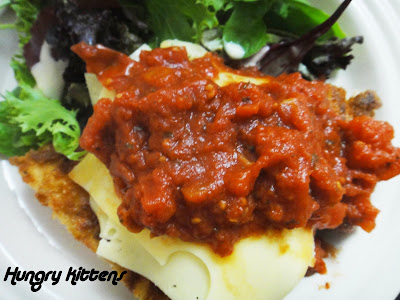 This meal was AMAZING. It was exactly what I wanted. I've had chicken schnitzel at pubs and cafes before but they've been disappointing. This was juicy on the inside and crunchy on the outside. I'm not sure if that has much to do with our cooking procedure... probably more the fact that he's experienced with cooking chicken. 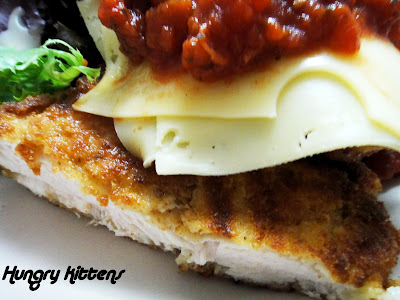 Byron says its very important to beat some water with the egg mixture or otherwise, the egg is too thick and the coating becomes a separate entity to the chicken so that you end up with crunchy coating (not necessarily a bad thing) and the bland chicken meat from which it had fallen (which is a bad thing).

I wouldn't mind trying some chopped herbs or Parmesan in the crust but otherwise it was fine the way it is. The only thing is we want to make our own parmigiana sauce next time and I recommend waiting for the cheese to melt before digging in. It gives it an extra moreishness.
Labels: Favorite Recipes, Home Cooking, Mains, Savory, Stove Top