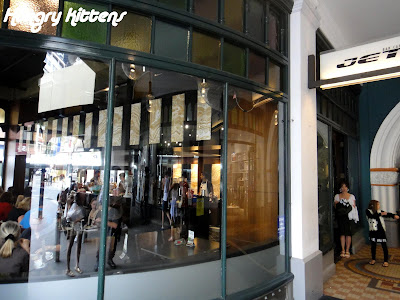 Poor time management skills often implies you don't have ENOUGH time and you're constantly rushing, trying to make your appointments. On day 2 of my weekend in Sydney, I found I had to cope with the opposite problem. 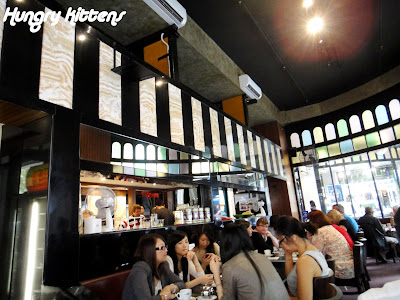 By greatly overestimating how much time I'd like to spend shopping, we ended up with hours to kill before we could justify heading back to the airport.


After running around headlessly and getting into a great number of arguments, we decided that a coffee stop would probably be for the best... for calming nerves and more importantly, for eating up the hours.

It's a bit depressing to think you use up a weekend in another city only to spend it willing time to pass faster.

I looked up a number of cafes but once we got there, found out they were closed on Sundays. Finally, a burst of hope brought us to the Queen Victoria Building.

We literally stepped inside the first cafe we saw.

It was a bustling cafe with all the usual menu/drink items. I was tempted by some cakes but decided against it.

I wanted something refreshing so I ordered a house lemon lime bitters. Hien got the same but also a mocha. Two drinks for one person. 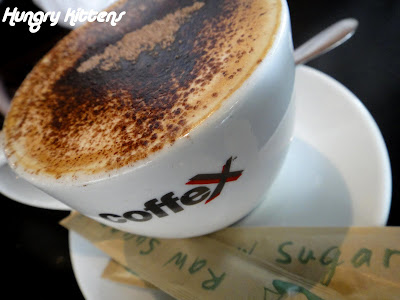 As for the lemon lime bitters... well, they never came. We chased up our order but still, nothing happened. After reminding the waitress again, she said 'oh, you ordered TWO lemon lime bitters. No worries'. Then, she came back saying 'wait, have you gotten any of them?'

When we confirmed that we had received nothing of the sort, she rushed off again. The lemon lime bitters arrived not long after that. 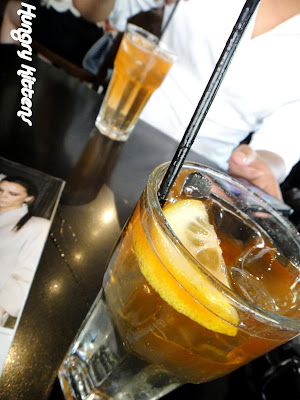 I can't really say they were worth the wait. I was boiling hot and they seemed... not very chilled?

I don't think it's necessary for me to say the service was flawed. Luckily for them, we were hoping to kill time anyway so we didn't mind being mucked around. I can really imagine busy people getting cranky though.
Labels: Cafe and Bistro Dining, Dining Out, Interstate, NSW