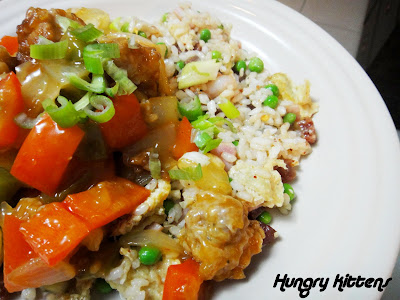 No points for guessing why it is that 9pm last night, after we'd already had dinner, we decided to make sweet and sour pork. I had been watching Masterchef at the gym while Byron was watching at home and though these were different situations, the same thought bubble arose: Need Sweet And Sour Pork Now. 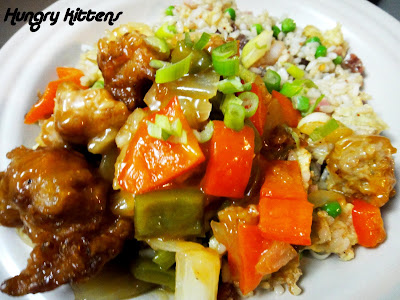 We'd just spent the weekend with an empty fridge/pantry because we were too lazy to go grocery shopping so we stockpiled a mountain of frozen snacks and also picked up the necessary ingredients.


I was given the task of making fried rice. I've made fried rice before that was pretty good and had used that as bragging rights. Unfortunately, Byron didn't get to try any that time so he didn't really believe me and I thought 'sweet, this is my chance to prove it'.

My main concern was that we didn't have any day-old rice so I had to make a fresh batch. Normally, I don't even think about it but I thought it'd be extra important to get the consistency right so I Googled a rice-cooking guide and followed that. Well, I ended up with rice that was basically glue and tried to fry that. No luck. It reminded me painfully of our sweet potato rosti that was attempted from over-cooked sweet potato mash.

I crawled into my room to have a sook but because all the other ingredients were ready to go, it was too much of a waste to do the typical drama queen act of throwing everything at the wall.


For the pork
For the rice
Procedure:

For the fried rice...

1. Cook the rice first according to your preferred method. We used 1 cup to about 1.5 cups of water.
2. Heat some oil in the wok and cook an omelet with the eggs. When it's mostly sealed on one side, start breaking it up into big eggy pieces. Set aside.
3. Fry the bacon and lap chong until cooked and set aside.
4. Fry the prawns until just cooked at set aside. 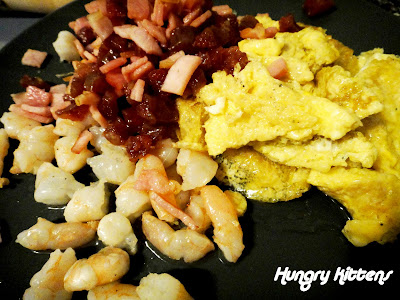 5. Once the rice is ready, start frying that in a hot wok with some oil. Add the other ingredients and stir fry until well-mixed and the grains are nice and separated. 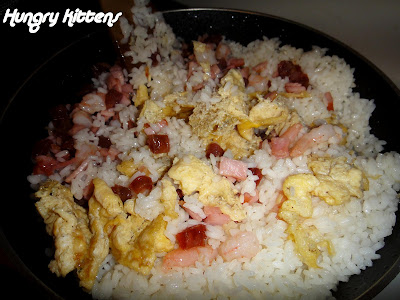 6. Season with oyster sauce. Garnish with shallot and serve.

For the sweet and sour pork...

1. Combine cubed pork with mirin, whisked egg, salt and pepper and cornstarch. You may need more/less cornstarch depending on the desired consistency. The consistency should be a little bit more watery than regular batter. 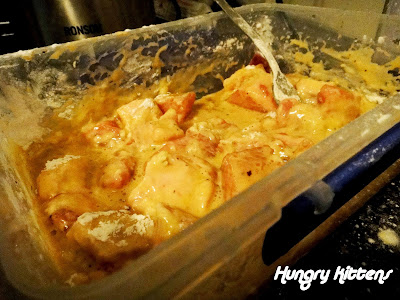 2. Heat some oil in a large saucepan with medium-high heat. Once the oil is hot enough (drop some batter in to test if the oil hot enough), drop the pork cubes in. It is best that they don't touch (ours fused together into a giant mass).
3. Once the pork cubes are golden brown, remove from the oil and set aside on paper towel/rack to drain.
4. For the sauce, mix the juice from the tin of pineapple with the white wine vinegar, soy sauce, tomato sauce in a bowl. Stir and set aside.
5. Meanwhile, stiry-fry the capsicum and onion in a frying pan on VERY high heat with a little bit of oil.
6. Once the vegetables are browned, reduce the heat to medium-low and pour in the sauce mixture. Stir it around and bring to a simmer.
7. When the capsicums are just cooked, turn the heat down to low. Mix some together 1.5 teaspoons of cornstarch with equal parts water. Add this into the sauce and stir until the sauce thickens.
8. Once the sauce is nice and thick, add the pork and pineapple pieces. Serve. 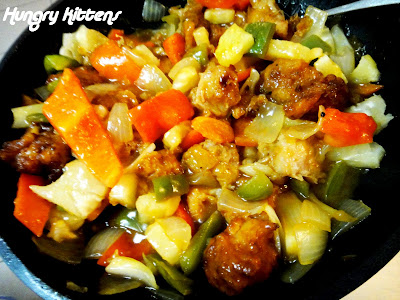 As I've already mentioned, my rice-making attempt was disastrous. We ended up making a new batch that was monitored carefully to prevent it from being over-cooked. 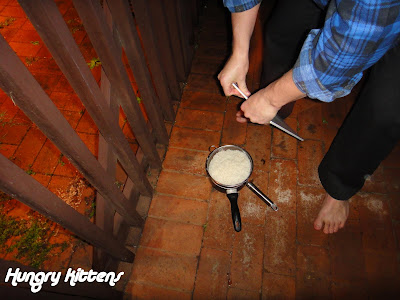 To emulate a dried day-old effect, we even took the rice outside into the freezing night and fanned it. It turned out pretty good. 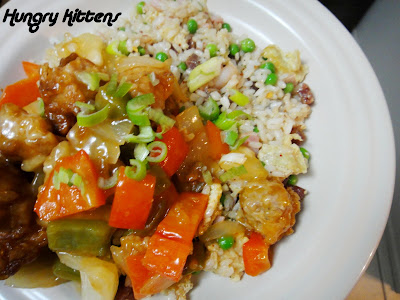 We had this again for leftovers the next day and it was even better!
Labels: Home Cooking, Mains, Savory, Stove Top