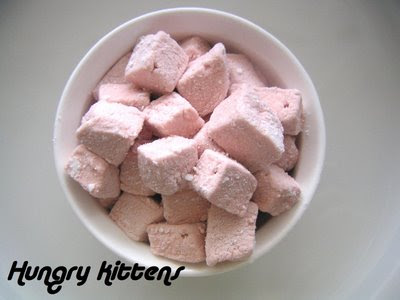 This is a prime example of something that is so easy to buy from a store yet I was temped to make. Am I the only person who is fascinated by the idea of making marshmallows? Before I read recipes for them, I didn't even know what they were made of, or how they got that way. For some reason, I expected egg whites to be involved. I also thought they would be oven-baked before set in the fridge but anyhow, I was proven wrong.

Marshmallows have such an interesting texture that they seem impossible to make at home and you imagine lots of heavy-duty candy machinery to be involved. When you ignore these instincts and succeed, it feels all the more satisfying.


I had my fair share of problems throughout the process. It's another one of those recipes that had me thinking 'this is not going to work' for most of the earlier steps. I kept thinking that I must've screwed up the quantities or got the temperature wrong.

My 2 main disadvantages were:
1) I divided the recipe and thus ended up with only a small amount of fluid in the mixer. When the mixture refused to fluff up at first, I thought it must be because there wasn't enough volume in the bowl to let air get whipped in.
2) No candy thermometer so I didn't know if my syrup was too hot/cold.

I also feel a bit rebellious because my book (I followed the marshmallow recipe in "The Perfect Scoop" by David Lebovitz) specified that golden syrup could NOT substitute for corn syrup when making marshmallows. I ignored this and used golden syrup anyway (refer to the title of this post). He cited the reason for this as 'discoloration' but I got around that with a bit of red food coloring. Charlie nominated golden syrup as his favorite syrup so I am happy that it ended up bringing a nice flavor to the marshmallows and distinguishing them from the supermarket variety.
I quartered the original recipe when I made these but the quantities just got too fiddly (1/16 anyone?) so I'll provide the unaltered version. Keep in mind that you'll end up with more than my photo depicts and also, you'll need a larger tray to set the mixture in.

1. Pour the cold water into the bowl of your electric standing mixer. Sprinkle the gelatin powder evenly over the top and let it sit for a while.
2. In a non-stick saucepan, heat up the remaining water, sugar, syrup and vanilla until all molten and sticky (if you have a candy thermometer, you're aiming for 121 degrees Celsius). Cool slightly.
3. Start up your mixer on high speed and slowly pour in the sugar syrup into the gelatin water. Try to get a steady stream and aim the syrup into the gelatin (as opposed to coating the beaters or the wall of the bowl).
4. Once all the syrup is incorporated, add some red food color (2 drops should suffice).
5. Whip the mix on your highest speed setting for about 8-10min until it fluffs up a bit. It's not going to look like beaten egg whites so if you're expecting a huge change (like I was) then forget about it. It'll just sort of go creamy rather than just sticky and wet.
6. I had already lined a small tray - I knew that I wouldn't be making a lot of marshmallows so I used my mini loaf pan. In hindsight, lining the tray with non-stick baking paper was crucial. I can't imagine how I could have gotten the slab of marshmallow out in any other way so please, do this. Spoon in the marshmallow fluff and smooth it out with a spatula to create even depth all around. 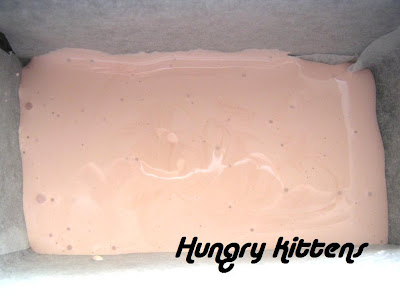 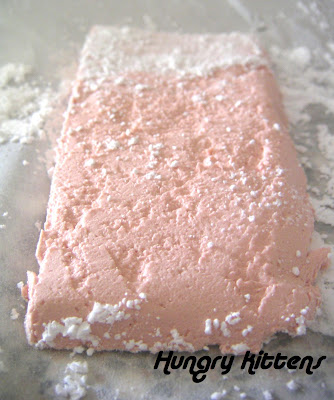 9. I used a small sharp knife to cut my marshmallow slab into strips (coating each strip thoroughly with icing sugar before I went onto the next strip) and then into small cubes.
10. Having some icing sugar beside you in a sieve is useful for getting out of sticky situations (har har) by just sprinkling it onto sticky, newly-exposed-from-cutting marshmallow surfaces.
11. When you have all your cubes, toss in icing sugar to ensure they are all separated. Store in fridge till ready to use - you can keep them there for up to a week.

Rolling freshly-cut marshmallow pieces in icing is ridiculously stress-relieving. There is something so endorphin-pumping about making your own candy that brings out the kid in all of us. I feel giddily happy just seeing the end product. Without a doubt, I've made better tasting food before (I don't even LIKE marshmallows and never buy them when I'm shopping or have the urge to munch on them) but I have such a sense of pride and accomplishment at creating these gorgeously soft and fluffy sweets. It was just so satisfying that they turned out all good and I must encourage you to try it, if only for the fun of it.