Imitation Beard Papa - my own Profiteroles 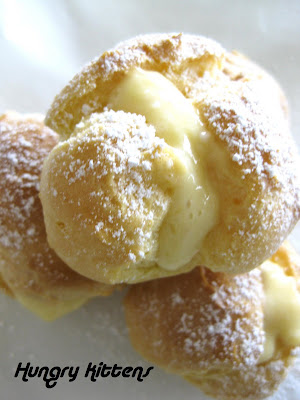 I happen to attend uni classes in the city and this is lucky because I get good access to a wide range of food at lunch. I'm right near the Central Train Station which means that, even though I don't catch the train (I hate it), I still stop by the train station every now and again for their food court.

Don't shun the idea of grabbing food in a location marked for public transport. I'm never going to lie and pretend there's a whole undiscovered section of gourmet wonders but there IS a nice supply of cheap eats. Fast and easy!

That particular train station was also my only known location of a Beard Papa Sweets store in Brisbane (there is now also one in Garden City). I first had Beard Papa cream puffs in Shanghai and I loved them there. The Shanghainese stores have more variety, including one of my favorite sweet cream flavors: chestnut. Here, they sell either vanilla or chocolate custard on a daily basis and also an extra flavor that changes monthly. Beard Papa does not just sell cream puffs and I'm sure everything is yum but I can't bring myself to go there and NOT order the cream puffs.


How does this relate to home-cooking? Well... I've made profiteroles before. When I made my first batch, I didn't really have an idea what they were supposed to turn out like. I've seen profiteroles served with jam and cream in certain cafes and imagined a sort of European dessert. I failed the first 2 times I attempted at making the choux pastry because I stupidly misread the ingredients. Finally, I ended up with a batch of puffs that were decent but nothing out of the ordinary.

Today is Chinese New Years Eve and my parents are having a bit of a get together. I spent all of last week umm-ing and ahh-ing over what I should make for dessert. Originally, I was settled on the idea of a Chinese-style sponge cake with embedded cherries but in the last moment (i.e. yesterday), I decided on giving profiteroles another go. I thought it would be interesting for my parents to try something a bit different from a bog-standard cake item.

I've got 3 different profiterole recipes and they're pretty much exactly the same (bar different toppings and different end quantities). I ended up going with the one in my Women's Weekly 'Best Food: desserts' book. I divided the original recipe by 3 to make 5 large puffs but even I know that's an obscure number. For that reason, I'm giving you the original recipe - they suggest that it makes 36 but that would be small puffs. If you want to make ones like Beard Papa, prepare to end up with less puffs.

The other alteration I made was that I added white chocolate to the filling as recommended by a member of Vogue forums. This worked for me because my custard needed sweetening and the chocolate did that whilst adding a lovely white-chocolate edge. The Women's Weekly recipe calls for liqueur in the sauce but I left it out. I tried adding Grand Marnier into the sauce the first time I made profiteroles and I found it was too bitter. What you add is up to you.

For choux pastry
1. Preheat oven to 200 degrees Celsius. Line 2 oven trays with baking paper.
2. In a medium saucepan, combine butter and water and bring to the boil.
3. Add the flour whilst constantly beading with a wooden spoon until the mixture comes away from the side of the saucepan and forms a smooth ball. Remove from heat. 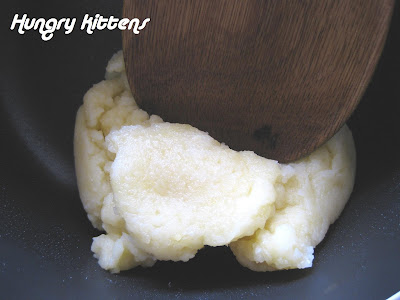 4. Transfer mixture to mixing bowl and beat in eggs, one at a time, with an electric mixer until the mixture because smooth and glossy. 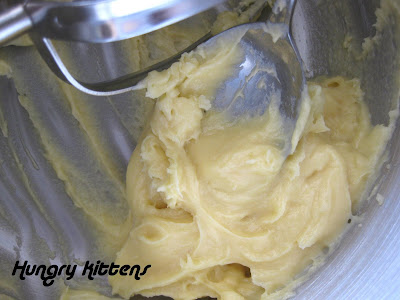 5. Drop rounded tablespoons full of choux pastry dough onto the prepared trays leaving 4cm between each one. I used 2 spoons for this - filled a tablespoon with the mix and used the back of a dessert spoon to scrape and plonk it onto the paper. It was a bit sticky so I used the back of the spoon to smooth out the balls and make them nice and round. 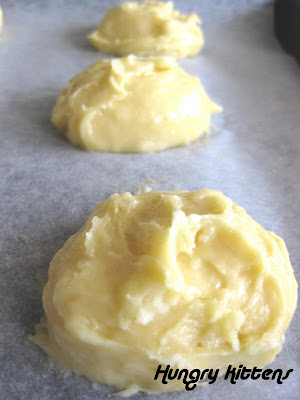 6. Bake for 7min or until pastries puff up.
7. Lower the heat to 180 degrees Celsius and bake for a further 10min or until lightly browned and crisp.
8. Cut an opening in the side of each profiterole and bake for a further 5min until they try out. This is to let the steam out and prevent moisture from making them deflated. When I first read that instruction, I didn't really understand what it meant and sort of just hacked into the side. What helps is to understand that choux pastry naturally puffs out and forms an outer casing with an air sac in the middle. It's not as clear cut as that but should give you an idea. When you cut into the skin, you access the inner air sac and let the steam out. In other words, don't just cut 'across' the skin because you're not achieving the purpose.
9. Cool the puffs on a rack till room temperature. 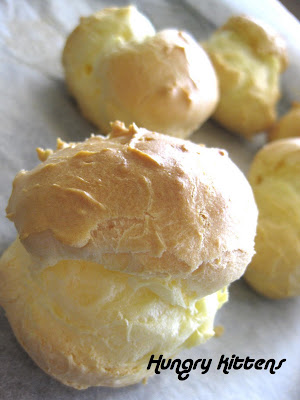 Making the filling
1. Bring milk and vanilla extract to the boil in a medium saucepan. Remove from heat and set aside for 10min.
2. Meanwhile, beat egg yolks and sugar in medium bowl with electric mixer until thick. Beat in the sifted flour. With motor operating on low speed, gradually beat in the hot milk mixture. Once the milk is incorporated, return the mix to the saucepan.
3. Stir over medium heat until the mixture boils and thickens.
4. Add the white chocolate chunks and keep stirring until they have melted and are mixed in evenly.
5. Reduce heat and simmer for 2min. Remove from heat and transfer to medium bowl.
6. Cover surface of bowl with plastic wrap (prevents skin from forming) and refrigerate until cold.

Finishing off
1. One the puffs are cooled and your custard is cold, you can fill them. Either spoon them into the slits you cut before or using a piping bag and straight nozzle. I piped the custard into the slits until they were ever-so-slightly oozing.
2. Dust the tops with sifted icing sugar and voila - they are very much like the ones from Beard Papa (in the opinion of myself, as a regular customer).
Note: You can fill your puffs with whatever you like - from chocolate ganache to savory fillings. Experiment with different custard fillings too. I hear that traditionally, they are filled with ice-cream and drizzled in chocolate. 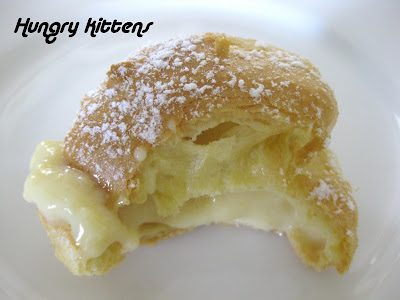 Ingredients:
For the chocolate sauce 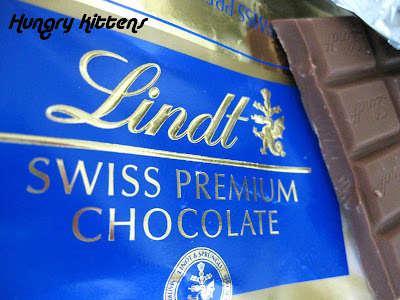 Make your chocolate sauce
1. Stir chocolate, butter and cream in small saucepan over low heat until smooth (I love my non-stick milk saucepan for stuff like this. Almost don't need to wash it afterwards - the sauce slides right out!)
2. You can try different flavorings if you like. Women's Weekly suggests you try adding 1 tbsp flavored liqueur.

Assembling your tower
Note: A croquembouche is a profiterole tower and is commonly used as a statement piece for weddings etc. Click here for an example of what I mean. I am probably deeply shaming the term by applying it to my measly little stack of cream puffs but I liked the term so I'll use it if I want. If I ever make a full-sized tower in the future, I'll change the title of this recipe to 'How to make a tiny stack of profiteroles'. The assembly is open to creativity but I read that lots of towers are 'stuck' into shape using caramel or toffee. I didn't want my puffs to be overly sweet (since they are lovely and delicate as is) so I didn't use anything like that. I just made the chocolate sauce as above and tentatively assembled a stack using the sauce as an adhesive.

1. Briefly work out how many puffs are needed for each layer. Understand that layers get smaller as you go up. Mine was only 4 puffs (I ate one puff with just icing sugar - so yes, only 4 left) so I have a layer of 3 and a layer of... 1. Easy peasy.
2. Lay down your first layer. Drizzle chocolate sauce over the tops and let it ooze over the sides.
3. If you are using caramel or toffee as an adhesive, dip the bottoms of your 2nd layer and stick into their positions on top of the first layer. One 2nd layer is all in place, drizzle chocolate over it again.
4. Repeat till you have just 1 profiterole at the tip (or fruit or decoration). Drizzle chocolate down the whole thing.
5. If this is for a special occasion, you can then decorate with edible flowers, ribbons, whatever. 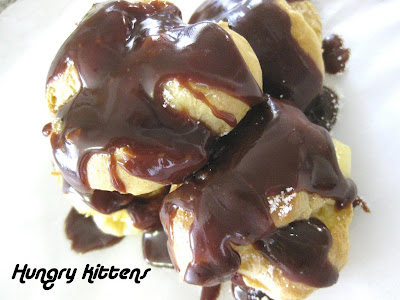 I am extremely pleased with how these puffs turned out. I liked them with just the scant dusting of icing sugar and would not have bothered with a chocolate sauce if I wasn't concerned about presentation. I'm not sure how well these will keep but that's not something I'm going to worry about.