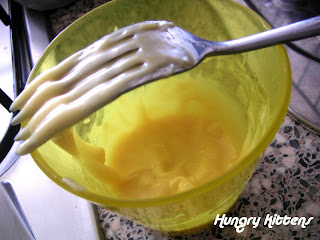 A couple of years back, my parents organized a big family houseboat holiday. There were about 3 sets of couples (mum, dad and grandparents) + some of us 'kids'. The trip lasted 3 nights and was one of my favorite group holidays to date.

We mostly just lazed about on deck and cruised through the strait. The houseboat was slow and 'safe' and yet we managed to get stuck in shallow water a fair number of times. There wasn't much going on in terms of activities. The elders chatted, played mah jong and cards. The children played monopoly and engaged in slightly more physical tasks such as rowing and fishing.

There was food. Lots and lots of food. Imagine 3 families bringing together what they feel is 'enough food'. Add a slight miscommunication between them and you end up with multiples of everything and definitely no fear of dying of starvation.
One thing we didn't seem to have was salad dressing. I think everyone would've been fine munching on plain veggies, washed down with seafood and meat and whatnot but my dad is one of those 'can do!' types who just want to prove they can do everything.

So he set about making his own.

I'll give dad credit where due - he normally has no problem making ANYTHING or undertaking any DIY tasks around the house but for some reason, there was trouble with the mayonnaise. It split once, maybe twice.

I was left with the solid notion that mayonnaise is very very difficult to make.

Nonetheless! I just received my new Jamie Oliver cookbook ("Cook with Jamie Oliver") in the mail and it had a huge glossy 2 page spread on making mayonnaise so I thought I'd give it a go.

I'll be the first to admit that I also had my fair share of problems.

1) Separating the egg. I am indeed VERY embarrassed to admit this but I have an excuse. Many TV chefs are now stressing the importance of using free-range or (even better), organic eggs instead of caged ones. Although I'm a poor uni student with bare minimum income, I lean towards using free-range for reasons of taste and morals. They say that once you go onto proper organic farm eggs, you'll never look back. I can't comment on this 'yet' because I've only dabbled with Coles free-range eggs (not exactly the most genuinely farm-fresh product available) and also, I tend to use my eggs in baking, where the quality of the egg itself isn't demonstrated to its full extent.
While on the topic of eggs, I'll also explain what I've learnt about free-range and organic. Apparently, free-range chickens are allowed to run around when they feel like it. Organic-standard chickens have the extra benefit of a natural diet, rather than one that is antibiotic and chemical-ridden to enhance their growth.
There's some food for thought.
I'll now get to the point. Be wary when cracking open a free-range egg. The yolks are significantly larger than normal. I crack quite gently and was right into the yolk on my first egg. I ended up with a sloppy mashed up egg mess.

2) I couldn't drop the oil in drop by drop whilst beating at the same time. I really 'get' what they mean when they say it helps to have someone to help you hold your bowl or jar. A tall vessel such as a jar or wide cup is infinitely easier to use for this exercise than a shallow bowl. I stupidly started in a bowl and after a while, transferred the contents into a cup.
My oil DIDN'T go in slowly drop by drop as the recipe suggested. I did try but long drizzles kept escaping from my oil bottle, into my mix (and onto the tablecloth and floor). It didn't end up affecting my final product but if you're wary about this kind of thing, I guess you should get a nozzle attachment for your oil bottle so you can control the drop-rate.

3) I didn't know what 'split' would look like. My mayonnaise-making stint was very reminiscent of titration in senior Chemistry. The way that online guides and recipes go on about it, you're made to feel that the mix could explode any second if your hand wavers just the slightest and God forbid you drop in 2 drops of oil instead of 1.

As I already mentioned, I messed up my drop-rate almost continuously and at times I just stopped to stare at my mix before deciding to grit my teeth and see it through. I was convinced that I had already failed but I just didn't know it. I wasn't sure what 'fail' would look like but I did know that my mayonnaise-to-be wasn't thickening.

The only advice I can give on this matter is that if it doesn't look terribly wrong and your mixture still seems like one uniform fluid, then persevere! It suddenly becomes noticeably thicker and when you feel if for yourself, you'll thank heavens that you didn't give up.

4) My final 'problem' may just be a matter of taste. The mayonnaise I ended up with had a lovely mayonnaise color and texture but the flavor was overwhelmingly olivey. Jamie Oliver constantly stresses the importance of buying the most expensive olive oil you can afford because the flavor is worth the difference. I did in fact go out and buy a gourmet olive oil but I'm glad I didn't use that for my mayonnaise. I didn't like the olive flavor in my dressing and in the future, will use a mild-flavored oil such as canola or sunflower.

5) I actually had another problem that shouldn't even bear mentioning. I read the recipe wrong and instead of using 1 tsp of Dijon mustard, I used 1 tablespoon of English mustard in my first egg yolk. It smelt so overpowering that I had a second look at my recipe and lo-and-behold... it was a reading error. So back to square one... I had to crack yet ANOTHER egg.

The reject spoils of my accidents include about 4 egg-whites that need using up (I've frozen them in the time being) and 1 full mixed-up raw egg.

1. Whisk egg yolk and mustard thoroughly in a long vessel. You can use a hand whisk or a food processor. I actually used a fork... 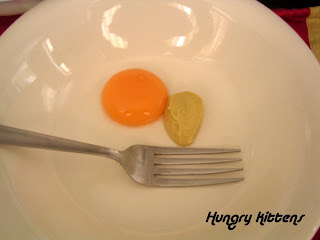 2. Add the oil drop by drop into the mix, whisking non-stop. Make sure each drop is fully incorporated into the mix before adding the next drop. As I said above, however, I didn't manage to adhere to that rule and my mayonnaise developed fine. So maybe it's best if you 'aim' for getting it in drop by drop but don't necessarily panic if you let in a slight wallop of oil in one go. The main thing is to keep beating and INCORPORATE. Remember, I would actually stop beating every time I picked up the oil bottle to drop more in (didn't have enough hands) and then pick up my fork and keep beating. This probably breaks every rule in the mayonnaise-making world but oh well! 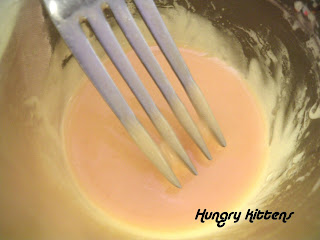 3. Once the mix is thickened noticeably, you can add in the oil in a steady stream until all the oil is used up. 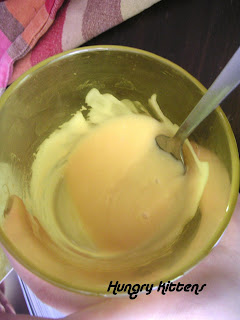 Getting thicker now
I sort of cheated and didn't use that much oil but I guess you have to have a feel for it and stop at a consistency you find acceptable. I stopped when my mayonnaise was thick enough to leave ribbons when I trailed my fork across (see photo at top of this post).
4. Jamie then says to squeeze in the juice of one lemon. I say to take it easy and squeeze in a bit and taste before adding more.
5. Add salt to taste. The salt makes a huge difference to the taste of your mayonnaise.

I can't comment too much on the authenticity of my mayonnaise flavor because I had a hard time getting over the olivey stench. Next time I make a mayonnaise, I'll be able to taste it for what it is and I'll leave proper feedback.

NOW - to transform the mayonnaise into a coleslaw dressing...

1. Chop up a handful of parsley and mix it in
2. Squeeze another 1/2 lemon or so (depending on your taste) and add to your dressing
3. Add 1 tsp of hot English mustard
3. I also added some ground pepper
4. Mix mix mix! 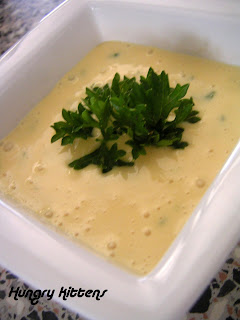 I have to say the dressing wasn't that fab when I just tasted it but once I threw my coleslaw blend into it, it all worked out.

This is the mix of vegetables I used. I followed Jamie's recipe but didn't stick to his proportions EXACTLY. I think that's forgivable.
Tossed it altogether and served the coleslaw as a side with my Tarragon Chicken wrap (top right corner of the photo below). 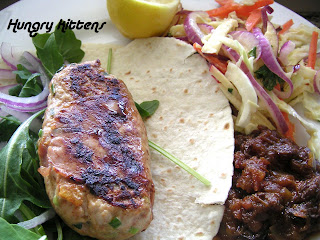 I'll say that there is room for improvement but considering this is my first attempt at making a salad dressing from scratch, the results were sufficiently delicious to claim success.
Labels: Home Cooking, Savory, Sides