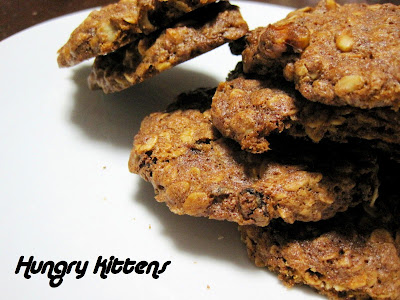 When I was going through my oatmeal phase, oatmeal and raisin cookies were right up there as something I was going to bake. I kept putting it off for 'later'. Later became never even though I had all the ingredients ready and even bought the raisins especially for it.

Just yesterday, we had a small party at uni where everyone brought some food. A friend of mine brought her special oatmeal and raisin cookies. That did the trick to reignite my craving and I ended up baking a batch today.

It's actually quite strange how I decided to bake them... I already had some brownies in the oven. My previous attempt at brownies failed and at the time, I blamed impatience (not being able to wait for the brownies to cool before eating them). This time, I wanted to give my brownies a fighting chance to blossom and rest. To deter me from eating them prematurely, my plan was to get started on another recipe: oatmeal and raisin cookies.

The recipe is from David Lebovitz 'The Perfect Scoop'. I divided the recipe by 1/2 and added walnuts. I saw the walnut version of these cookies in a cafe and thought it was a good combination so that's what I've done here.

1. Preheat your oven to 175 degrees Celsius. Whisk together the flour, white sugar, brown sugar, baking soda, cinnamon and salt in a large bowl. Make sure there are no lumps of brown sugar. 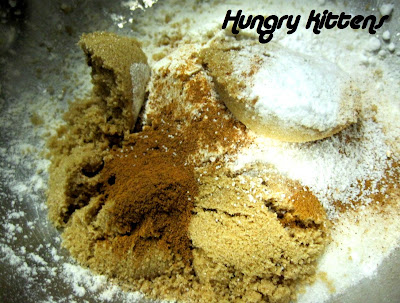 2. Stir in the oats and raisins.
3. Make a well in the center, pour in the oil and milk. Add the egg and stir until the batter is smooth.
4. Using a tablespoon to get heaped mounds of batter on a tray lined with baking paper. Space them out more than I did because my cookies didn't have enough room to expand. 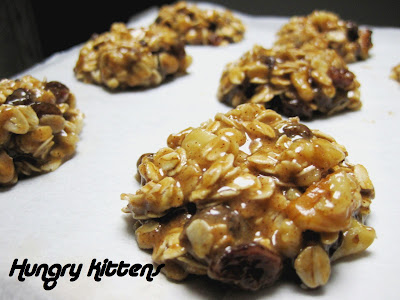 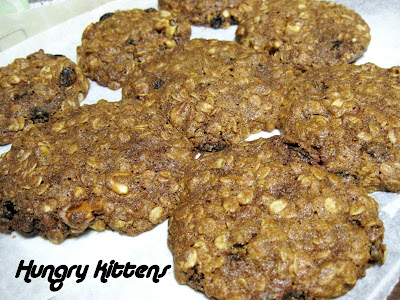 6. Cool them completely on a rack and serve. 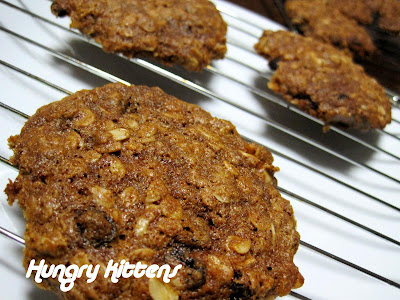 The cookies expanded and flattened out a lot more than I anticipated. As you can see from the photos, when they came out of the oven, they were all stuck together on the tray. Since I'm a very resourceful individual, I got around that by waiting for them to cool and harden before snapping them apart. Easy. 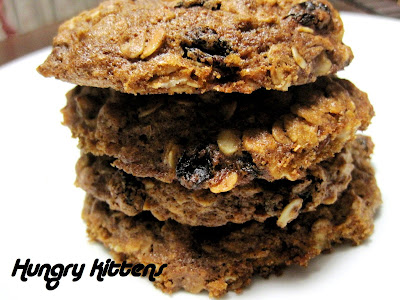 I loved the texture of the cookies. They are crunchy and crisp around the edges but the center is chewy and sticky. David Lebovitz recommends these for sandwiching ice-cream because they're supposed to stay soft in the freezer. I think they're lovely dunked in milk. The oats, cinnamon and raisin sweetness work wonderfully together. I'm glad I added walnuts because there's the crunch and slight saltiness that brings it all together. The cookies are chewier the next day and more suitable for ice-cream sandwiches. 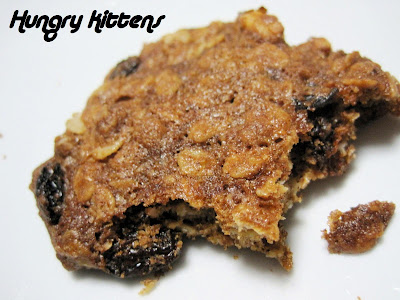