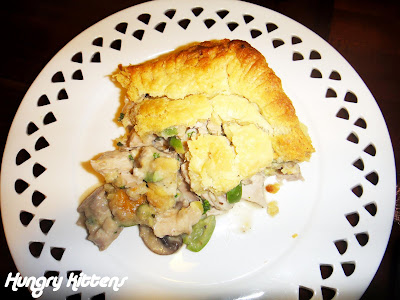 The moment I saw this recipe in the one and only issue of the MasterChef magazine that I bought, I knew I had to make it. I proposed this to Byron as a cooking project but from memory he probably vetoed my suggestion in favor of making curry instead (you'll notice most of the cooking posts are his doing and the majority of those are curries). 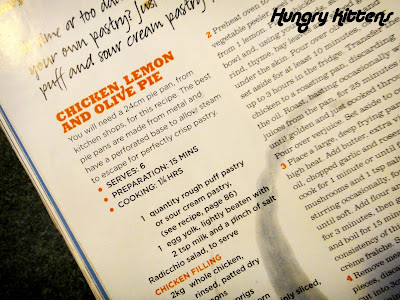 Now, many months later, I finally took the plunge and bought the necessary ingredients required to make this pie. Scratch that. What actually happened was that I delegated that financial task to my lovely parents. 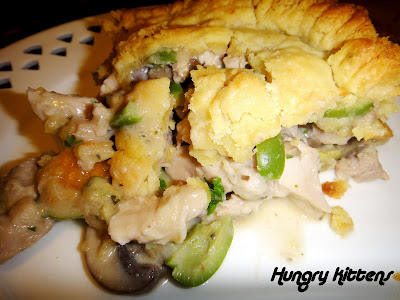 At first glance, the recipe seems very multi-procedural. Once I got started, I realized it wasn't that bad. You have to whiz up a pastry first. That can be done in advance and stored away. You also need to roast some chicken and in the meantime, prepare some sauce. At the end, the chicken is added to the sauce, along with some other bits and pieces. All these is piled into the pastry crust and baked. 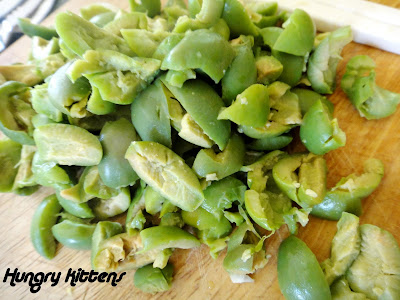 I halved the original recipe but somehow still had enough filling to make a large square pie (enough for 4) and 2 little ones. The pastry I made wasn't enough though so the pastry quantities are for the original amount. I also made some minor changes to the filling by putting lemon juice instead of lemon zest and some extra sour cream. Oh, and we used thighs rather than a whole chicken.

1. Cut the butter into approximate 1cm cubes and refrigerate until chilled.
2. Process the butter and flour in a food processor until fine crumbs form. 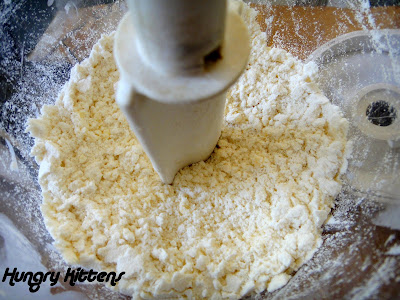 3. Add the sour cream until the dough just comes together.
4. Press into a 1cm thick disc, wrap in glad wrap and refrigerate until required.

1. Using a veggie peeler to remove the zest from the lemon. Stuff this zest, sliced garlic and thyme under the skin of the chicken thighs. Drizzle with olive oil and sprinkle with salt. Cling wrap and leave to marinate for at least 10min but up to 3hours. I made my pastry in the time it took this to marinate. 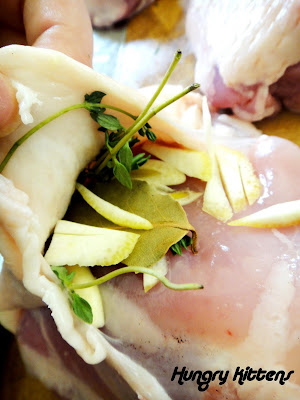 2. Preheat the oven to 190 degrees Celsius. Roast the chicken thighs for around 25-min minutes until golden and crispy on the skin and tender within. 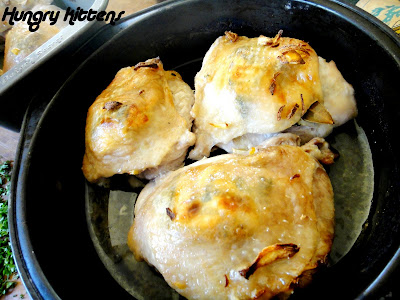 3. In the meantime, heat up the olive oil and butter in a large frying pan. Cook the garlic and rosemary until fragrant.
4. Add the sliced mushrooms and sauté for around 5min or so until soft. 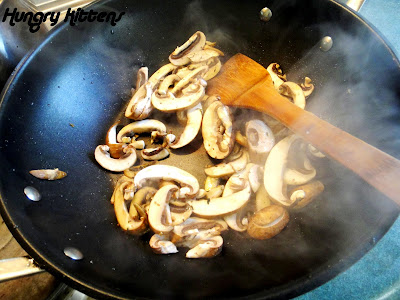 5. Reduce heat slightly and sprinkle the flour over the mushrooms. Mix until absorbed.
6. Gradually add the stock whilst stirring to ensure even absorption. Let it simmer for around 15min until thickened to the consistency of custard.
7. Remove the mushroom gravy from heat and stir in the sour cream. Set aside. 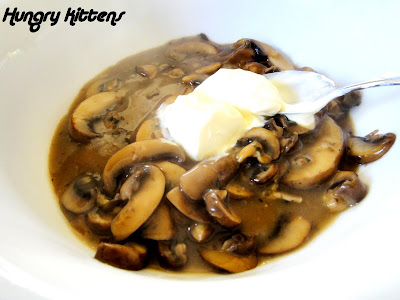 8. Remove the skin, bones and stuffing from the chicken thighs. Cut the meat into 3cm cubes (or whatever consistency you like).
9. Mix the chicken, parsley and olives into the mushroom mixture.
10. Roll out the pastry into a 3mm sheet. Gently drape into the inside of your pie tray. I just used a baking dish but I think a pie tray would be more appropriate. Trim off the excess and re-roll to form a disc for the lid. You might need to return the pastry to the fridge if it becomes overworked and too hot to manipulate. 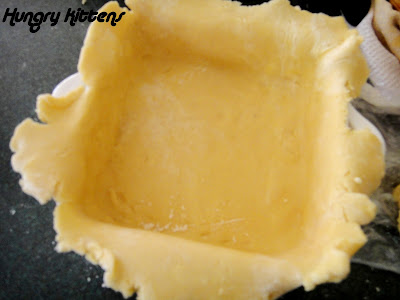 11. Preheat the oven to 220 degrees Celsius. Fill the pie tin with filling. 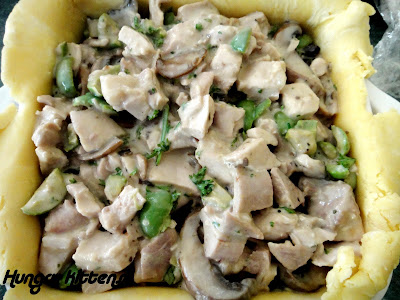 12. Layer the pastry lid over the top and fold the sides over to seal. Some say you can use a milk/egg wash to seal the seams but my pastry was so short (as in, soft and buttery) that it fused without any problems.
13. Slice some air vents into the lid. 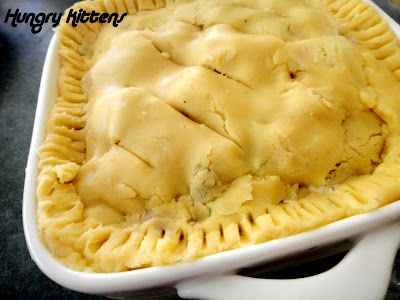 14. Bake the pie for around 30min on the LOWEST shelf in the oven. The pie crust should be a deep golden color when ready. 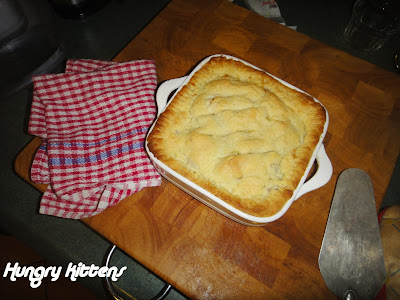 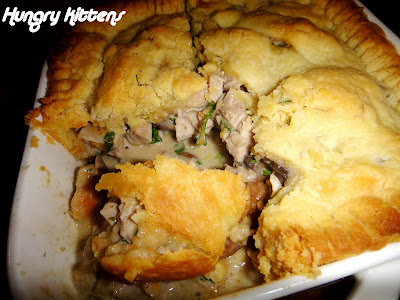 There was a bit of drama getting the pie slices out of the baking dish intact but after this was sorted out, we had a ball digging into the pie.

I've never seen the combination of chicken, olive and lemon used anywhere but when I heard it, I had a feeling it would just taste awesome. The filling was great! The olives and lemon added a zing to what would otherwise be a boring chicken pie. The mushrooms created a subtle earthiness. The filling consistency was great... nice and saucy with adequate chunks of chicken. 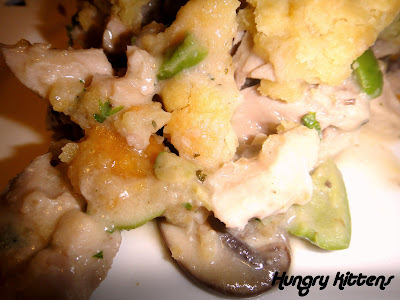 It was especially great coupled with the pie crust. Though I admit my crust was unattractive and too 'short'(as in, too crumbly and melty), it was a perfect adjunct to the pie filling. My mum in particular enjoyed this though dad thought it was too buttery for him. It was like a savory shortbread!

The whole dish was just so hearty and moreish. You can see how it would be an iconic Maggie Beer recipe. The best thing too is that it wasn't very difficult to make and I have a good idea of how to do pies now so I can make variants if I want.
Labels: Baking, Favorite Recipes, Home Cooking, Mains, Pastry Pies Tarts, Savory