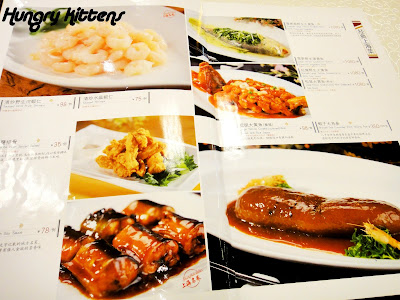 This trip was the first time dad and I went back to China together. He was determined to show me some traditional gourmet Chinese food.

When I go to Shanghai, I’m attracted to ‘trendy’ chain restaurants that are furnished nicely and have big photo menus with English descriptions. Dad knows this and said he wanted me to try stuff that I would not order myself.

Mum took us to a restaurant called Shanghai Number 1 (which raised my expectations somewhat). 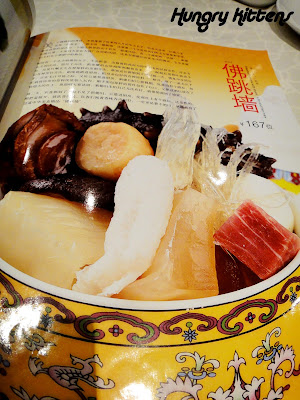 I love these kinds of restaurants in China because the menus are huge. This one was extra awesome because it had texts about the history of Shanghai with accompanying photos.

We ordered a few simple dishes to start. 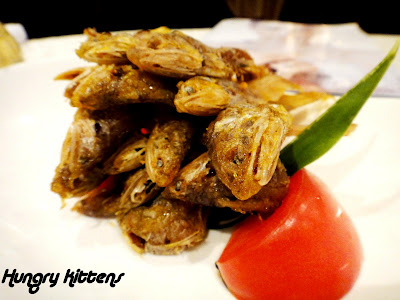 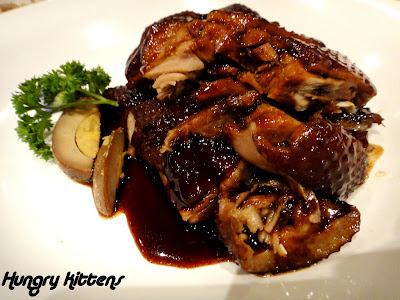 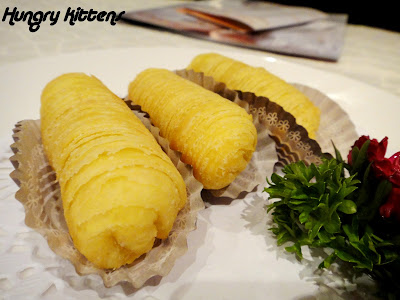 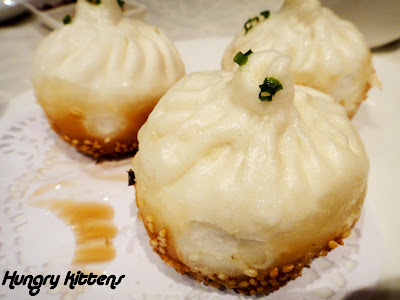 What really caught my dad's eye was a soup dish called Buddha Jumps Over the Wall (literal translation from 'fu tiao qiang'). The story behind the name (according to dad) is that while monks are meant to be vegetarian, the smell of this stew cooking is so aromatic that it drives them to leap over walls to get to it. I Googled the name and found that Wiki has a similar explanation. 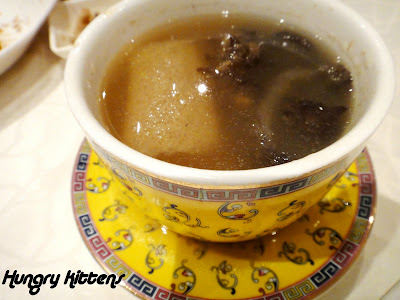 Buddah jumps over the wall

The stew is of Cantonese or Fujian origin and contains many high-end ingredients such as abalone, sea cucumber, shark fin, scallops and Chinese ham. It's high in protein and calcium... meant to be good for you. 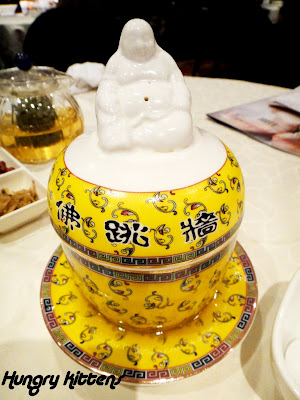 Our soup was meant to be a single serving and came in a cute bowl specifically designed for it. 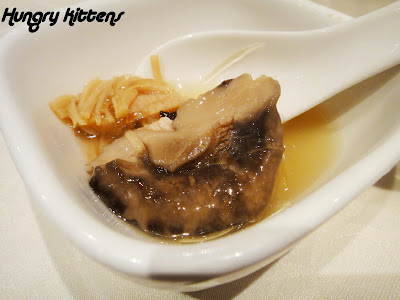 We three shared the bowl around. It was very rich and tasty. The soup itself had a sort of gelatinous quality (what you get when you have many high-collagen ingredients like sea cucumber) that made it thicker than a broth.

One of dad's restaurant picks was a place that specialized in crab. Not just any crab but one that Eastern Chinese people go bonkers for: the Chinese mitten crab aka 'da zha xie'. 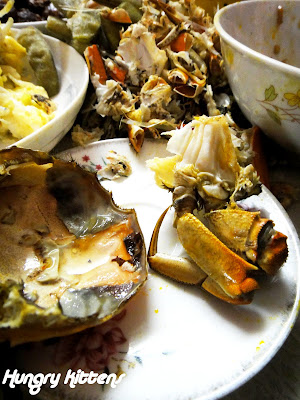 Usually, the crab is just steamed, chewed apart (I can't think of a more glamorous way of putting it) and dipped in gingery vinegar. This crab, like most Chinese food, is very seasonal and there are even different ideal months for the male and female crabs.

At the crab restaurant, mum and dad also chose a shrimp dish that they really enjoyed. 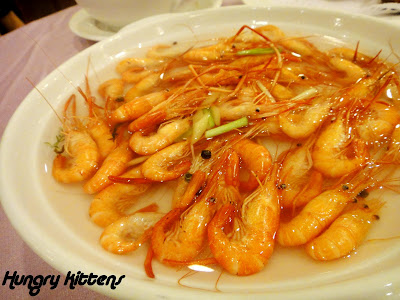 We also splurged on a dish which was just the crab meat stir-fried with the roe. 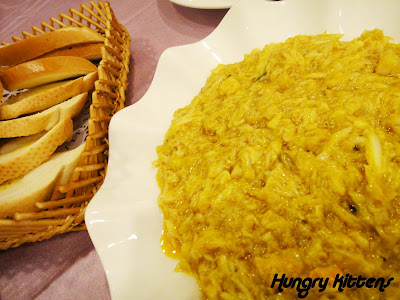 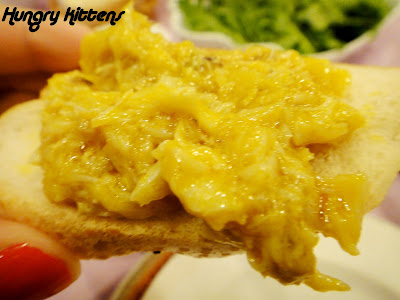 You're supposed to spread that over toasted baguette slices provided but I thought the mixture was great on its own. It was extremely flavorsome. 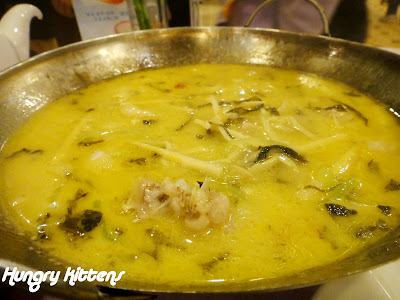 Another crab-specific dish was a soup with crab roe, pickled vegetables and frog legs. It had a unique flavor and aside from being slightly over-salted, was super decadent.

Dad's second restaurant picks was a place called "The Old Restaurant" (translated from 'Lao Fan Dian'), located in Oldtown. It is famous for traditional Shanghainese cuisine. 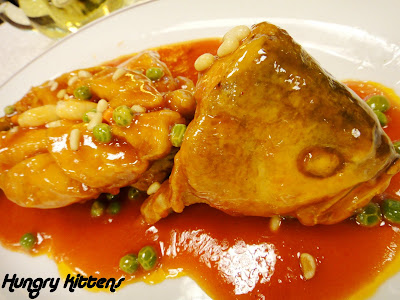 Mum ordered a pine nut yellow croaker for me. It was something I've seen restaurants here in Brisbane and mum promised to let me try it in Shanghai where a more authentic fish is used. It was delicious! It tasted like fish KFC with a sweet and sour sauce. 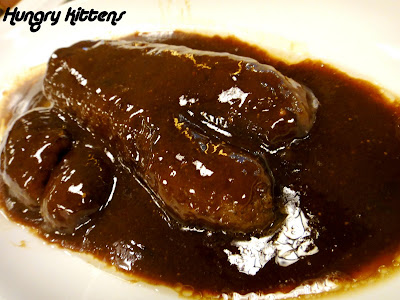 Dad really wanted to try the sea cucumber cooked in shrimp eggs. It's another delicacy and when cooked well, should be tender but not mushy. 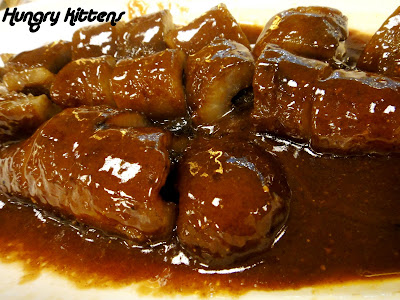 This version was cooked well in placed but a bit too firm in some pieces. The shrimp egg sauce was amazing though. The flavor was intense. 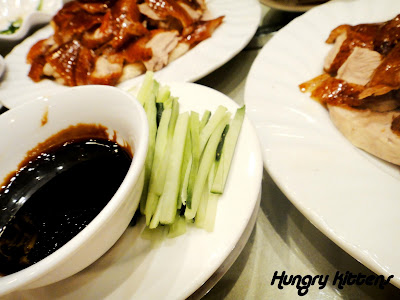 Of course a post about gourmet Chinese food is not complete without mention of Peking duck. I've once said that Peking duck would be a death row choice for me. 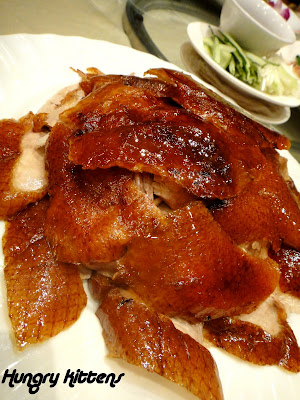 We settle for substitute versions in Brisbane (where dad buys a roast duck and re-roasts it and carves it himself at home) but I've always maintained that in China, it's way superior. The reason is that the breed of duck is different and the ducks are supposed to be inflated with air as they are roasted so that they become plump and the skin is thick and crispy. 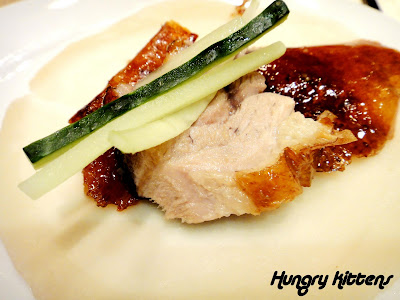 I'm not sure if we were just unlucky but both times we had Peking duck this time, it was a bit disappointing. The second time was at a Peking duck restaurant (which I've been to before and had great experiences with) but rather than plump, the ducks came out shriveled like the Cantonese BBQ duck you see hanging on meat hooks. Still tasty but not to my expectations.

All in all, dad opened my eyes to some dishes that back in the day were reserved for royalty. China's history of good food is so extensive that I'm sure there's many more things to try (and am happy to do so).
Labels: Asia, Asian Restaurants, Commentary, Dining Out, Travel