Bonsai Botanika for Coffee and Cake 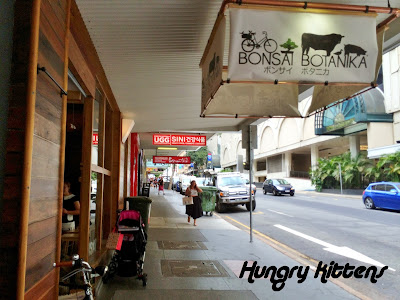 Bonsai Botanika was one of those things I heard about after returning from Europe that made me feel like I was away for much longer than 3 months. Before my trip, it simply didn't exist. After I got back, it was the talk of the town on Urbanspoon. Naturally, I wanted to try it straight away to see what the fuss is about. I half-heartedly read a description about the venue being a ramen bar and figured that was that. Later on in a discussion with a friend from work, I learnt that it was most famous for its flourless chocolate cake. Hang on. What? Ramen cafe famous for cake? It was time to do some background reading. 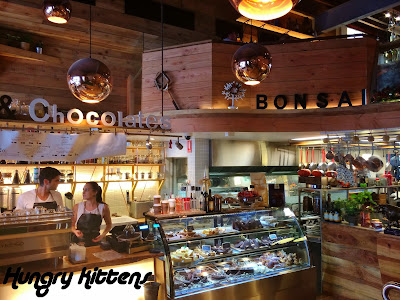 I don't normally like to read other reviews about a venue in case it influences my judgement but in this case, I couldn't help myself. Bonsai Botanika has such a mixed reception through the online blogosphere that I wanted to know if it was worth my time going at all. After a few articles, I still hadn't figured out the entire picture. Apparently, BB was a hybrid of cafe x ramen x grill. What an odd mix! Furthermore, I read that it was the brainchild of the people behind Edamame in St Lucia, which is an eatery I loved during my uni years. My curiosity was enough that I wanted to at least give this place a go.


Both myself and Marc were put off by people's comments about the ramen being overpriced and overhyped. I decided to file that away for later consideration and instead, go for the signature item of flourless chocolate cake. When I walked into Bonsai Botanika, I instantly fell in love with the decor. I'm not sure how well received it is by the male gender but I felt perfectly happy wrapped up in the urban barn fittings with artificial turf and hanging metal orbans. It's kooky and random but not at all messy. There's even grass on the stairs, leading to the second and third floors of the split level design. On this first visit I played it safe and stayed at ground.

I literally stared at the hot chocolate menu for 5 minutes or so trying to figure out what on earth was going on. There seemed to be options galore for everything from flavour, intensity and style or thickness. I'll admit I was overwhelmed. If I become intent on ordering something from the specialty drinks menu in the future, I'll have to ask an employee for help. I opted for a plain latte, reasoning that I wouldn't want anything too chocolatey because I was having flourless chocolate cake. 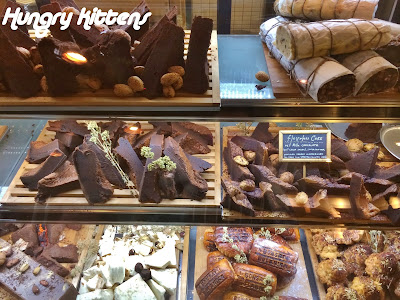 There seemed to be way too many options for flourless chocolate cake too but I will say that every chunk (and they are just chunks arranged in tantilizing piles in the cabinet) looked massively appealing. I'm not sure if all the piles represented different types of cake but my quick sweep revealed that there were dark ones and white ones and some had nuts. When I asked for a slice of "the flourless chocolate cake" and waved in that general direction, the counter girl didn't ask for further elaboration so I assume there is a main, generic one that first timers get. I was relieved. 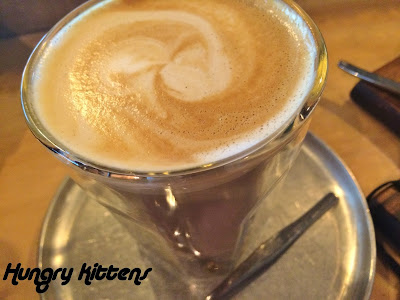 I perched at a raised platform overlooking the counter. My order didn't take long to be brought out. I was so keen on tasting the cake that my coffee sat unloved for a good few moments. When I did get to it, it was a nice coffee and refreshingly bitter in contrast to the cake. Coffee and chocolate cake is a timeless combination. 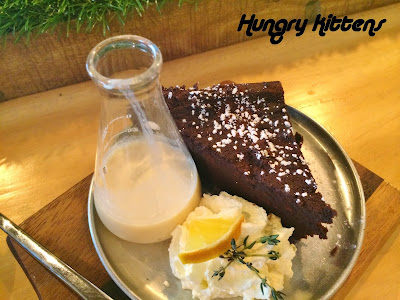 The cake was served on a wooden board, which you might think is the cheat's way of making things look 'rustic' but at BB, looked appropriate. There was a little dollop of whipped cream and a vial of liquid  of unknown purpose. I simply poured it over a portion of cake. It was an orange-scented milk that rather than coating the cake like most sauces would, infused it with an orange flavour so that it became jaffa-like. I'm not a huge fan of fruit with chocolate so I ate the rest of my cake without the milk. 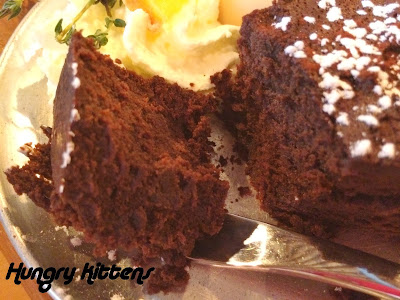 To me, the cake definitely lived up to the hype. It was simple, which is just how a flourless chocolate cake should be. It was rich, dense and moist but somehow not at all overbearing or cloying. It had a suggestion of crumbliness without tasting dry. With most of these types of cakes, I feel sick after a couple of mouthfuls but I managed to finish the whole piece here and still want more. I think a large part of that has to do with it not being too sugary. 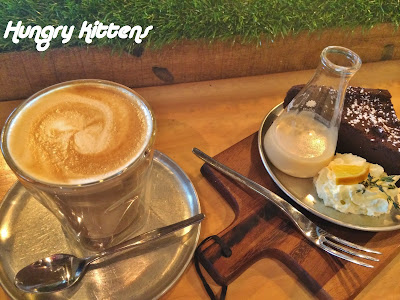 I liked my coffee and cake combo at Bonsai Botanika. If they were a bit on the pricey side, I didn't notice and in any case, think it was worth it. I'm still hesitant to try anything from the other levels but the environment is just so lovely to me that I don't think I'll be able to resist going back.