Mighty Mighty for a Meaty Feast 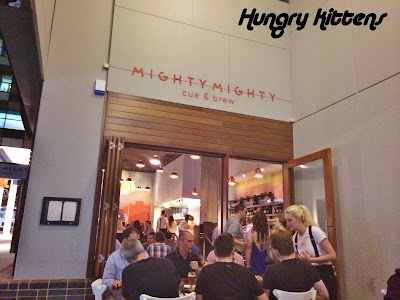 Continuing on my love affair with all things Southern American, I arranged a trip to Mighty Mighty last weekend.  Marc queried whether we had already been to Mighty Mighty before. It is unwise of him to ever cast doubt over my restaurant memory and the place he was thinking of was in fact Funny Funny. Besides both having redundancies in their names, these two restaurants are nothing alike. Funny Funny is a Korean restaurant. Mighty Mighty features Southern cuisine with an emphasis on meat. I pitched the menu to two carnivorous males and they baited without question. 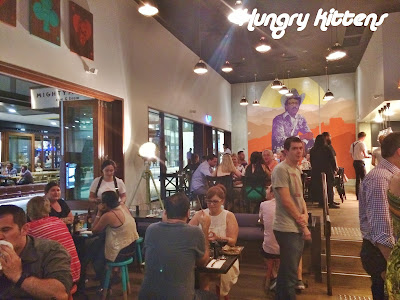 Mighty Mighty is located near James Street in the new M and A centre. I swear this whole building popped up out of thin air (or maybe I just haven't explored the Valley in a long time) and there's undoubtedly many other newbies venues I should check out in the future. Our restaurant of the evening has a large, inviting outdoor area and more tables inside with a view of the kitchen and bar. 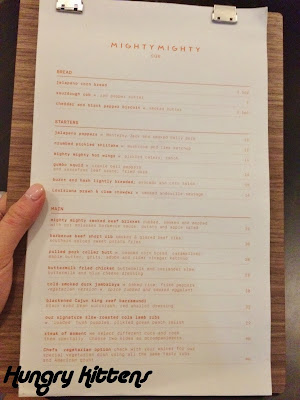 I was glad we got a seat outside because I just liked the feel of it. We ordered drinks to start with. I had a gin and tonic for myself and the boys tried the smoked versions of their liquors of choice (rum and whiskey). Marc liked the smokey flavour but Garthritis was 'undecided' before shifting to 'prefers unsmoked'. My g and t was served with a slice of cucumber and was in my mind, the epitome of what this classic drink should taste like: refreshing and calming with a touch of class. 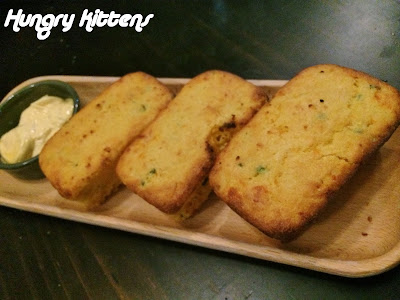 Marc fuddled with my plans for food by ordering corn bread to start with. I originally was going to try the pulled pork main but because this main came with corn bread on the side, I ended up ordering the lamb ribs to avoid repetition. I'm not sure if it would have been the same corn bread in both options but the one we had as a starter was really good. It was crumbly and had meaty ham flavour throughout. Like the dark spirits, it had a vague smokiness to it and I definitely liked it here with the cornbread.

Our mains arrived a good amount of time after (not too much time had passed but it also wasn't rushed; IMO this is an artform in itself) and I'm sure the boys were pleased to see the serving sizes were fairly generous. 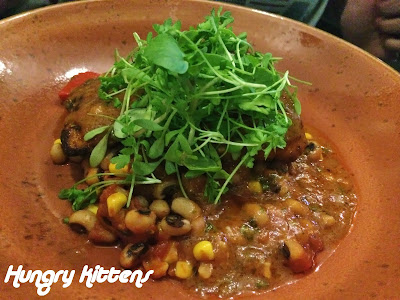 I'll start by reviewing Garthritis' dish because it's probably the one that left the biggest impression on me. The key here is expectation vs reality. I liked the sound of so many dishes on the menu but I'll admit the barra wasn't one of them. I just don't really like to go for fish at western restaurants, especially not a meat restaurant. Thus it was a great surprise to me that this barramundi was delicious. It was cooked to tender flakes and the seasoning was spot on. The fish was served on a bed of beans (affectionately referred to by our table as 'baked beans') and had a garnish of fresh herbs. 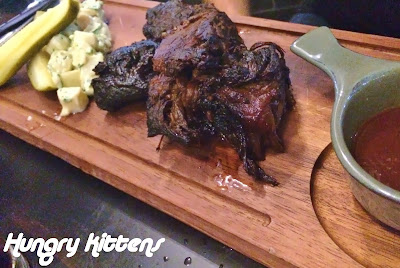 Marc's main was the Mighty Mighty beef brisket. The meat looked dry but looks can be deceiving. It was actually very tender and melty but with a charred and crisp exterior. By now, we know that 'smoked' is a key element to the cue and brew at Mighty Mighty. I liked the sweet/savoury molasses braise. As a namesake dish, I believe this does well to showcase what the kitchen is capable of. 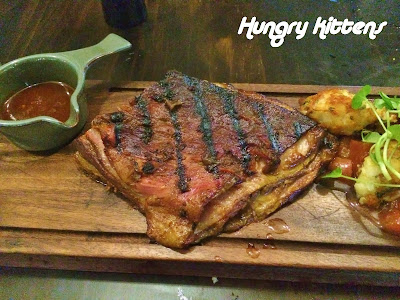 My main was the lamb ribs. Wowzers. These were mighty fatty lamb ribs!! I go through health spurts periodically where I try to eat clean and consciously. It's a good thing I wasn't in one of those moods last Friday night because I wouldn't have been able to touch the dish. Literally. I had to stop on about 3-4 separate occasions to wipe the grease off my cutlery. I kid you not, this was a necessity because otherwise they slipped out of my fingers. Since I wasn't giving a crap about healthiness that day, I ate a big portion of the lamb ribs. They were very tasty, as long as you're not put off by a greasy mouthfeel and the look of too much high shine lip gloss spread past your lip line. The little potatoes were a winner though.

Aside from the fattiness of the lamb ribs, we loved all the food at Mighty Mighty. Smoked spirits is a new thing to us but we thought it was an interesting concept. The atmosphere of the restaurant suits its menu. The vibe is that of upmarket Southern cuisine that is more restaurant/dinner quality whereas somewhere like Southside Diner (which we didn't enjoy as much) aims to be more casual and suited for lunch.