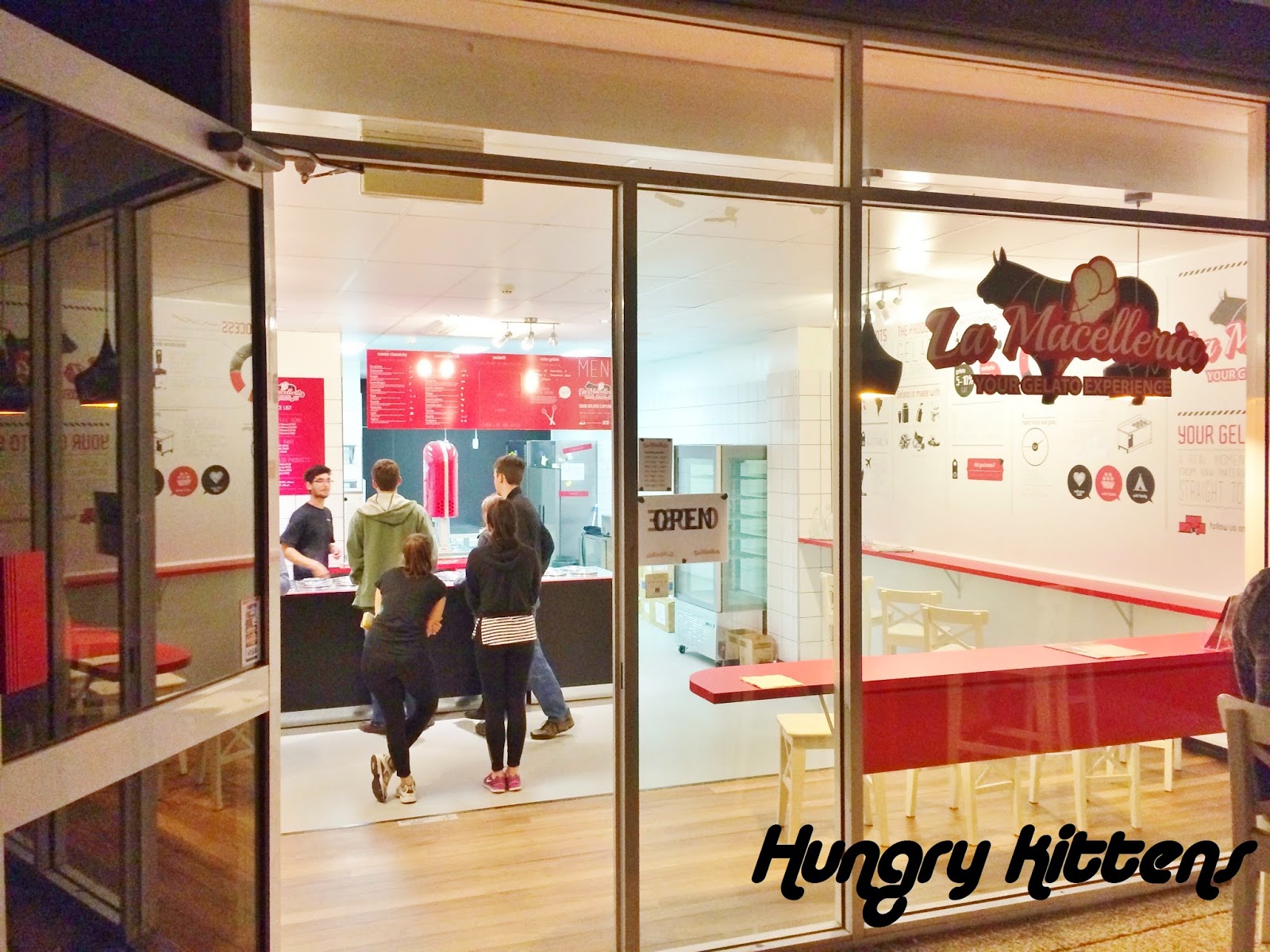 I think I give off the wrong impression that I'm an insatiable sweettooth. Sure, I have days when I really crave cake or chocolate (and who doesn't?) but overall, it's savoury food that I love. The one exception is gelato. I can have gelato any day of the week. I could eat it instead of breakfast, lunch or dinner and then have it again for dessert after. I can't seem to get sick of gelato like I do with other sugary foods. And that's why I try my hardest to stay away from it when I'm not on holidays because I know once I start, I can't stop. 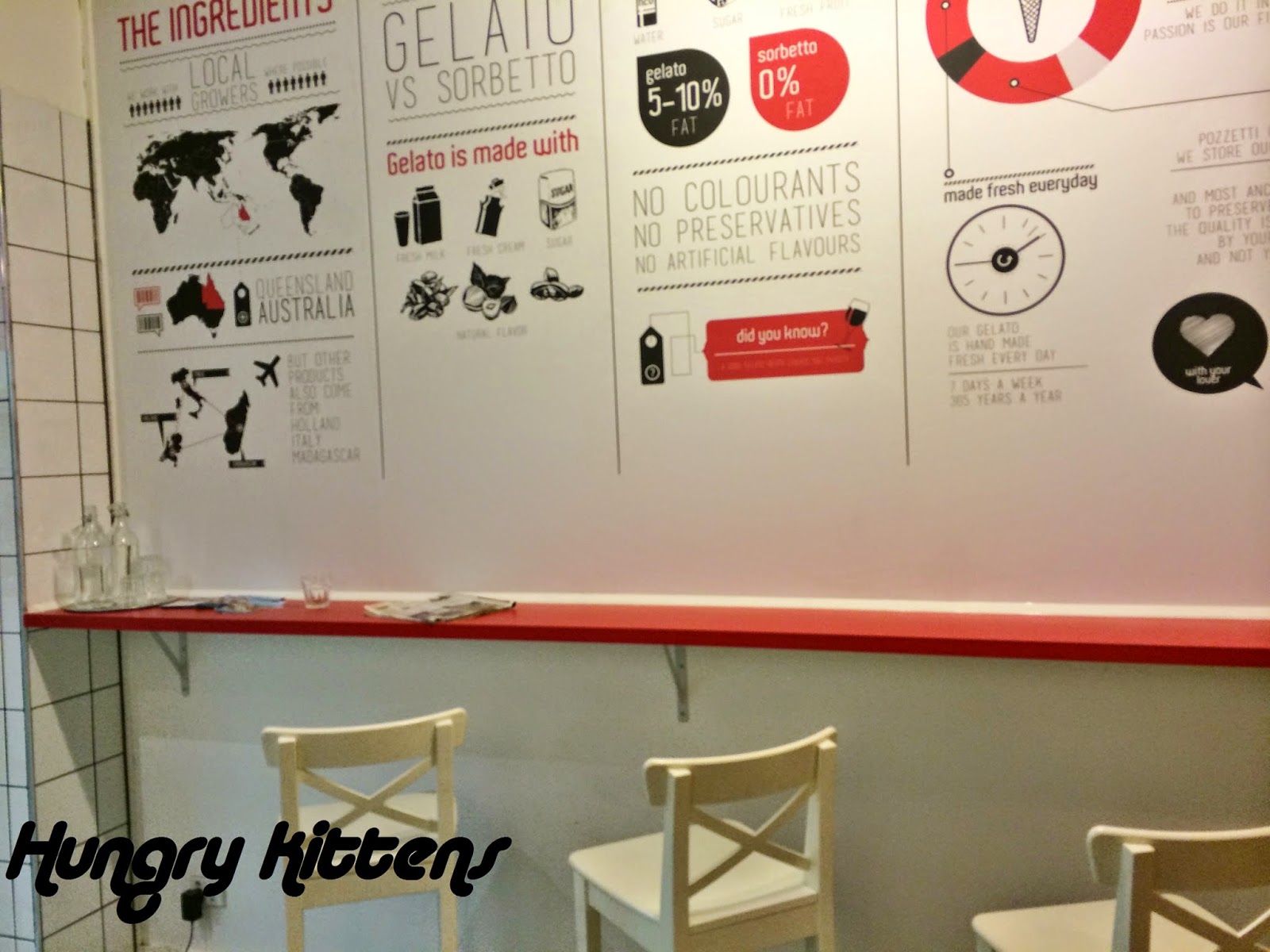 After our huge dinner at Ribs and Burgers, any resolve to be healthy had already melted away. Sad to say, we fell for the age old flawed diet mentality of "today is ruined anyway, we'll start fresh tomorrow". I sure wasn't going to waste my rare dessert slot on any old sugar fling; I wanted gelato, and that was that. Jenny had recommended La Macelleria Gelateria the day before and since we were already in the area, it was the obvious choice.

La Macelleria is located on Florence Street in Newstead, around the corner from the main strip of restaurants on Vernon Terrace. We didn't notice much else directly around the gelato store (it was 8-9pm at night) so it was quite easy to spot. The shopfront is small and you basically walk in, decide on what flavours/size you want and order. Simple. The hard part is picking which flavours to get. 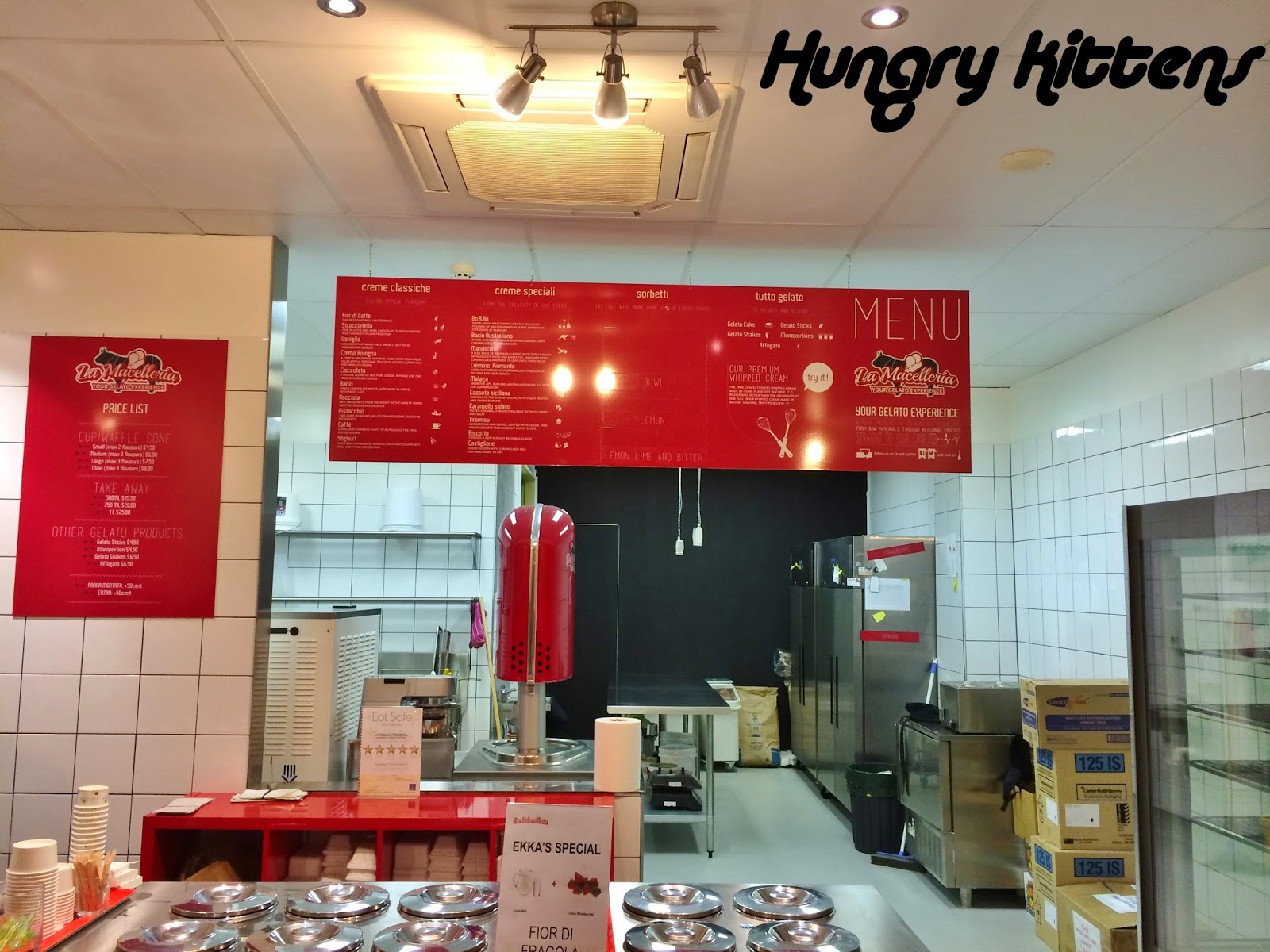 Pistacchio was an obvious first choice for me. I ALWAYS get pistachio gelato. I think it's good because it gives me a point of comparison between different gelato stores. Marc and I both ordered the 'medium' size, which entitled us to 3 flavours each. Aside from the pistachio, I went for the Bacio Australiano and the Crema Bologna. 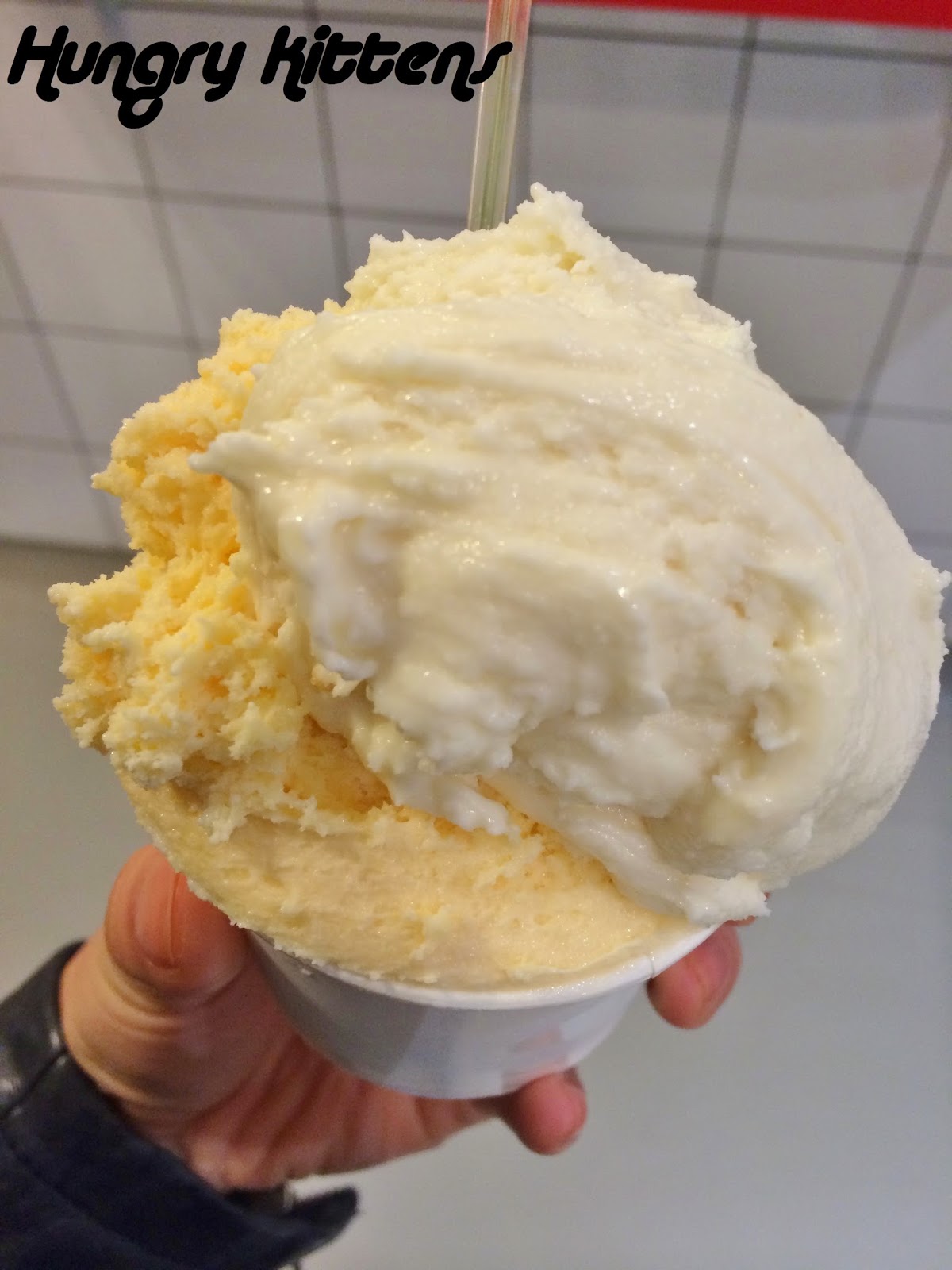 The flavour at the top of my gelato pile was the Baci flavour, which was a blend of white chocolate and macadamia. Talk about a match made in heaven. Maybe it's because I tried this first but it ended up being my favourite flavour. I tasted the Creme Bologna next, which has an egg yolk base and special aroma (made by La Macelleria) of lemon peel and vanilla. I don't normally like fruit in frozen desserts but when made creamy like this, it works quite well. My pistachio was left for last. By then, I was starting to second-guess my choice of 'medium' because my stomach was stretched to the point of hurting so I don't think I got the most out of this last flavour. I could tell it had a lovely, rich pistachio taste and when Jenny tried it the night before, she really liked it too. 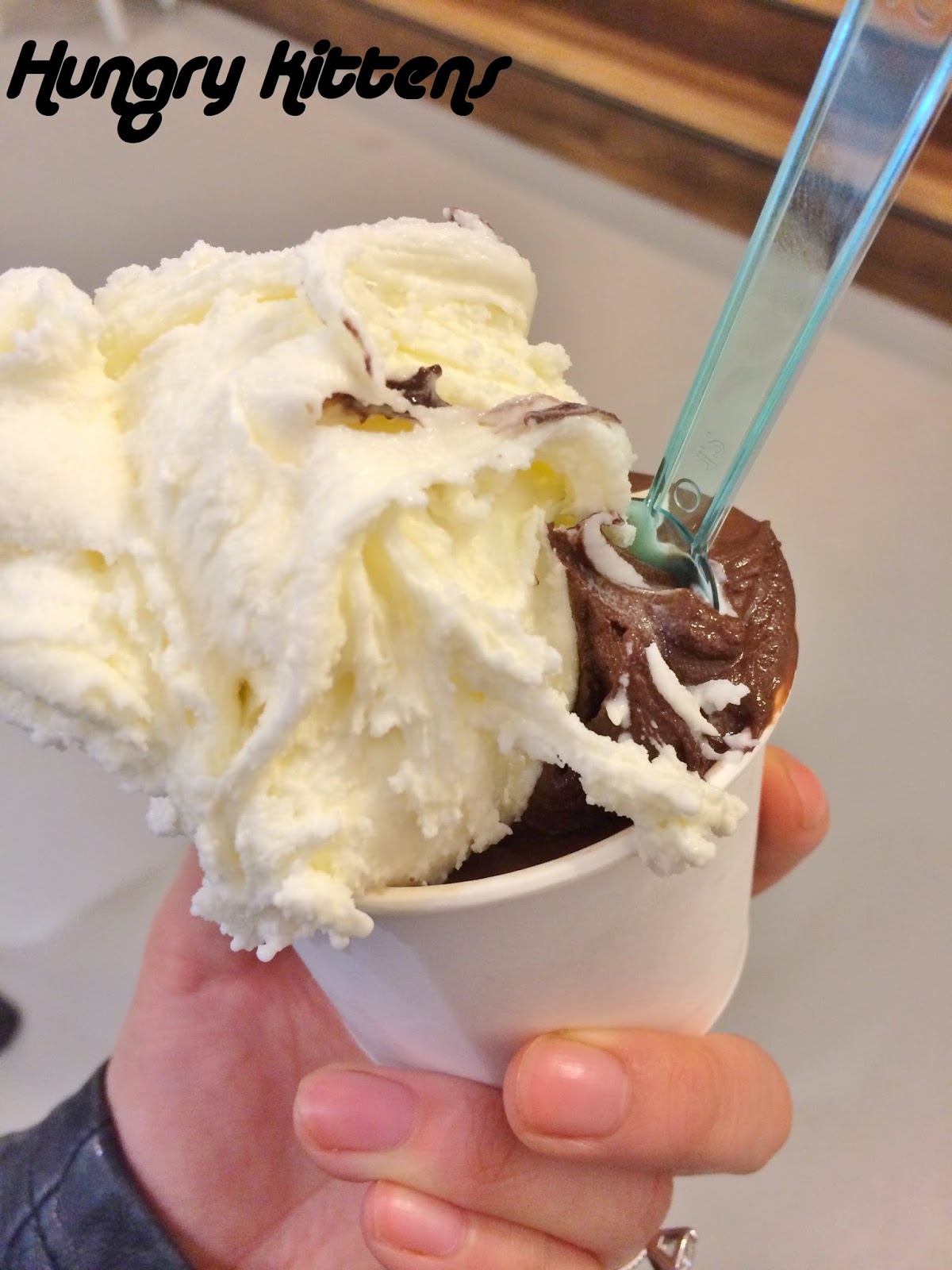 Marc's pick of flavours included the cioccolatto (chocolate) and fior di latte (fresh milk). He said the flavours were authentic and the texture of the gelato was wonderfully creamy.

I did think the gelato started tasting a tad too sweet about half way through. That might be a lesson to not order an extravagant amount next time. Otherwise, the flavours were good, service was speedy and friendly and the texture was authentic enough to bring us memories of our indulgent gelato-filled Italian holiday.

Labels: Casual Dining, CBD and Surroundings, Dessert Out, Dining Out