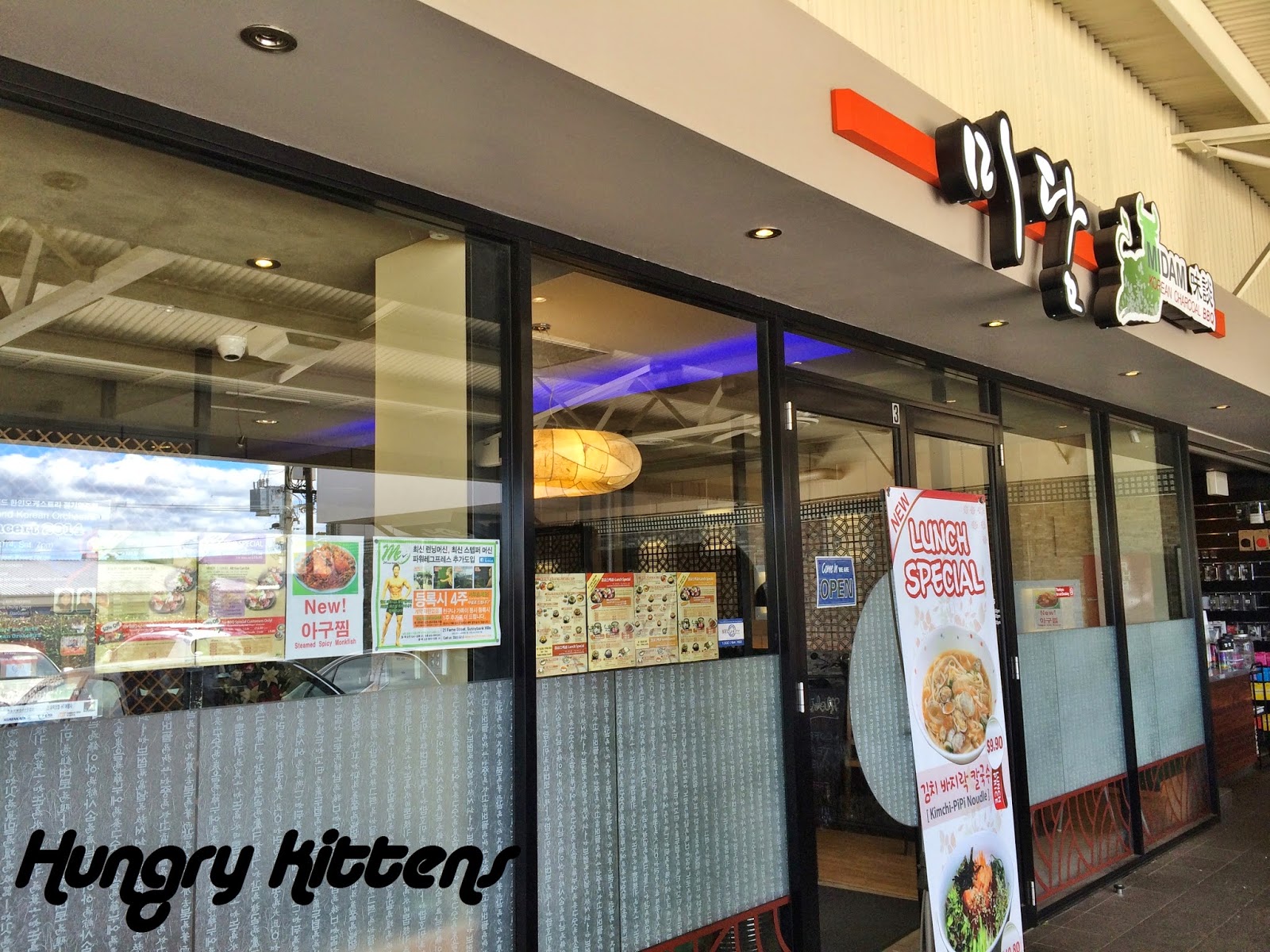 Maybe I'm becoming a bad daughter but I feel like I hardly get to share a meal with my folks these days. We used to do it almost every weekend but I find that my weekends are now getting cluttered with a mix of work, chores and social events. Last week, dad and I shared the same day off today so we ended up catching up with my grandparents over lunch. 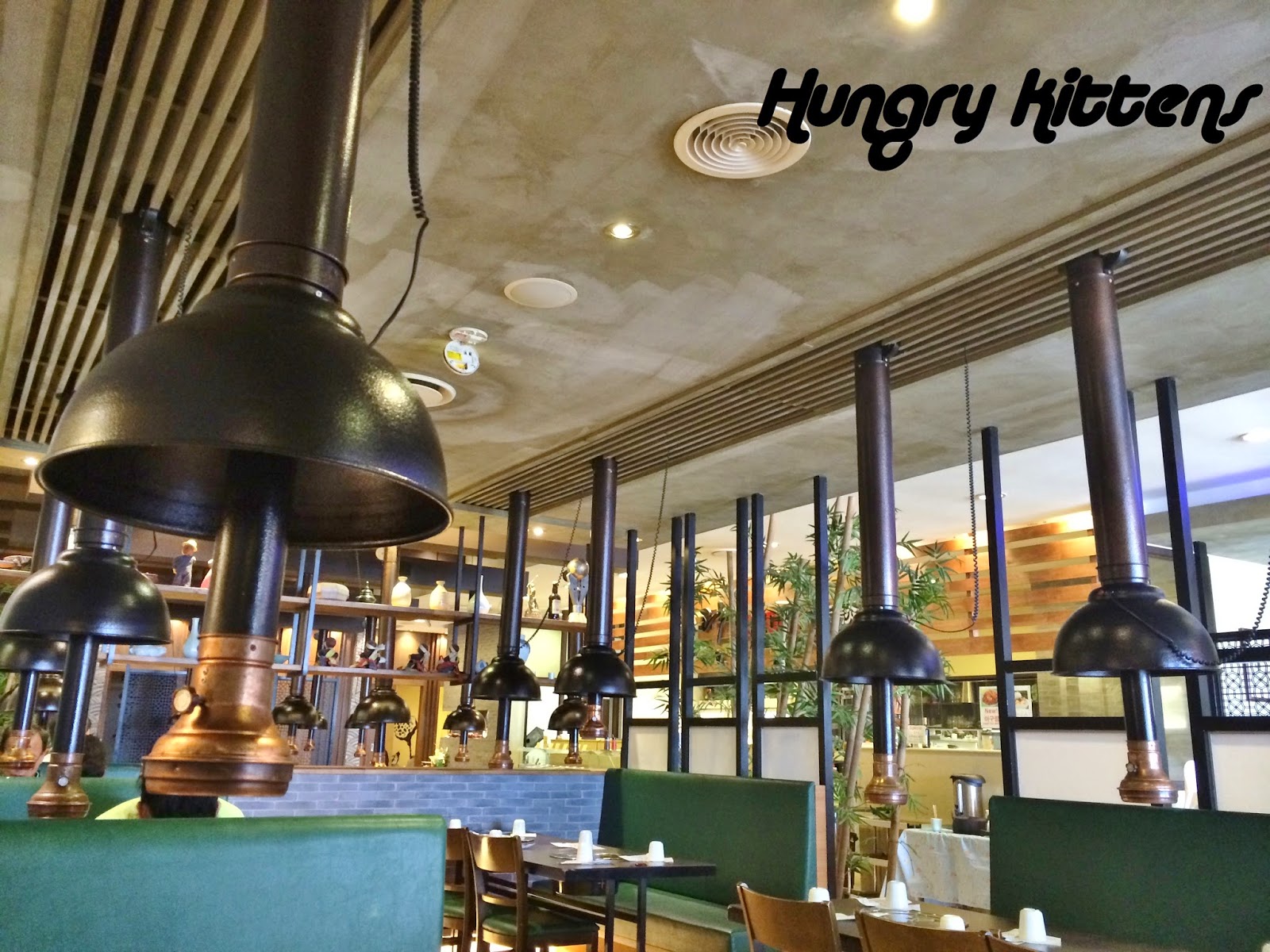 They originally wanted to try Sakura in Runcorn because I've mentioned how nice the sashimi is there. Unfortunately, it's only open for lunch on Friday, Saturday and Sunday so we had to find an alternative. Out of the blue, my dad mentioned Korean and I jumped on that because I'm ALWAYS in the mood for Korean.

When Marc and I want Korean food, we tend to go for Hong Depot or DoDoMi because they're close to our place. It was great then that I got to try a new restaurant because we were already in the Southside. Dad drove us to Midam because he'd been there a few weekends ago for hotpot and liked the environment.

The restaurant is located in the same complex as Sichuan Spice Chinese Restaurant. Unlike its neighbour, it was much busier even though it was just Wednesday lunch. Our group decided not to get BBQ and we were seated in a nice booth. 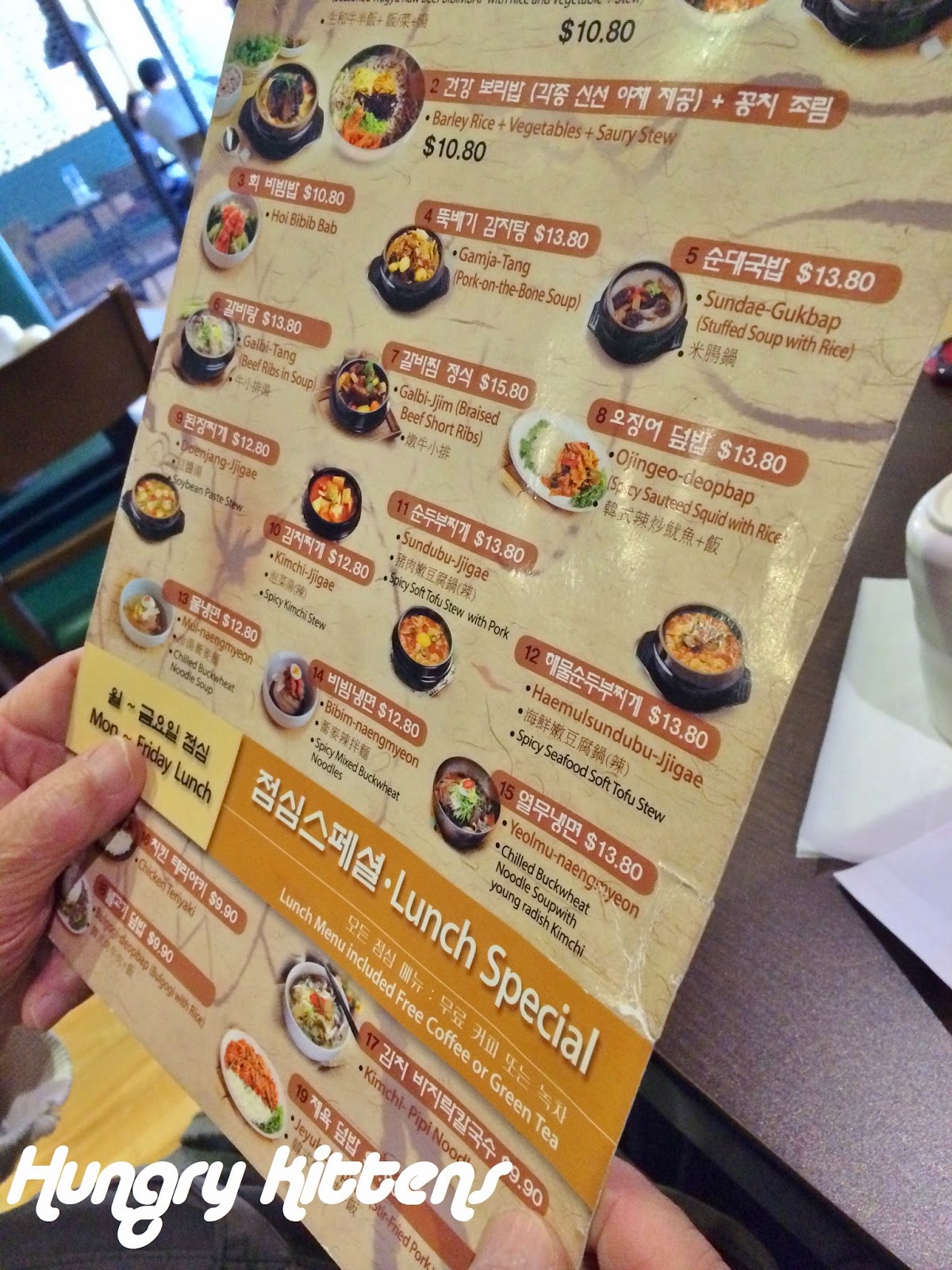 There is a lunch special menu and a separate menu book with the full range of options. I think everyone got a bit overwhelmed because there was so much food to choose from. My grandma and grandpa ended up just copying dad and me respectively. We also ordered a spicy lamb stew to share. 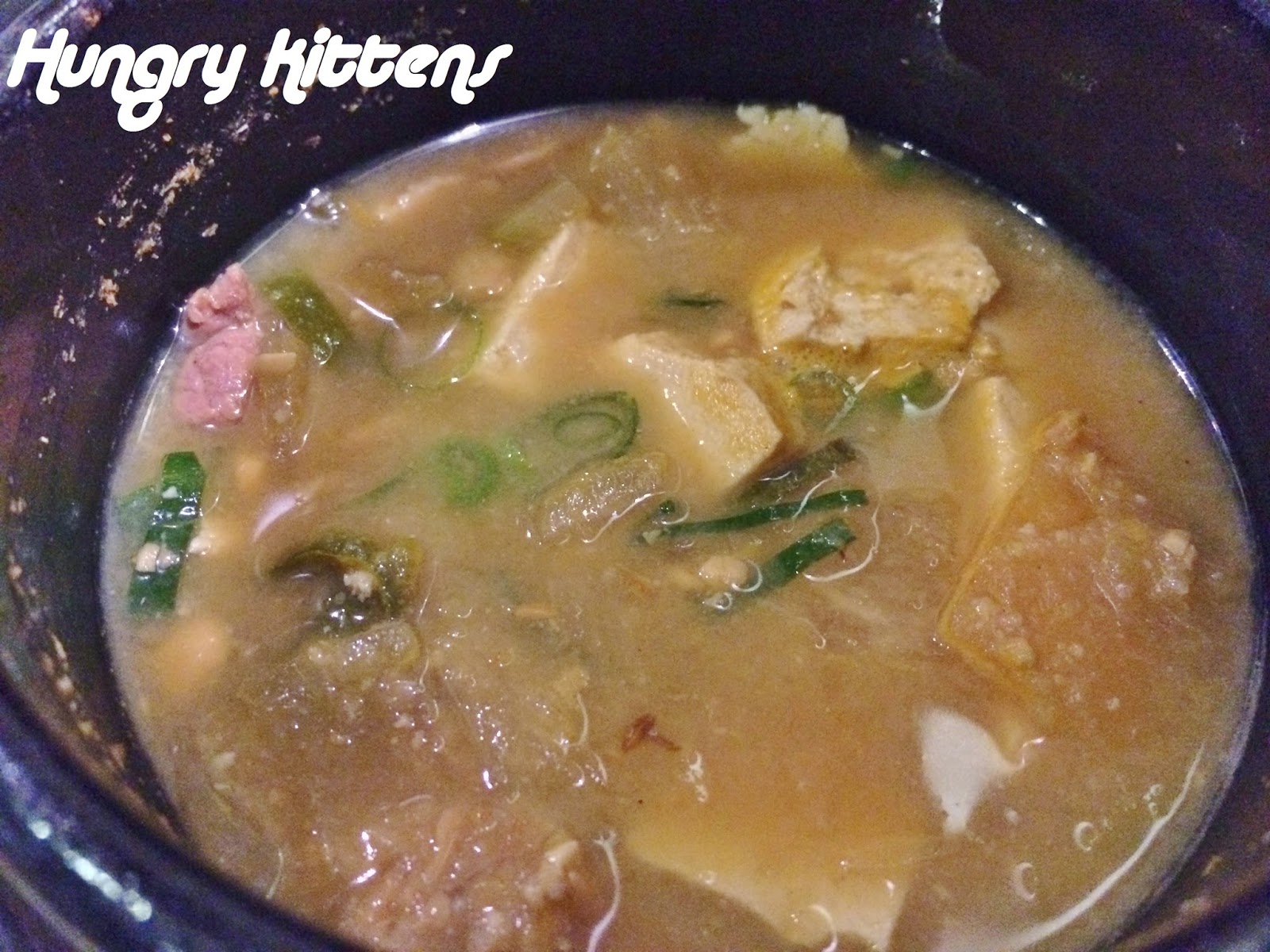 My pick of the day was the wagyu bibimbap set. It arrived with a bowl of miso soup that was more loaded than the Japanese version. It had quite a bit of veggies and tofu. This soup was a tad too salty for me and I'm not a huge fan of miso flavouring, but my grandparents liked it. 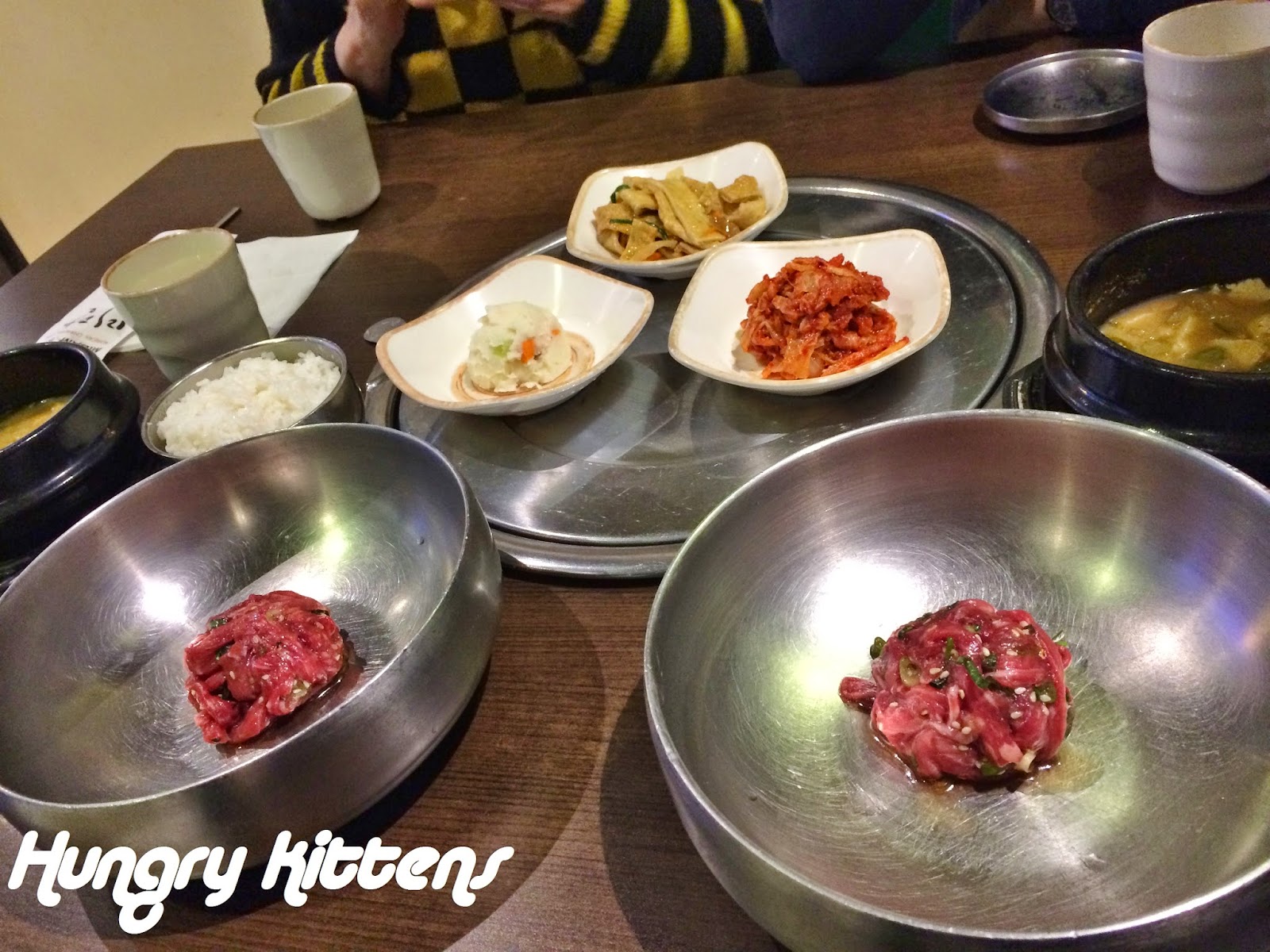 Raw wagyu for the bibimbap, with appetizers in the background

The bowl of raw, sliced wagyu beef confused me. My experience with bibimbap in the past, especially where there's raw beef involved is that it's served in a hot stone bowl along with rice and veggies so that when you stir it together, it cooks. We sat there waiting for such a vessel to arrive but after a while, we asked a waiter and he instructed us that there was a buffet table with ingredients for us to add and mix in with the beef. 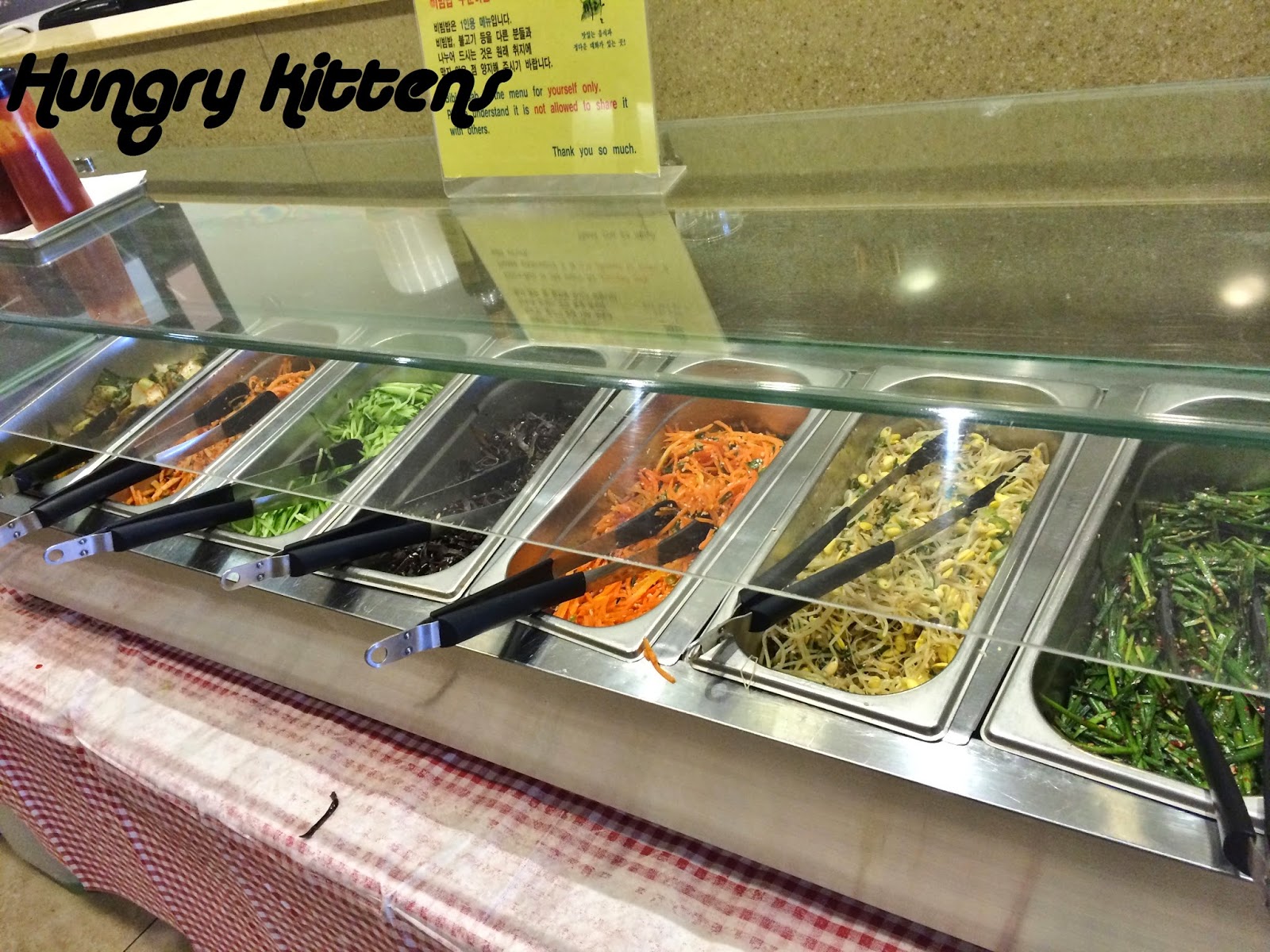 This bench was at the back of the restaurant and indeed, there was a lot of variety of raw and marinated vegetables, pickles, rice and pearl barley. I literally added a bit of everything and topped it all off with each of the three available sauces. My grandpa followed my lead, assuming I knew what I was doing. 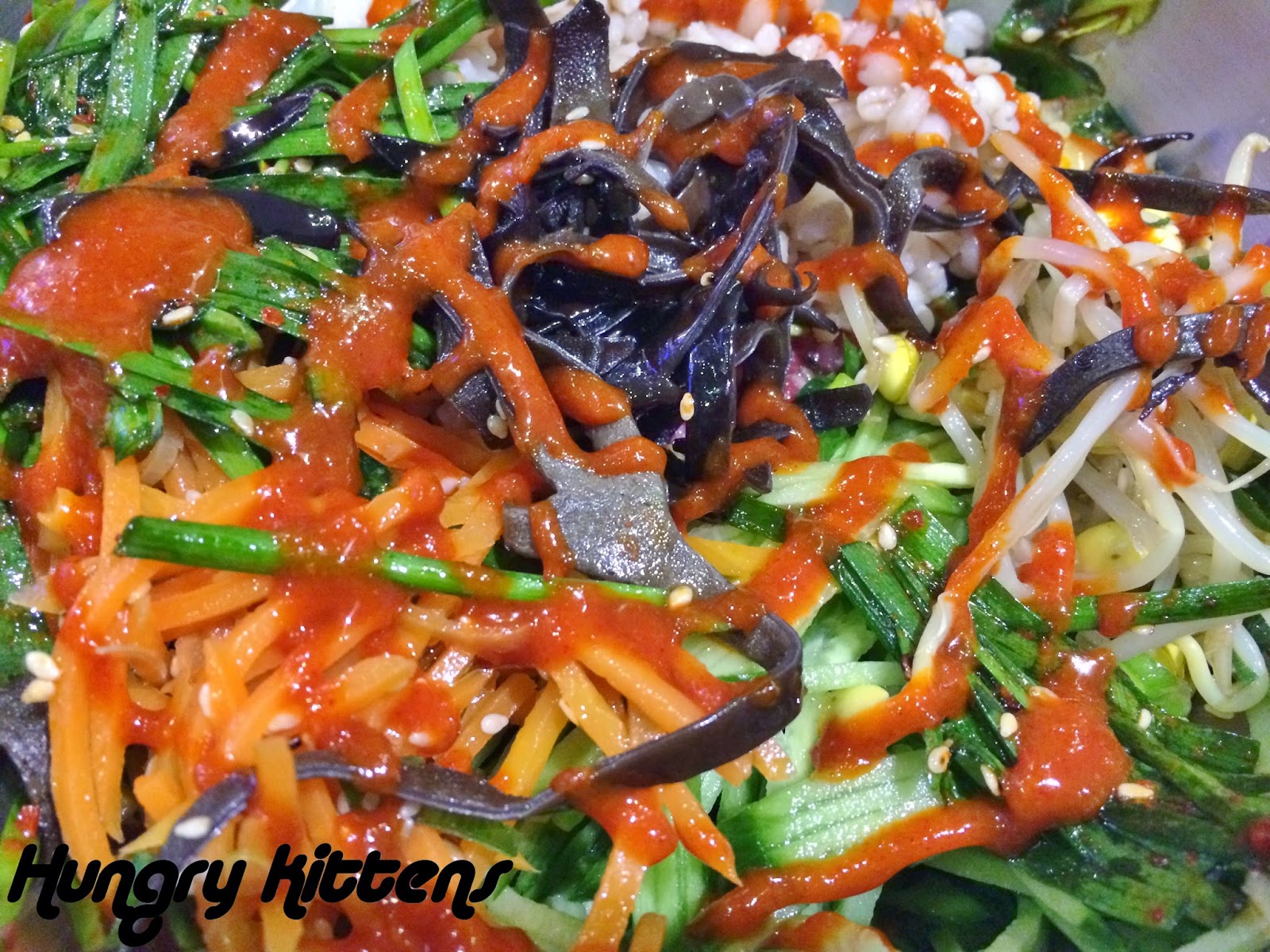 As you can imagine, when you mix all the ingredients together, it's all cold and the beef remains raw. Although I was wary about this, it tasted really good! It's kind of like Chinese cold-mixed noodles, which are great in summer. 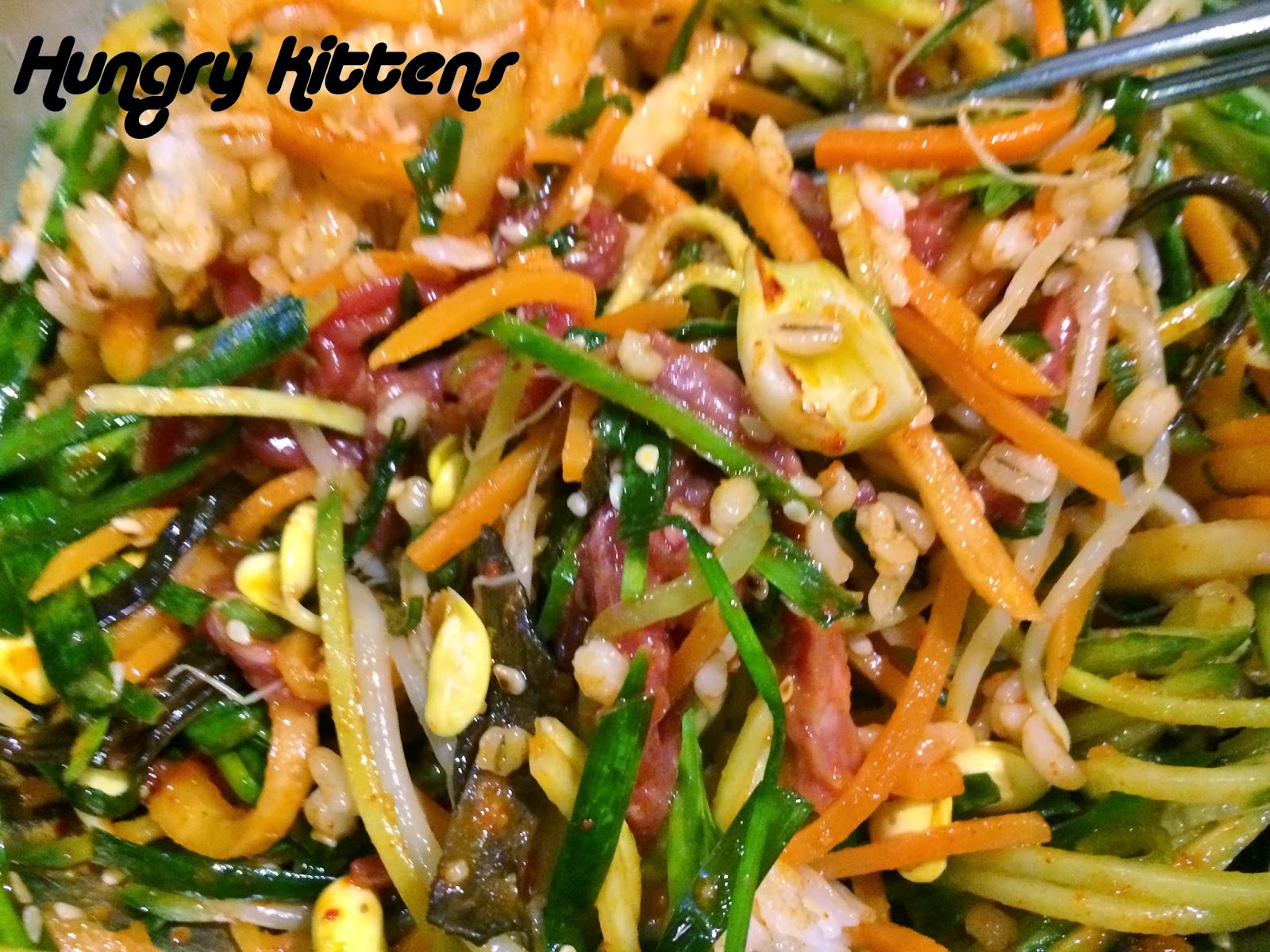 The veggies and various marinades and sauces come together to create a super flavoursome combination. The raw wagyu must have been a decent quality because it had to withstand being eaten pure and uncooked. It wasn't stringy or chewy at all. 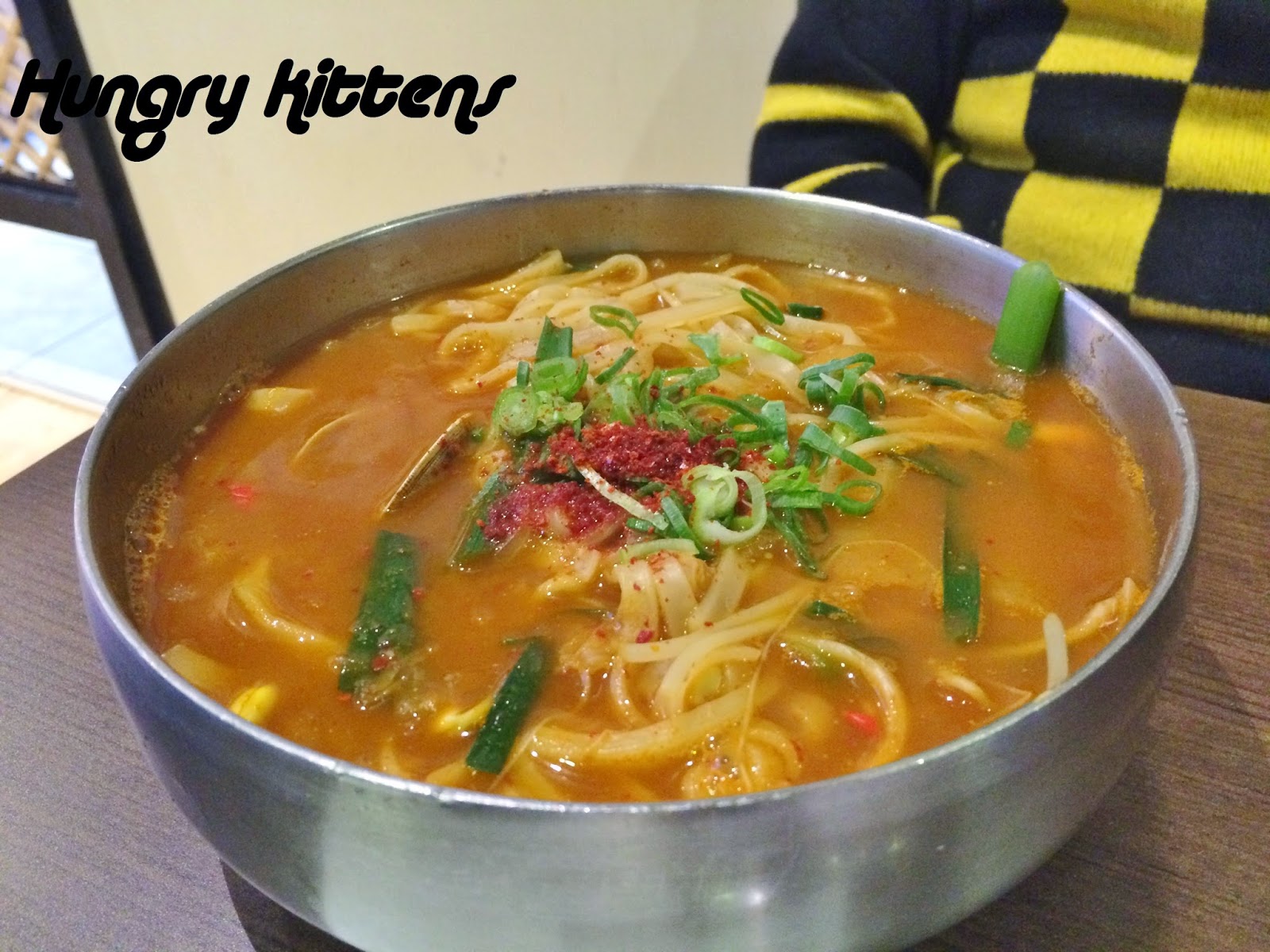 Dad and grandma ordered the pippi kim chi noodles. One serve arrived fairly early on and the other serve arrived about 20 minutes later. We ended up having to chase them up about it. I believe there was a big group that arrived just a bit after us so the kitchen got overwhelmed. Midam were very apologetic about our wait and gave us a couple cans of soft drink on the house to make up for it. With the pippi noodles, I thought the soup was really nice (I had a small bowl to myself) with a distinct shellfish flavour and mild kick of spice. The noodles were thick, which my grandma liked but grandpa didn't. That's just a personal thing. My dad commented that the pippi themselves were the frozen type. 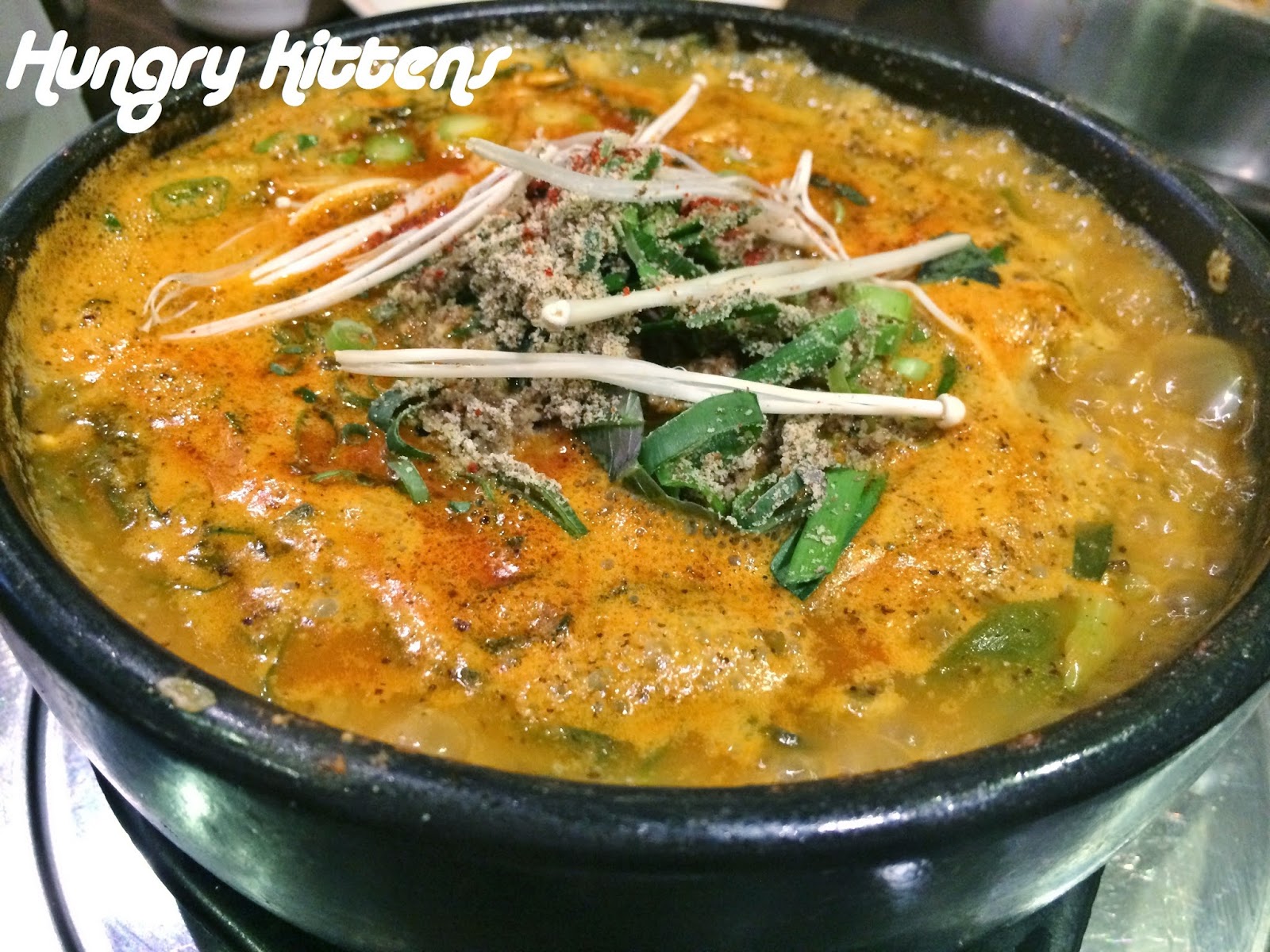 Finally, our spicy lamb stew came. Everyone was already full by this point so this was a definite excess in order but it looked so appealing bubbling away in the pot that we couldn't resist. I fished out a few pieces of lamb to try. They were really tender and just melted in my mouth. The soup itself was the typical Korean hot pepper paste flavour that I like, but dad (correctly) commented that many of the dishes taste like this.

We liked the food, environment and prices at Midam. It was such great value and the servings were huge too. The service was a bit frantic because they probably didn't expect it to be so busy but at least they dealt with it in a polite and earnest manner.