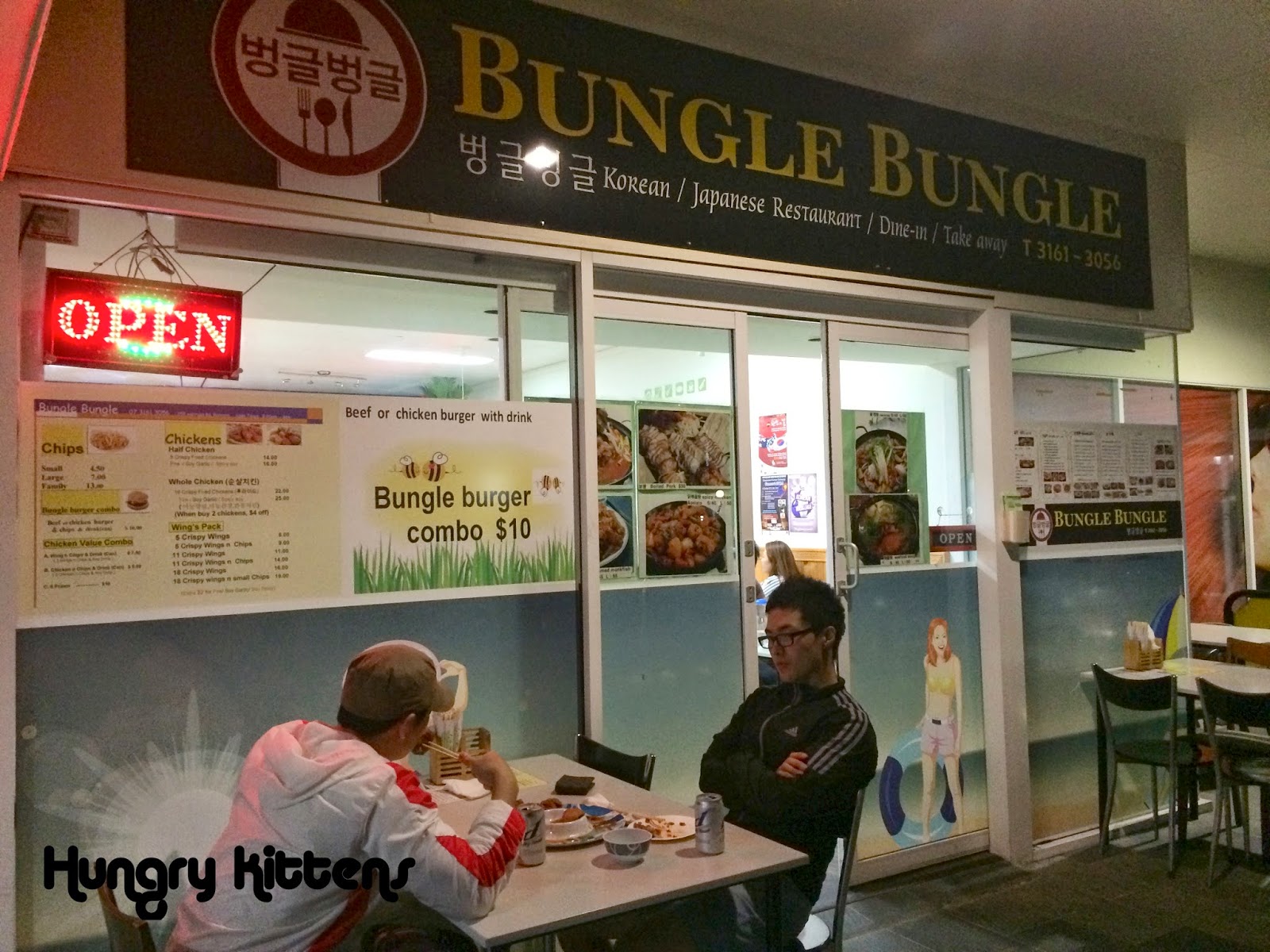 I've been very lenient with my Korean food cravings these days, allowing myself whatever I want whenever I want it. The exception has been Korean fried chicken because of my personal belief that no matter how much unhealthy food I eat, there's nothing quite as unhealthy as fried chicken. This month marks the end of my resistance to fried chicken, but only the Korean variety. I've realised (since Seoul Bistro) that this is the only case of fried chicken where benefit outweighs cost because it is just that darn delicious. 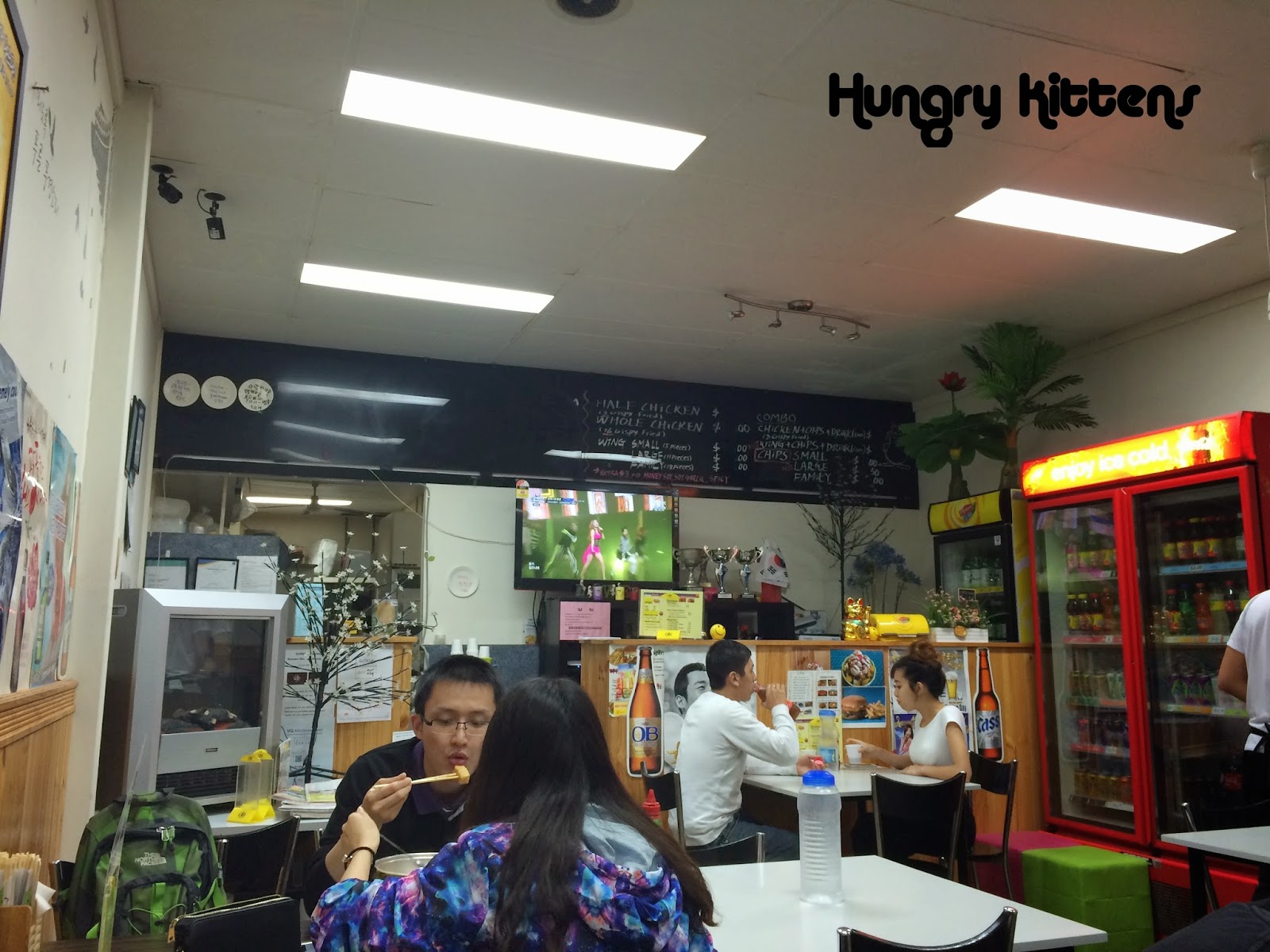 I discussed with Jenny which places we should try for Korean fried chicken and we are determined to make our way through the list. The first of our targets was Bungle Bungle, which Jenny had been recommended as the best Korean fried chicken outlet by some other friends. I can't remember where I saw it but one online testimonial I read claimed that Bungle Bungle "is not just a restaurant, but a way of life". That sure hooked me right in. 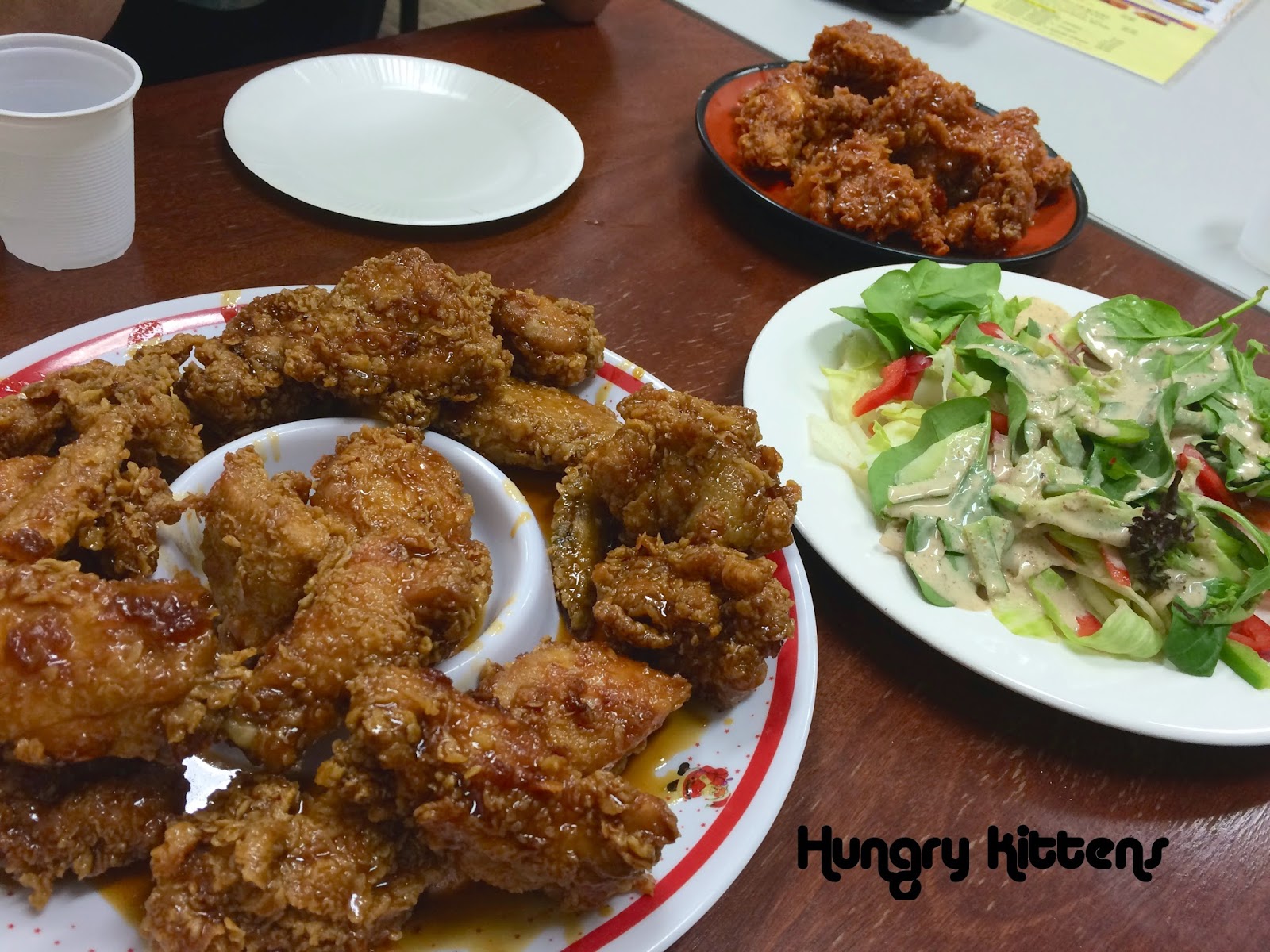 We thought that this would be more of a takeaway shop than a restaurant but it actually is a full fledged restaurant (albeit a small one) with plenty of indoor sitting space. Of course you can still get takeaway as an option. 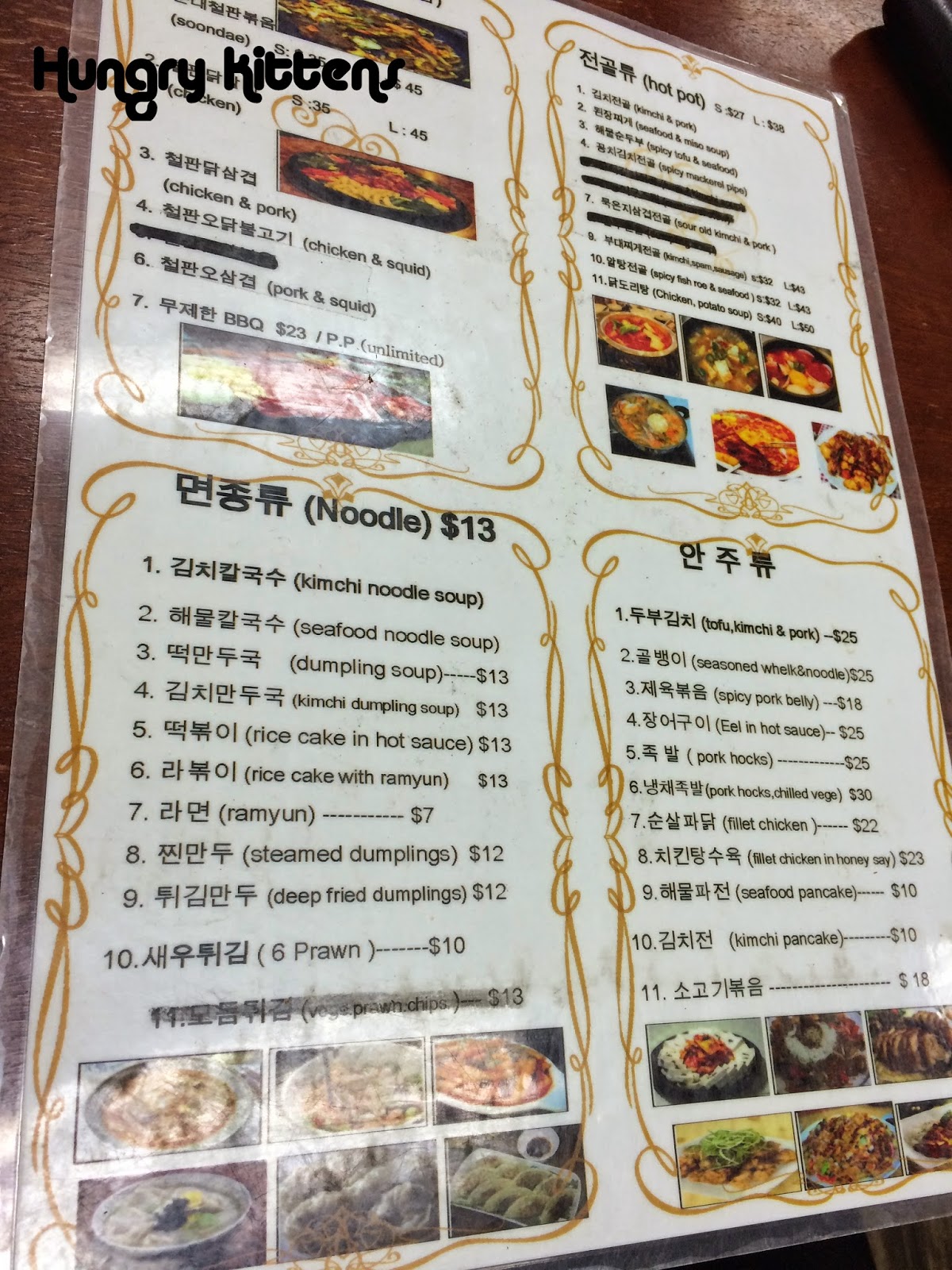 The menu contains other simple Korean dishes such as hot pot, noodle dishes and pancakes. The shopfront also claims 'fish and chips' so I assume they do that as well. We were there with one thing in mind, and that was fried chicken, so we focused our order around that. 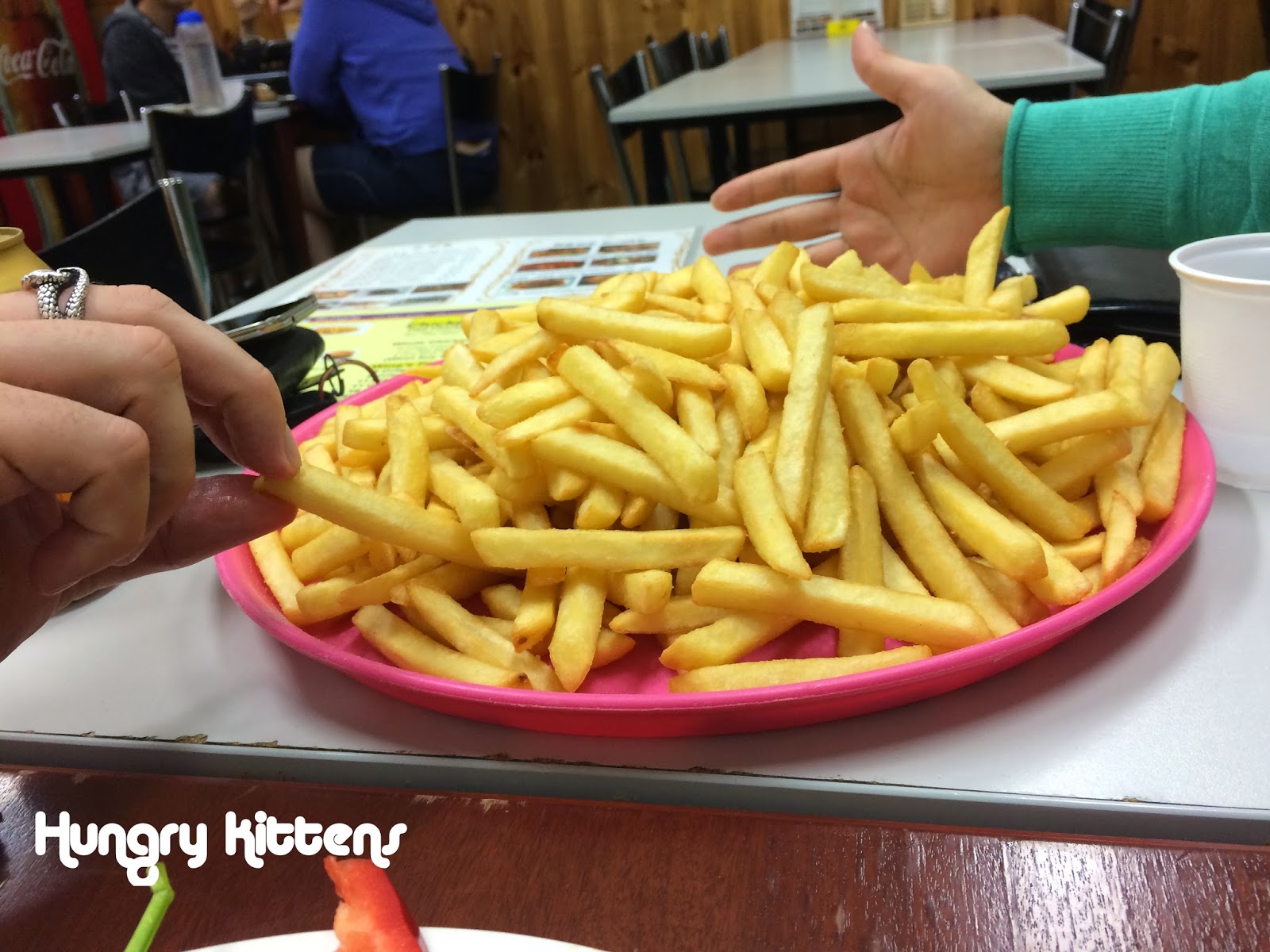 Between the 4 of us, we ordered one and a half whole chickens, a garden salad and a family sized chips. I will say right now that we over ordered and probably should have just gone for large chips because the family size could have easily served a family of 6-8. It was such a big mountain of chips that I requested my dinner guests to put their hand next to it to show you all just what were facing.

There were 3 flavours of fried chicken (plus an unflavoured version that we didn't even consider): fire, garlic soy and spicy soy. The two boys at our table are spice-fiends so we ordered the fire flavour out of necessity. Garlic soy was our other choice. 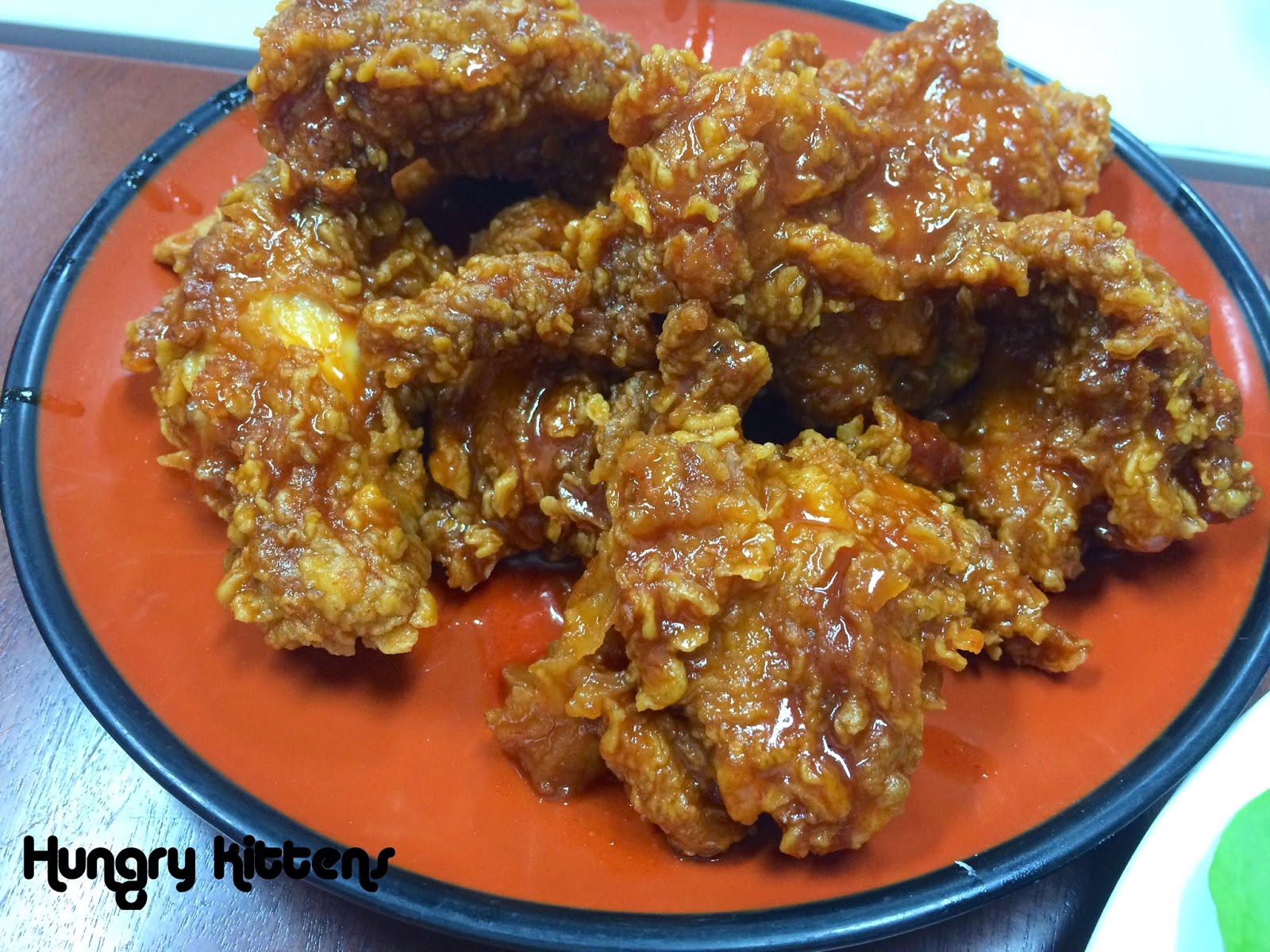 I actually enjoyed both flavours that we ordered but would lean towards garlic soy as my preference. Each piece was freshly fried, piping hot and very, very crispy. From what I could see, the chicken is fried first before being tossed in the saucy flavouring. 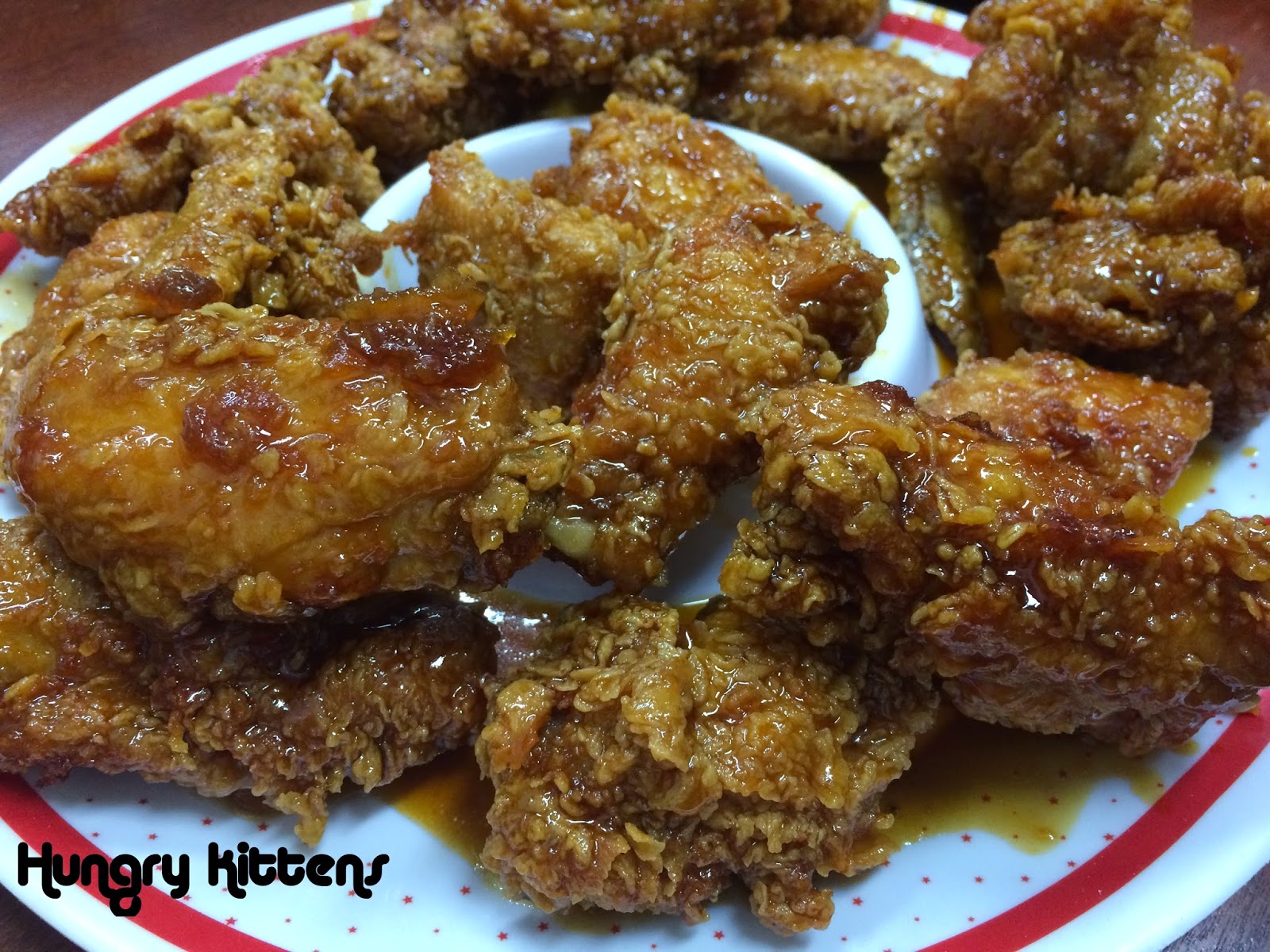 Both sauces were finger-licking good with just the right amount of sweet, sticky and salty. I love this stuff so much. It's the perfect compliment to icy cold beer and you'd be pleased to know there is Korean beer available on the premise. Marc and I had a can each and I don't know if the waiter felt sorry for Hien and Jenny because they were beverage-less (not counting our table water) or if it was because we ordered so much but they were each given a complimentary grape soda. 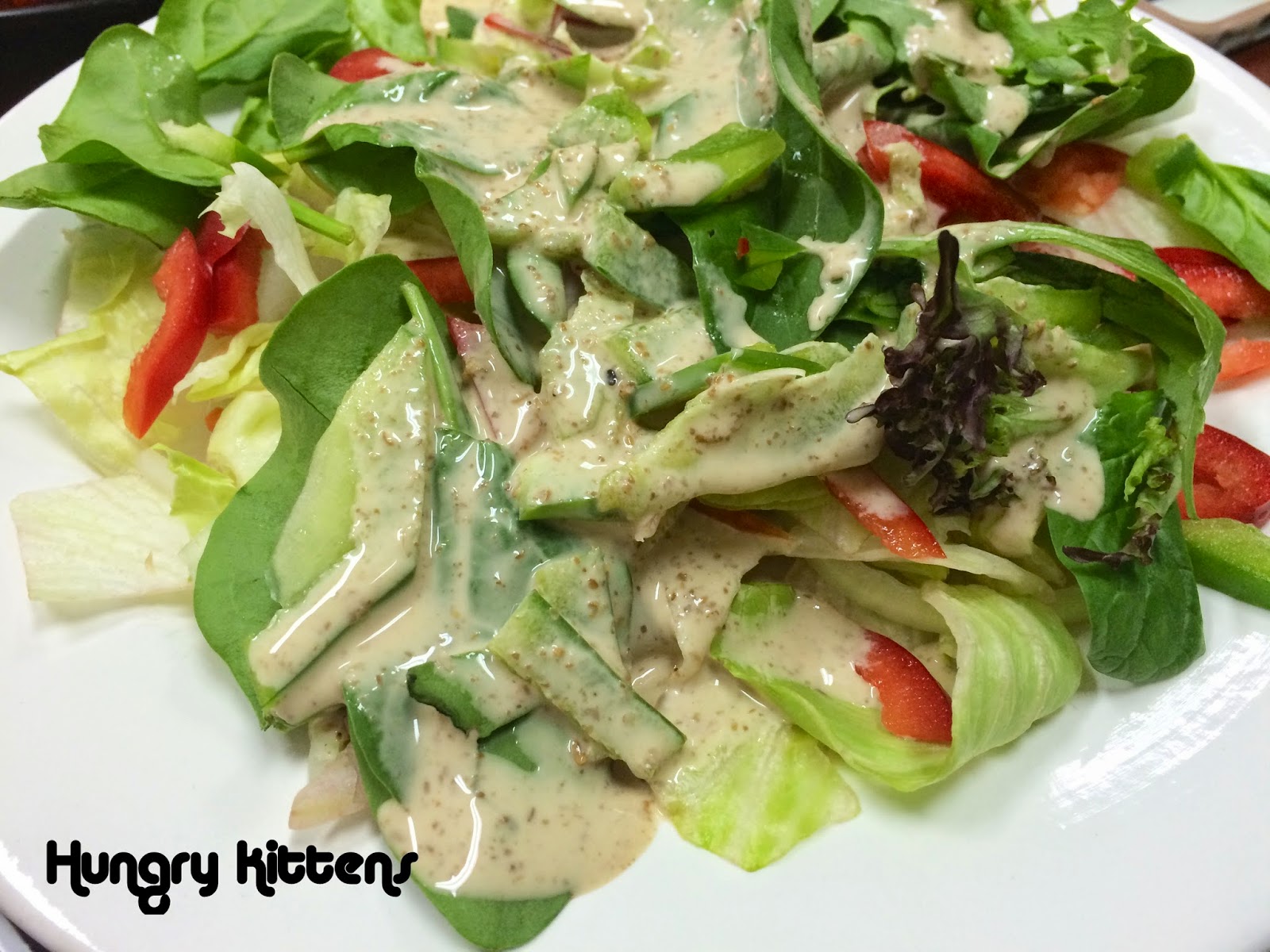 The garden salad was surprisingly good. I loved the sesame dressing, which Jenny informed me can be purchased at any Asian grocery store. As nice as this dish was, the chicken was much more interesting to me.

We all very much enjoyed our fried chicken from Bungle Bungle. I saw many negative reviews online about the poor service but we didn't experience that at all. Our waiter was nice, our food arrived promptly and we had smiles all round. I only wish it wasn't so far away from where I live, but going by my lack of personal control when it comes to Korean fried chicken, that's probably a good thing.