Birthday Weekend in Sydney Day 2 - Lunch at The Australian 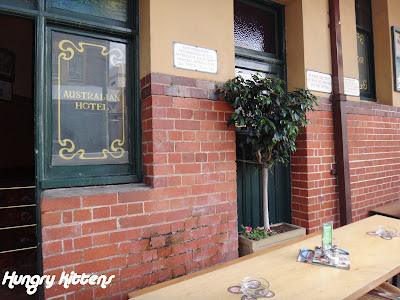 Marc took me to Toronga Zoo for my birthday and we had a wild (intended pun) time strolling along, snapping photos of animals and observing their odd behaviors. It's great on a day that I'm reminded I'm getting older (birthdays are no longer as innocent to me as they used to be) to feel like a child again, excited and rediculously energetic. 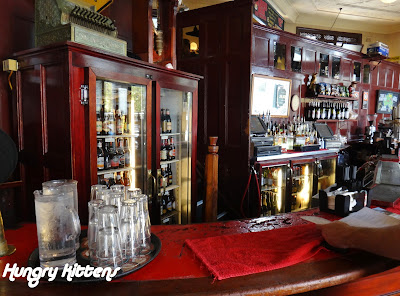 By the time we finished, our scones from The Tea Cosy had digested and we were starving. Walking and animal-spotting seems to be a high kJ-consumption activity! We were very keen to get back on a ferry for lunch. 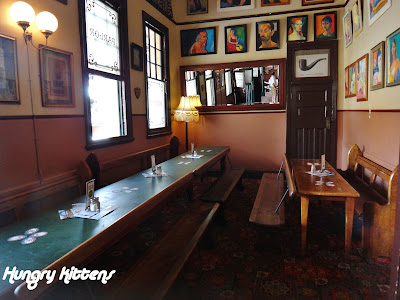 Marc had a cruelish plan in store for me. What better way to top off a trip to the zoo than we a feast of Australian animals? He had been bragging to me for a long time about the pizzas at The Australian Hotel, many of which are topped with native Australian wildlife. I'm not at all squeamish about eating the likes of kangaroo and emu but there's a wicked irony to devouring them back-to-back after a zoo excursion. 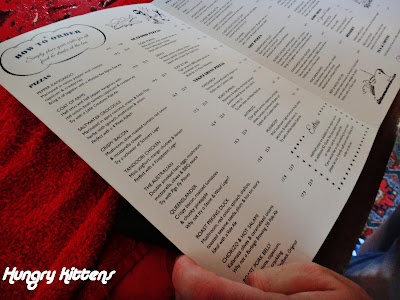 The Australian is an iconic hotel located at The Rocks. It's a large building and we ordered at the bar and took up a table outside. The weather was absolutely georgeous this day so we wanted to soak it up. 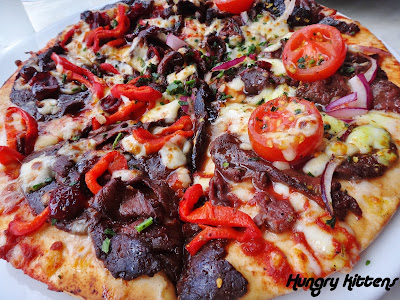 Coat of arms pizza - with half emu and half pepper kangaroo, with red onion, bush tomato, capsicum and cranberries

We ordered 2 pizzas to share. I thought we may as well make the most of the theme eating by getting 2 animals on the one pizza - the Coat of Arms provided just that, with half the pizza topped with emu and the other half with kangaroo. As well as these main proteins, Australian flora was represented by bush tomato. I found the pepper kangaroo half to be too sweet for my palate. The emu was very strong and gamey, much more like turkey than chicken. 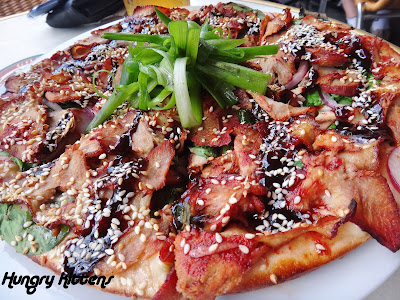 The other pizza we tried was one that Marc had been raving about for a long, long time. It strayed from the Australiana theme and featured oriental flavors in the form of Peking duck. Some elements of traditional Peking duck were present (the roast duck meat, sweet hoisin sauce and shallots) but there were also more pizza-ish additions such as mushrooms, red onion and spinach. The spinach really bothered me because it had an odd flavor to it but Marc basically said I was crazy. 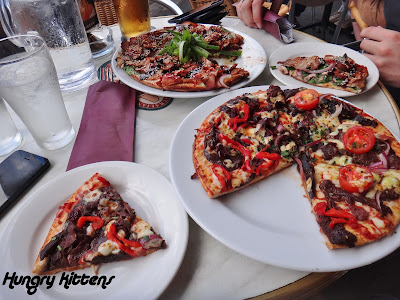 Everything else was delicious, evident by the fact that I ended up eating 6 slices of pizza in total, equating to one whole pizza. I don't think I've done that since my highschool years. The toppings at The Australian were special and I quite liked the thickness of the base too. They are in no way shape or form ressembling 'traditional' Italian pizzas but they don't try to be either.