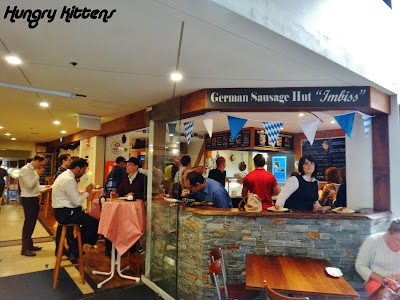 I'd only seen the German Sausage Hut closed from the outside when I walked past it either early in the morning or late at night. I was curious though... Was it a pub? A fast food joint? A german bistro? It turned out to be a mix of all three. 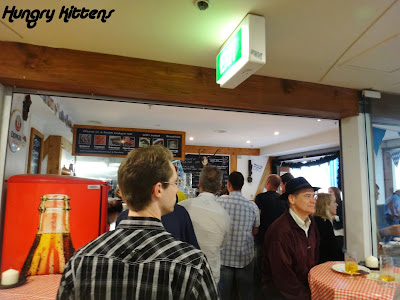 Marc and I went there for lunch last Friday. German Sausage Hut is located in Burnett Lane, next to Super Whatnot. For a brief moment, I considered going there instead because I'd always been curious about Super Whatnot, but the continuous flow of people walking around us with juicy looking hot dogs swayed us.


German Sausage Hut was very busy around lunch time. Many people just got takeaway sausages in bread but there were a few tables and benches with city folk having a sit down meal. We were lucky enough to secure one of the last tables. The Sausage Hut has a fast food vibe because the food is served fast and because so many people walk off with a takeaway purchase, but the presence of beer and high stools provide a pub ambiance too. 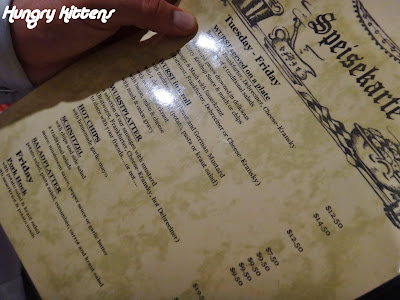 The menu contains varieties of sausages in bread with different toppings/accompaniments,  sausage plates with salads, and on Fridays only, a pork knuckle. Marc chose a bratwurst in a roll whilst I had a frankfurter on a plate with pasta salad and potato salad. There's a sauce station near the counter with cutlery, tomato sauce, mustard and BBQ sauce. 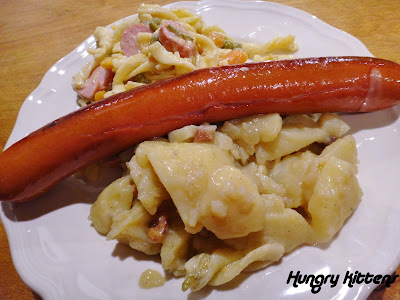 I was really amused with my plate not least because it looked funny. I had picked a sausage on a plate with 'salads' thinking it would be a healthy, low-carb alternative to getting the roll. It seems I couldn't avoid carbs this meal because pasta and potato salad is as carb ladden as it gets. Marc explained the other salad options appeared to be plain carrot and plain cabbage and he didn't think they sounded appealing at all. The frankfurter was deliciously juicy with a squeaky, crunchy skin. It was a top notch wurst! The side salads weren't bad either, with the potato salad jazzed up by capers and the pasta salad tossed through more sausage. Sausage with sausages on the side. Hmm... 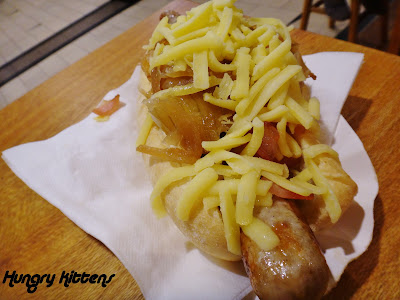 Bratwurst in roll - with onion, bacon and cheese

Marc battled with his wurst in a roll and made a right mess before resigning to the fact that he needed cutlery to eat it. Aside from the bratwurst, the roll contained cooked onion, lots of bacon and lots of cheese. He liked the sausage but thought the bread roll needed more length to accomodate it. 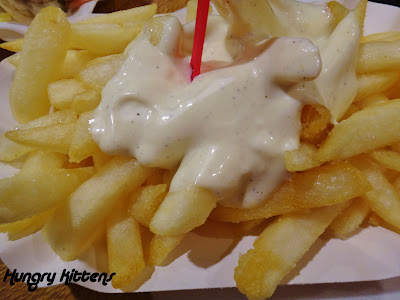 We complimented our meal with two tall glasses of Erdinger German dark beer. It was a nice match to the hearty food. Because there weren't enough carbs on the table (sarcasm), we also had a serve of hot chips. They were really good. I particularly liked the garlic mayo that was extra creamy with just the right amount of garlic. 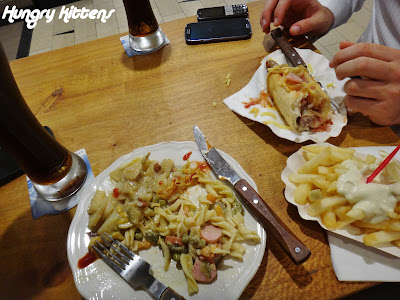 I would've liked something lighter to go with my sausage but then again, I am a wuss and I can't imagine any males making that same complaint. I have a feeling the wurst in a roll with sauerkraut would have been less filling and maybe a more appropriate lunch option for me. Don't get me wrong, the food was delicious but I suspect too many meals like that and I'll be in the market for bigger pants.