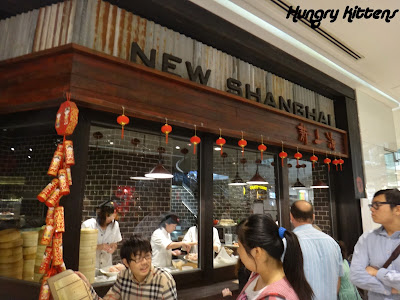 I haven't tried and failed to eat at a restaurant as many times as I have at New Shanghai. Every week for the past couple of months, I made plans to have lunch there, only to have it foiled by (in no specific order): long queues + impatient boyfriend, emergency sprints back home to Toowoomba, public holidays and severe food poisoning. Dad even made the joke that for us, New Shanghai was cursed. 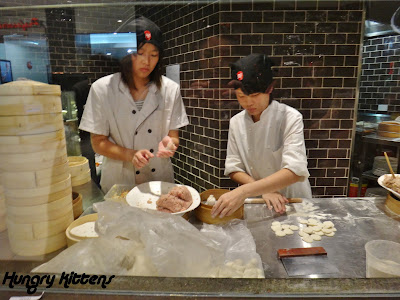 Mum and dad went by themselves when the restaurant first opened up and they had a fairly good impression of it. As the weeks went by, I saw more and more online reviews and blog posts pop up describing the food and experiences there. I started feeling a bit desperate and more than a tinge of regret at not going with my parents right at the start.


Last weekend, we finally made it to New Shanghai for lunch. We arrived just past 1pm and there was a massive crowd around the front entrance. Luckily I wasn't with Marc because he would have taken one look at that and refused to go near it out of principle. Admist the chaos, I couldn't tell what the queuing situation was because everyone was looking anxious and impatient. My mum is a sharp little thing and she marched through and grabbed a waitress to ask what we were supposed to do to get a table. It turned out that there's a ticket system so we got a number and waited.

After a considerable wait, we were lead to a table outside. I say 'outside' even though the restaurant is entirely on the basement floor (food court level) of Queens Plaza because the restaurant almost doesn't feel like it's located within a shopping centre and the tables at front do feel 'outside'.  Because of the way the wooden partition (between inside and outside) was angled, I couldn't get any photos of the inside of the restaurant but from what I could see, it had a nice decor. 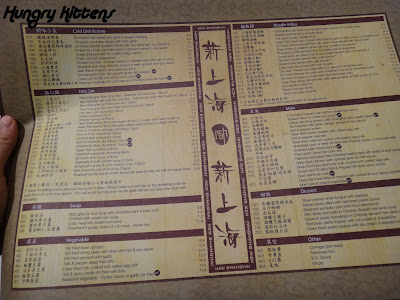 We had already studied the menu when we were waiting. There are lots of dishes on offer, with plenty of smaller dim sim dishes like dumplings and pastries, cold entrees/appetizers, rice dishes, noodle dishes, soups and hot dishes meant for sharing. I let mum and dad choose and they went with a bit of everything for me to try. From what I know, signature dishes at New Shanghai include the mini steamed buns (xiao long bao), pan fried pork buns and shallot pancakes. Mum said that they tried the xiao long bao last time and it was only average so they opted not to order it again.

It was a real task trying to get the attention of a waiter to take our order. Since we were seated 'outside', we had to wait for someone to wander out by chance as they were putting dishes down for neighboring tables and then holler for them to come over. We had to repeat that ordeal to get some water for our table. 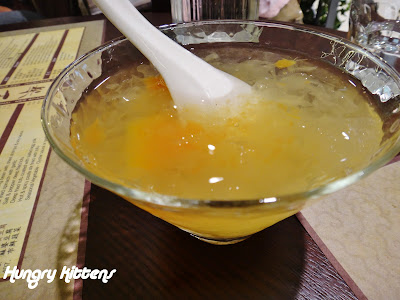 The first dish that was put down was what I think of as dessert; the slow cooked white fungus and papaya. This isn't my kind of dish and I'm not in the habit of eating something sweet first up in a meal. I figure my parents just ordered it for variety sake but expected it to come at the end. It wasn't as bad as I imagined though. White fungus pretty much has no flavor but a light, delicate texture. The soup thankfully wasn't a sugar syrup, and it was chilled and refreshing. Mum kept reiterating that white fungus is good for women and preserving nice skin. 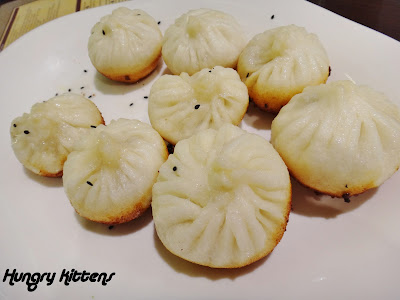 Next, the pan-fried buns arrived. Once again, we found ourselves in the position of having to grab a waiter, this time because we had no cutlery. After a long period where a) no one came to our table and b) after someone came, no one remembered to bring our cutlery, I got impatient and just grabbed one with my hands. 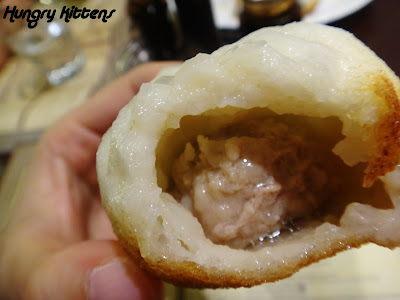 Inside of pork bun

The pan-fried buns are yum, with plenty of piping hot soup inside (not so good when you're eating with your hands), a tender gingery meat filling, puffy exterior and crisp base. Mum was critical about the fact that they were all different sizes but I sort of liked that because it shows they're hand made. 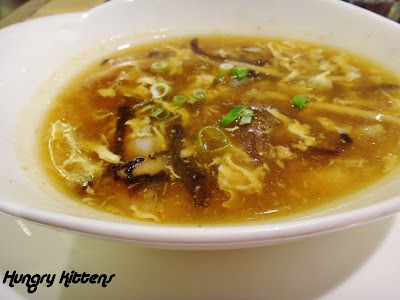 I wanted to try the hot and sour soup because I love soup and that's one of my favorite Shanghai classic dishes. Mum makes an excellent version. The one at New Shanghai was too sour and not enough hot for me. Granted they're not supposed to be extremely spicy but my idea of a good hot and sour soup has a punch of pepperyness that this lacked. The contents were quite thorough, with shitaake mushroom, bamboo shoot and and even prawns. Mum didn't like the addition of prawn (a non-traditional ingredient) because she didn't think it matched the other flavors. 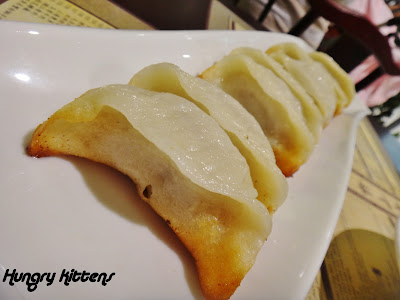 We got our cutlery in time for the arrival of our next dish, which was the pan-fried dumplings. Mum was concerned that this would be too similar in style to the pan-fried buns. Dad said that the two were basically the same (same filling, same crispy base and both containing soup) but the bun uses a rising agent to creat a puffy exterior but the dumpling just uses a flat, non-rising skin. We all enjoyed these very much so mum's concern was unwarrented. It seems that there is no such thing as too much crunchy, soupy dim sim. 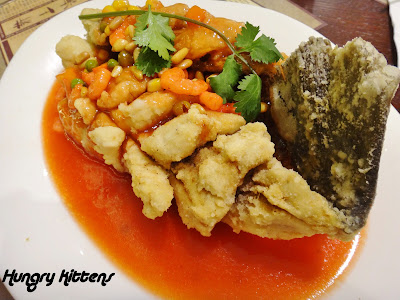 The first of our larger, hot dishes was the deep fried barramundi with sweet and sour sauce and pinenuts. This is another dish I love to order when I'm in Shanghai. Traditionally, it's made with a whole mandarin fish, topped with a sweet and tomato-based sauce and toasted pinenuts. The barramundi was cooked really well. It was crispy and completely boneless, which is unusual for Chinese-style cooking but I guess tailored for Western diners. It is also great for me because I hate picking out bones! The sauce was a disappointment though. It was too one dimensional and had a straight-out-of-a-jar sweet and sour flavor. Overall the dish wasn't bad but it was saved by the fish... the sauce could definitely do with some tweaking. 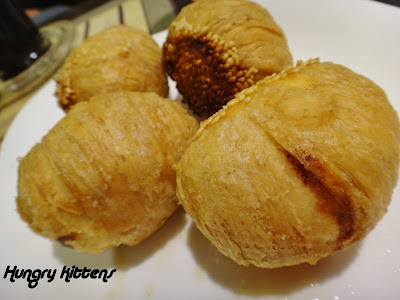 Two more plates of dim sim were brought out next. The first of these was our deep fried radish pastries. I was full by this point so I just nibbled on half. 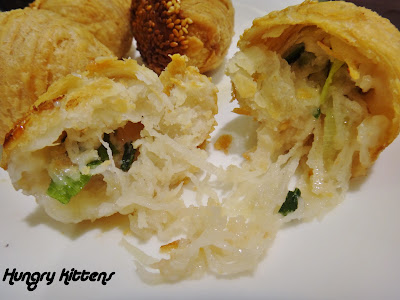 Inside of white raddish pastry

The pastry was short and crumbly and nicely complimented by the moist, shredded raddish filling. The ham in the filling gave it a good flavor too. 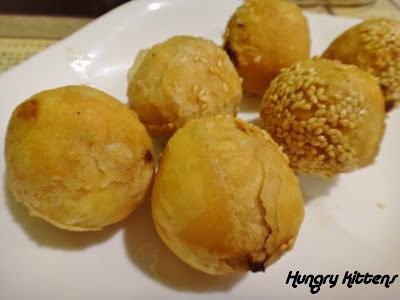 Deep fried pastry with ham and shallot, coated with sesame

Our other dim sim was plain ham pastry. It was very similar to the raddish one so I don't recommend ordering both. 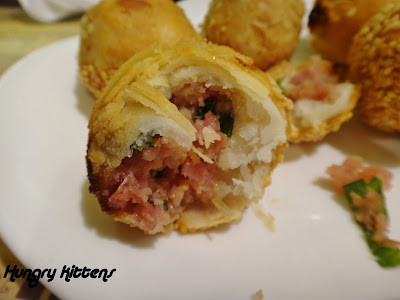 Inside of ham pastry

Of the two, I preferred the raddish pastry because the ham filling was too dry in combination with the very dry pastry. Because the pastry here wasn't flakey and as layered as the raddish one, it tasted even more dry. 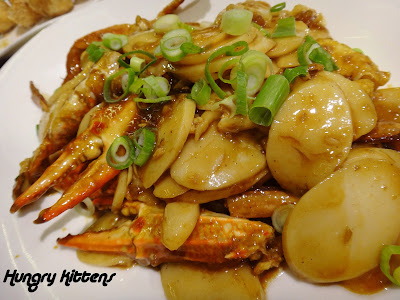 The final dish of this epic lunch was the stir-fried Chinese rice cake with blue swimmer crab. I haven't tried a dish like this before and I wasn't impressed to start with but it grew on me. Rice cake is called 'nian gao' in Chinese, meaning 'year cake' i.e. something to have at new years. My family normally makes it stir-fried with pork and wombok. After a few bites, I started to like the subtle crab flavor that went into the rice cake. This dish was still a challenge for me though because I can't eat unshelled crab meat (due to braces) and I don't eat rice. Having nothing but big pieces of rice cake is not too different to eating lots of rice so I only had a little bit before it felt too filling.

I have mixed feelings about New Shanghai. On the whole, the food was fairly good and the menu contains quite a few authentic dishes. I like the decor and the concept of the restaurant but its popularity is a bit of a turn off. I get a Melbourne/Sydney vibe from it because of how busy it was the whole time we were there. The service was sketchy at best but at least our waiters weren't rude to us (which I had read online). They were disorganized but apologetic. I would recommend sticking to their signature dishes.