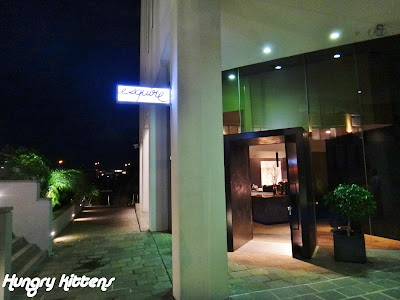 When you think about it, one year is truly a long time. In the past year, I've reached the milestone of no longer being in my my early 20's (not so good), started to get into the groove with work (a bit better), expanded my scope of overseas destinations (better yet) and purchased 2 houses (HORRAH!). 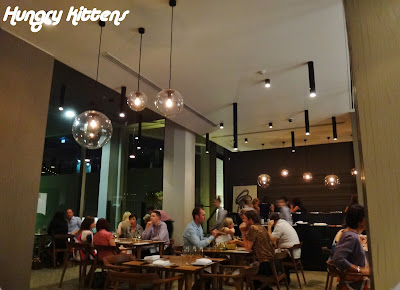 Looking back, the whole journey can be surmized as one thing: growing up. Yup, a year is a long time and thus, when Marc and I reached our one year anniversary, we thought it was an important occasion to commemorate, even though we're far from being hardcore romantic types.

I had freedom of choice for the venue and I thought "what better time to tap into my reserve of unvisited fine dining restaurants that we otherwise have no occasion to visit?" Esquires got the luck of the draw.


I recalled seeing the Esquire sign on the way back from another restaurant. It's really easy to miss; in fact, the whole restaurant is understated to the point of being almost camouflaged. Although Esquire is amongst the Eagle Street dining strip, it's tucked into a building, away from the hustle and bustle. Bistro One Eleven was another restaurant utilizing corporate space but it had more of a lobby/office feel whereas Esquire definitely felt like a restaurant once you stepped inside. 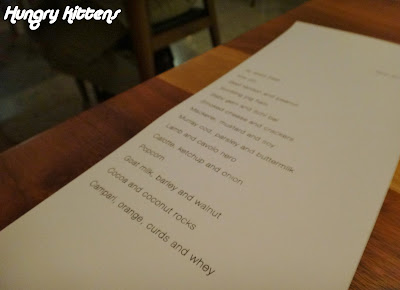 When we went, there was no stuffing around with orders. Everyone who dined at Esquire that night was getting the degustation. I had seen on the website that there were 2 degustation options, one with more courses, but that may be out of date because we weren't given that option. That was all fine by us because we hate thinking and for this type of eating, are more than happy to go with the flow. 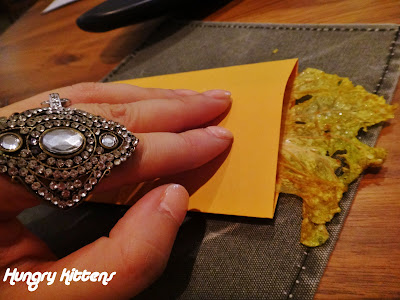 The appetizers that were brought out first were placed in a small paper envelope. We tasted air-dried kim chi and beef. I nibbled at the kim chi first and thought it was very tasty. Picture the sour and chili flavors of kim chi with a lightly crisp texture. Marc combatted my coment of "this is spicy" with a "it's NOT spicy" but he liked the 'tomato soup' flavor. It works really well and does get the juices flowing, which is what you want in an appetizer. 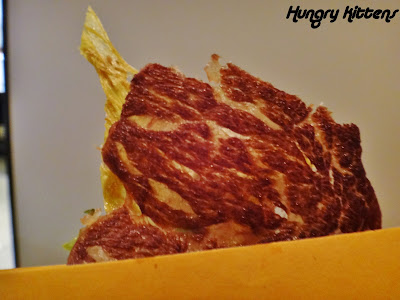 The beef was basically like beef jerky, one of my favorite snack foods. It was very thin though, so it had a nice crunch rather than the usual jaw-exerting chewiness that Australian beef jerky has. 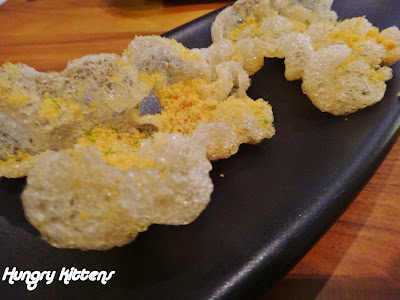 Our next appetizer was described as 'beef tendon and peanut'. I'm not sure how they cook the beef tendon but it was puffed up, light and crunchy, ressembling fine pork crackling. It was dusted with candied peanut, which had a distinct nutty flavor and slight sweetness. I loved that the beef tendon melted on the tongue to produce a gel. It was quite a textural experience. Marc found this course strange but I enjoyed it. 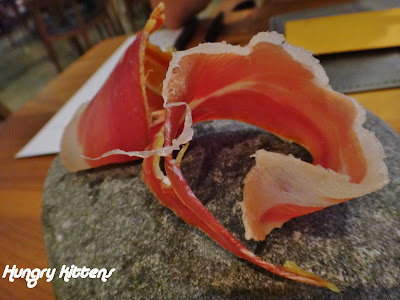 The suckling pig was a house-cured pork meat. I've tried a few varieties of 'fancy' cured pork from Ortiga and gourmet delis... I have to say, they all taste similarly good to me. I can only conclude that I'm not at all a cured meat expert. 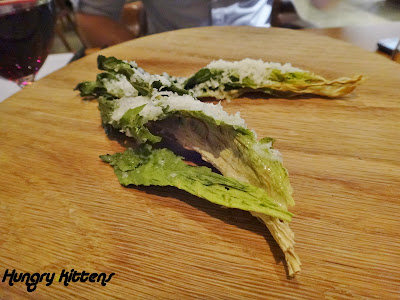 One of the most stand-out courses in terms of innovation was the baby gem lettuce. It was air-dried again (I have a feeling Esquire wanted to give their dehydrator a work out) with a strong, vinegar dressing and a sprinkling of sharp cheese. This sounds like a wacky mix of ingredients on paper, and not the sort that normally appeals to me but I was pleasantly surprised. It wasn't a flavor combination that worked for Marc so he gave me a bit of his portion and I was more than happy to oblige. 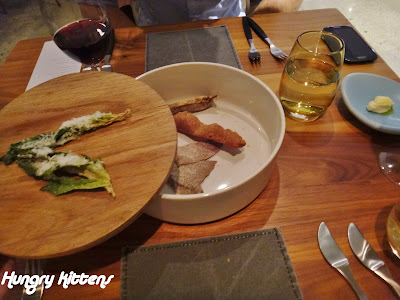 We went onto our cheese and crackers course; a twist on cheese and crackers. The baby gem and itchi bai was served on the lid of a container. When the lid was pulled off, it revealed a selection of crispy rye breads and puffed crackers. This was served with a soft smoked cheese. The smoked cheese had a gorgeous flavor and was easily spread over the crackers. I think we needed a wee bit more cheese for the amount of crackers present but then again maybe you're not supposed to devour all the crackers. We did though... After the crackers, we progresed to what I think of as the 'entrees'. The first of these was the mackeral sashimi with mustard green jus and soy. Again, I really enjoyed this dish. Marc and I order sashimi at every Japanese restaurant we go it. It's always awesome (as long as it's fresh) but it's always well, same same. I've never had mackeral in sashimi form and I imagine it has to be rediculously fresh to pull it off. The mustard green sauce had a tangy flavor and the salty soy balanced it nicely. 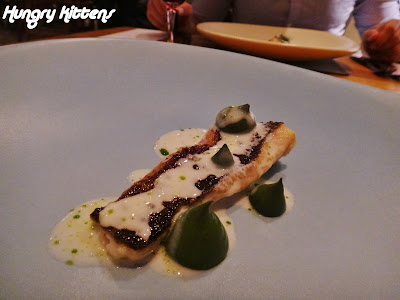 Our next course was murray cod cooked in buttermilk with parsley puree. The fish was absolutely beautiful. I gushed over how lovely it is to have fish cooked it milk. It was delicate and creamy, yet somehow retaining a lightness that would be lost by using acutal cream. The parsley puree was very strong and I found I only needed a little bit to compliment the fish. 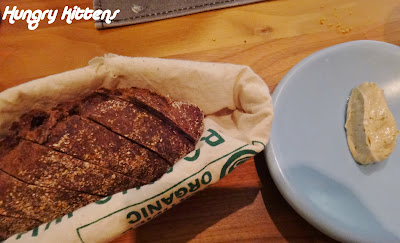 Before our mains, we were brought out some bread that wasn't on the menu. I can't recall the exact description but it was a dark loaf with a crunchy crust and soft interior. The bread was served with a honey butter and the combination of bread and butter made me think of picnics in the park. It made my brain go to dessert when it wasn't all that sweet. My brain likes being tricked like that. 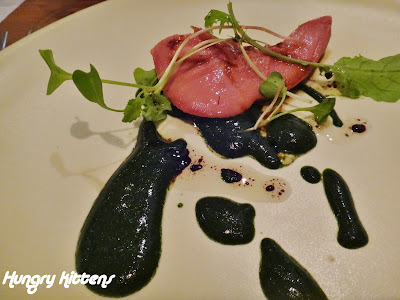 Our first main was brought out (unless the cod could be considered a 'main') and like the fish, the lamb was cooked perfectly. In fact, the meat was so... well, 'perfect' that it almost looked artificial. I've had cavolo nero only in its leafy form, never as a sauce so it was an interesting way to taste it. I don't think I would have guessed that as a component in the sauce if I hadn't read it off the menu. In any case, the lamb and sauce went well together and Marc's feedback was "I can eat lots and lots of this". 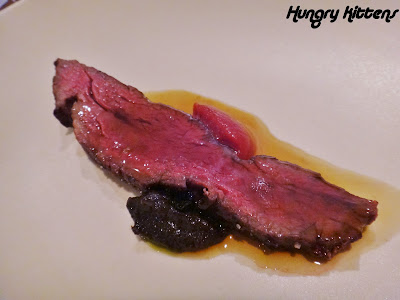 The final main course was the 'calotte', which Google tells me is a cut of steak. This steak was unreal. It was again, perfectly cooked (like all the other proteins) and mindblowingly tender and melty. The sides, described only as 'ketchup' and 'onion' added just a bit of punch to really bring out the steak. This course would probably be mine and Marc's favorite of the night. It's hard for me to choose one but I would pick this for the fact that it's simple: an amazing piece of meat treated well and complimented well, with just a tweak of innovation to mark it as exclusively Esquire. 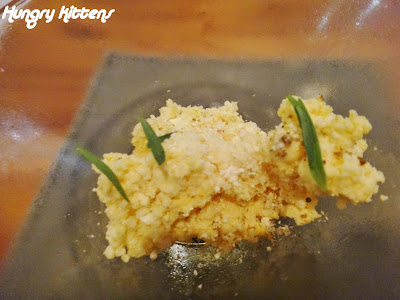 The course I was looking forward to most was the 'popcorn'. I love the buttered popcorn flavor of Jelly Bellys and I generally like any dessert with some element of savory (or savory dishes with an element of sweet). This was right up my alley. It comprised of popcorn granita with a popcorn dust, a taragon sauce on the bottom and fresh baby taragon leaves. The popcorn granita tasted just like popcorn, but cold (and not as difficult to get out of your teeth). The taragon flavors gave it a bit of oomph. I would say that this was a transition course, to move the palate from savory to sweet, since it was very much a bit of both. 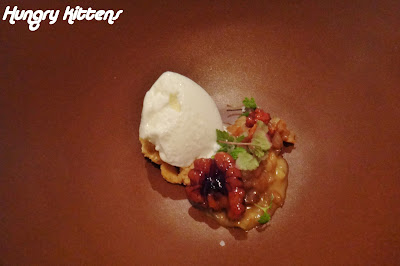 Our next dessert course had 'goat milk' in the description so Marc thought it would be my dream dessert. I used to eat goat's cheese daily and I still love the stuff but I've only tried it in dessert once (at Three Bistro) and it was not my cup of tea at all. Here, the goat is much more subtle and the texture was creamy and lovely. The candied walnuts keep this dish very obviously a dessert and the bed of pearl barley provide some interesting texture. 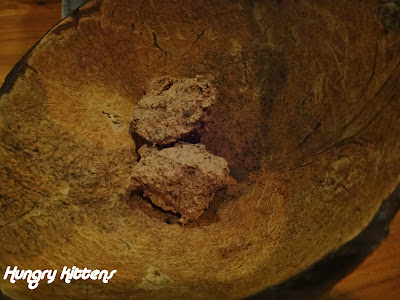 The coconut rocks were a lot like coconutty, dark chocolate truffles. They had a soft, almost short and crumbly texture, and none of the rediculous richness that real chocolate truffles have. I liked that they had a hit of bitter and weren't overwhelmingly sweet. These would have been great with a cup of coffee. 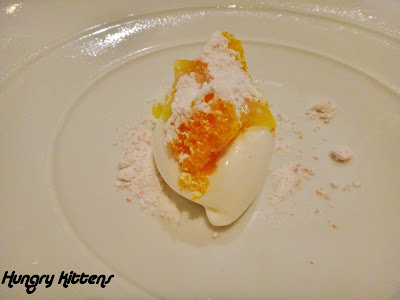 After what seemed like a degustation of desserts alone, we finally moved onto our last dish, which was another dessert! Marc did his boy thing and whinged there were too many dessert courses and he would have preferred one replaced with another main. We both noticed the lack of poutry so I concede a chicken/duck dish would have been welcome.

The final course was campari with curds and whey. I thought this seemed like a palate cleanser because it was sharp and tangy. The campari ice-cream and orange tasted overwhelmingly citrusy and the powdery stuff (curd and whey??) tingled on your tongue. Marc was reminded of sherbert. This dessert was still nice but I personally preferred the others. I think if I had this at any other restaurant, I would have liked it but Esquire had spoilt me after too may consecutive hits.

I thought Esquire was fabulous. It successfully brought out the theatrical aspect of degustation dining with a hint of molecular gastrony here and there but nothing too novel or rediculous. Most importantly, each course was delicious. My rule is that food can't be weird just for the sake of being weird, or innovative for the sake of being innovative. With the exception of the cheese and crackers (which I think crosses the line of innovation for the sake of it), each course was not only quirky and unusual but also a taste and textural delight. Marc might have thought some of the dishes were weird past his comfort level but I can honestly say that for my taste, everything I ate was an example of genius planning and execution.

Because everyone was following the same degustation plan, the courses were brought out at good timing intervals. I found myself trying to avoid seeing plates brought out to other tables because I didn't want the surprise ruined for me when we got our own dishes. I love it when dining out is not just for food but also the experience... but the food is also undeniably tasty. 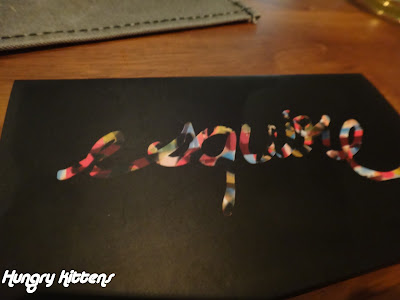 And to end things on a good note, we got a card of Esquire tempered chocolate to take home for the next day.