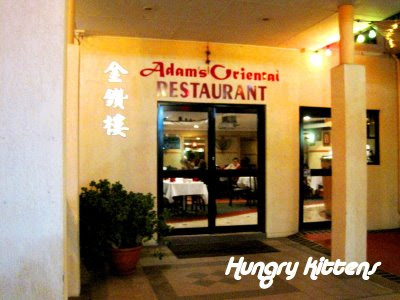 We're on the hunt for a good Singaporean chili crab dish. Ever since Charlie and I ordered the chili bug version at Obsession, I've been tracking the net for a proper crab version.

I did find out that Kingsley's on the riverside serve Singaporean chili mud crab. We phoned up and asked for the market price which at the moment is around $100. Well... I want crab but I might save that for a special occasion later down the track. 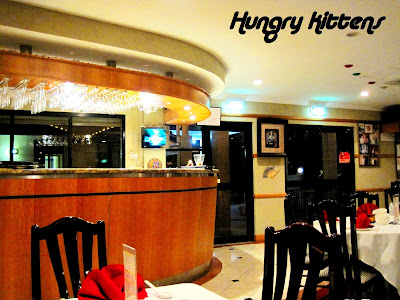 Today, we settled for another chili bug, or as Charlie has nicknamed the dish, Shili bug (Singapore + chili... yes, lame I know). I knew that Adam's Oriental did a 'Malay-style' bug which from the description, sounded a lot like the Singaporean style of cooking it. There were also heaps of other things on the menu that sounded appealing to me.

A friend of mine once had a group banquet meal at Adam's Oriental and she told me it was kind of average. That sort of put me off but I couldn't think of a better alternative so we gave it a go anyway.

The restaurant is located on a dark street (literally no street lights) in an isolated part of West End. It's isolated as in - no other restaurants near by. We thought we had driven up the wrong street until I spotted a sign in the distance and thought 'that looks like it could have Chinese writing on it'.

When we went in (weekday night), the place was pretty quiet. It's a small restaurant with its own parking but the dining area is quite pleasant. What I mean is it feels more like a restaurant than say, an eatery or cafeteria.

The menu is pretty extensive and there were more dishes that I wanted than I could order. We settled for three: the bugs, a red duck curry and Shan Dong chicken. 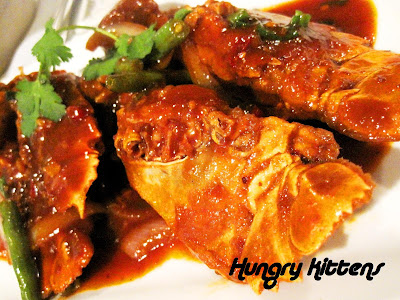 The food didn't take too long to get served. Our bugs and duck curry came first. I dug straight into the Malay-style bugs. They tasted wonderful - rich spicey tomato sauce that perfectly compliments the sweetness of the bug meat. My only hang-up is that bugs don't have a lot of meat!! I wanted MORE MORE MORE. 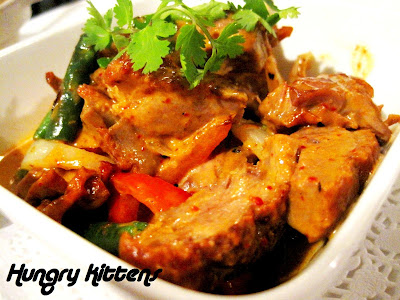 The duck curry was also lovely. It was rich, creamy and very flavorsome. There were quite a lot of duck pieces there too. Charlie pointed out that although the duck curry was perhaps the 'weakest' dish of the 3 that we chose (in that we have had awesome curries at other places too, so it's less of a standout), it was still delicious. 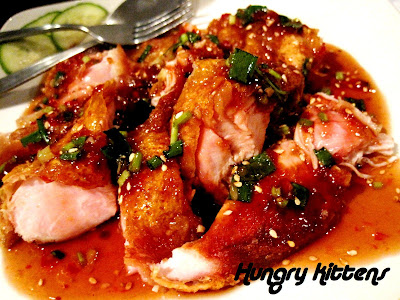 Just when I was beginning to forget about the chicken, it arrived. I had no idea what Shan Dong chicken was supposed to be. It's basically crispy skin chicken with a sweet, sour and chili sauce. This chicken was so good - I couldn't believe how crispy they got the skin! I picked up a piece that was drenched in sauce and thought 'here we go, this is gonna be all soggy' but it was still really crispy.

We were feeling really content at this point but I wanted something sweet to finish off an excellent meal. The 2 items we picked were for rarity value. I wanted a deep-fried ice cream but knew that I could get that elsewhere so instead, we ordered a deep-fried mars bar and a coconut cone with ice cream. 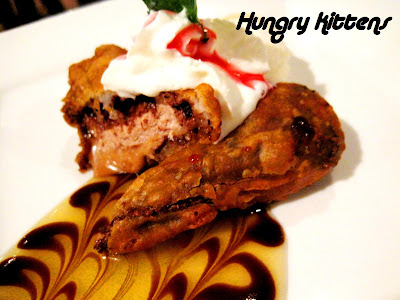 I've actually had 'tempura mars bar' before at a sushi train so I know how good they can be. This was better than the one I've had previously. I realize that I was basically eating heart attack on a plate but man, there is something sinfully good about chocolate coated in sweet batter, deep-fried and then covered in more chocolate, caramel and ice-cream. I love sweet food and in my eyes, there is just no such thing as too much. 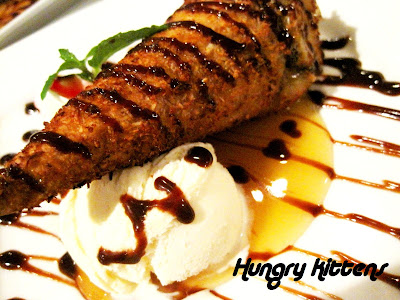 The coconut cone was a bit disappointing. I thought it was be crispy but it was sort of soggy - kinda like the batter part of a deep-fried ice cream after it's been sitting on the table for too long. That could be because I ate the mars bar first and then went to the cone... it might have been crunchy to begin with. Who knows.

Adam's Oriental was great. This was the best meal I've had in a long time. I thought that ordering 3 dishes + 2 dessert would have been over kill but we finished everything off and felt really satisfied. This translates to quite a costly feast but still, it was worth it. The service was just top notch and the restaurant wasn't loud and crowded when we were there. I would definitely go back.
Labels: Asian Restaurants, Casual Dining, CBD and Surroundings, Dining Out